Founded by Matthew Polk and George Klopfer in 1972, Polk Audio is headquartered in Baltimore, Maryland.

Polk Audio holds over 45 patents for advances in loudspeaker design and technology. Their products are distributed throughout the U.S. and Canada and in over 50 other countries. So, in other words, this is a big company.

Responding to consumer demand for higher performance bass, Polk Audio has been steadily improving its line of home theater subwoofers with high excursion drivers, bigger enclosures, slot porting, and powerful digital BASH amps. The 505 is second in size for the subwoofer line, with the PSW1000 being the largest.

The PSW505 is a bass reflex design, with a front-firing woofer and rear-firing slot vent. The slot vent is 12” wide, 1.25” high, and 13” deep, with a smoothed edge transition to the rear faceplate. The internal surface area of the slot vent is about 15 square inches; about the same as having two 3” round ports. A close-mic sweep of the woofer revealed an enclosure tuning frequency of 35 Hz.

The 12” driver features a huge foam surround, and a polymer composite cone with an inverted dust cap. The driver mounting plate is covered with a decorative rubberized foam strip, so I didn't attempt to remove the woofer.

The external dimensions, including the feet, grille, and amp controls, are approximately 16-1/8" high, 15-1/8" wide, and 18-3/16" deep. The sub weighs about 40 pounds uncrated. The MDF cabinet interior is a bit unique, using the top of the slot port for a horizontal brace, which in turn supports two vertical braces. Polyfill is stuffed between the two vertical braces. There are four hard plastic feet mounted on the bottom of the cabinet. I never heard any vibration from the feet, and the sub didn't wander on my hard laminate flooring.

The exterior is nicely finished in black wood grain vinyl, except for a black metal faceplate in the rear, and a silver painted smooth MDF faceplate in the front. The grille frame is made from injection molded plastic, and is attached to the cabinet with a plastic pin and rubber grommet arrangement. I was really struck by the impeccable fit and finish; I couldn't find any defects whatsoever. Polk Audio clearly takes pride in its workmanship.

The digital BASH amp is rated at 300 watts continuous, and 460 watts peak with program material. The control layout is logical, and the toggle switches and rotary knobs have a quality feel and smooth operation. All major amp plate penetrations are sealed with glue to prevent air leaks. The auto-on circuit was easy to initialize at low volumes. If no signal is present, there is a several minute delay before the amp shuts back off.

Setup: All objective tests were conducted with the microphone on the ground, facing the subwoofer, at a distance of 2 meters from the width and depth center point. The subwoofer was rotated so the driver and vent were both at a 45 degree angle to the microphone. I used the low level unfiltered input (which bypasses the low pass filter), and set the phase control to 1800 (this resulted in a non-inverted impulse response).

Peak Dynamic Output: This test measures how loud the subwoofer can play across its pass band with a short-duration signal representative of typical music and movie transients. Frequency response sweeps were conducted at progressively louder (2 dB increments) levels until dynamic compression was noted. The green curve (midle curve in the graph shown below) represents the maximum uncompressed dynamic output of the PSW505, with 105 dB at 70 Hz, and 95 dB at 30 Hz. The next higher curve (purple) showed dynamic compression, and the test was subsequently terminated.

Power Compression: This test measures how loud the subwoofer can play across its pass band with a longer duration signal. A sustained bass passage in an action movie can create excessive heat in the voice coil, reducing longer term output capability. Power compression was evaluated with a slow reverse sine sweep from 100 Hz down to 10 Hz. Sweeps were conducted at progressively louder (2 dB increments) levels until power compression was observed. The PSW505 held steady up to the purple curve in the graph shown below, with 102 dB at 70 Hz, and 93 dB at 30 Hz. The next higher curve (gold) showed power compression, and the test was subsequently terminated.

Total Harmonic Distortion (THD): Harmonic distortion occurs when multiples of the fundamental signal are produced due to non-linear driver behavior. A subwoofer with low THD will sound clean and distinct, especially at the deepest frequencies. THD was evaluated with sine waves (about 5 seconds duration), and was limited to approximately 10% unless otherwise noted. Clean output from the Polk was low in the 20 Hz - 25 Hz region, but it performed considerably better in the 32 Hz - 80 Hz regions.

Group Delay: A sufficiently large and abrupt phase shift may cause the perception of time smearing at the affected frequencies. Group delay is used to quantify this phenomenon, and was calculated from the phase response for select music notes. The approximate audibility thresholds are based on extrapolations of existing group delay audibility studies. Group delay from the Polk 505 remained below the approximate audibility thresholds at each tested frequency.

Impulse Response and Spectral Decay: The impulse response (black line) shows transient overshoot and system ringing for about 40 ms. Spectral decay was evaluated to the –35 dB mark, relative to the test volume. Several minor system resonances were noted in the 20-100 Hz bandwidth. The largest resonance dropped below the test floor after about 110 ms. 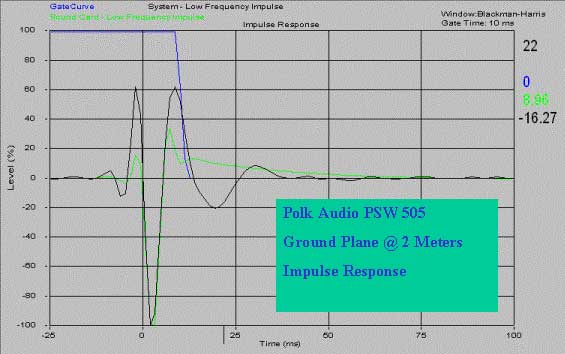 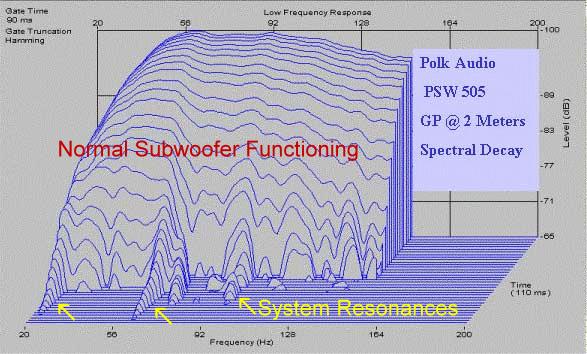 To simulate a typical user setup, the PSW505 was placed in the front left corner of my 2,000 ft3 home theater room. For digital bass management, all speakers were set to Small, with a crossover of 80 Hz. The in-room FR was measured at the primary listening position, about 11 feet from the subwoofer. The in-room FR sweeps were processed through the pre/pro with only the main speakers and the subwoofer operating. Setting the phase to 1800 provided the best results (00 resulted in obvious cancellation with the mains near 80 Hz).

As expected, room gain helped considerably to improve deep extension, with the Polk holding flat to about 25 Hz, and then dropping to –10 dB at 20 Hz. The response also showed a pronounced peak in the 55 Hz - 90 Hz region (orange-gold line in graph shown above). This peak is the combined result of room acoustics, asymmetrical filters in the digital bass management circuit, and the general shape of the quasi-anechoic FR (which also plateaus in the 55 Hz - 90 Hz region).

I switched to a filtered line-level input on the PSW505, and experimented with the low-pass filter in an attempt to eliminate the response peak. I obtained the best results (purple line in the graph shown above) with the filter set around 60 Hz, but I wasn't completely satisfied with the results, as I could still hear some noticeable mid-bass droning.

I decided to use my Rane PE-17 parametric equalizer to optimize the in-room response. Without much effort, I achieved an in-room FR of 23 Hz - 100 Hz ± 3 dB (green line in graph above).  The PSW505 now sounded much better, and I proceeded with the movie and music evaluations.

I selected The Day After Tomorrow for a more detailed demo. To set the playback level, I increased the master volume until the Polk started to exhibit audible artifacts on demanding passages, and then I backed off 2 dB. I measured SPL peaks at the listening position with a sound meter set to C-weighted fast and no correction factors.

The PSW505 generated some respectable sound pressure on the New York tidal wave scene, but missed the infrasonic undercurrent which makes this scene so gripping. The wave smashing into the building had good dynamics and extension. The ultra deep moody bass during the storm simulation scene proved too challenging for the PSW505, with cone cry and port chuffing evident. In fairness, very few subwoofers can play this demanding scene with complete justice, and the lack of masking noise makes it easy to hear any extension deficiencies or artifacts. The 505 added credible foundation to the underwater bus scene, omitting just a bit of the infrasonic decay after the ship stops moving. The pick-up collision was well played, with solid impact.

I evaluating the Polk on several music selections for balance, definition, pitch, and coherence. My overall subjective music ratings for the PSW505 are provided in the table below. Also provided below are some listening notes from a few CDs.

1) The Nightfly – Donald Fagan, Warner Brothers Records (1982) High Resolution DVD-A, 2002. I liked how the 505 handled this DVD. Bass guitar (even low E) and kick drum were well played with pleasing balance and tonality.

2) Gladiator Soundtrack - Hans Zimmer, Decca Records, 2000. I would have preferred more distinct separation of the deep, throbbing bass hits at the 6 minute mark of "Barbarian Horde". And the single deep note at the 8:57 mark only had average definition and pitch.  This challenging CD contains very deep bass (below 30 Hz) that few subwoofers can play with complete justice.

3) Wildflowers – Tom Petty, Warner Brothers Records, 1994. "Crawling Back To You" features a well recorded bass kick drum, and "It's Good To Be King" opens with some hard tom strikes. The 505 sounded good on both songs, exhibiting good tympanic character without much boom or overhang.

4) Los Lonely Boys - Or Music, LLC / Sony Music Entertainment, 2003. The 505 had no trouble handling the aggressive electric bass guitar work on this Latino rock CD, sounding natural with good distinction of notes and solid extension on low E (about 40 Hz).

The PSW505 is an attractive subwoofer with excellent fit and finish. I liked how the Polk performed on most popular music; it easily handled low E on the bass guitar, kick drum, and tom strikes. In my mid-size home theater room, the Polk belted out respectable sound pressure, and breezed through most mid-bass movie passages, only falling short on the very deepest (below 30 Hz) material. Overall though, I think the PSW505 stacks up well against its intended competition at nationwide retail chain stores.