Optimize Your WiFi Network to Stream Music Over AirPlay

Up NextHDR – Where Are We Now?
Eliminate dropouts when streaming music over AirPlay or other WiFi streaming technologies by following these steps.

With AirPlay you can easily stream music from your iDevices or computers running iTunes to Apple’s AirPort Express and AppleTV. Additionally, many AVRs, processors, and other audio components directly play AirPlay streams. See Secrets’ AirPlay tag for our coverage of audio components that support AirPlay streaming.

AirPlay is not only convenient and user-friendly, but also lossless. So music travels to every corner of your home network with all the fidelity of the original recording. That contrasts with lossy streaming technologies such as Bluetooth AptX. See Jim Clements’ Audioengine B1 review for more on AptX. While AirPlay is not the only lossless streaming technology around, it is the most pervasive.

AirPlay streams music with such fidelity and convenience that I have relied on it for 2-channel digital music for a decade. However, lossless streaming inherently requires higher bandwidth than lower-fidelity lossy streaming. Last year my wife and I moved into a new house, and we learned first-hand that streaming performance depends on the underlying network. AirPlay works fantastically downstairs, But AirPlay dropouts upstairs and on a balcony bedeviled us.

Our streaming chain uses all Apple components: Macs and iDevices to store music and control playback, an AirPort Time Capsule base station, and AirPort Express zone receivers. So I contacted an Apple product specialist to walk me through optimizing our network for AirPlay streaming.

This article uses Apple’s AirPort Utility and Wireless Diagnostics tools to optimize the WiFi network for AirPlay streaming. However, the underlying approach should improve music streaming in other ecosystems, and help users who use other networking tools. The Apple product specialist led me through a stepwise process that began with looking at router and zone receiver placement, and moved through zone receiver configuration, router WiFi broadcast mode, and finally to WiFi broadcast channel.

The Apple product specialist first asked me describe our WiFi network’s physical geography. I explained the AirPort Time Capsule base station sits diagonally across the house from the two AirPort Express zone receivers. Unfortunately, neither router nor streaming receivers could move significantly, so we didn’t experiment with alternative placement.

Then the Apple product specialist asked me how many WiFi networks my MacBook Pro detected in room. Our urban neighborhood has fairly small lots, so I expected to see quite a few networks around. I clicked on the WiFi icon in the menu bar, and started counting half-aloud. 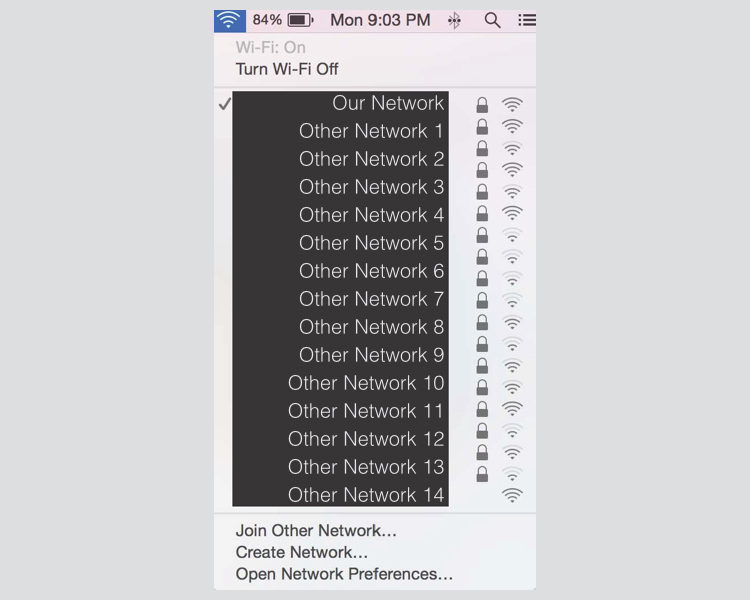 The Apple product specialist sighed audibly when my count hit the teens. He explained that network interference causes most AirPlay dropouts, because available spectrum is a zero-sum game. With so many competing networks around, our work was cut out for us!

The Apple product specialist then taught me a neat trick in OSX: hold down the Option key and click on the WiFi icon in the menu bar to see your wireless signal’s RSSI (Relative Signal Strength Indicator) and Noise. 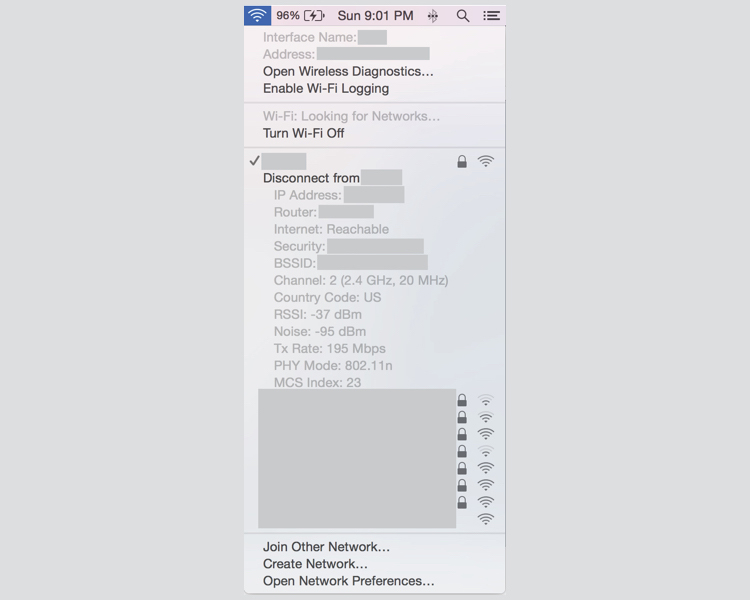 Subtract Noise from RSSI, and you get a signal to noise ratio (SNR). The Apple product specialist told me a 40dB SNR is excellent, while a sub-25dB SNR can cause AirPlay dropouts. Our SNR upstairs was 25dB on the nose, or marginal for AirPlay streaming.

Both AirPort Expresses were set to Join. The Apple product specialist suggested I switch one of them to Extend, and reboot it to effect the change.

This change increased SNR by 8dB! I then walked around the room streaming music from my MacBook Pro and…no dropouts! But we could still induce dropouts when streaming from an iPhone. So we tried putting the other AirPort Express in Extend mode as well. That just messed up everything everywhere, so we switched that one back to Join and rebooted it.

The Apple product specialist then suggested we switch the AirPort Expresses from 5GHz to 2.4GHz. He explained to me that the AirPort Time Capsule base station broadcasts over 2.4GHz and 5GHz bands simultaneously, and an AirPort Express can Join or Extend either one. Even though the 5GHz network and the 2.4GHz network can have different names, they are joined at the proverbial hip. Connecting to either network allows full access to the other networked devices on both frequency bands.

Initially I set up everything on 5GHz, assuming it was better. But the Apple product specialist told me that isn’t always the case. The 5GHz WiFi signal doesn’t always penetrate boundaries as well as the 2.4GHz signal. So in some circumstances the 2.4GHz band may offer better real-world performance. Furthermore, home construction strongly affects WiFi signal penetration through boundaries. Our house has plaster-and-lath walls. This method of construction is beautiful and durable, but less transparent to WiFi signal than newer drywall construction.

On this advice, I used AirPort Utility to switch both AirPort Express zone receivers to the 2.4GHz band, and rebooted them. SNR inside went up another 4dB. Performance on the balcony also improved, though we still observed some dropouts when streaming from an iPhone on the balcony.

Fortunately, the Apple product specialist had a final trick up his sleeve. OSX’s Wireless Diagnostics app includes a tool to scan wireless networks for the strongest channels. To access the Scan tool, hold Option and click on the WiFi menu bar. Then select Open Wireless Diagnostics.

After Wireless Diagnostics runs, go to “Window” in the menu bar and select “Scan” to access the Scan tool. 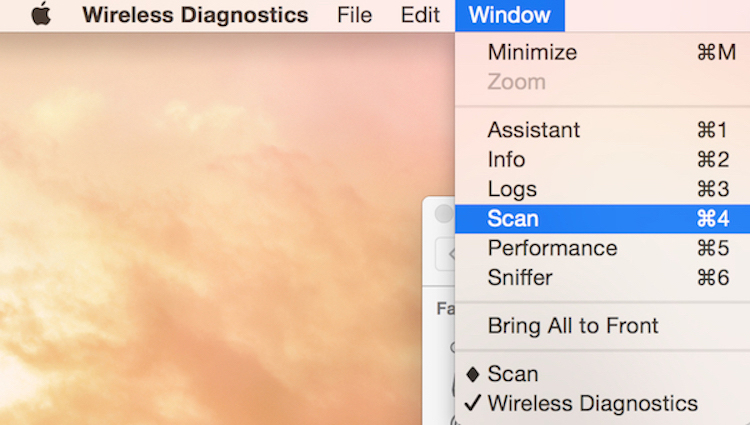 The AirPort Diagnostics Scan Tool has two panes. The left pane offers a summary of how many networks your computer “sees” and the two best channels for each frequency band. The right pane shows a list of wireless networks detected, with signal strength, noise, and broadcast channel for each one.

The Apple product specialist asked me to take my MacBook Pro onto the balcony, and click on “Scan Now” in the bottom-right corner of the AirPort Diagnostics Scan Tool. He explained that routers pick a channel when they start broadcasting, and don’t change channels until they’re rebooted, even though channel congestion can vary. But AirPort utility allows a user to force a router to lock onto a specific channel. This choice is in the Wireless Options menu under the Wireless tab.

To find the consistently best channel, we hit "Scan Now" several times over a few minutes. While the two best 2.4GHz channels changed a little each time, one channel usually popped up. Also, the right pane of the AirPort Diagnostics Scan Tool told us none of the networks around me broadcast on that channel. So the Apple product specialist advised me to go into AirPort Utility and force the AirPort Time Capsule base station to broadcast on that channel.

After I forced the AirPort Time Capsule base station’s 2.4GHz broadcast to lock onto that channel and rebooted the router…success! We could not induce a dropout when playing from the MacBook Pro or an iPhone, no matter where I stood or how I jiggled the iPhone. The Apple product specialist then recommended I scan every once in a while to see if another channel emerged as a better option, or if we started suffering dropouts again, and said goodbye.

After several weeks of extensive AirPlay use I am happy to report: problem solved! Due to the configuration changes the Apple product specialist walked me through, our network SNR is consistently around 37dB even on the balcony. That represents an improvement of more than 12dB! AirPlay streaming thus far is just as stable upstairs as on the hard-wired AppleTV in the living room. When I wake up, I can even stream NPR Morning Edition from the WABE app on my iPhone over any AirPort Express in the house without dropouts!

The Apple product specialist taught me that optimizing WiFi performance for streaming music is a lot like setting up speakers and subwoofers for smooth bass in a room: the only universal rule is, have a stepwise process to keep you sane. Within that process, try everything in order until something works! "Everything" in the process of integrating subwoofers for smooth bass is placement (if possible), relative levels, lowpass filters, delays and EQ. “Everything” in the context of stabilizing AirPlay performance is placement (if possible), Join/Extend, broadcast band, and broadcast channel. Should you also suffer from dropouts when streaming music, as we did, follow this process to once again enjoy uninterrupted streams of music in any room you choose.

Apple Support, Wi-Fi base stations: How to set up and configure AirPort Express for AirPlay and iTunes

Thanks to Apple for their assistance with this article.