Introduction to the Yamaha A-1020 Universal Blu-ray Player

The number of Universal Blu-ray players on the market continues to be strong, despite the much-discussed “death” of SACD and DVD-Audio formats. While no longer mainstream enough to be found at your local Best Buy or other big box retailer, SACD especially remains a thriving format in the audiophile market, with Mobile Fidelity, Analogue Productions, and more continually releasing new and remastered titles on the format. This thriving market has helped keep demand for universal players, like the Yamaha A-1020, strong for a number of years.

The A-1020 is a Universal Blu-ray player that handles virtually all disc formats you can throw at it. In addition to its Blu-ray and audio playback abilities, is has the ubiquitous Netflix support and integrated Wi-Fi for streaming the content. It sounds like a good package from the specs, but with the universal player market being so competitive it really has a lot of good competitors to deal with.

On the front, the BD-A1020 is a very normal looking player. Your main playback controls are available, as well as a USB slot for BD Live memory or media playback. The display is a segmented display, like what you see in an alarm clock, and not the dot matrix displays you typically see. On the back you’ll find a single HDMI output, component and composite video outputs, and a high quality set of stereo RCA outputs. There is no multichannel audio output, so despite being a universal player it won’t be the correct choice for a multichannel analog system.

The BD-A1020 does feature 802.11n as well as Ethernet for Internet connectivity, though only on the 2.4 GHz band for the wireless system. Online you can stream content from Netflix, Picasa, and YouTube, and being connected allows you to control it from your iOS or Android device as well. The analog audio outputs are fed by a 32-bit DAC that supports up to 192 kHz sample rates, making it capable of handing everything that DVD-Audio and Blu-ray can hold. The remote is a non-backlit one that unfortunately deviates from the common playback control layout. Every button is also around the same size and there are no tactile indicators on any of them, making nighttime usage a challenge.

Setup of the BD-A1020 was simple, with an interactive setup feature taking me through very quickly. Inside the menu system I found support for 4:2:2, 4:4:4 and RGB colorspaces, RGB Full in case you are using it with a computer display, and a Source Direct mode. Once the Wi-Fi was connected, I was set to start my evaluation.

The Yamaha A-1020 Universal Blu-ray Player In Use

The first thing that stands out with the BD-A1020 is its speed, or rather the lack of speed. From powering it on, to loading a disc and responding to remote inputs, the BD-A1020 feels slow the whole time. At a time when most players are moving to much faster processors to handle more online content and complex BD-J titles, the Yamaha feels a bit like its running on a chip from a year or two ago. This carries over to Netflix as well, which also takes a long time to load.

On playback of Blu-ray titles, the overall image looked quite good. There were no serious flaws that were immediately apparent, although a couple issues do arise in our bench tests later on. Menu navigation is a bit slow but does work fine, and overall the Blu-ray performance is good. While I’m sure many others would continue to discuss the Blu-ray playback in depth, it’s really something that is either right or wrong, and on the Yamaha it is almost entirely correct, with those exceptions discussed in the bench test section.

DVD playback is a bit more subjective compared to Blu-ray material. Resolution is good with wedges and other test pattern material, but on real content the image seems a bit soft and lacking in noise reduction. With the best Blu-ray players, up converted DVD content will still never be mistaken for native 1080p, but it can look much better than the original 480i source. On the Yamaha it just looks like a DVD, with that inherent softness in comparison to high definition material.

One of the key reasons that you would get the Yamaha is for its universal playback and the higher quality DAC inside of the machine. Listening to CDs and SACDs, the Yamaha sounds quite good. There was a nice depth to the soundstage, and the top end isn’t harsh and edgy as cheaper players often are. One curious issue is that the BD-A1020 has a habit of automatically turning itself off if it is not connected to an HDMI device. With a CD or DVD-A disc in the player and only using the analog outputs, but with nothing connected to HDMI, it would often turn on only to turn itself right back off. When I powered it up again it would remain on, but it was another annoyance that you wouldn’t expect in a player designed around analog outputs.

Netflix provides the regular and kid interface that now seems to be standard for everyone. There is no OSD to indicate what bit rate or quality level you are getting, or what type of audio track is present. Watching an episode of Arrested Development, there seems to be more macro blocking from a result of compression than there is on other recently players that have been tested. This might be due to a video processor that won’t process streaming video, but only works on disc playback. It could also be streaming at a lower resolution, but there is no way to tell on the Yamaha aside from what I can see.

In day-to-day use the Yamaha is marred by the slow performance of the player, and the lack of responsiveness. Most players have added faster and faster processors to keep up with more online content and demanding titles, but the Yamaha feels like it has a chipset that is at least a couple of years old in comparison. While the Blu-ray image looks generally fine on screen, streaming performance is poor, and DVD performance is merely adequate. Audio performance is good, but held back by issues I run into when using the player in an audio-only setup, and the remote is incredibly challenging to use at night. In use the Yamaha BD-A1020 was certainly not a player I looked forward to using.

The Yamaha A-1020 Universal Blu-ray Player On The Bench

Testing the BD-A1020 using our Secrets HDMI Benchmark, the BD-A1020 is perfect with 4:2:2 and 4:4:4 colorspaces, but has issues with RGB output. Looking at the image examples below, the correct output is on top and the Yamaha is on the bottom. You can see that the Yamaha rises out of shadows much slower than it should, and then it also reaches its peak output too early as well, compressing the dynamic range. Even if your display handles RGB better than YCbCr typically, no one should use RGB mode, as it results in a clearly inferior image. 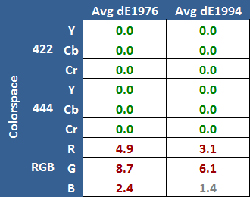 On our Blu-ray and DVD Benchmark, the Yamaha performs better but has a few issues. With mixed film and video content we get some clear combing artifacts as it locks onto one cadence and not both of them. Over HDMI a pixel is cropped on the left side of the screen, an error that shouldn’t happen anymore but still does. With the more basic tests jagged edges are smoothed well, but on more strenuous tests like the ship video on the Spears and Munsil disc there are jaggies that appear. Responsiveness, as noted earlier, is quite slow and disappointing for the price of the player. 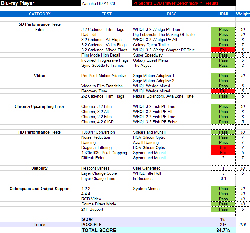 On the Blu-ray loading tests, these times are the slowest of any player tested in the last 18 months. It was very slow to power up and start loading a disc, and one it did begin to load the drive mechanism and the processor are both slow. The single most annoying speed issue was the time it took from leaving the setup screen to resuming a title. It was close to 10 seconds before the loading icon would appear on the screen, a gigantic delay in comparison to every other player on the market. 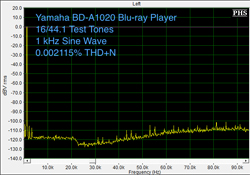 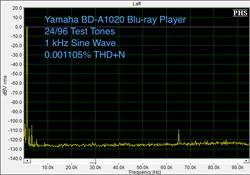 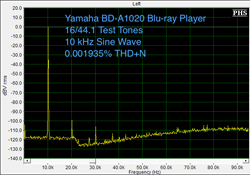 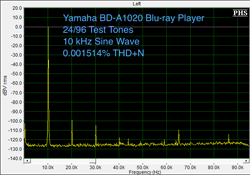 IMD performance with 60 Hz and 7000 Hz tones wasn’t as good, with IMD percentages of 0.0277% for CD Audio and 0.0285% for DVD-Audio. These numbers are still about what we see with similarly priced players like the Oppo BDP-103. 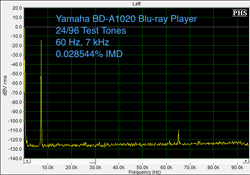 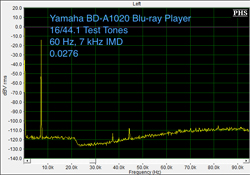 With 19 kHz and 20 kHz IMD tones, sidebands were almost invisible with CD Audio content but more prevalent on DVD-Audio tests. Of course these only show up on the DVD-Audio tests because the noise floor is lower than on CD Audio, so both really have the same IMD performance here. The errors are just hidden on the CD tests due to the higher noise floor. 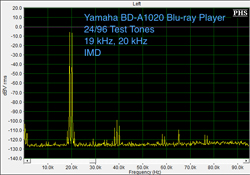 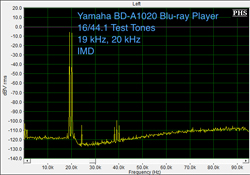 For audio tests, the Yamaha BD-A1020 does a very good job, with very low THD+N numbers and IMD results that are good as well. DVD-Audio exhibits a lower noise floor than CD as we would expect, but both have around 100dB of dynamic range and a very quiet background.

Conclusions about the Yamaha A-1020 Universal Blu-ray Player 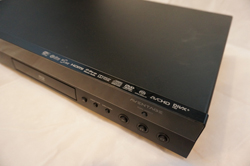 In a crowded space for Blu-ray players, the Yamaha BD-A1020 is unfortunately a disappointment. With a slow interface, only fair bench test performance, and troublesome quirks, it’s not a player I can recommend to you. For $50 more than its list price you can buy an Oppo BDP-103 that has superior performance all around, or you can spend $250 less and get a Sony BDP-S790 that is better in all areas except for DVD-Audio support.

The RGB bug is a big deal as this bug wasn’t present last year, and it affects both RGB modes. There is also a chroma alignment issue, where YCbCr are displayed incorrectly as the chroma and luma signals are misaligned by a half-pixel, causing an incorrect image on screen. It also has the slowest load times of any player I’ve used in over 18 months, far behind what Oppo and Sony can do now. While the audio output is good, it has a habit of turning itself off when used only for audio without an HDMI device connected, making it a poor choice for an audio setup.

Hopefully Yamaha can take the lessons learned from this and either update the firmware to fix many of these issues, or at least have an updated player for next year that once again competes well with the other universal Blu-ray players out there.