Sony was the inventor and chief advocate of Blu-ray and has probably put more players into homes than any other company with the PlayStation 3.  However when we ran a pair of their players through our HDMI Benchmark tests last year their performance left a lot to be desired.  Now with the BDP-S590 model that follows up their successful 570 and 580 models, will this past issue be fixed?

Design and Setup of the Sony BDP-S590 Blu-ray Player

The S590 continues the tradition of weighing less than the previous years model and has a new body style that curves down from the top.  Buttons on the front for power, eject, play and stop have moved from the front of the player to the top and I found that using them seems to cause a lot of flex in the plastic case.  The Eject button also didn’t work on my previously unused sample, so the new button design might not be as durable as before.

As with all players, the rear of the Sony lacks component video outputs, with HDMI being your only choice for HD video or lossless audio codecs.  There are both Optical and Coaxial digital outputs (Optical is to the left of the Java logo) for those with legacy receivers, but at best you will get two tracks of lossless audio with them.  There is built-in wireless with the S590 model, and connecting it to my wireless access point was a quick and easy process.

Setting up the S590 was fairly simple, with just selecting my resolution and colorspace for HDMI output, which is one nice benefit with HDMI.  Setting up access to online content wasn’t as streamlined however.  Using Netflix required me to use my email address and password, instead of the simpler “Activate Online” option that doesn’t require heavy input from a remote.  Before I could use Hulu Plus I had to register the S590 through Sony and tie it to my account, where I already had my Sony HDTV and S570 Blu-ray player registered. 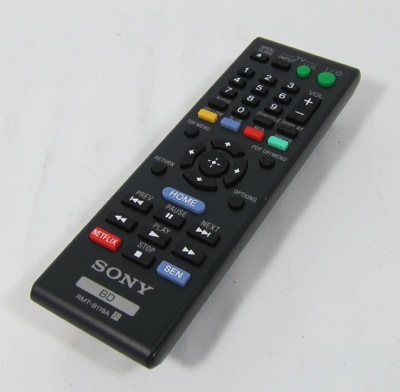 In theory this could be a nice benefit.  I register it on the site, it has all of my account information, and then I don’t have to deal with setup or can enter all of my credentials on a PC instead.  However after I registered the player, it just allowed me to then bring up Hulu Plus again and register my account there through the Hulu website.  Sony is insuring that you register your player, as you can’t get online without doing so, but not offering benefits to speed up the process beyond that.  This seems to be halfway there in implementation and execution, and hopefully they will make it easier to register all your accounts in the future.

Sony BDP-S590 Blu-ray Player In Use

Once I had my accounts setup I was ready for some movie watching.  Mission Impossible: Ghost Protocol had just come out and seemed like a nice test on Blu-ray.  One of the first things that I discovered is that unlike the S570, the S590 no longer includes built-in memory for BD Live, but requires a USB Memory Stick in the rear of the player.  I typically turn off BD Live to speed up load times on titles, but given that the price of 1 GB of flash memory for this has dropped to almost nothing, the lack of it built in was disappointing.  Watching the movie was not disappointing was the image from the S590 was clear and crisp, with no noticeable issues on cadence or detail.  Load times were also relatively quick, though on occasion the drive noise could be heard even when inside a cabinet.

Moving through a whole library of Disney and Pixar films (The Lion King, Lady and the Tramp, Cars) the S590 continued to perform well on playback with no issues to be seen.  Of course all Blu-ray players should do this well, though we do see some that cannot.  Moving onto streaming content I started out with Netflix, which has its own dedicated button on the remote.  Sony has moved from using a custom Netflix interface to using the standard Netflix one, which is a good change I think.  The S590 also supports 1080p resolution and Dolby Digital+ soundtracks so you get better quality audio and video than before.  One item I missed from last years model was an indicator of the current download speed, but there is an indicator for audio and picture quality.

My usual tests of Arrested Development and The Iron Giant looked good, with a quick start to streaming and a nice looking image.  With The Iron Giant, the horizontal panning was as good as I have seen with any Blu-ray player.  There was no tearing or stuttering, and the image was very nice and clean without blocking or other common artifacts.  For Netflix playback the Sony is much improved over the previous versions and one of the better players on the market.

After testing Netflix I moved onto Amazon On Demand, which has a large library for me to choose from as a Prime member.  I hadn’t had a chance to watch Downton Abbey yet, but it was available in HD from Amazon so it seemed like a great time to start.  While the picture itself looked quite good and streaming was fast, the motion was choppy and a little uneven.  It looked more like bad cadence detection does on a disc, but in this case it seemed to be a lack of enough buffer for streaming, or that the bitrate was too high to keep up with.  However everything else I watched from Amazon was great, with no motion issues or other problems, so it could very easily have been a network issue.  That is the problem with testing streaming content is that it is hard to isolate the issue.

Hulu Plus worked quite well, with quick, snappy navigation and clips that were quick to start.  Compared to the other players I have that I watch Hulu Plus on, performance seemed better than before, though the actual picture on screen looked the same as with those.  Vudu offered up very nice picture quality with its HDX feeds, but audio was not working when using an HDMI cable directly to a flat panel.  Once I played a second clip this problem vanished and didn’t come back again.

One new addition this year is the Sony Entertainment Network, which consolidates a lot of these online apps into a single location.  An issue with the prior Sony Blu-ray players has been there are too many apps and no good way to organize them.  Sony Entertainment Network (SEN for short) lets you setup a screen of your favorite apps to allow for quick access to them, which is easier than navigating a menu.  Unfortunately the SEN screen itself is slow to load, and navigating the apps to select them is both slow, and froze on me twice.  I think that SEN is a better way to browse the content available with the BDP-S590, but the interface might be faster with the better processor in the BDP-S790 player, and it might be better as the main interface instead of something you go to after the XMB interface.  I think it is a good first attempt with this, and perhaps with a firmware update or in new models next year it will be perfected.

Overall the Sony was a good player with Blu-ray titles and with most online content, and the Sony Entertainment Network shows a lot of progress but is not quite there yet.  Other than a hiccup with Vudu one time and one specific title in Amazon Instant Video, everything else looked very nice.

Update 7/30/2012: Sony has resolved the RGB bug in the BDP-S590 and it is now bit-perfect as well.  I will create an updated chart to reflect this in the near future.  I only tested Standard mode, however, as that was all that mattered for a bit-perfect image since the other modes clearly introduce issues.

After the HDMI Benchmark test of last year, I was anxious to get the BDP-S590 on the bench again to see how it scored.  The player supports YCbCr 4:2:2 and 4:4:4 modes, as well as RGB.  There are also 3 picture modes available: Standard, Theater Room, and Brighter Room.  The default was Standard, and that is what we are most concerned with, though in the chart below you will see that we scored all three.

The main take-away from this is that if you use Standard mode you are fine.  The Sony is bit-perfect on that data and will deliver as good a picture as any other bit-perfect player on progressive Blu-ray content.  Sony has resolved the issue that plagued earlier firmware revisions of the player and RGB and YCbCr content are now both perfect in the Standard output mode.

As an example of what the oter picture modes can do, here is YCbCr data for the Theater Room picture mode.  With Standard mode, these bands are identical on top and bottom, but with Theater Room we can see it is attempting to adjust the output gamma by lowering the Luminance (Y Channel) on top.  This will lead to a darker image with less dynamic range than Standard and should be avoided. 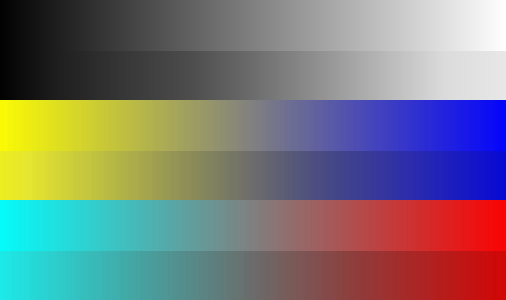 On our standard benchmark test, the Sony was an excellent performer.  Everything we threw at it was handled well with only a couple of exceptions.  The noise reduction settings made very little effect, if anything, on noisy test scenes and still get a fail.  Additionally it did well on the rotating needle test, but it did not do well on the ship scene on Spears and Munsil.  Responsiveness was good but not as good as the best players we have seen now.  It wasn’t a slow player; it just wasn’t lightning fast anymore. 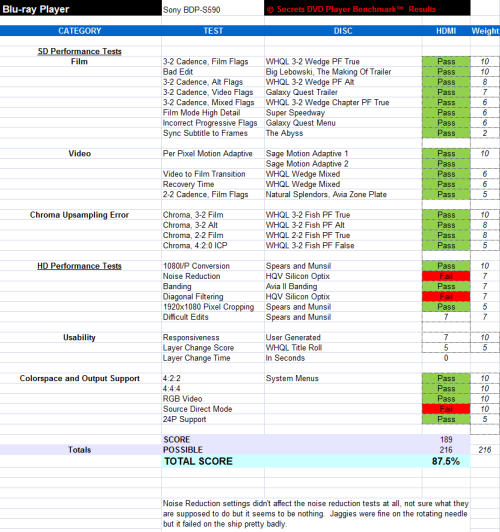 The Load Time Tests indicate that it is now the same speed at the BDP-S580 was which is still good.  The power on test was done without using the quick start mode, as that uses more power in standby.  Overall on the test scores the Sony does very well.

Looking just at test scores, the Sony is a very competent performer, but a couple things do bother me about it.  Even if it cost $20 more, I’d have liked to see a more solidly built chassis and integrated BD Live memory along with a quieter drive, though I certainly understand the need to be priced low in today’s market.

The new Sony Entertainment Network is a step in the right direction for organizing content, but is a little slow and prone to freezing, while the online registration method could be improved to integrate registering your streaming accounts to make setting it up easier.  In the end, however, streaming content looked very nice overall, Blu-ray playback was perfect in Standard mode, and load times were reasonably quick.  There is a whole lot to like overall about the Sony BDP-S590, and if you want SACD support it might cheapest way to get there and still have very good Blu-ray performance.