To me, the recipe for a winning Blu-ray player is very simple: Output Blu-ray content perfectly as it appears on the disc, do a good job with DVD content, and offer support for all of the major streaming options. Sure, you can get nice touches like dual HDMI outputs, SACD or DVD-Audio support, and other things, but those are just icing on the cake.

Last year, Sony’s Blu-ray players did a great job of hitting these goals. Their initial firmware had an issue decoding Blu-ray discs to RGB that we discovered, but that was quickly remedied and after that the players performed very well. Sony elected to keep the BDP-S790 at the top of their lineup this year, and it remains one of my favorite Blu-ray players, but the other models have been replaced. One new model is the BDP-S5100, which replaces the BDP-S590 model that I looked at in 2012. Has Sony kept with their winning model from last year, or have updates brought us changes?

Design and Setup of the Sony BDP-S5100 Blu-ray Player

Out of the box, the BDP-S5100 has a pretty striking design, with an angled top and a dark blue tint to the plastic finish. The back of the player is very minimalist with only HDMI, Ethernet, USB, and Coaxial ports on the rear. There is a front USB port hidden behind a cover, and buttons are placed on the top, which is a better location than the past few years. Since new Blu-ray players can’t output analog video, the lack of connections isn’t an issue, and it makes it easy to hook up even if the rear isn’t visible.

There are a couple issues I have with the design of the player. The tray has a bit of plastic on the front to make it close flush to the angled front, but the construction of it feels cheap, and I’m unsure if it would hold up to a heavy workload. I also am not a fan of the angled top, which prevents you from putting anything on top of the BDP-S5100. Even resting the remote or the case for the movie you are watching won’t work well. It looks really cool, and the blue-tinted finish looks great, I guess I just prefer the practical flat surface.

One item missing from the BDP-S5100 is any onboard BD-Live memory. What we took for granted years ago has now become a cost-saving cut, even as memory prices plummet. The included remote from Sony is nice and compact, with direct access buttons for Netflix and their Sony Entertainment Network. It isn’t backlit; so it’s harder to use in the dark. Sony has an iOS app you can use to control their player, but it mostly just mimics the remote.

One area that I still want to see Sony and others work on is streaming setup. With Sony, you can register your new player at their website, and connect some of your streaming accounts there. If you already have a Sony device, it copies over those existing accounts. However some services like Netflix and Vudu require you to enter your email address and password to login, while Amazon and Hulu require you to go to their website and enter a code they display on screen. The lack of a uniform experience is annoying, and entering in my full email address and really long passwords with a remote is excruciating. Did I mention that some of these services use QWERTY keyboards while some use an ABCDEF layout? Hopefully soon these will all work the same way, but it remains a hodge-podge version at the moment.

Setting up the Sony for movies is dead simple. Hook up an HDMI cable, pushing hard, as the HDMI jack is very tight, and then telling the setup instructions what resolution I want. After that, you’re ready to go.

The Sony BDP-S5100 Blu-ray Player In Use

Watching films on the Sony, its performance with Blu-ray material was as I expected. With any 24p film that I watched on it, which is probably what 98% of people watch on their players, it was great. Images looked wonderful, it was quick to load, and menus were nice and responsive. For general Blu-ray watching, it looks like any other well-designed Blu-ray player, as it should. When done right here, bits are bits, and there aren’t “deeper blacks” or “more pop” to be had from a correct image.

Most players now differentiate themselves through streaming, and the Sony has a very large selection of services to pull from. Their Sony Entertainment Network and Music Unlimited streaming give them one area to stand apart, though they are subscription based and not included for free with the player. I focused most of my attention on the streaming services that I use most often, and most readers probably use: Netflix, Hulu Plus, Vudu, and Amazon.

Netflix support is very good, with the same universal Netflix interface that we see from most companies now. There is the kid’s mode, which I love as a parent, but that adults can just bypass. One feature still missing, at least that I can find, is a “Start from Beginning” option with “Just for Kids” mode, which I’d like to see. Sony has support for the new SuperHD streaming from Netflix, though since Comcast does not, I can’t test it. It also will support 3D streams that Netflix plans to offer, and offers 5.1 audio for supported titles. It is nice and quick to start and buffer, and works quite well for Netflix streaming.

I’d avoided using Vudu in the past, but finally started redeeming UltraViolet codes, and now Vudu is essential to me. On the BDP-S5100, logging into Vudu is made clear and easy, which is nice as it is often hidden on some players. Titles in my UltraViolet catalog all play back great over wireless, streaming the HDX versions without a single hiccup or stutter. None of the streaming services ever gave out or stopped and buffered, even with higher bitrate content. The on-screen display for Vudu could be slightly faster, but it isn’t slow, and the image looks superb.

Amazon On Demand has had a redesign, with much larger and more colorful icons on the Sony than in the past. Browsing titles is quick and easy, and the larger images and icons make for a better experience. Watching Side By Side, buffering is quick, there isn’t a break at all in playback, and the image looks superb. Hulu Plus also does well, with the same interface that Sony uses on their previous players. Nothing on Hulu seems to have changed from before, so it’s still a custom Sony interface and not the standard Hulu one, but it still works well overall.

One thing Sony still needs to fix is their Apps interface. Some use custom Sony ones and some use the stock ones, and the login approach is different across them. You can’t remove them from the main home menu, and the Sony Entertainment Network screen is a small step forward, but reserves most of the screen for the proprietary Sony apps. They need to simplify the home screen, and let you remove apps you don’t use. They also could work on a quieter drive mechanism. The prior three models all have this issue as well, where sometimes a disc doesn’t sit well and it will spin incredibly loudly, being audible even when the film is playing. Overall, the BDP-S5100 handles Blu-ray discs and streaming quite well.

The Sony BDP-S5100 Blu-ray Player On The Bench

On our Benchmark, the Sony does very well with DVD content, only slipping up a little bit on the 3-2 Cadence with mixed flags, where it will drop sync occasionally. On the HD side, there are a few more issues that arose. Noise reduction doesn’t seem to do much of anything on our tests, and on the Ship video on Spears & Munsil some of the ropes will show a bit too much aliasing at times. It also has some combing in the mixed Film and Video scroll, and it only passes 1 of the Difficult Edits clips. The scaling test is a new test from Spears & Munsil V2, and it fails for both 480 and 720 resolutions, though every player fails this so far.

The Sony does very well on the DVD side of things, but worse on the Blu-ray side, and I’ve been moving the test to be more heavily weighted on Blu-ray performance, so overall scores will be dropping this year. For standard 24p films, like I mentioned before, you won’t notice this at all, which is why I say the Sony looks as good as any player in the In Use section. 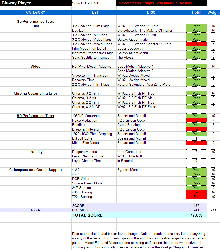 On our HDMI Benchmark, the issue with RGB from last year is now gone. YCbCr output is perfect, and RGB has very, very tiny errors that will not be visible at all, so use the one that your system supports best. 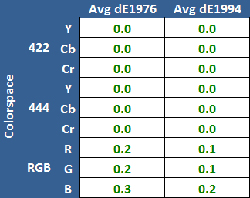 On our loading tests, the Sony is very fast compared to most players, falling just short of the best players. Where it comes up short is that it is slow to power on and start reading a disc, and the input feels a bit laggy sometimes. Compared to just a couple years ago, it is a good bit faster on average.

Overall, the Sony is a good performer on the bench tests. It’s a very good DVD machine, and it is pretty good at Blu-ray content, though if you are watching a standard 1080p24 encoded movie, it’ll look perfect. 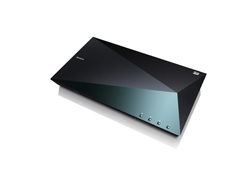 Sony didn’t go back and reinvent the Blu-ray player with the BDP-S5100. They stuck with their successful formula and have what is a minor upgrade to the BDP-S590 from last year. The new design certainly looks nice, though I do have a couple of reservations about it myself with the top surface and the disc tray. When it came down to performance, the BDP-S5100 does quite a good job overall. Load times were quick, standard Blu-ray 24p playback was perfect, and the color space issues I ran into last year have been banished. Also impressive is the WiFi design, as other players have issues in my upstairs media cabinet, but the BDP-S5100 does just fine.

The real downside on the BDP-S5100 in my use is the lack of cohesion. The interfaces of the apps are a hodge-podge where logins and controls work differently, and some use the Apps standard look and some have a custom Sony look. It makes for a confusing user experience as you navigate between different apps, and there still is no way to simplify the Home screen to have your favorite’s right there. It is very nice that Sony has a wide selection of apps, but please let me somehow hide the ones I don’t want.

For streaming content and playing back Blu-ray movies, the BDP-S5100 does a good job. It doesn’t have any faults that are showstoppers, which I can’t say about most Blu-ray players I see, and the overall performance is good. Hopefully Sony spends the next year working on refining the user experience of the player instead of adding features, as that is really what should be prioritized.