Sales figures for home theater components are not something I really pay attention to. I’d much rather own something that works great than to have what’s popular, or to have my opinion influenced by sales numbers. However, I’d be willing to bet that Panasonic has done pretty well with their 3D Blu-ray players this year because of one huge advantage they have over everyone else: The ability to include Avatar 3D for consumers.

While I’m sure this is enough for most consumers, as they want the single best title for showing off their new 3D TV and Blu-ray player, I would want to make sure that the player performance is up to snuff as well so I took a look at their entry-level model, the DMP-BDT210.

A quick look at the 210 reveals something that most of us haven’t seen before: a Blu-ray player with no component outputs. Now that component is limited to 480p there really isn’t much reason to include them, and it saves on both space and costs for the player. The rest of the back panel is pretty normal with HDMI, Ethernet, optical digital audio, composite and stereo audio jacks, and a USB jack. What is unique about the USB port in this case is that it can be paired with a compatible camera to work with Skype for teleconferencing on your home theater screen. Though I didn’t get a chance to try this out, the grandparents would have loved this feature when we had a baby a couple years ago. 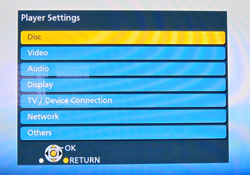 All of the controls for the 210 are hidden behind a drop down front panel, with the exception of power and eject buttons that are placed on the corners on top of the unit. This keeps the buttons nicely out-of-sight, but still easily accessible for use. Additionally the top of the unit features a touch free sensor to open and close of the disc drawer. This sensor can be disabled in the system menu, as in certain environments it can be more annoying than helpful. 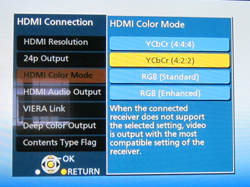 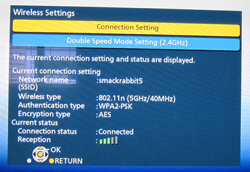 One nice feature that you can’t see, but I have to mention, is the dual band wireless that supports for 2.4 and 5 GHz frequencies, as well as 20 and 40 MHz bandwidth for those. If you have a recent router you can likely get better speeds with the Panasonic than you can with other players, which is potentially important for streaming content from the internet or your local network.

Setup of Blu-ray players is nice and simple now with HDMI being the only interface you can use. The hardest part of setting up any Blu-ray player now is entering my wireless security key with a remote, though going with Ethernet gets around that hassle. In the settings menu you will find support for all colorspaces (4:2:2, 4:4:4, RGB Standard and RGB Enhanced) though unfortunately no Source Direct mode is available. We will see how these colorspaces performed later in the Bench Test section.

Since Blu-ray players now serve the dual role of content server for online and local media, the 210 handles this task with its VieraCast menu. VieraCast includes all of the necessary online streaming services, with Hulu Plus, Netflix, Vudu, Amazon, YouTube, and more. The 210 remote even features a dedicated Netflix button to take you straight there.

The Panasonic DMP-BDT210 3D Blu-ray Player In Use

The first thing I noticed in using the 210 was the speed and responsiveness of the unit. Power on to the menus was very fast, and the menu system was quick and responsive. Starting up a Blu-ray was quick as well, as Cars loaded quick enough to keep my son happy. Once Cars started up, and it started up fast, the picture and sound were great with no issues at all. Other films that I watched, like the new Blu-ray of The Big Lebowski, looks and sounded as good as well as started up fast. For straight Blu-ray playback, the 210 was remarkably nice. 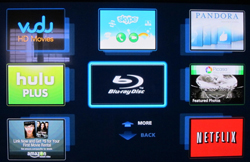 Moving onto the VieraCast lineup, the first thing I did was rearranging the apps into the order that I wanted. Having used a Sony Blu-ray player a lot for online content that has dozens of apps, but no way to order or delete them, this was a nice change. There are only a few online services I really use, and to have them all on the main page made using the device much easier. I went to Hulu and my normal test clips of Arrested Development played back perfectly and without pause. The wireless network and the buffering of the Panasonic were very good as I was able to use Hulu at all hours of the day, when often I find that at night I can run into jittery playback on my Sony player. The one issue with Hulu is that the Pause button doesn’t work, and you have to hit the Up arrow to bring up a menu to pause playback for some reason.

Netflix playback was also quite good on the 210. This is one of the few players out there that supports 5.1 Dolby Digital Plus audio with supported titles, which is a major improvement over the usual audio with Netflix. As more and more people turn to streaming content for movies, it’s good to see that the quality of streaming is finally starting to surpass DVD quality in both picture and audio, with hopefully Blu-ray quality coming in the future. Watching my usual test clip of The Iron Giant, picture quality was very good and the horizontal pans that give many players fits were very good with very little stuttering visible.

Other streaming services were similarly good. Vudu was quick on playback with no stuttering during any of the trailers that I watched, even in the high-bitrate HDX mode. Pandora did a nice job of streaming audio to the stereo for me, and YouTube had good playback and a quick, responsive interface, unlike many of the other Blu-ray players out there. Aside from the Pause button issue I had with Hulu Plus, I really had no problems at all with daily use of the 210 for watching movies or listening to music.

One feature on the 210 that is of interest to some is the audio modes. In addition to some remastering modes that I didn’t try out, there are some audio modes designed to mimic the response of listening to music on a tube-based system. The only other Blu-ray player I’m aware of that has audio modes that try to mimic the tube sound is the NuForce-modified Oppo 93 and that has had some nice reviews about it.

The different tube modes each had their own unique character to them, shrinking or expanding the soundstage, and adjusting the position and balance of instruments in the mix. Some would seem to bring a guitar forward, while moving vocals and drums to the rear, and others might do the opposite. If you like the effect that the effects have on the music, than you might enjoy listening to your music through the 210. I wasn’t a big fan of Mode 1, as it seemed to make everything sound thin, recessed, and small. However, some of the other modes had an effect on music that I found more pleasing, but it is all a matter of personal choice.

The Panasonic DMP-BDT210 3D Blu-ray Player On The Bench

On our standard Blu-ray Benchmark, the 210 performed very well overall. It did have some issues with 2:2 and mixed film and video content that would come up. Switching the progressive mode from Auto to Video would fix the mixed content, but would cause film content to no longer deinterlace correctly, and as this content often occurs during mostly film content, that meant that it failed. I also couldn’t get the noise reduction options to have any effect on mosquito or block noise with Blu-ray content.

On one of the CUE tests, using the Advanced Chroma feature would eliminate the noise that was clearly visible on the screen. However, using this feature causes the HDMI output to no longer be bit-perfect, so I can’t really recommend enabling this and therefore it failed this CUE test. The one surprise was a visible pause during the layer change test on a DVD, which often is not visible on Blu-ray players but was here. Overall the Panasonic did very well on the bench tests. 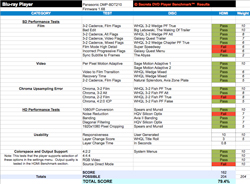 On our HDMI Bench Tests, I’m very happy to say that the Panasonic was perfect at 4:2:2, 4:4:4 and RGB colorspaces. The one note on this is that the picture options (found during playback by hitting the Display button, not in the main menus) must be in Standard mode, with Enhanced Chroma disabled. I must say I don’t understand why companies put these options in there, and separate them from the rest of the video option in the Setup screens. When any of these options were changed, the video that was being output was no longer correct.

They all affected the image in different ways, and I’ve attached the data for the RGB results for 3 different combinations so you can see, but only the Normal-Off resulted in correct data. On the chart you’ll see RGB data first, for the different picture and advance chroma options, and then YCbCr results for Normal Picture mode with Advanced Chroma Off. 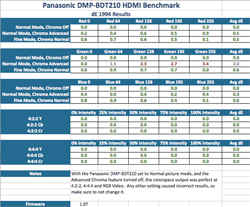 As before, we’d say if you want a picture with more punch or something else than a neutral Rec. 709 standard, to make those changes in your display and not have a source to output them incorrectly. I also wish that vendors would include better notes in the manual about what these modes actually do, instead of leaving the consumer to guess. The fact that modes on players called “Cinema”, “Movie”, or “Theater” are also always incorrect just leads to even more confusion, since the initial reaction would likely be to choose one of those modes if you have a dedicated theater room.

With our standard load time tests, the Panasonic is quicker than any other player I have used to date, including the Oppo player. I made sure to disable the Quick On feature as I don’t like devices to suck up extra power when they don’t need to, but it was still very quick and responsive from the Off state. 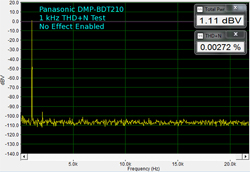 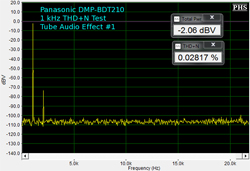 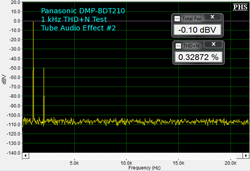 Here you can see the effect of the Tube Sound effects on a 1 kHz test tone. The response without the effects is pretty nice overall. 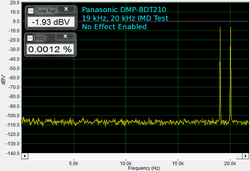 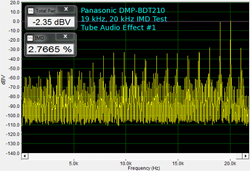 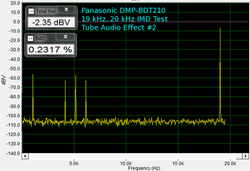 The IMD test is much more revealing. Tube 1 adds a lot of noise, and I found it to be very narrow and recessed in soundstage. Tube 2 sounds much different than 1, and closer to the regular sound, but still has it’s own character. I didn’t measure all six tube effects, but just a couple to give you an example of what it does. You can listen for yourself and decide what you think of it.

If you’ve read the whole review, or looked at the bench data, you can probably guess where I stand. While the benchmark player out there is still the Oppo 93/95, many people don’t want to spend $500 or more on a Blu-ray player. For people that want a Blu-ray player with correct colorspace decoding, great online content, and the best responsiveness of any player out there, the Panasonic 210 is a no brainer pick. It easily earns my recommendation, and you can show off Avatar 3D to your friends knowing that your player is fantastic as well.