It now seems our once indispensible couch assistant, the venerable remote control, has fallen out of favor. Previously impossible to live without, new options for controlling our TV and devices have sprung up to take its place. iOS and Android apps for our smartphones and tablets are ubiquitous, with every manufacturer having one now. Some devices have moved beyond that, with cameras and microphones to let you control it with actions and voice commands.

LG also falls into this category, shipping their Magic Remote with their high-end displays and Blu-ray players, including their high-end Blu-ray player for 2013, the BP730. Black and sleek in the hand, it works much like a Nintendo Wii controller, directing a cursor around the screen. Does this provide a break-through in control for streaming content and movie playback, or is it just a feature trying to distinguish itself from a pack of non-descript boxes?

Design and Setup of the LG BP730 Blu-ray Player

Sitting at the top of their Blu-ray lineup you expect the BP730 to exude some class and, with a slot loading tray and a silver top, it looks the part. It also feels like it, with a build quality that is much nicer than those on the tier below it. Controls are touch sensitive and positioned along the front. The clean lines of the design look nice atop my AV cabinet. The rear is minimal as with most players, offering just HDMI, Ethernet, and Optical connections. There is a lone USB port hidden behind a door on the front of the player. 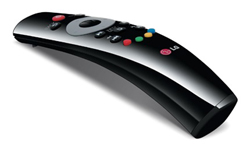 The real design element is the Magic Remote. Smooth, black, and well fitted to my hand it has a nice feel. All the controls are easily accessed with my thumb as it sits in my hand. Despite the nice feel of it, I do have a couple of quibbles with the design. One of the buttons that failed to make the cut was Eject. As I use it quite a bit from the remote, I wish it were still present. I also wish the playback controls were arranged in the more common layout, with Forward and Reverse to the sides of the Play/Pause button. The Magic Remote feels great in my hand but the button selection and placement could be improved.

Setup of the BP730 is simple and automated, with prompts to select the correct country, language, and output formats. The 24p menu selection is confusing as it asks you to choose between 60p and 24p playback. This may imply that you can only do either/or, instead of just enabling 24p playback for 1080p24 content. Rest assured, when you enabled 24p it only plays back 24p content at that rate and 60i content is still output at 60p.

A benefit of the Magic Remote is signing into all those blasted online apps. Entering my login credentials using a point-and-click method is easier than using a cursor and select button. I still prefer apps like Hulu that let you activate a player through your laptop instead of from the remote. This also makes it a nice way to search for content, as the same point-and-click functionality is more useful there than the cursor typically is. LG does sell an optional voice control Magic Remote that would make searching easier, but I didn’t test it.

LG also offers an app for your iOS or Android phones that will stream audio from the player directly to it. Useful for late night or in-bed movie watching, this only works with disc-based content and not with any streaming content.

The LG BP730 Blu-ray Player In Use

Once setup, the LG BP730 did a marvelous job with the Blu-ray content that I fed it. Movies that locked up on a previous LG player, like Nine Inch Nails Beside You In Time, played back flawlessly. The BP730 did a nice job with the 60i concert video with no deinterlacing artifacts to be found. Drive again looked wonderful, with the pop of the LA skyline and the amazing soundtrack proving as captivating as always. From action films like The Dark Knight to comedies like Admission, the LG BP730 did very well with Blu-ray content.

With streaming content the LG BP730 faltered a bit compared to other players. Where LG gets online content right is with their on screen interface. The menu system is clear and direct. It offers easy access to Blu-ray or local media playback, premium online content, their online apps, and settings. It is by far my favorite home screen of any Blu-ray player right now with a nice simplicity in the design. Once you leave it and start to watch online content, the experience goes downhill a little bit.

LG utilizes the standard app interfaces, so Netflix, Hulu and Vudu will all look like you expect them to. The let down is the response time that they offer. Netflix is the worst example, with onscreen elements like the keyboard and search windows being drawn much slower on-screen than with other players. The BP730 also seems slower to start playback of an HD Netflix signal and offer a slightly softer picture overall. Vudu HDX titles looked great, and Hulu played back quite well.

A larger disappointment is the absence of Amazon Instant Video. Free for those with Prime subscriptions, and home to exclusive content like Downtown Abbey, the lack of it is a big issue for the BP730. LG has promised imminent support for it but it still has yet to appear as I write this. LG offers plenty of other premium streaming features, including MLB, Rhapsody, and CinemaNow. Adding Amazon as well as Spotify would give the LG a more complete selection of streaming content.

While I am a fan of the feel of the Magic Remote in my hand, I’m not as big a fan with it in real world use. The on-screen cursor is often a distraction and there is no way to disable it. I’d be happy to use the directional pad and buttons exclusively, but the cursor keeps on appearing. There is also no dedicated Menu button, so going back to a Blu-ray or DVD menu requires pressing Info/Menu and then selecting the Menu option with the cursor. It seems fine the first few times, but gets annoying after a couple of weeks.

LG could also improve upon the Firmware Update process. If you attempt to update the firmware and there is a disc in the tray, it is ejected and you are returned to the home screen. Then you can navigate to do the Update process again, only to find there is no update available. Perhaps checking before ejecting the disc, and not dropping back to the home screen, would be an improvement.

Daily use of the BP730 is a real mixed bag. Blu-ray content plays back great and the home screen is the best designed one of any player out there today. Online content, however, suffers from a pokey interface and some apps that I consider essential are missing in action. The biggest issue for any user is going to be the Magic Remote. If you like it, then you’re set. If you are me, you’ll wish they also included the nice remote that comes with their BP530 player to complement it.

The LG BP730 Blu-ray Player On The Bench

Overall the LG BP730 does fairly well on the Blu-ray Benchmark, but there are a couple of exceptions. The largest issue, by far, is that edge enhancement is enabled by default. Watching the Ships scene on Spears & Munsil to look for jaggies, the presence of haloing around the ships cables is clear to see. Using a Custom mode and reducing the Sharpness to -3 removes this, but it should not be enabled by default.

On that same Ships video, the anti-aliasing of the BP730 wasn’t up to the level of better Blu-ray players with the cables. It did OK with the side of the ship but much worse with thinner, angled lines. Both of these issues were ones that I didn’t notice initially, but after testing I could not stop seeing them in real content.

For a higher end player like the BP730, I also like to see a Source Direct mode, and support for all colorspaces. For most of the testing for Blu-ray and DVD it does well, but those two issues that are present are pretty large. 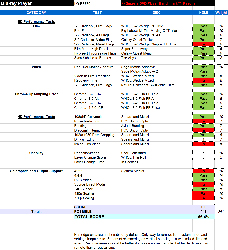 On our loading tests, the BP730 is among the quicker players this year. It is fast to load basic and complex discs. The Toy Story 3 score suffers a bit from the lack of a dedicated Menu button on the remote. It loads a bit quicker than indicated, but since it takes longer to bypass the trailers with the Magic Remote the score suffers.

Colorspace performance is not evaluated, as I no longer have access to the QD 882 HDMI Analyzer.

The biggest way that LG tries to set the BP730 apart is with the Magic Remote. In my use I find it to be wonderful ergonomically but not offering much benefit over a regular remote. I like having buttons I can quickly access to use, and missing the Menu and Eject buttons is a problem for me. Having the cursor usually doesn’t provide much benefit and there is no way to disable it. If it was only enabled for on-screen keyboards I would be happy with it, but not for just watching a movie.

I also find the absence of Amazon Instant Video hard to overlook. More and more people have Amazon Prime accounts and utilize the free streaming that subscription provides. There is also a lot of paid content people buy through Amazon and want to watch through their Blu-ray player, but can’t on the LG BP730. I have heard it is coming this week as I write this but have not seen it appear on my review unit yet.

Beyond those issues, I find the BP730 to be a nice Blu-ray player overall. The solid build quality reflects the price appropriately and the unit is quite pleasing to the eye. I would like a rear USB port to complement the front one, but those are less common these days.

What LG does nail in this year’s model is the main screen interface. Compared to some of the competition, it is worlds ahead. Simple, clean, and easy to find what you want to watch or listen to. Combined with the Blu-ray playback, it makes for a player that I can almost recommend to everyone. If the streaming performance after that main screen is as good as other players, then I’d say anyone that doesn’t need Amazon should look at it. Hopefully some of the issues I noted in this review will be corrected with a firmware update, making this LG player a good buy.