If you’ve ever wanted to try a bias light with your flat panel television or projection screen, Scenic Labs makes it easy and inexpensive with its LX1 Bias Lighting Kits. For less than $50, you can install up to six meters of color-correct bias lighting and control it with your phone over Wi-Fi. With an easy setup, you can improve your imaging in a few minutes for less than the price of an HDMI cable.

In the early days of my training with the Imaging Science Foundation (ISF), I learned about a concept called bias lighting. Video geeks will already know what I’m talking about but if you haven’t heard of it before, here’s a little primer. Bias lighting is a light source placed behind a television or projection screen. Ideally, it should be a neutral 6500K color temperature and it should be about 10 percent as bright as your display’s peak output level. If your TV is set to 150 nits, the bias light should be 15 nits.

When I first heard of this concept, the products were based on cold cathode fluorescent tubes, similar to the backlights found in LCD panels; this was in 2006. Bias lights were expensive and cumbersome to set up. And the light level was controlled by a shutter placed around the tube. I worked with a few of these systems in video postproduction environments and to say they were a pain would be to engage in understatement.

Today, we have cheap and plentiful LEDs which can be configured in a myriad of different ways. Color-correct LEDs are easy to find and all you really need is a way to control them. Scenic Labs has introduced its LX1 Bias Lighting Kits that consist of LED strips in one to six-meter lengths. You can add a dimmer option for just a few dollars more. To say these are a great value is another understatement. I received a six-meter strip for review along with a Wi-Fi controller. Total price – $48.90; now that’s impressive! Let’s take a look. 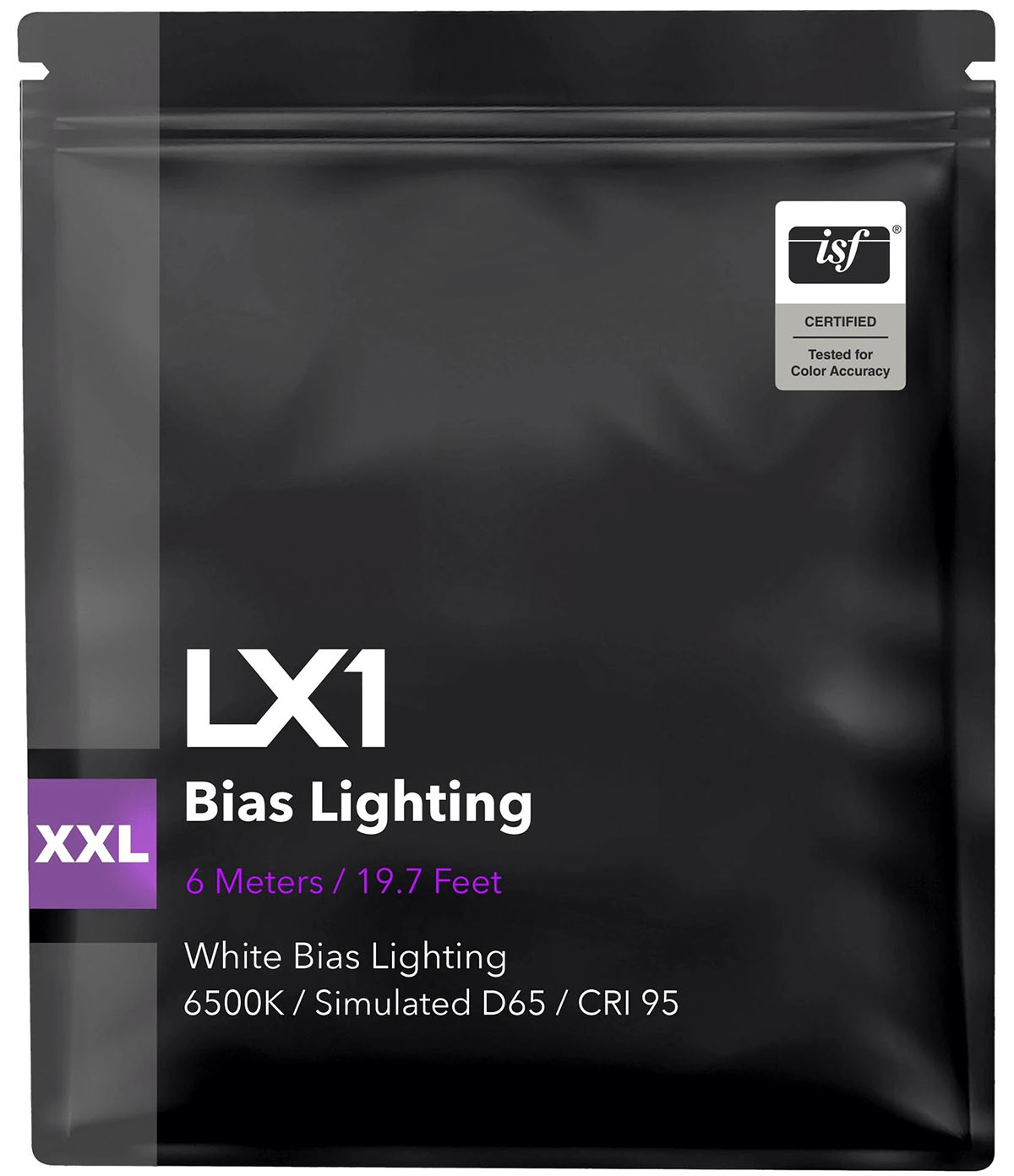 The concept of bias lighting is firmly rooted in science. It is designed to balance and improve your display’s image quality as it relates to the environment. We know that the best possible image comes from a light-controlled room. This is especially true for front projection, but a flat panel display also benefits when there is no ambient light present. The downside is that your eyes’ iris will open up to compensate for the darkness around the image. Not only can this create fatigue, but it also reduces your eyes’ focus depth and perception of contrast.

Using the example of a camera lens, when you close down its iris, depth of field increases, and the image becomes sharper. In a projector, closing down the lens iris raises contrast. The takeaway is that keeping your eyes’ iris small improves the perception of image quality. It looks sharper and has more depth.

How does one close their eyes’ iris while keeping the room dark? The answer is to place a light source behind the display. And to maintain proper light balance and color, the light needs to be the same color temperature as the image, 6500K. And the brightness should be 10% of the display’s peak output level. If your TV is set to 150 nits, the bias light should be 15 nits. 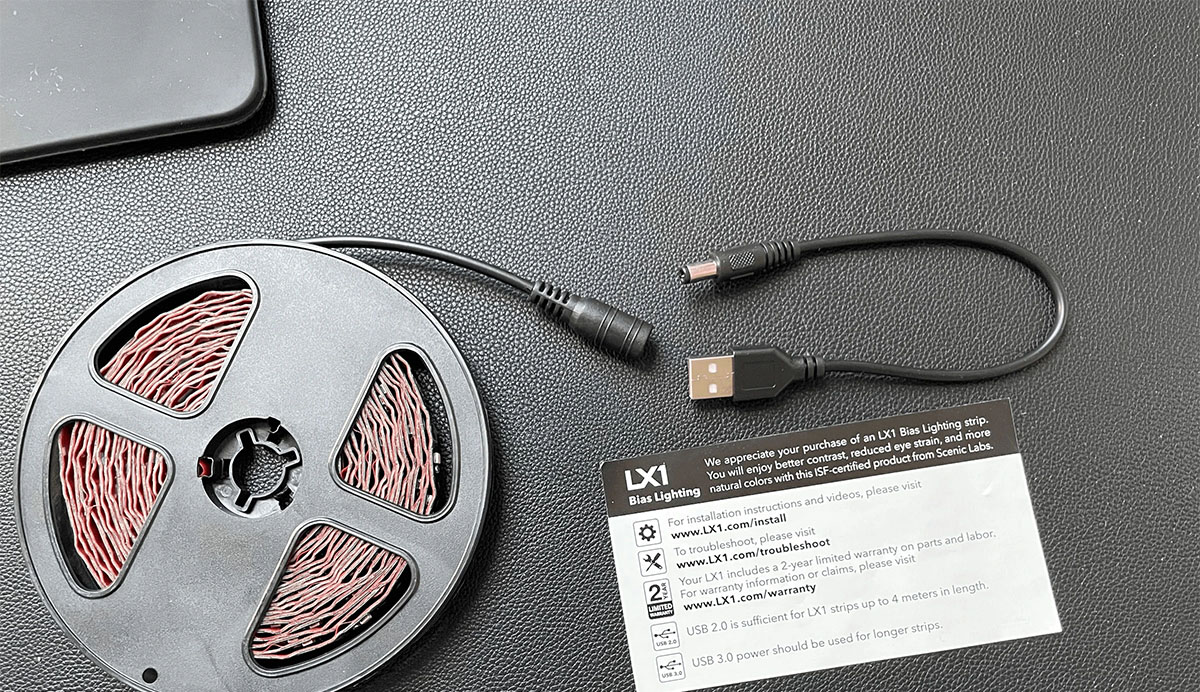 The Scenic Labs LX1 is a simple product. If you buy a complete kit, you get an LED strip, a short USB power dongle, and a dimmer. The dimmer is available as a manual button unit or one controlled by IR or Wi-Fi. I received the latter in the form of a tiny box about the size of a USB thumb drive. The LEDs were wound neatly around a plastic reel, six meters for my review sample.

For my purposes, I installed the LX1 behind a Stewart Filmscreen Luminesse. This is a rigid projection screen that mounts on the wall like a picture. It has a gap in the back and includes its own lighting system. I used a few bits of tape to secure the LX1 behind the screen about three inches in from the edge.

The LX1 is powered by USB. You can use version 2.0 for lengths up to four meters. 3.0 covers the six-meter strip I received. If your TV has a free USB port, you can plug the strip into it. The controller goes between the strip and the included USB dongle. If you want to plug into a conventional 120v outlet, you’ll need to source your own power supply. I used a spare charge block that came with an Apple iPad. Any wall wart with a USB port will do. 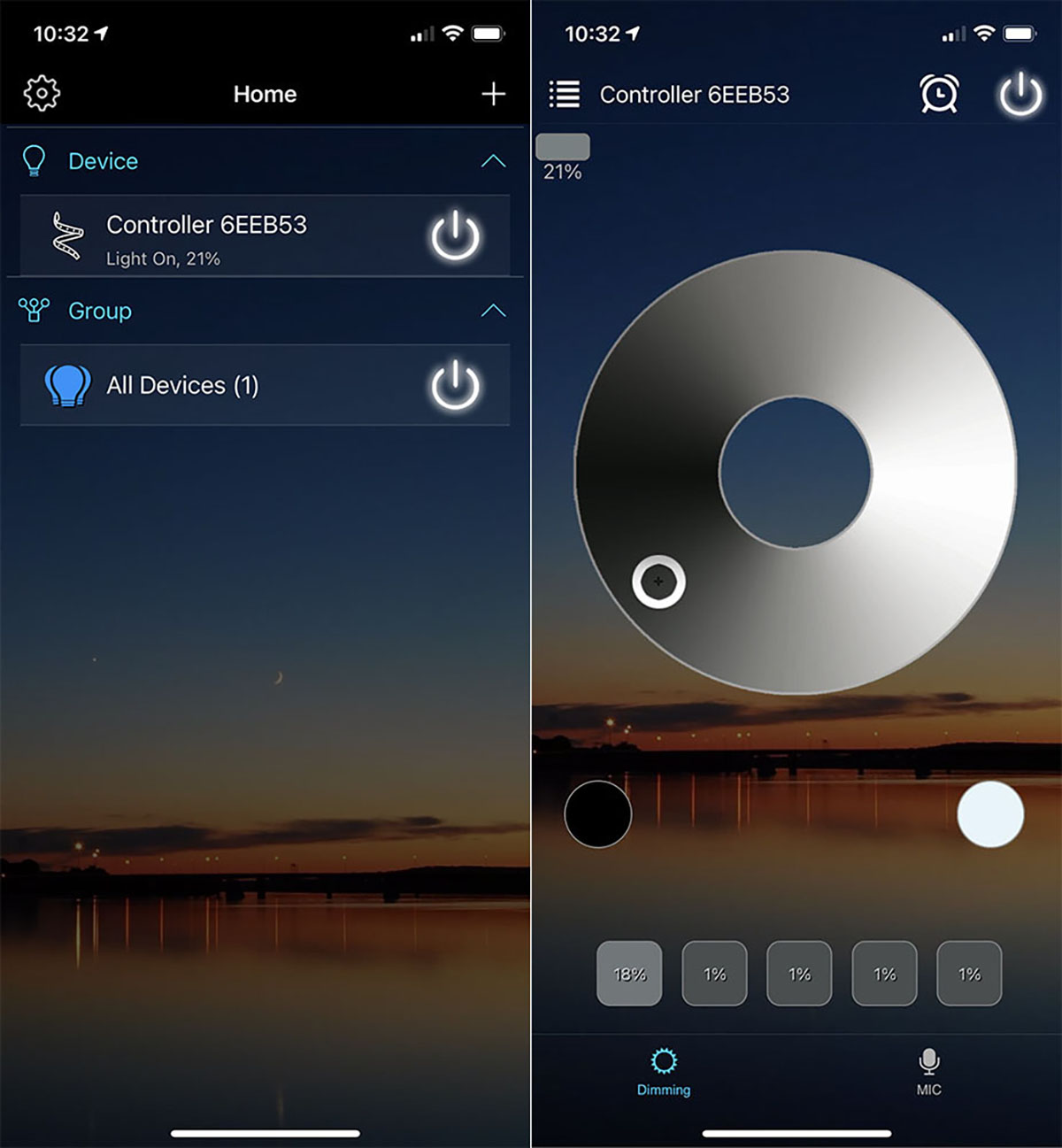 To link the Wi-Fi controller, I downloaded the Magic Home app which is free. It interfaces with many different products including the LX1 and lets you control them from your phone screen or by voice with Amazon Alexa and Google Assistant. Once connected to the Wi-Fi network, it presented me with a screen to set the brightness from 1-100% or to turn the lights off. It also offers five presets so you can jump right to a particular brightness setting.

Before getting to my viewing tests, I checked the color temperature of the LEDs with an i1 Pro spectrophotometer and an i1 Display Pro tri-stim colorimeter, connected to Calman Ultimate. Both instruments verified the LX1’s 6500K color temperature when I measured the LEDs directly.

If you’re concerned about your wall’s paint color affecting the bias light, you needn’t be. I asked Scenic Labs about this issue and was directed to their website blog where there is an article on the subject. In a nutshell, a neutral gray wall will provide the best backdrop for a bias light but walls of other colors won’t have a negative impact on the overall effect. 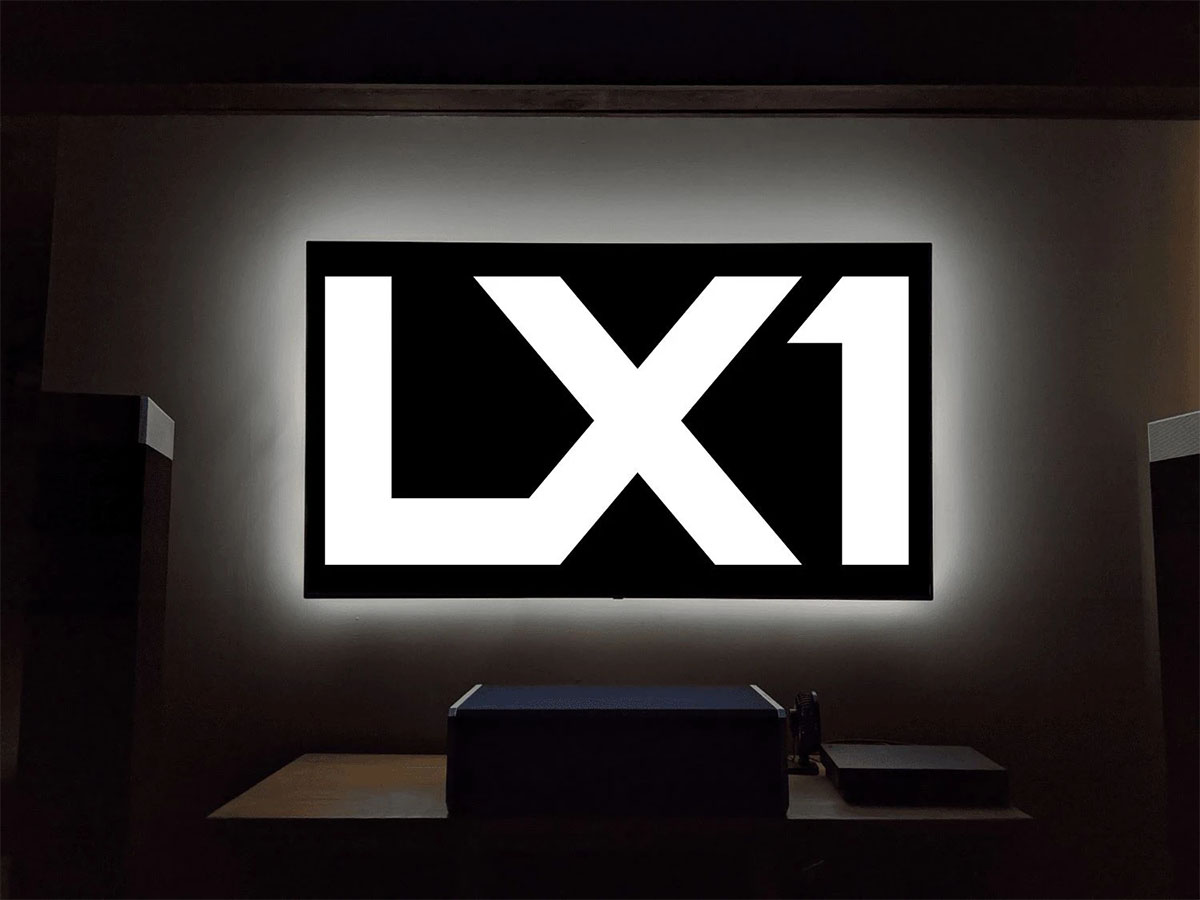 The wall where my screen is hung is painted flat black so the LX1’s light level has to be measured by its reflection from that wall. That translated to a value of 26% on the controller’s virtual wheel. I created a preset by long-pressing one of the five buttons at the bottom of the app screen. After that, I only needed to tap the power button in the app to turn the light on.

Though I don’t regularly use a bias light, the LX1 made me rethink that policy. Having it on during movies definitely made my eyes work less. I always watch in the dark, so the light increased my perception of contrast and made the picture seem clearer. It also made color appear more saturated after a time. I spent about eight hours total using the LX1 in my theater and my perception improved over that period. As I got more acclimated to the system, I enjoyed the picture more. 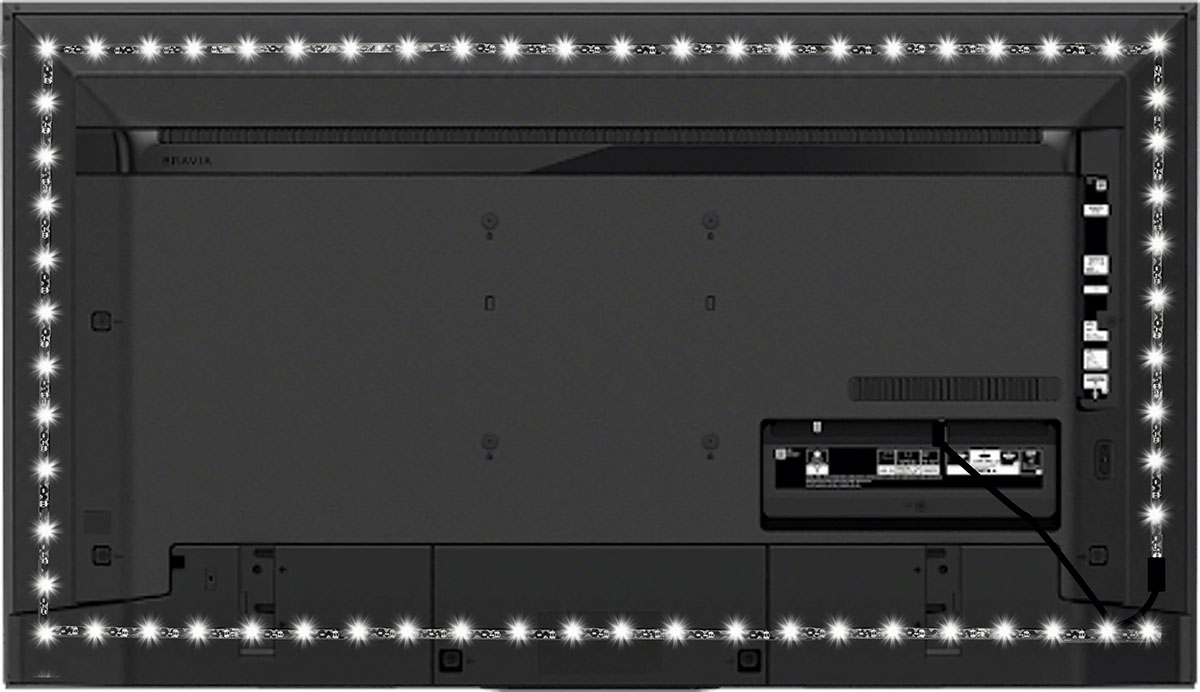 I also set up the light behind the 65-inch LG OLED panel in my living room. Here, the light level changes throughout the day. At night, I turn on two low-power table lamps. They light the room without reflecting on the screen. The LX1, set to 45%, offset the effect of the room’s soft and warm ambiance perfectly. It’s hard to imagine an OLED TV looking even more saturated and contrasty but the bias light had that effect. Here too, it required a bit of acclimation but after a few hours, I was very happy with what I saw.

The LX1 BIAS LIGHT KIT costs less than an HDMI cable but delivers a clear improvement to perceived image quality from TVs and projectors alike.

I cannot fault the LX1 Bias Lighting Kit in any way. For less than $50, you get a professional-quality bias light that’s easy to set up and control. I experienced only positives when watching movies in my theater or TV shows in the living room. Anyone with basic handyperson skills can install it in a short time. Brightness control with the Wi-Fi-based app is a breeze. And I doubt anyone would want to remove the lights once accustomed to them. It improves the viewing experience with enhanced image quality and lower eye fatigue; it’s a win-win. As far as tweaks go, it doesn’t get better than this. The Scenic Labs LX1 Bias Lighting Kit receives my Highest Recommendation.