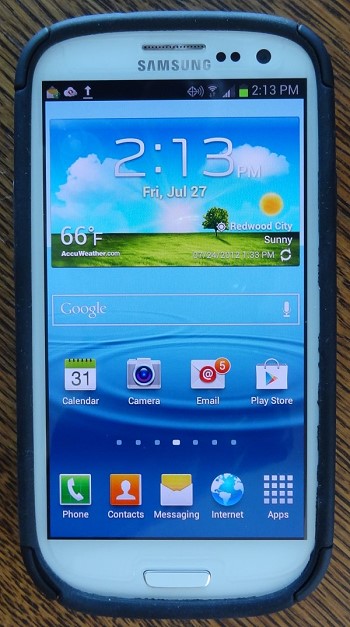 New models of Smartphones seem to be arriving on phone store shelves almost daily, and the Apple iPhone is feeling the snapping at their heels by the latest models from numerous companies. Samsung’s Galaxy S-III is definitely strong competition, and the iPhone has lost ground to Samsung with this model overseas. It remains to be seen if that occurs here in the US. Smartphones are a new category of product that Secrets will be reviewing, and you can take part. We are going to review them because they take full 1080p high definition videos that you can view on your HDTV via HDMI adapters that plug into the phone. No surround sound yet, but it wouldn’t surprise me to see such a feature within a year or so.

The Galaxy S-III is quite different than any Smartphone I have seen so far. Not so much in the apps, but in the size of the screen, which is 2.3″ wide x 4.2″ long. It is the biggest Smartphone I have ever seen, and I love this, because I have large hands.

It boots directly into the main screen, as shown in the photo. Clicking on the phone icon in the lower left takes it to the phone keypad, where you can direct dial or use your Contacts menu to select names you call often.

My previous phone used 3G, and I have to say that 4G is a noticeably better connection.

But, we are not here to talk about the features that work pretty much the same on all Smartphones. It is the camera and HD movie functions that will be reviewed.

The camera has a very small 8 megapixel sensor and a tiny lens. The previous model had a lens made by Leica, but Samsung changed to Sony for the lens on this camera.

Now, I am sure that most of you have a Smartphone by now, and you may be tempted to use it for all your photos and videos on vacation. Well, hold on a minute. Just because it has a 7 megapixel camera and does full 1080p doesn’t mean it takes great pictures . . . or does it? Our test results will give you the answer.

In Use and On the Bench

Shown below is a snapshot photo taken outdoors on a sunny day. This should illustrate the camera at its best. I have reduced the size here to 600 pixels wide. Click on the photo to see it at 1,000 pixels wide, and notice the telephone pole pointed out by the arrow. 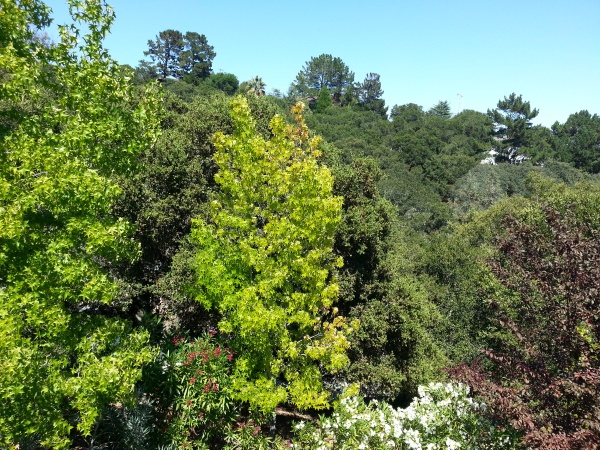 Below is a section of the photo near the telephone at 100% size reproduction. You can see that there are no halos or color fringing on the edges of the telephone pole. 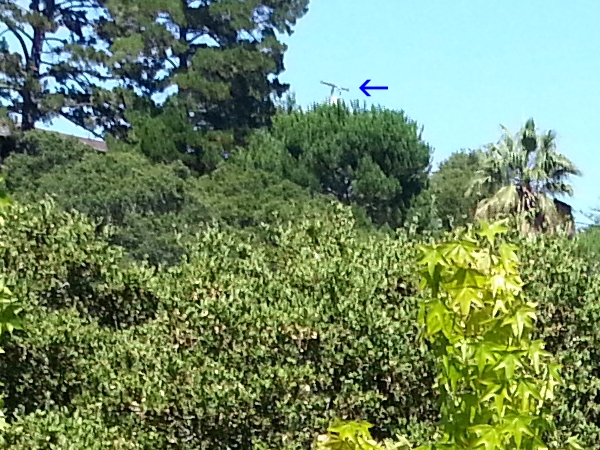 For comparison, a photo of the same scene, taken with a Sony DSC-HX9 (~ $330) point-and-shoot camera, at full wide angle, is shown below. You can see jpg artifacts near the edges of the telephone pole even though the photo was taken at the highest quality setting, and it has a 16 megapixel sensor, which reflects the larger size of the telephone pole. It’s not twice the size because the Sony has about 20% more field of view at the wide angle setting. Look also at the two bushes underneath the telephone pole. They are noticeably sharper in the Samsung Galaxy S-III photo. 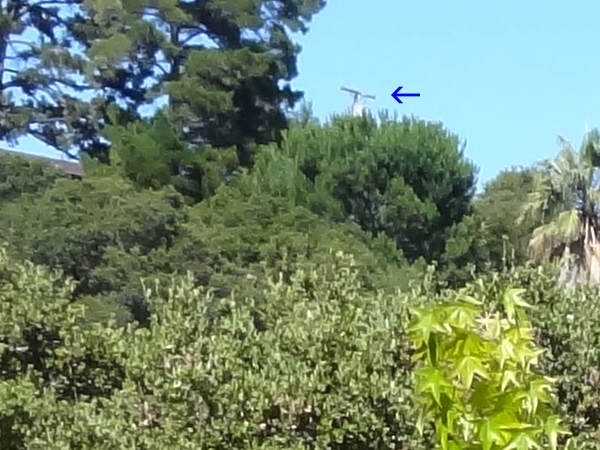 The Samsung takes panorama photographs, which seems to be a popular feature that a lot of camera companies are adding to their products. You select the panorama mode in the camera menu, then aim the camera at one side of the scene you wish to photograph, press the shutter button, and slowly pan across the scene. Here is an example (click on it to see a larger version). It does well outdoors, but if you are indoors where there is limited light, the slow shutter speed causes some blurring.

OK, so surprise, surprise, the Samsung Galaxy S-III Smartphone takes better snapshots than a dedicated – and highly regarded – model of a point-and-shoot camera.

Below is a graph showing the MTF-50 (50% contrast) of the Galaxy (click on the graph to see the full sized version). The upper graph, which shows the actual results, indicates an MTF-50 of 2,301 Line Widths per Picture Height (LW/PH), and the peak indicates substantial sharpening (the camera applies the sharpening to the image in the digital domain before saving it). The lower graph shows the corrected MTF-50 (calculated with no sharpening applied) to be 1,620 LW/PH at 0.332 Cycles per Pixel (Cy/Pxl). The theoretical resolution limit at MTF-50 for the 8 megapixel sensor in the Galaxy, which produces snapshot images at 1.33 aspect ratio, would be 2,448 LW/PH, and the theoretical limit of the (Cy/Pxl) is 0.50. The lower graph also shows two peaks above the Nyquist Frequency (0.5 Cy/Pxl), which means there is either none or very little low-pass filtering. Overall, very good performance. However, with a 1.33:1 aspect ratio, there will be some wasted print space if you take the JPG files to a 1 hour digital photo print store. The aspect ratio should be more compatible with commercial printing, i.e., 1.5:1 which would fit onto the standard 4″x 6″ format without cropping.

To review, MTF-50 is the Mean Transfer Function at 50% contrast. It has been chosen as the standard measurement for modern bench testing of cameras. Shown below is a diagram, illustrating what perfect 100% resolution of horizontal lines would look like (on the left), and what the image looks like through the lens when evaluated at MTF-50 (on the right). Note that this is just an approximation for illustration purposes. The point is, that the distinguishability of the white and black lines doesn’t suddenly jump to indistinguishability. It is a gradual decline, and 50% contrast (MTF-50) is the benchmark. A test pattern has lines that start out large, and through the lens, they look like the image on the left. As the lines get closer and closer together in the test pattern, they will reach a point where they look like the image on the right (through the lens), and at that point, there are X number of lines per picture height, which is the MTF-50 value.

Chromatic aberration area (CA) was 0.675 pixels, as shown in the graph below. Notice how far apart the red, green, and blue graph lines are in the peak. This is marginal performance.

Here is the MTF-50 resolution test. The actual MTF-50 was virtually identical with the corrected (calculated at no sharpening), which was 322.7 LW/PH at 0.144 Cy/Pxl. This would have been a reasonable result for a video camera 5 years ago, but for 2012, it is fair/poor, when you consider that the theoretical resolution is 1080 LW/PH, and several current video cameras come close to 1080. Also, there is no sharpening applied, and there is heavy low-pass filtering (the curve is near 0 above 0.5 Cy/Pxl), which reduces resolution.

The sound quality in the videos had good clarity, but of course, it is not stereo, and not as good as with the microphones on a dedicated video camera. The video files are MP4 format, and when I played them back on my computer, the image was about 1 second later than the sound (i.e., video not synchronized with the sound). The video tended to stutter as well, although this is affected by the video card.

P.S. If you would like to have your Smartphone tested for its photographic quality, click HERE and HERE to download two test patterns. Save them to your hard drive. Open each one in your graphics software, adjust the size of the image on your computer monitor so it is all black on the left side and white on the right side. Stand back about 10 feet from your computer monitor and take a photograph with the monitor in the center of the picture with the camera tilted so that the vertical is about 15° to the right. (See example shown below.) Depending on the lighting behind your computer, one of the two test patterns should be usable for the test. For the best results, the room should have about the same lighting conditions as the brightness of your computer monitor’s screen. Send the original image files to me by e-mail (jej at hometheaterhifi dot com), along with the brand and model number of your Smartphone, and when you purchased it. 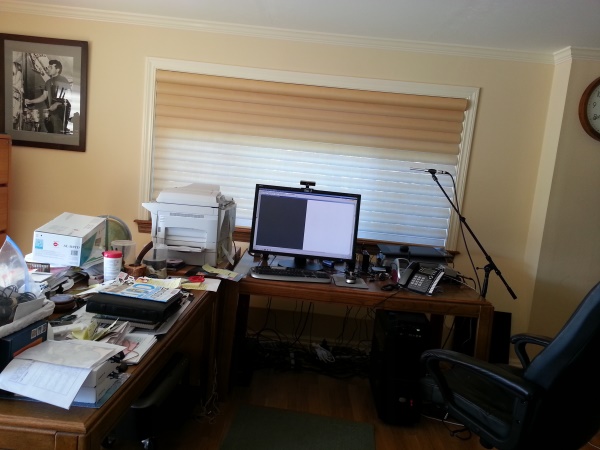