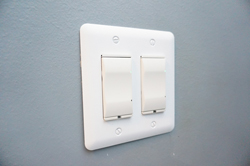 When I finished my initial review of Control4 I had it controlling my AV system but nothing else. As complete home integration is one of the reasons to use Control4 I needed to test something out. Control4 was nice enough to send over a few light dimmers to install so that I can see how they integrate.

Looking around our rental house, I picked where to install these dimmers to integrate with the TV and main floor. I want the outdoor light to be automatically turned on and off based on the sun. I also want the lights in the living room to turn off when I start a movie. Finally I also wanted the stairway to be able to dim at night after the kids are asleep. I determined the components I needed, a few dimmers and a keypad, and put in my order.

Upon their arrival my father-in-law, who unlike me knows what he is doing here, came over to help with the install. At this point everything fell apart. Our house was built in 1942 with a lot of old, ungrounded wiring. It’s been spliced multiple times and nothing works like you expect it to. After wiring up a switched outlet we were stuck. Every configuration we tried didn’t work correctly as the wiring is such a mess. Defeated, and not waiting to hire an electrician for a rental house, we started over.

The basement for the house was renovated in the past few years and all the wiring is new. It also contains the larger home theater and my wife’s office. This gave us a new approach: Installing dimmers for the lights downstairs and a keypad at the top of the stairwell. Now before going downstairs you can turn on the light that you want. No more going down into the dark, virtually windowless basement at night.

Installing these is quick and easy when the wiring is current. It took under 2 hours for everything, including a 3-way switch that had to be bypassed. Identifying the dimmers in the Control4 software is fast and easy. Configuring the keypad to control the dimmers took just a couple of minutes as well. Now that the lights worked the fun part was here: programming.

Upstairs in my AV system I had a single switched outlet to control. This has the main light in this room and I wanted to set it up a few different ways:

The first one is easy. I told the Control4 software that once it hits 6 AM; turn the light on to 100%. Now when one of my kids wakes me up I go downstairs to a lit living room. 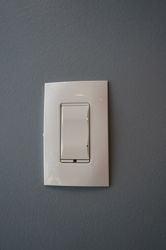 Turning off the light for a movie is easy as well. If I select the activity Blu-ray and the light is on, it turns off. I initially tried to just dim it to 20% but found myself turning it off 90% of the time anyway. Now I just need to automate the shade across from the TV to lower during a movie if it is up.

To listen up my music, I went with a current favorite: Daft Punk’s Random Access Memories. I added the album to a custom playlist called “Living Room Dimmer” to make future changes easy. Then I set a double-tap of the top button to turn on my playlist. No more reaching for the remote to put on music in the background, just hit the light dimmer. It also makes my 3-year-old happy that he can listen to Daft Punk all the time.

Turning everything off is just as easy. I set a double-tap down to turn off the AV system. Setting that up took just a minute inside the Control4 software. Triple-tapping it will turn off the AV system, the floor lamp, and all the lights in the basement. Now when I leave the house I triple-tap the dimmer and everything happens. It’s also great at night to turn off all the lights before going up to bed.

Downstairs has less automation, with just a double-tap on the keypad to turn all the lights off. Once another Control4 controller is integrated into the main AV system it will dim the lights when the projector turns on and slightly raise them when paused. I can also automate the lights to have a random schedule when I am out of town to provide the illusion of an occupied house. 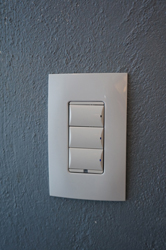 As I add more lighting control I will find more I can do with it. Right now it’s made a few tasks easier and some common tasks have been automated. Two more dimmers in the basement and every room there can be controlled by a single keypad.

My main issue with the Control4 system is the integration with my Roku3. The included IR driver worked, but not well. Pressing left on the remote is often missed and the responsiveness is seriously lacking. I wound up using other devices like my Blu-ray player for Netflix instead.

Fortunately other companies beyond Control4 provide hardware drivers. One company is Extra Vegetables that has their own IP-driver for the Roku products. By using IP control instead of IR control the communications are more robust and more commands can be sent. They provided me a copy of their driver to see if it would improve upon my system.

Did it ever. Now the Roku responds perfectly and instantly to commands. My favorite channels can be launched with a single button press. Removing an IR emitter has made my wiring cleaner and the Roku has gotten near daily use. A good driver can make the difference between being frustrated and being totally happy. More and more companies are writing and shipping their own drivers, and providing IP control, making future equipment work even better with a Control4 system.

Growing my Control4 system has let me move from AV automation to home automation. Next I’ll probably add in a wireless doorbell that will alert me in the basement when someone is at the door. Far too often I miss deliveries, unable to hear the door knocks over the components I am reviewing. However, Control4 just announced automation with the Nest thermostat at the CEDIA Expo. Now I have a reason to add that to my house and see how well they can play together.