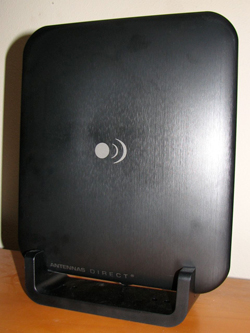 A recent search on DTV stations in the San Francisco Bay Area brought me to this site.

The site listed all the channels within 100 miles of San Francisco. The list was long. Many transmitter locations were far away, so I was not going to receive all the channels. But still, the count was healthy. The site even listed several stations that are not broadcasting yet, but had either applied for or had received approval by the FCC.

The large channel count is the result of an allowance in the ATSC specification for terrestrial DTV to have sub-channels. Channel 42 in my area, for example, shows up with 15 SD sub-channels, 3 of which are audio only. The decision of whether to multicast channels is left to each station. Many stations enticed by the potential for an additional revenue stream, have embraced this option, choosing to multicast one or more channels.

Multiplexing channels is not without consequence, however. These additional channels now dip into the bit budget, meaning fewer bits for each channel. Stations often partition the bandwidth differently between these sub-channels to provide better quality on preferred sub-channels.

The ClearStream Micron Antenna is designed for those hard to reach stations.

At home, I am able to receive about 70 terrestrial DTV channels (count includes all the sub-channels). Though only a small fraction of these channels are of interest to me, receiving them incurs no recurring cost. Also, should your satellite or cable provider blackout a broadcast channel after reaching an impasse over contract negotiations with a station, one can resort to the corresponding terrestrial DTV channel. This happened to me many years ago with DISH network; the company even offered their subscribers an antenna to receive terrestrial DTV after the channel got blacked out. Contract negotiations continued and the channel eventually returned to the lineup. As I was writing this review, this story repeated between News Corp. and Cablevision System Corp. in New York; the two companies eventually reached an agreement over retransmission fees.

Antenna Direct’s sales data indicates that close to 50% of the 114 million TV-watching households are using an antenna to either supplement pay TV on the primary television in the home, or to get reception on secondary TV’s in the home which are not hooked up to cable or satellite. The company is projecting a doubling of revenue from 2009 to 2010, a healthy growth rate. Stores continue to allocate shelf space to antennas.

A healthy growth rate in any sector also provides an opportunity for new companies. Antennas Direct is a relative newcomer; the company was incorporated in 2004. They offer a full-range of indoor and outdoor antenna options which can be purchased either online or through retail stores. The ClearStream Micron, an indoor antenna in their lineup, is the subject of this review.

The Micron is a passive indoor antenna with a range of 25 miles. Its performance is optimized for the UHF spectrum; it can, however, also provide good performance in the high VHF band. A fixed 6-foot coax cable is provided for hookup with a DTV tuner. Options are provided for tabletop use or wall mounting. Hardware required for wall mounting is included.

The antenna is compact and lightweight. It carries a simple, yet elegant look; the rounded corners add a nice touch. There is only one color option that is offered, black.

An in-line amplifier kit and a two-way distribution amplifier are additional options that can be paired with the Micron.

I started out by pairing the Micron with the HDTV in my bedroom. The TV sits on a dresser; behind it is a window, and behind the window is a tree. I placed the Micron on the dresser and slid it around while monitoring the signal strength of a few DTV stations. Once I found a good spot, I initiated a full scan on the HDTV. A total of 70 channels were found (the count includes all the sub-channels). Most of the channels, including some with average signal strength, came through without any picture breakup. Reception of channel 12 was good most of the time, but it did hiccup at times. Two channels, 7 (ABC) and 30 (KQED), however, had intermittent reception issues. Unfortunately my HDTV set made the tweaking exercise somewhat cumbersome: if it were unable to lock on to a channel for a few seconds, it would automatically delete the channel. Adding the deleted channel back required a rescan.

The dresser is 31 inches tall. I wanted to see if raising the antenna would improve the situation. The only available option was to perch the antenna on the frame of the window blinds behind the television set. I took the base off, situated the antenna on the frame and leaned it slightly against the wall. Re-examining the signal strength showed an improvement for most of the channels. Reception of channels 7 and 12 was now solid; channel 30, however, still showed occasional picture breakup. Note that channel 30 is also a problem channel in my theater room, which is served by a rooftop antenna.

Next up was the living room. This area is pretty open. Here I hooked up the antenna to the DTV tuner input of my DISH receiver. The antenna sat on top of the media cabinet, which is about 86 inches above the floor. I monitored the signal strength of a few channels while sliding the antenna around on top of the cabinet. Like in the bedroom, once I found a good spot, I did a full channel scan. The tuner locked on to almost the same number of channels as the bedroom. Signal strength in general was higher compared to the same channels in the bedroom. The one channel that was somewhat problematic in the bedroom, channel 30 (KQED), came through with excellent signal strength. Signal strength of channel 44 was on the lower side; there were times when the picture broke up, but most of the time it came through just fine. On the flip side, channels 7 (ABC) and 12 (NBC), both VHF, which came through fine in the bedroom, were absent from the scanned channel list. I tried another re-positioning exercise at a later time and found a spot on top of the media cabinet where the DTV tuner picked up a weak signal on channel 7, but the picture kept breaking up.

I briefly hooked up another indoor antenna I had on hand to check whether I could receive the two problematic channels. This antenna from Philips is an integrated VHF/UHF antenna. With this antenna placed on top of the media cabinet, I was able to receive channel 7; channel 12 showed up with a weak signal, but the picture kept breaking up. On the channels that the DTV tuner locked onto with both antennas, the signal strength was generally higher with the Micron.

Signal reception over-the-air is very location dependent. In my house alone, the reception varied between the two rooms I tested the antenna in. Many factors influence this: terrain, distance from the broadcast tower, line-of-sight. A rooftop antenna is often a more reliable option, however, for many installing a rooftop antenna or having access to it from a particular location may not be possible. An indoor antenna provides a valuable alternative. Do spend time, however, to find the optimal location for your antenna should you have some placement flexibility. Even small shifts can affect signal quality.

For me, the Micron antenna provided reliable reception for many channels. I am on the edge of the recommended 25-mile radius limit, so pairing it with the optional pre-amplifier kit or moving up to its larger sibling might have helped. Even so, the performance delivered overall was very good. The antenna is very presentable; you don’t have to worry if the antenna needs to be in plain-sight. Definitely consider the ClearStream Micron if you are in the market for an indoor antenna.