Up NextYamaha Musicast Wx-030 Wireless Speakers Review
Bowers & Wilkins (B&W) is a trusted name in hi-fi world. The company, which was established in 1966, has produced a long line of high-quality audio products, most notably high-fidelity speakers.

In the recent years, following the wireless trend, B&W adds a series wireless speakers in its product inventories. The Zeppelin Wireless is the newest product in the B&W line of wireless speakers, introduced in October 2015. Priced at $699, the Zeppelin Wireless falls into the high-end of the spectrum in the wireless single-speaker category. Does the price justify the quality and performance of the product? Read on. 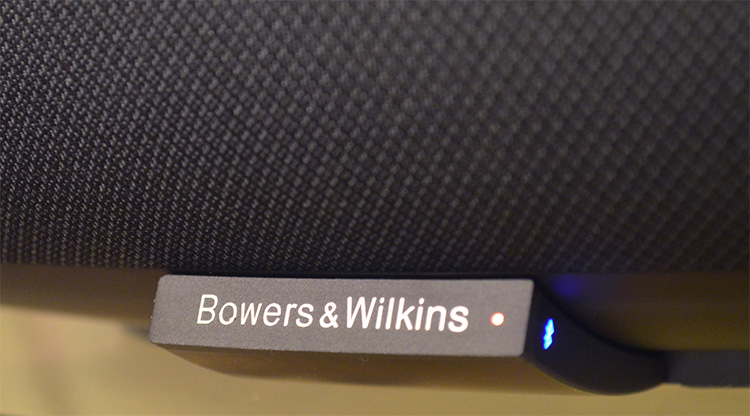 The Zeppelin Wireless, a new iteration in the B&W wireless product line-up, is a good-looking well-built wireless music speaker that boasts strong all-around performance. It features versatile connectivity, which accepts both wired and wireless (through Bluetooth or Wi-fi) connections. And regardless of the type of connection you choose, the Zeppelin Wireless delivers high-fidelity sound that will satisfy the audio enthusiasts who want convenience without sacrificing audio performance.

Reviewing Bluesound music system a few months ago has increased my new optimism of the use of wireless technology in high-fidelity music reproduction and the current state of wireless music systems. The Zeppelin Wireless speaker reviewed here is another example of a wireless music system, championed by the long-respected audio company, Bowers & Wilkins (B&W). This is not B&W‘s first venture into wireless audio. The company has had some experiences in the wireless speaker category with products such as T7, Z2, A7, and A5. The Zeppelin product reviewed here even has a predecessor called Zeppelin Air, albeit with slightly different functionalities and features.

The Zeppelin Wireless is advertised as a single multi-driver speaker that promises performance and versatility through the application of various technologies derived from B&W long history in audio engineering. This review should highlight whether the product delivers as promised.

Design, Features, and Set up

The Zeppelin Wireless, just like the previous Zeppelin product family, has a blimp-like shape. If I have to guess, its blimp-shaped appearance is where the name Zeppelin is derived from. The front-part of the speaker is covered by a non-removable grill, with cloth cover. All the speaker connectors are located on the bottom rear of the speaker. The volume control of the speaker is located on its top part, while the input selector is on the bottom front, to the side of the speaker’s Bowers & Wilkins logo. All these controls are touch sensitive (capacitive), giving the speaker an overall clean and simple look. To me, the speaker appearance is unique and elegant. It is a room-décor enhancer, which I would proudly display in my living room for all my guests to see. It is quite an eye-catching design, but it can also be put inconspicuously on the shelf or on one corner of the room if desired. 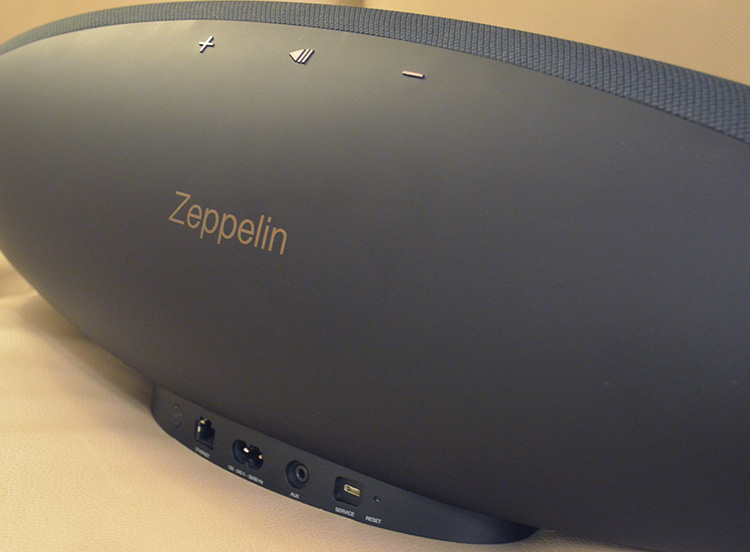 Controls and ports of Zeppelin Wireless

While the appearance of the Zeppelin Wireless speaker can be said to be simple, it contains significant engineering features under its hood. First of all, B&W manages to pack five drivers into the speaker, consisting of two 1″ double-dome tweeters, two 3.5″ midrange, and one 6.5″ long-throw subwoofer. These drivers are of the types found in other B&W hi-fi speakers. For example, the double-dome tweeter uses the same tweeter technology as the one used in the B&W CM series speakers. The midrange uses Fixed Suspension Transducer (FST) driver technology as found on the B&W flagship 800 Series Diamond speakers. This technology is intended to remove unwanted resonance for better clarity and more precise sound reproduction. These drivers are individually driven by class D amplifiers in a stereo 2.1 design (4 x 25 W amplifications drive the tweeter-midrange pairs, and 1 x 50 W amplification drives the subwoofer). Moreover, the Zeppelin Wireless has its own 192kHz/24bit Digital to Analogue Converter (DAC) and Digital Signal Processing (DSP), which is said to be twice as powerful as the one in its predecessor (Zeppelin Air). The enclosure of the Zeppelin Wireless is fabricated from 30% glass-fiber reinforced ABS and 50% thicker than the previous-generation Zeppelins. The implementation of all these features shows the seriousness of B&W quest to get as high performance as possible from the product.

Internal view of the Zeppelin Wireless

The Zeppelin Wireless is also more versatile than its predecessors in terms of wireless connectivity. Previous-generation Zeppelins are limited to Airplay only. But this iteration of Zeppelin has Bluetooth and Spotify Connect capability on top of Airplay. Thus it accommodates wider range of potential customers to include non-Apple users. Even Windows users can connect wirelessly to the Zeppelin using the Airplay feature in the Windows version of iTunes. The software that is used to wirelessly connect to the Zeppelin can also be used to control its volume level. At the time of this writing, Android users cannot directly use their phone to control the playing of their music collections through Wi-fi. I just wish B&W would develop an Android app for this purpose, which definitely will increase its level of versatility.

If you plan to use the Zeppelin through wireless connection, you can pretty much put the speaker in any desired location in the house near an available power outlet. Following the manual, I found setting up the speaker for wireless usage is relatively easy. Since I am not an Apple user, during the review, wireless connection to the Zeppelin was made through Bluetooth using my Android phone and through wi-fi using the Airplay feature in the iTunes for Windows version from my desktop. Both connections worked flawlessly. For comparison, wired analog connection from my phone to the Zeppelin was also tried.

For many wireless single-speakers on the market today, playing music loudly usually causes the speakers to lose their composure. By that I mean if you push the speakers too hard, the sound starts to get distorted, edgy, and unlistenable. But this rule does not apply to this Zeppelin! It can surely play loud, perhaps much louder than you ever want, while still maintaining its clarity and overall composure. To be honest, I discovered this by accident, when I changed to a source without realizing that the volume level was set at almost maximum. I don’t usually push even a review product this hard, but since I didn’t notice any sign of struggle from the Zeppelin, I just let it sing. And sing it did! Amazingly, the balance was still there and the music was still listenable at this very high volume level. In this regard, this Zeppelin can play with the big boys of speakers out there.

In normal listening level, the Zeppelin Wireless really shows its class. The music from the Zeppelin does sound well balanced with no obvious hole in the frequency spectrum. It may not have the smoothest treble extension, but nevertheless high-frequency range is painted in good details and clarity. The midrange sounds quite natural with nice vocal reproduction. Due to its size, one cannot expect its bass foundation to reach the very bottom, but nevertheless the bass conveyed is quite tuneful with sufficient authority. In fact, the Zeppelin produces bass that belies its size, giving an impression of truly full-range sound.

The Zeppelin Wireless is relatively small in size, but it is capable of producing sufficiently big soundstage. In short, the Zeppelin does not sound small at all. If I may nitpick, the only area where the speaker lacks is on the last bit of transparency in the sound it produces. The grill might have something to do with this, but B&W is probably more concerned with the protection of the inner components of the speaker from dirt and dusts than this minor drawback, which is totally understandable. I should note that this minor detail does not get in the way musical enjoyment that this speaker brings.

Most of my listening evaluation of the Zeppelin was done through wireless connection, either through Bluetooth or Wi-Fi. But since the port is provided, I tried the wired connection as well using the analogue audio-out port on my Samsung Galaxy Note 4 phone. Using such connection, I noticed a slightly smoother treble and more bass as compared to the Bluetooth connection. But the difference was relatively minor and only noticeable after a careful A-B comparison. It might be hardware dependent too. Therefore, the choice of connectivity to the Zeppelin should be based more on the convenience rather than on the sound performance.

B&W has created a wonderful wireless single-speaker system in the Zeppelin Wireless. The speaker packs thoughtful design features supported by high-quality components developed from the company’s long experiences in speaker technology. Most importantly, these engineering features translate well into the speaker’s sound performance, bringing music to life with its well-balanced sound spectrum. The Zeppelin is quite versatile in its connectivity, accommodating both wired and wireless connections via Bluetooth and Wi-fi. Its strong all-around performance should put this speaker in the front row of single-speaker system category.

At $699, the Zeppelin Wireless falls into the high-end wireless single speaker category. It is not cheap for sure, but everything about this speaker screams quality: from its excellent build quality to its versatility and sound performance. Hence, I can safely say that the Zeppelin Wireless packs more-than-sufficient values to justify its price.