SVS is now a well-established manufacturer of killer subs. In fact, they gained notoriety the first year they released those cylindrical subs that shook the walls.

They have come a long way since those days, first turning to box subs (spouses don’t particularly care for the cylinders, even though it is probably the best way to design a subwoofer), then to speakers, releasing the MTS series, of which we reviewed the MTS-01.

It was a great speaker, and yet, they fine tuned the crossover shortly after the initial release, and upgraded it, having owners send the speakers back to have the crossover replaced.

The MTS-01’s are $1,499/pair, which is a bargain for the quality of sound. Their secret was the very expensive tweeter that they put in the speaker, leaving the enclosure to be very plain (keeping the cost down so they could put in that tweeter and deliver remarkable sound quality).

So, now comes the STS series, and we review here the STS-01’s, which like the MTS-01’s, are floor-standing models. They also have a center channel speaker and rear surround bookshelf speakers to complete the 5.1 system.

Last, but not least, they included their new AS-EQ1 equalizer, which uses Audyssey processing technology to apply thousands of correction points to the netherworld of low frequencies. As you are probably aware, most subwoofer companies have been adding one or two EQ dials on the amplifier panel, assuming that you would probably only have one peak or dip to deal with. It has not turned out that way, and good EQ for the bass just has to have more EQ bands. The AS-EQ1 has lots of them.

The tweeter on one speaker is mounted on the left side, while the other speaker in the pair has it mounted on the right. Depending on your setup, you will likely prefer them arranged either with the tweeter on the outside or on the inside, so be sure to try them both ways. 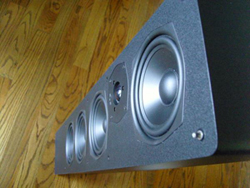 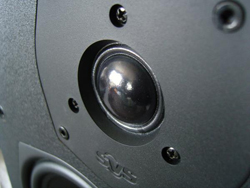 On the rear, there is a single set of speaker binding posts. 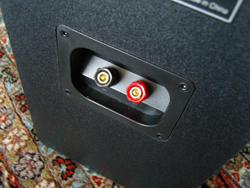 The PB10-NSD subwoofer uses a 10″ long-throw driver and 350 watt power amplifier in a rather large enclosure. When I tested it, I had not looked at the price yet, and the results led me to figure this thing would clock in around $1,099. But, no, true to the SVS philosophy of giving your something that will shatter windows for a few bucks, the sub is priced at $499. 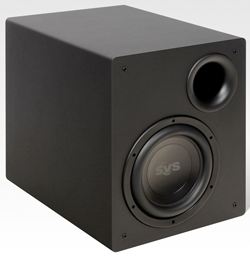 The 10″ driver is a long-throw design, and I can attest to that fact, because when I ran a 25 Hz sine wave through it, my pants legs were flapping in the wind coming from the port when I stood 4 feet away.

The 325 watt BASH amplifier has a simple set of controls, including gain, crossover frequency, and phase. It also has speaker-level as well as line-level in and out for pass through to small satellite speakers. I used the line-level (low-level) inputs for listening and bench testing. 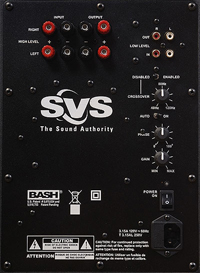 The new AS-EQ1 is an outboard EQ box specifically for subwoofers. The processing is via Audyssey technology, and thousands of points from 10 Hz to 1 kHz are analyzed and compensated for. It requires a software program to be installed on your computer (I suggest doing this with your laptop) to set up the EQ.

The rear panel has line-level RCA inputs for two subwoofers if you have stereo sub pre-outs (most receivers only have one sub-out, so I set it up to use both subs with a single sub-out signal). There are two sub-outs and a pre-out for one of your satellite channels for matching the output of the subwoofers to your receiver’s other channels. I bypassed this step because I used the system in a two-channel setup, and it still worked fine. I just had to turn the volume control on each sub to match my other two speakers after I ran the EQ software program.

The first thing I had to do was set up the EQ on the subs. I placed them several feet apart, turned the volume control half way up, connected them to the AS-EQ1, connected the AS-EQ1 to a USB port on my laptop, and booted the program. The sub’s crossover was disabled, and the phase was set to 0.

Shown below is a series of screen shots, as I went through the process of analyzing and correcting the room response for the subs. As you can see, it steps you through the process very easily. When I got to the message about the EQ box not sensing that I had a satellite speaker connected, it offered me the choice of just proceeding ahead without it. There was no consequence to this, other than having to manually turn the subwoofer volume a bit after I was finished. This did not affect the EQ, only the final loudness in relation to my two main speakers. I like bass a lot, and would have probably done this even if I had balanced the subs against one of the speakers during the EQ setup, and I usually turn the bass up a bit.

As suggested during the software run, I placed the included microphone in three different positions for separate measurements. In this case, I have two chairs by my picture window where my wife and I sit in the evening and listen to music while reading. So, the microphone placements spanned about three feet laterally.

This last screen (below) shows the before and after EQ curve for my setup. As you will see in the bench test section, the curves shown in the results screen really do match what I got with a calibrated microphone and response analysis software.

The last step saves the settings in the AS-EQ1, and you can disconnect the USB cable, turn off your laptop, and connect the AS-EQ1 to your receiver’s sub pre-out. In my case, since I was not using a receiver with bass management, I set the PB10-NSD’s low-pass crossover to 50 Hz.

I listened to many CDs in my collection that I store on my music server downstairs. It sends the digital bitstream to a Squeezebox Duet music streamer which is connected via Toslink optical cable to a Cambridge Audio DacMagic upstairs to the listening area. The DacMagic’s XLR balanced outputs go to the BAT VK-5i preamplifier. I also listened to some SACDs with the recently reviewed Marantz SA-7S1 SACD player.

Both Susan (my wife) and I were extremely impressed with the sound of these very, very affordable speakers. However, I was not surprised. This has become the norm for SVS. Now, you can get floor-standers from many companies in this price range. The price is not unique. It is the sound that you get from these speakers at that price that is unique. I think it is a simple business strategy, which is to put most of the money into the drivers, and not so much into the enclosure. No rosewood veneer here. Just great sound.

Comparing the STS-01’s to the MTS-01’s, it appeared that the STS-01’s had a little more brightness, and the bass (without the subs) was a bit more forward. Putting the subs into the package, and adjusting the volume control on both subs, yielded a full range sound that was very natural, without too much sibilance. There was no boominess, nasality, nor was there any midrange congestion (due to having so many mid-drivers).

I preferred the MTS-01’s sound, because it was flatter, but the brightness of the STS-01’s was by no means objectionable. Strings, brass, and the human voice all came through in a delightful manner. I have to say here also, that the speakers could easily be made to have a flat response by using the Auto EQ functions that are in most new receivers these days. So, slight variations in frequency response have become almost irrelevant. Distortion is a different issue, and we will look at that in the On the Bench section.

Dialing in the volume with the PB10-NSD subwoofers added the low registers when I played pipe organ music. It is really quite amazing to get such deep bass from a relatively small driver as subwoofers go. The sub produced very clean sound, without noticeable distortion. I was able to get 103 dB maximum SPL (before the built-in limiter kicked in) using a combination test tone consisting of 20 Hz, 31.5 Hz, and 50 Hz sine waves.

THD+N vs. Frequency results are shown below. Distortion at the low end goes above 5% at about 40 Hz. In general, distortion stays below 1% for most of the audible band.

Quasi-anechoic frequency response tests confirm my listening experiences that the response is higher in the frequencies below 500 Hz and above 4 kHz (first graph shown below). Going 300 off-axis resulted in less response above 8 kHz (second graph shown below).

The impedance curve indicates the speaker is 8 ohms nominal. The phase stays within Â± 400. These speakers should be easy loads for mass market receivers.

Plotting THD+N vs. Frequency, with 50 Hz set to 100 dB at 1 foot, yielded the graph shown below. Distortion stayed below 3% from about 22 Hz all the way up to 200 Hz. Again, this is pretty amazing performance for a 10″ driver, and it is also testament to the fact that having a large enclosure really makes a difference. The trend these days seems to be in small cube subwoofers, and even with a long-throw driver, it is still difficult to move a lot of air without significant distortion.

Here are the frequency response results (room response) at 15 feet (the distance from my listening position to the subs) with and without the EQ turned on. You can see that application of those numerous EQ bands allowed the response to be flat from 20 Hz up to about 100 Hz, which is well within the range (setting the subwoofer crossover in your receiver’s bass management menu) of most home theater setups.

The SVS STS-01 speakers, PB10-NSD Subwoofer, and AS-EQ1 are the latest examples of SVS’ ability to design and implement fine products. All three of these components are very affordable and would make a great addition to any home theater.