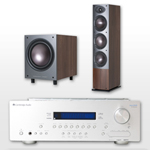 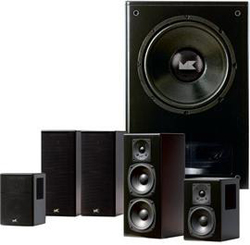 MK Sound, successors of the former Miller & Kreisel company, started with a “don’t mess with success” philosophy. At first, it sold legacy products like the renowned 150 THX speakers, and introduced consumer products like the M Series that were previously available only to the professional market. More recently, MK Sound developed a new tweeter for its MPS 2510P and 1611P professional monitors. The new tweeter was developed in conjunction with Peerless of Denmark (now part of Tymphany), M & K’s driver component partner for 34 years. MK has incorporated the new tweeter into its newest consumer speakers, the 950 series.

The 950’s, THX Select2 certified, are now the penultimate MK speakers, below the top-of-the line 150 THX Ultras and above the 750 series speakers. I got a quick listen of the 950’s during a tour of Chicago’s Abt Electronics this spring, and wanted to hear more of them. MK Sound/Dolphin Group provided a review set of three LCR 950 speakers, two SUR95 tripole surround speakers, and the MX250 subwoofer. Let the games begin!

The 950 Series, like virtually all MK Sound speakers, are sealed-design enclosures. The LCR950’s use MK’s new Pro 1″ silk dome ferrofluid double magnet tweeter. The tweeter is mounted in a cast aluminum front plate bolted directly to the magnet system, which MK claims results in improved mechanical stability. Lower frequencies are handled by two 5.25″ polypropylene bass/midrange drivers. The 950’s rated frequency response goes to 80 Hz, no easy feat for a compact-sized sealed monitor. The 950’s use MK’s Phase Focused crossover, which contributes to MK’s reputation for fast transient response and precise imaging. There is no dedicated “center channel” speaker, the LCR950 is intended to be used for all three front channels (left, center, right). I’ve said it before, but it’s worth repeating: Don’t underestimate the power of using timbre-matched speakers for the front channels.

At first glance the 950’s appear visually identical to the 750’s, but the 950’s have a black satin finish and rounded edges that gives them a more polished appearance. As befitting their professional lineage, MK speakers have a utilitarian “we mean business” look to them; there’s no fancy wood grain here. However, the speakers do come with sets of white gloves so you can remove them from the boxes and set them up without smudges. Classy.

The MK’s all have removable, metal-mesh grilles that are magnetically attached. The back of the 950’s have nine pre-drilled holes should you wish to wall-mount them. Perhaps to assist with mounting them flush to a wall, the speaker binding posts are recessed in a cavity at almost a 90 degree vertical angle that makes it nearly impossible to use banana plugs. Spade lugs or bare wire are your better options. 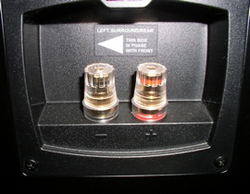 The slightly smaller SUR950T tripole is both a front-firing monopole and side-radiating dipole speaker. The theory is that by doing so the speaker provides both specific imaging and a diffuse enveloping soundfield, and my prior experience with MK tripole surrounds is that the theory works like a charm. The front of the SUR950T contains the same 1″ tweeter and a single 5.25″ mid-bass driver as the LCR950. Each side of the SUR950T contains a 3″ pulp (paper) mid-tweeter mounted in true dipole fashion – each SUR950T is wired so that the driver facing the front of the room will be in phase with the front speakers. The SUR950T’s are rated down to 87 Hz. 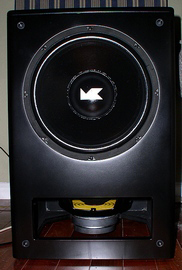 The MX250 subwoofer packaged with the 950 Series is one of MK’s “push-pull” designs, in which two 12″ long-throw drivers are mounted with one front-firing and the other up-firing into the cabinet. The push-pull design is intended to significantly reduce even-order harmonic distortion and increase output. As a result, the MX250 is powered by a relatively modest 250 watt amplifier, and is rated down to 20 Hz. Because of the push-pull orientation, the MX250 is a tall sub (at just a shade under two feet high) and weighs 70 pounds. The back side of the MX250 contains dual line-level inputs and outputs for daisy-chaining additional subs, as well as speaker-level inputs and outputs. Phase is adjustable from 0 to 180 degrees, and a defeatable low-pass filter is adjustable from 40 to 200 Hz. The detachable power cord is two-pronged, but I still had to deal with a ground-loop when I added the MX250 to my system (ultimately cured by mixing up components and power outlets). 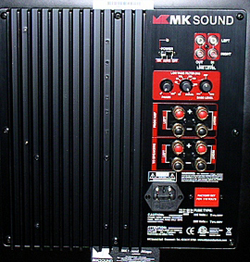 All 950 Series speakers are nominally rated at 4 ohms, so the MK’s need to be mated with an amp/receiver that can handle driving a 4 ohm load. I hooked up the 950’s to an Integra DTR-8.9 THX Ultra2 receiver, and later used the Integra as a pre/pro driven by an Emotiva XPA-3amplifier (300 watts RMS at 4 ohms), so power was not an issue.

Starting out with two-channel music listening, I immediately noticed two things about the 950’s. First, they created rock-solid phantom center imaging. As in, I kept walking up to the speakers to make sure the center-channel wasn’t playing. One of my favorite 80’s rock albums, Peter Gabriel’s So, benefits from superb production and engineering. The song Mercy Street has a haunting two-part lead vocal; on the MK’s, Gabriel’s voice seemed to float in the middle of the room.

Second, the 950’s created a much bigger soundstage than expected from the compact-sized speakers. Even modestly engineered albums, such as the acoustic guitars on Uncle John’s Band (from the Grateful Dead’s Workingman’s Dead), sounded larger than life. The soundstage extended far beyond the physical boundaries of the speakers, as well as creating impressive front-to-back depth.

Speaking of superbly engineered rock albums, the Eagles spend a full eight months recording the Hotel California album. Don Henley’s vocals on Wasted Time sounded great on the 950’s, sounding natural throughout the all-important midrange frequencies. The MX250 subwoofer provided robust, tight bass without calling attention to itself. The kick drum on New Kid in Town is prominent in the mix, and the MX250 accurately reproduced the snap of the beater on the skin, with fast transient response that was surprising for a sub with dual 12″ drivers.

Switching to movies, Pirate Radio is a romanticized look at the unauthorized radio stations operating from barges located off the British coast in the 1960’s. The film has plenty of vintage early rock and soul music, fast-paced dialogue and the occasional loud dynamic section. The 950’s, as expected, shined in reproducing accurate dialogue and seamless pans across the timbre-matched front speakers. Amelia, a biopic of the famous aviator, was pretty disappointing as a film, but had plenty of flying scenes that gave the SUR950T’s a workout. The SUR950T surround speakers did an excellent job of creating ambiance without overly pinpointing their source.

Towards the end of the review period, I received the Emotiva XPA-3 amplifier for review (in process) and used it to power the front speakers. Although many people are unlikely to match the 950’s (at $600 each) with separates, Emotiva amplifiers are known for their high quality at very reasonable prices (the XPA-3 normally costs $599, on sale for $539 at this writing). Mating the 950’s with the Emotiva amp brought out a lot of additional detail, such as reverberations in vocal phrases that were otherwise inaudible. In fact, with high-frequency percussive sounds like cymbals, it was almost too much of a good thing. The sound was not brittle, harsh, or compressed, but laser-like accurate. Nothing wrong with the sound, it just depends how spicy you like your curry. As it was, I was impressed with the 950’s powered by the Integra. But the performance of the 950’s driven by the Emotiva was tantalizingly close to amazing; the sound at the top end was just a touch too revealing for my ears. Because the Emotiva is a new piece of equipment to my system, I cannot say whether the extra high-frequency energy was a result of the amp, the combination of amp and Integra processor, or 950’s.

The LCR 950, at the low end of its rated frequency response, produces an impressively low 0.55% THD+N. 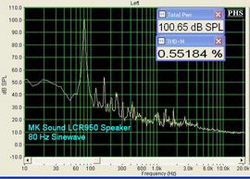 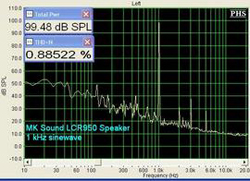 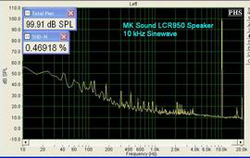 White noise at one foot, one meter, and two meters (in-room response). 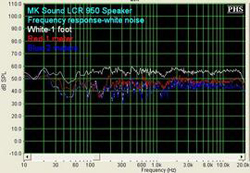 The LCR950 is rated at 4 Ohms nominal impedance, and as shown the graph stays above 4 Ohms throughout the spectrum. Electrical phase after clearing the speaker’s LF response stays between +30 and -15 degrees. As long as the receiver/amp is rated for 4 Ohm speakers, the 950’s should not present a difficult load.

One of the benefits of a push-pull subwoofer design is reduced even-order harmonics, but it comes at the cost of higher distortion. As a result, the MX250 subwoofer’s response at 20 Hz topped out at about 98 dB and 8.78% THD+N. 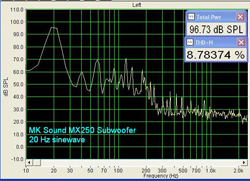 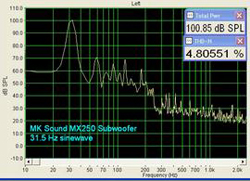 THD+N vs. frequency shows distortion at or above 10% from 10 to 30Hz, then drops rapidly. This sub is designed for maximum output rather than max low frequency extension. 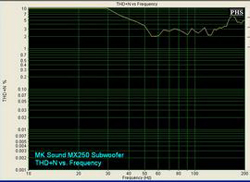 This review took longer than usual to complete, for the simple reason that I didn’t want to say goodbye to the MK 950 series speakers. The 950’s are definitely worthy of the MK Sound name. They have the classic attributes that make MK’s so popular in studios—precise imaging, fast transient response, and an open soundstage. All this at a surprisingly low price, given the level of the 950’s performance. Definitely recommended!