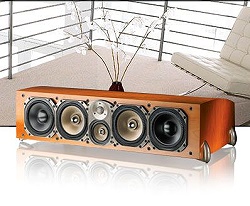 In most A/V publications, they will tell you to stick with one brand and line of speakers so that the tonality will be the same across the entire soundstage. That’s true. But, if you look for neutrality in sound, you can mix and match with no problem. I have used electrostatic speakers (ESLs) in our home theater lab as a reference for years. The problem has always been the center channel. The front left and right ESL are 6 feet tall, and the center channel ESL was only 4 feet, and even then, the motorized projection screen would come down in front of it about a foot. Secondly, ESLs cannot be driven to high SPLs like cone speakers because the membrane only moves a few millimeters between the stators, and most ESLs don’t have a lot of surface area, including the one I was using as the center channel. The front left and right ESLs did fine, but I just could not get the loudness out of that center channel ESL that I really wanted. So, I decided to use a conventional (cone) speaker for the center channel, but dreaded the problem of mis-matched tonality, as the two 6 foot ESLs are very neutral. Then . . . I heard the new Paradigm Reference Signature C5 center channel speaker at CEDIA 2009. Well, “Neutrality” could be its middle name, and I got one to try out in our lab, replacing the existing ESL. Was I disappointed in the results? Read our review to see.

Back when home theater began to take off, center channel speakers were designed to sit on top of your TV, and that was when TVs were still the big boxes that had a CRT as its display. They worked fine as long as they were magnetically shielded, but they also had to be rather small, because even the largest CRT TV was about 35″ diagonal.

Spring forward to now, and everyone has a flat panel HDTV, maybe 6″ depth at the most. The newest ones are only 1″ deep. Kind of a small platform on which to be putting a center channel speaker.

Also, home theater aficionados wanted BIG speakers to go with a BIG subwoofer, so that the nuclear weapon detonation in the DVD movie would have a BIG sound. So, they bought BIG speakers. But, the center channel was a problem. If it was as big as the others, where would you put it?

Now that you have a huge choice of speakers that go in-wall, on-wall, in-ceiling, on-celing, and in-floor, the problem started to go away. This is the current preference apparently with custom installers, or rather, their customers. Out of sight, out of mind, but not out of sound.

One little problem still haunts us, well, maybe just a few of us. What to do with the aficionado who likes not just BIG speakers, but REALLY BIG speakers, such as those 6 foot ESLs that I have (I also have four Carver Amazing Mark IV ribbon speakers in a second lab, and one pair is nearly 6 feet tall)? And then there is the pair of Maggies I have in a third listening room, which are also in the 6 foot range.

There is no way around it. I had to get a REALLY BIG center channel speaker, and it could not be a flat panel speaker. It had to be a cone speaker that would sit horizontally.

I have been thinking about this problem for several years.

Then, at CEDIA 2009, I went by the Paradigm booth, and they were displaying their latest version of the Reference Signature line. I was awestruck with the new C5 center channel speaker, shown below. It is a 3-1/2 way, six driver speaker that is more than 3 feet wide and has six drivers. Not to mention weighing 81 pounds. It uses a pure beryllium 1″ dome tweeter, a 4″ upper midrange, two 7″ mid/bass, and two 7″ woofers. This speaker met my specification of REALLY BIG.

We reviewed the complete Reference Signature System a while back, but was using the C5 with the S8’s and ADP’s, not my ESLs. Even after they were repacked and shipped back, there was this little spark in my brain that the C5 might – just might – work with the ESLs and maintain the neutral soundstage. But, I only had the time to do the review of the Paradigm package, and didn’t get around to testing the C5 with the ESLs.

So, having now been re-exposed to how REALLY BIG the C5 was, and the fact that there was yet a new version with ribbed surrounds (I am referring to the rubber surround at the perimeter of the midrange and woofer drivers, shown in the photo, not surround speakers), I said to myself, “It’s time to see if I can replace that center channel ESL with something that will get the job done.” So, Mark Aling sent one to me, and included the J-18C stand. The photo is actually the one that I received, and you can see part of the stand underneath. The ribbing in the surround eliminates “dimpling” that occurs in a conventional rubber surround at high SPL. The dimpling causes distortion in the sound. To me, this is a HUGE advancement in speaker cone design, and no other manufacturer has it, yet. 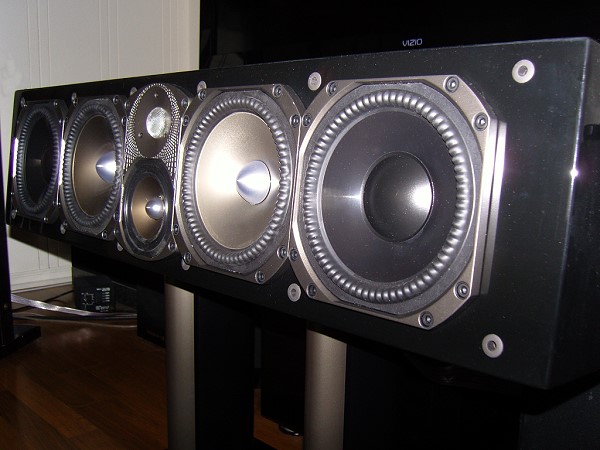 So, here is a photo of the front of the home theater lab, with the two six foot ESLs as front left/right speakers, and the C5 on the stand in the center. The screen now can be lowered to the level I really want, and the C5 is just below it. There are four 18″ subwoofers behind the screen, two dipole side speakers, and two 48″ ESLs for the rear surrounds. Notice the small area carpet on the floor in front of the C5. This helps to absorb sound that would otherwise be reflected off the floor towards the main listening position on the couch at the back of the room. 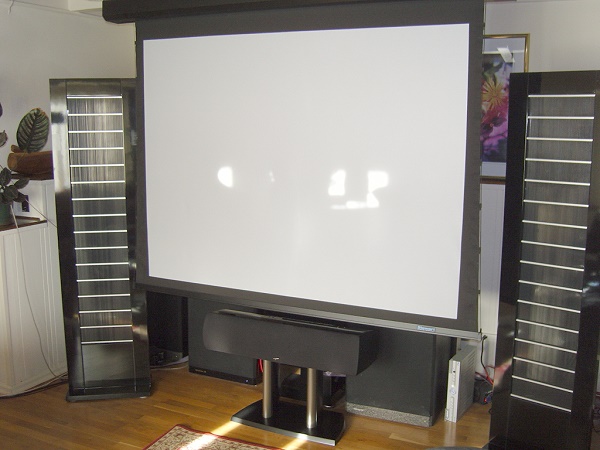 To come to the point, I was speechless at how well the C5 blended with my ESLs, not just in neutrality, but in the way the sound swept all the way across the front. I could not detect any difference in the sound from the C5 sitting off to the side, compared to sitting directly in front. This is due to the tweeter and upper midrange driver being arranged vertically, and that upper midrange driver is only 4″ in size. The way this works is that the smaller the driver, the less the falloff when you move off-axis. And, it is the upper frequencies that get attenuated off-axis. Also, the C5 is rated to 35 kHz on-axis, and it falls to 20 kHz off-axis ± 2 dB. This implies that you will not hear any noticeable rolloff in the audible highs off-axis. Now, I do have to say that moving off to the side definitely affects the sound from the ESLs. That is one of their weaknesses. The highs fall off considerably off-axis.

Ah, now room-correction to the rescue. The Denon AVP-A1HDCI has Audyssey room correction built-in. It corrects for the frequency response at any sitting position you wish. You have to go through six measurement positions, but if you want, you can set the microphone in the same spot (the sitting position you will always be in) for all six measurements. That procedure corrected for the high frequency rolloff in my off-axis easy chair (guests get to sit on the couch which is in the center viewing position, but they don’t know I have done the room correction for MY sitting position. We also have a new Anthem D2v in the main lab, and it has room correction as well, but it is Paradigm’s own, not Audyssey. We will talk about that installation experience soon. Note that the Paradigm sounded very neutral with or without the Audyssey correction. No boominess, chestiness, nasality, or extra sibilance. I used the room correction mainly just to get those high frequencies from the ESLs in my off-axis chair. To heck with the couch.

Anyway, the Paradigm C5 . . . no, no, I can’t say, “just blew me away,” because that’s is in every A/V magazine on the planet, including ours. How about, “It sounded as if a veil had been lifted,” no, no, no, I hate that phrase. Maybe, “My jaw was on the floor.” No, been there, done that, too many time. How about, “This is a superb speaker. I will be bolting that speaker stand to the floor, and the C5 is bolted to the stand. It isn’t going anywhere.” Yup. That’s it.

As an aside, here is a video of Paradigm’s CNC machine that automatically assembles various speaker enclosures. This is why Paradigm products are such a good value. They assemble everything in their own factory, right down to the voice coils. Click on the photo to see the video, which is a full 1,920×1,080 high definition WMV (Windows Media Player file). It’s a big file, so be patient and let Windows Media Player do its thing with the buffering before it starts to play.

By the way, do you know what CNC means? It’s an acronym for Computer Numeric Control. It came about years ago when computers were first used to machine various items, but the programming was very basic, and the capabilities were limited. The term really needs to be updated to Computerized Precision Machining, or CPM, because the machining abilities of these things are amazing. Paradigm actually builds their own CNCs in their factory, so when one says they manufacture everything from scratch, it really means everything. 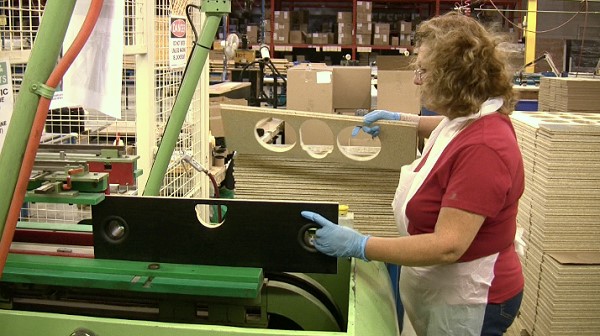 The point of this treatise is to say that you can use different speakers in your home theater, as long as they are all neutral. And, the story doesn’t really end there. Most new SSPs and receivers have built-in room correction that will flatten the frequency response, as well as set delay for speaker distance, and so on. As a result, the basic frequency response of a speaker is not so important as it used to be. But, the correction cannot remove such flaws as a boomy enclosure or the metallic “tizzy” sound that some metal dome tweeters have. The C5 is as good as it gets, right out of the box. When home theater was getting started, no one realized that the center channel would be the most important. Well, now we know, and the Paradigm C5 is a killer.