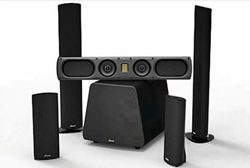 I consider myself a lucky guy. Not only did I get a chance to go to Las Vegas to cover CES, I also got to sit down with Sandy Gross and have a personal audition of his new Triton 2 towers. Sandy has had an illustrious career with Polk Audio and Definitive Technology and has more recently helped start up a new company called GoldenEar Technology. The Tritons have garnered critical acclaim, but they aren’t the only speaker GoldenEar makes. This review is aimed at their SuperCinema 50 system which combines three SuperSat 50s with two SuperSat 3s and their ForceField 4 powered sub. Though the drivers are cut from the same cloth as the Triton 2s, would these smaller speakers have the same sonic chops as their big brother?

Mounting is easily accomplished using the threaded inserts or keyhole mounts on the rear, or table top using the optional smoked-glass shelf stand. An included adjustable foot allows multiple angles when shelf mounting the horizontal center-channel version. The center channel has the HVFR tweeter tilted 90 degrees for proper horizontal dispersion, but is otherwise the same. Though they can be wall mounted around a flat panel or projection screen, I had mine mounted on stands for this review.

The stands allowed me some latitude to play with the placement and toe-in. Even though the center channel had adjustable feet, I placed mine above my TV in a PVC “U” channel I had laying about my HT for some reason. This allowed me the ability to adjust the angle to preferred seat for listening. It was a “necessity is the mother of invention” kind of setup that worked well for me.

The HVFR tweeter is not a unique design, but it deserves a bit of explanation on how it works. Unlike a normal ribbon that vibrates when current is applied, the HVFR is shaped like a squeeze box. As the current is applied, the folds squeeze together and expand to produce sound waves. Because of the larger surface area involved, it has the equivalent surface area of greater than  four conventional one inch dome tweeters and the benefit of a wider dispersion pattern with more efficiency. I have seen a similar designed tweeter by Martin Logan. 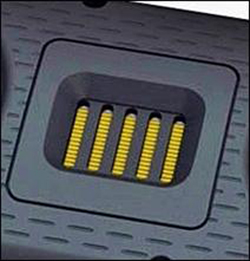 The radiators are not the typical, soft, rubbery design. They are hard and stiff. All of these are housed in a slim gloss black shell that is not ported. 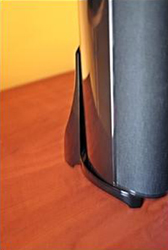 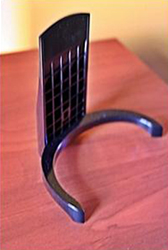 The 5 way binding posts in the rear are made of metal and are recessed into the back panel. I mounted the front R/L speakers on stands, but they come with a template that allows for wall mounting and the SuperSat 3 rears came with their own stands for easy placement on a shelf.

When wall mounted, the speakers blended well with a large flat panel HDTV. My wife really liked the look of the SuperCinema 50, due to their slim, unobtrusive design. I agree with her. They also look striking with their grills removed and I did all of my reviewing with them off.

The ForceField 4 subwoofer was a horse of a different color. The sub is not shaped like a typical cube, but more like a rectangle with rounded edges. The top is tapered in a bit. When I initially set the system up, I popped a movie and ran downstairs to the kitchen to get something to eat during the show. When I got into the kitchen, I heard the sub kick in and my dishes were literally rattling in their cabinets (my kitchen being located directly under my HT). I raced back up stairs and turned the volume down on the sub. After fussing with it for awhile, I found that having the volume turned to about a bit less than a quarter of the way up tamed the percussive impact considerably. This sub has some real potential in the output department! 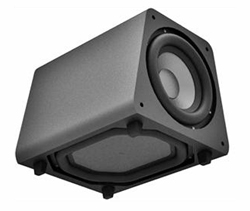 The sub has a 10 inch long throw front firing driver with a 11×13 quadratic radiator on the bottom. It is of a sealed design and not ported. Large soft rubber feet will keep it off the carpeting or prevent it from walking around on a wooden floor. An optional wireless kit can be a purchased if you want the ultimate placement flexibility. High level (speaker wire) inputs and a low level (RCA) inputs are on the back. The subwoofer output level and low pass crossover knobs are also located on the back. Included for all speakers are well illustrated and informative manuals for proper placement tips and set up recommendations. In fact, these manuals had more comprehensive information in them than I recall from any other manufacturer that I have reviewed in the last year. Well done, guys! After some extensive “pre-listening”, I settled on crossing the mains with the sub at 110 Hz and the rears at 120 Hz. Other than some minor tweaking with the subwoofers position, I ended up placing it in the front left corner of my room with the driver facing the center of my room. Now let’s move on to how they all sounded as an ensemble.

Usually, a complete surround system is designed to display its sonic chops with movies. In this regards, the SuperCinemas did not disappoint. The 50s in the front blended well with the small 3s in the rear and presented a solid, believable surround field during the time I reviewed them. In a darkened room, they easily disappeared and allowed me to focus on the movies. I was afraid that the tweeter design might call too much attention to the treble and sound harsh or fatiguing, but the treble was quite extended and sweet. Mid range was full, but the lower midrange seemed a bit weak. More adjusting with the crossover might blend the low mid with the upper bass. There was plenty of room with the sub to achieve this. Jack Shafton from GoldenEar Technology explained to me that the low midrange would actually be re-enforced when the speakers are wall mounted. This was an intentional design consideration as probably 90% of the time, that’s how they will be installed. My overall impression was that the system could play loudly with no hint of strain. The bass was very powerful in my room, and I felt I really had to hold back on the subs real potential. I can not imagine needing a second sub unless you have a very large room, and even then, be careful for what you wish for. 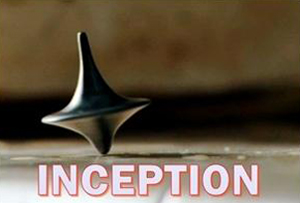 Inception: This film provides some very powerful bass and the ForceField 4 delivered in spades. Lots of water, breaking glass, gunfire and yes, even dialog, all sounded clear and distinct. The surround sound envelope was ever present and realistically presented. With the center channel speaker directly above my HDTV, I never noticed sounds as being too directional and calling attention to its location. Voices were always locked into the images on the screen. As sound effects rang from the front to back speakers, there were no noticeable gaps in the sound. 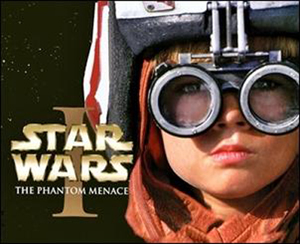 Star Wars: Episode One: In particular, I skipped to the pod race scene. Besides the explosions and swirling surround sounds, there was plenty of crowd noises and high pitched whining (and not just from Jar Jar Binks!) from the pod racer engines. The SuperCinemas presented the entire chapter in believable, natural sound. Even when I turned the volume way up, the SuperCinema never complained. These guys could easily work in a larger space and still fill the room with good dynamic sound.

Music can be a tougher challenge for a surround system. Especially if you listen to two channel music. The question becomes whether the front mains can work together with the sub in a seamless fashion. For the most part, I liked the way the treble and midrange blended. This is due in large part to the D’Appolito arrangement and the extended midrange enhanced by the passive radiators. The blending with the woofer was also fairly good and added a lot of weight to the low end. Imaging was very good and that should be expected from a speaker that is only a few inches wide. Horizontal dispersion was good with clear sound heard from any of my three home theater seats. 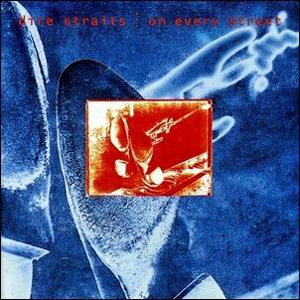 Dire Straits: On Every Street: Tight bass and sweet guitars, both electric and acoustic highlight this disc. Knopfler’s voice was as craggy as ever. This entire disc sounded wonderfully rich and full. A few tracks exhibit very deep bass and the ForceField 4 dug down deep for it without complaint. Stereo imaging was as good as any speakers I have listened to recently…many of them costing a whole lot more than the entire SuperCinema system.

The Who: Tommy (SACD): For some surround music, I picked a classic that I have listened to since the dawn of time (meaning, since high school). The hi-rez surround mix was a bit of the blast from the past meets the sound of the future. In particular, Tommy, Can You Hear Me? has voices coming from all the speakers and the timbre was perfectly matched by the fronts and surrounds. My only complaint with the surrounds is that they are monopole and I prefer the more diffuse sound of bi/di poles. If mounted on the wall, you will not be able to toe-in or angle the speakers out in order to tweak the sound. Fortunately, the SuperSat 50s exhibited a fairly broad off axis sound that allowed me to sit in other places beside my sweet spot and still enjoy the music. Again, diffuse surround sound from behind is a preference thing and not a design flaw.

Sandy Gross and team have really put their years of experience to work with the SuperCinemas. They preformed admirably on both music and movies. They contain some of the same elements that their Tritons have, but allow for a more flexible placement due to their size and the fact that the sub can be place where it sounds the best in your room. The build quality and fit-n-finish are excellent as well. If you are in the market for some good sounding speakers that look good next to your new HDTV, you owe it to yourself hear the GoldenEar Technology SuperCinema 50s. They provide a lot of great sound for the money.