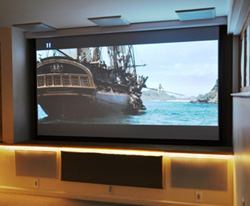 A couple of years ago I designed a home theater for a client and specified the Episode Home Theater LCR because among other things, it offered an adjustable planar magnetic tweeter. It is a hulking speaker that was designed to be integrated into cabinetry and I can tell you it sounded terrific. I became an instant fan. The HT-650LCR is still considered the flagship home theater speaker.

Since then the line the Episode line has dramatically grown to include not only in-walls and in-ceilings, but also conventional in-room box speakers. Although the conservative “highhat” style speaker is still the most common installed, the new trend for in-ceiling and in-wall speakers is to up the ante with “home theater” or “Cinema” series speakers; complete with baffled enclosures and multiple angled drives.

Episode was developed exclusively for and by SnapAV, a fast growing dealer-based A/V supply company out of North Carolina with distribution on the west coast as well. Their ever-increasing proprietary lines include most everything a custom installer would need besides speakers, such as cabinets, cabling, screens, mounts, etc.

Because of the positive experience with Episode, I gladly accepted an offer to review an entire package including in-wall subwoofers. The speaker package for this review includes: the LCR in-ceiling ES-HT700 as fronts, with the ES-700 surrounds and back and the in-wall ES-SUB with an accompanying EQ box powered by the E-2100 rack mounted amplifier which is sold separate. 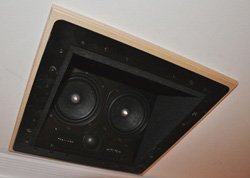 The ES-HT, or Home Theater LCR is what intrigued me most to consider permanently installing them in my ceiling. Although the enclosure is square, the front baffle and dual 5 ¼” woofers and 1″ titanium tweeter are angled towards the listening position. Tone controls are provided for treble and for woofer crossover response, both with a plus/minus 3db adjustment.
The woofers are designed with what Episode refers to as NCS (natural cell structure), paper drivers combined with the strength of Kevlar. This is said to retain the damping qualities of open cell paper and rigidity (and speed) of Kevlar. With a sensitivity of 87 and produce 4 ohm loads, the more power you can throw at them the better.

Episode refers to the tweeter as a catenary dome unlike a conventional dome design.

The elongated design is thought to create a wider soundstage.

The front is angled 35 degrees towards the listening position in addition to the tweeter having a 17 degree pivot for precise aiming of the higher frequencies.

The enclosure is solid ¾” MDF. The overall size is 14″ x 14″ and 8″ high, obviously designed to fit between standard framing at 16″ on center. The depth was a bit problematic for me as my old house floor joists are a mere 2″ x8″ joists. Not only is a 2″ x 8″ more like only 7 ½”, over time it shrinks and is closer to 7 3/8″. I simply had some 1/2″ thick frames made that lowered the speaker out of the cavity which just allowed the enclosure to fit.

The unit weighs almost 18 pounds and is nicely designed to clamp onto the drywall evenly distributing the load. The paintable magnetic screen is nicely flush to the ceiling. 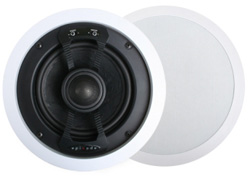 The ES-700 would be considered more typical of in-ceiling speakers, round with a single woofer and adjustable centered tweeter. Like the larger HT speaker, it also provided similar tone controls.

The large 8″ woofer is identical in construction to the 5″ units in the HT speakers, paper and Kevlar. Similarly designed is the tweeter however mounted on a “spider” X-bridge spanning over the woofer. This allows for an easier installer-friendly adjustment in aiming the tweeter. In fact the installer was seriously considered in the design; allowing the installer to use one hand to wire the speaker, screw-clamp it in place and adjust the tweeter without coming down from the ladder. 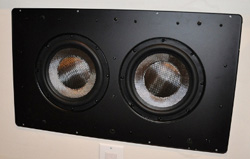 The brand new passive ES-SUB sports dual 8″ woofers, designed to be installed in a standard 2″ x 4″ stud wall with a depth about 3.75″. By separating the amplifier and crossover module, (connected to the subwoofer via standard line level speaker cables) Episode was able to keep the enclosure simple. Meant to be installed vertically at almost 24″ high, I was forced to mount them horizontally.

I opted to power the ES-SUB subwoofer with the Episode E-2100 stereo amplifier and since the subwoofer is an 8 ohm load, the 2100 gives me 300 watts bridged. 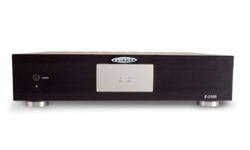 Although it is not specific to the passive subwoofer, The E-2100 is a 100 watt 2-channel amplifier into 8 ohms; it is capable of driving 4 ohm loads with 150 watts. Typically used in a multi-zoned installation, bridgeable to 300 watts, SnapAV nonetheless has teamed it up with the ES Sub.

The rack-mountable amplifier is solidly built with from the toroidal transformer and discrete amplifiers, to the crossover and gain controls as well as a defeating low pass filter. Included is a low voltage trigger input, as well as a trigger output for other components.

The front has indicator LED lights for channel status, which includes indicating trouble such as thermal overload.

I won’t turn this into an installation review, it had its challenges as a retrofit and I’m sure a professional would have done it quicker and easier than I. Having said that, snaking wires was most of the battle, the speakers went in without a hitch, other than the depth issue with the HT-700 I’d already mentioned – measure your joists!

The 14 gauge speaker wires, also from SnapAV all terminated at one location and I spent some time making cables to easily connect the package to the receiver, in this case the Rotel RSX-1550, currently under review. An OPPO BDP-83 handles the video source to the projector from Epson, the PowerLite Home Cinema 8100 onto a 106″ Dragonfly high contrast screen.

Take it from a guy who has had some impressive speakers at all price ranges through my theater/listening room over the years to claim the Episode front ES-HT700LCR handle themselves quite confidently. What I heard from the HT-650 box speaker was evident here, a nice balance and an even tonality.

In a critical sense, you must get over the sound coming from the ceiling, especially for non-video source music. The sloped front driver arrangement delivers a convincing audio experience with multi channel ahead of 2-channel.

For example, 2L Nordic Sound on Blu-ray disc provides what I hope will be inspiration for other studios to produce in this extraordinary format. Divertimenti played out on the Episode package is engulfing. Played just loud enough not to notice the somewhat directional path the sound takes to your ears – however I won’t say the soundstage suffers. But the clean and detailed image is handled well by the front LCR’s.

On the other hand watching video, sitting about 12 feet back from the screen is less of an issue, in fact a revelation, as the sound is so convincingly in front of you, coming from the screen, not the ceiling.

The Police Certifiable Blu-ray concert live in Buenos Aires is a must have if you enjoy live concerts on disc. The sultry version of “Wrapped Around Your Finger” is rich with cymbals and deep bass drums and Sting’s nasally voice sounds terrific. The Episodes do a great job of sensing the atmosphere of the outdoor venue.

There are very few movies that show off a surround sound system than the infamous “Echo” scene from the House of Flying Daggers. The drums resonate with a nice continuous finish and extension. The sound whirls around the room cleanly from speaker to speaker becoming thunderous. This is when I was convinced that Episode has developed a wonderful ES line of speaker, and including the impactful ES subwoofer.

I admit a purist might not consider a package like this and frankly I would have enjoyed comparing the floor Episode speakers (now available) to the in-ceiling. However this is a worthy and serious setup, one I’m very happy to show off. I’m glad my confidence in permanently installing the Episodes in my room has paid off. For me this is the best of both worlds bringing together my listening and viewing rooms.