A ‘First Look’ at the Paradigm Series 7 Mini Monitor Speakers

CEDIA EXPO 2011 is right around the corner, and among products being highlighted this year by Paradigm is the 7th generation of their legendary Monitor series speakers. A pair of Mini-Monitors from this new iteration was rushed to us for comment. What follows are our first impressions (a full review will be published at a later date). 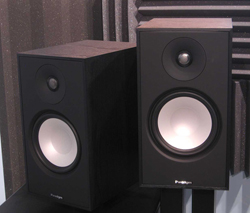 My very first pair of “serious” speakers some 20 years ago were 2nd generation Paradigm Titans, the proverbial entry level “2-way, 6 incher” of the day. Judging from their latest iteration, which is the 7th generation, it becomes obvious that big changes have been made. Paradigm has once again allowed their top-of-the-line driver technology to trickle down to the less expensive models: we are looking at a basic bookshelf speaker with tweeter and midbass drivers, which just a few years ago could only be found in their models that cost an arm and a leg. The aluminum tweeter has a critically shaped “horn” baffle and a wire mesh guard with a strategically placed disk of fabric at the center, the combination of which is said to shape and optimize the dispersion. The midbass cone is likewise aluminum and looks drop dead gorgeous with its light color and satin texture. The only thing that gives away the entry level position is the cabinet finish which, unlike Paradigm’s upper end wood veneers, is the ubiquitous vinyl wrap, but it is very well done with no blemishes of any kind. Paradigm obviously knows these things look good and that their owners will want to show them off: grilles attach with magnets, so they are easily removed and replaced should you wish to show your friends what the drivers look like.

Initial listening impressions across the board are very favorable. I set them up for stereo playback, and within a couple tracks, I noted bass so deep, that I had to make sure I had disabled my subwoofer! We can only surmise what the towers have in store for us. Imaging was highly localized, and the midrange was devoid of harmonics that would have otherwise turned it to mush. The highs were pinpoint sharp and detailed. The Minis seem capable of prodigious output, handling mucho watts, yet they won’t need as much as some of Paradigm’s other smaller speakers, these being a couple of dB more efficient. On the whole, they delivered a most satisfying listening experience.

The Series 7 Monitors are going to set an exciting new performance precedent at their entry level price points, which over the past two decades is exactly what we have come to expect from Paradigm. The legend continues…