Up NextMartinLogan Motion SLM X3 Soundbar Review
The Fluance AB40 High-Performance Soundbase is a substantial and well thought out soundbase that ticks all the right boxes and delivers great sound from a rather unobtrusive package.

What boxes you ask? Well, if you have a small to mid-sized room, a tv, and a device with Bluetooth then Fluance has you covered. It’s simple to set up, simple to operate and you’ll find enjoying yourself immediately.

I was pretty excited to do this review as I was always curious to see how a soundbase stacked up to a more traditional setup and how well I would adjust to having a soundbase as my primary source. Admittedly, I’ve never been a big fan of soundbars, how would a small box possibly replace my full theater set up? The easy answer in my head was that it can’t. Now, soundbases are bigger and deeper than soundbars which help bridge the gap. So, I was curious to see how they fared. One box do-it-all’s are nothing new, many ship with a laundry list of features and connections. Fluance have kept it simple with their soundbase keeping it as a stereo unit omitting HDMI but including a ‘3D’ setting to enhance the movie watching experience. Frequency response is also said to be 30Hz – 20KHz and they have supplied a handy graph on their website to prove this claim. Let’s see how it fares. 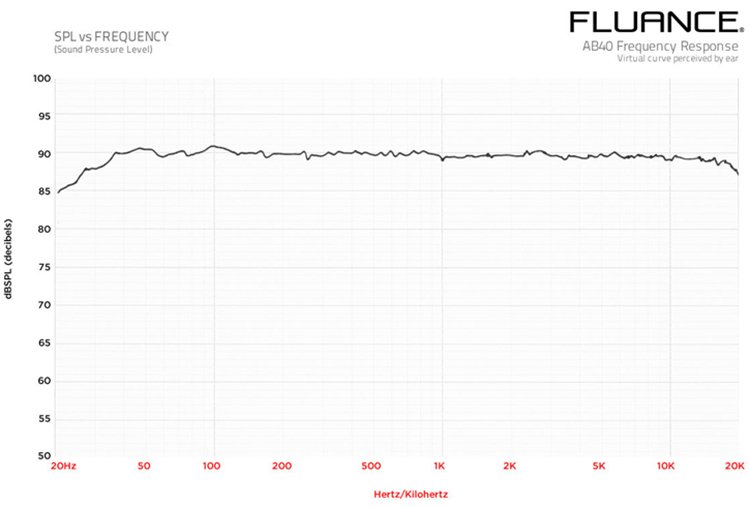 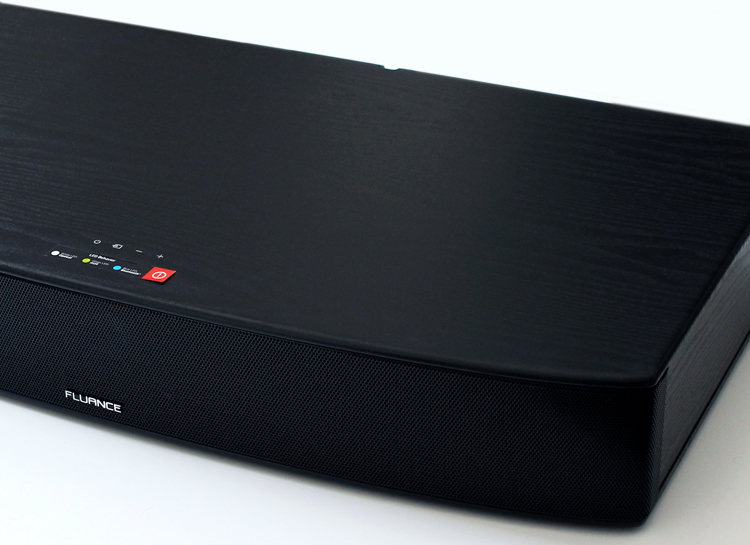 The Fluance arrived double carton boxed. Included in the package is a remote, batteries for said remote, an optical cable and power brick. The Fluance AB40 Soundbase is a fairly large, Stereo, 6 Driver TV Soundbase powered by a 90 Watt Class D Amplifier. The Fluance High Performance Soundbase measures 3.9 x 26 x 14 inches and weighs a sturdy 24 lbs. It’s somehow designed to accommodate a television that weighs 150lbs (though if you have one that heavy you should really look into a newer model). Soundbases, this one, in particular, are designed to support a tv with a centralized stand. Potential buyers should bear this in mind as many new TVs are styled with legs on the sides. My own TV is mounted on the wall so I didn’t encounter any problems in this regard. Burt you’d do well to measure the base of your tv stand to ensure that it does fit atop the soundbase so that it doesn’t fall off. Around the side close to the back are two ports, as first they look like handles and I almost carried the unit that way (thankfully I didn’t). The ports are actually bass reflex ports designed to acoustically enhance the sound.

A single LED supplies all the feedback for the unit, flashing once or twice to indicate different EQ and surround modes, and changing color for different inputs: blue for Bluetooth, green for AUX, and white for the optical input. There are capacitive touch controls on the top surface of the unit, but there is also a remote for more convenient control. The remote is a small, very light plastic one that has a nice curve that fits snugly into your hand. I could see it getting lost into the folds of your couch. An app for iPhone would be a nice touch here eliminating the need for the remote altogether. 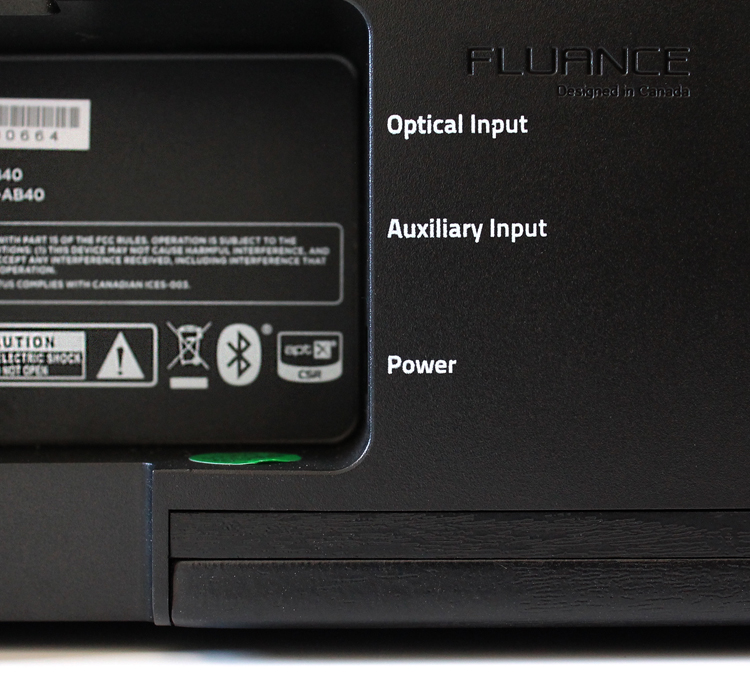 On the top of the unit, about 2" from the front, are four pressure sensitive controls. They are screened on in white and are: On/off, source and volume -/+. The pressure sensitive nature of the buttons is a nice touch, a light press and the Fluance powers on. Centered in the front grill of the unit is a LED which lights up and lets you know how you’re connected. White for optical, Green for Aux and Blue for Bluetooth. There isn’t a volume level indicator so you simply have to use your ears. Around back, the folks a Fluance have stitched on a little Canadian flag which I’m not ashamed to admit warmed my heart a little. There is ample room for each connection neatly tucked into an open compartment on the back. For most of my TV and movie listening I used the optical connection plugged directly into our cable box. Once set up I decided to give it a test run. My first impressions were really positive with no warm up period. The sound was full and clear. 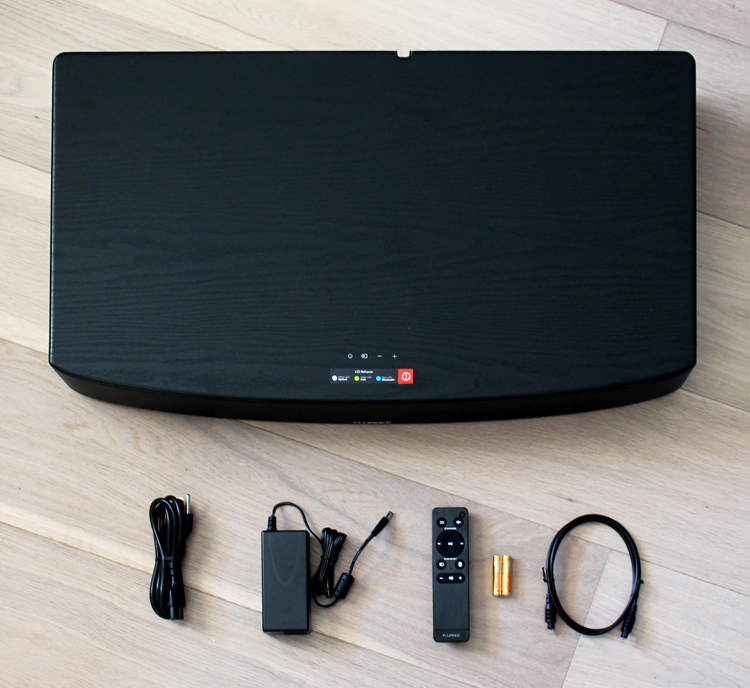 Over the next few weeks, I used it as my primary source for listening. I listen to a lot of podcasts while working and the Fluance AB40 was perfect in that regard. The Bluetooth connection was solid connecting to my iPhone 6s iPad mini and MacBook Pro. Nerd alert, I listen to Star Talk Radio with Neil Degrasse Tyson and his bass heavy, baritone voice sounds great though the Fluance AB40. For mainly spoken word content I switched between the having bass boost engaged, I found that it had minor effect and wasn’t really necessary. The AB40 immediately replaced both my Bose Soundlink Mini as podcasts were much fuller sounding and my living room hifi set up as the Fluance was just so easy to fire up and get going. 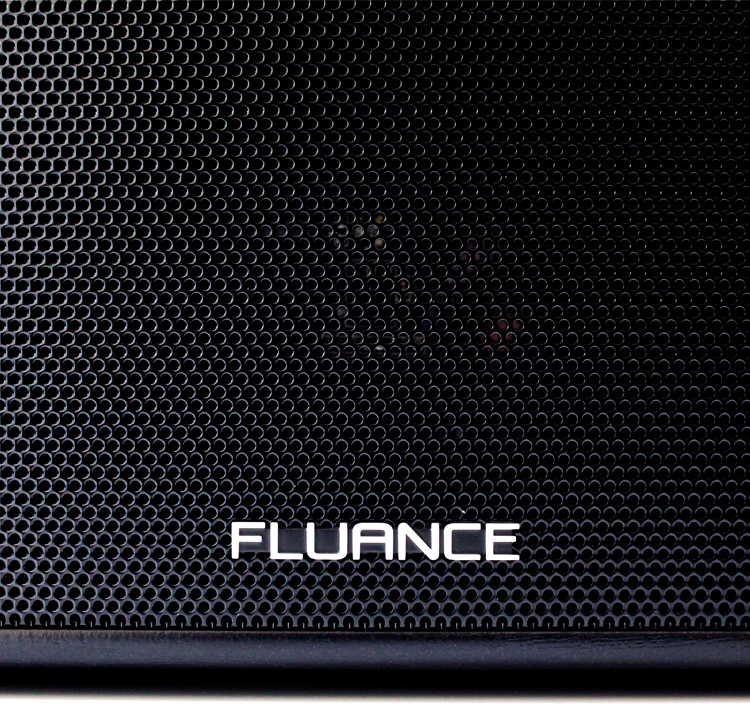 Sully, the biographical film starring Tom Hanks about the 2009 emergency landing of US Airways Flight 1549 is a slow burner of a movie with many quiet scenes and clips of a plane crash landing in the Hudson River. This is the perfect type of movie to showcase the Fluance’s skillset. Dialogue is again crisp and clear and the soundbase steers effects nicely. The subtle ambiance of the soundtrack is also projected well. When things get loud there is no audible strain on the unit. The 3D setting on the Fluance AB40 came into play here.

One press of the 3D button on the included remote and the light on the front of the unit turns blue. The sound opened up and seemed more spacious. Curiously there is a Bass boost function. With Bass Boost enabled it sounds as though the Fluance bloats the lower midrange and colors the sound giving you the impression of more bass. It came in handy during the plane crash sequences. 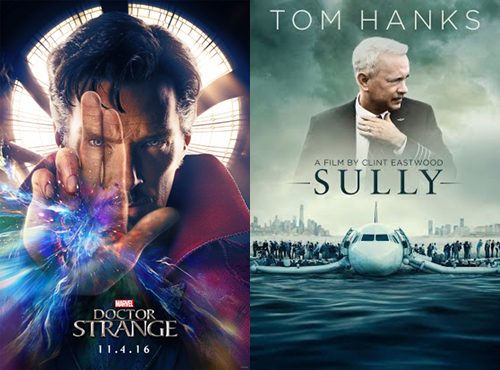 Dr. Strange, the latest Marvel movie to hit Netflix, on the other hand, is a bit of a different story. Things get loud frequently in this movie. The Fluance AB40 didn’t fall apart sonically here, but there was a feeling of something amiss while watching it. I decided against comparing the Fluance AB40 to my Theater set up and chose to instead move the soundbase from our living room to our bedroom to see if things change. It did quite a bit. I found that the Fluance AB40 fared much better in a smaller room. The sound was fuller and gave the impression of sounding much more powerful altogether. With the Bass Boost enabled, the low-frequency effects impressed. However, regardless of Fluance’s claimed frequency response I still found myself wanting a bit more bass weight during action movies. I would love to see a prevision for a subwoofer in future versions.

I’ve started rewatching HBO’s The Wire with my wife as she hasn’t yet seen the series and the Fluance is great here too. The dialogue centric show is clear and audible and never sounds shrill or lacking weight. The 3D effect really brings the show to life. The opening sequence for the HBO drama Big Little Lies sounded excellent. The music was full of life, the beats were full and the vocals were clear. I left the Bass Boost off during the show as it muddied up the dialogue.

So, with Podcasts and Movies covered, how is music? Every morning part of our routine is wake up turn on the radio and start getting ready for good music in the background. In general, the Fluance AB40 performed really well. Over an extended period of time, I completely forgot that the music was coming out of the soundbase and became immersed in the music. Music that I found myself listening to were the 80’s channel from Stingray Music (don’t judge me) an older mix entitled ‘Strange Games and Things’ by DJ Spinna, ‘Low-end Theory’ from A Tribe Called Quest, ‘Mecca and the Soul Brother’ from Pete Rock and CL Smooth and a current favorite ‘The Deep’ from Calibre.

It was only when I decided to play more bass heavy music that the Fluance struggled at louder volumes. With Ivy Lab’s ‘Can’t Say No’. The heavy bass seemed to strain the Fluance a bit. There was sufficient bass but when the volume was turned up there was noticeable distortion. I tried a few different Drum and bass tracks notably ‘Elmhurst Dub’ by Breakage, ‘Cocooned’ by Bungle and experienced a bit of the same result. This isn’t a deal breaker by any means, in a smaller room the Fluance AB40 goes plenty loud and does enough of a good job belting out my music just so long as you don’t push it too far. Music played via Bluetooth sounds just as great as it does via the optical connection and I would be lying if I said that I could distinguish which source was playing. 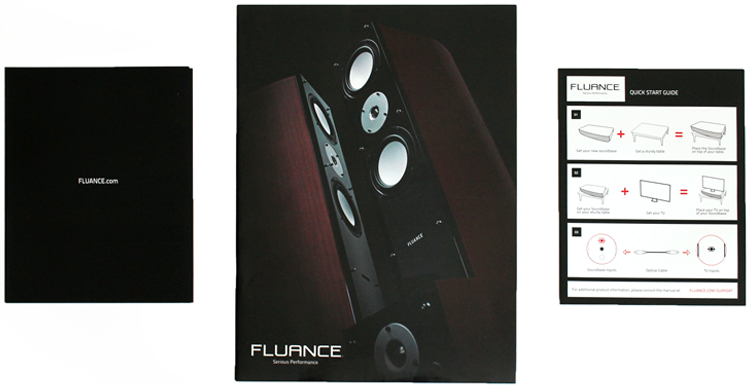 THE FLUANCE AB40 HIGH-PERFORMANCE SOUNDBASE truly is as the name suggests, high performing. In a small to mid-sized room it really shines making it the perfect solution for those wanting great sound from a neat and stylish package. At $249 the Fluance AB40 should be at the top of your list.

My excitement wasn’t misguided. Though I quickly realized that the Fluance AB40 was not a replacement for a full set up, it was however an amazing alternative. Whilst being fairly large it all but disappears onto a shelf or under a tv set. To my surprise the Fluance became my primary source day to day out of sheer convenience. Fluance was correct in keeping it simple with the AB40 High Performance soundbase. To my ears it sounded great.