The Italian designed and made brand of Sonus faber is well known over the decades for its timeless design and for producing some of the best sounding speakers in the industry. And through that timeline, their technologies have increased considerably, as well as the price points for their top-of-the-line offerings. Their highly regarded Aida sells for $130,000 per pair, and their flagship speaker known as The Sonus faber will set you back for a cool $250,000. So, given that, I was a little skeptical on how much technology and sound reproduction quality to be expected out of their $10,000 pair of Olympica Nova II speakers that I was getting in for review.

But after just a short amount of time with the Olympica Nova II, I discovered that Sonus faber has a tremendous amount to offer at that price range that is still high for a lot of people, but nowhere near the stratospheric highs of today’s premium offerings in the audio world. 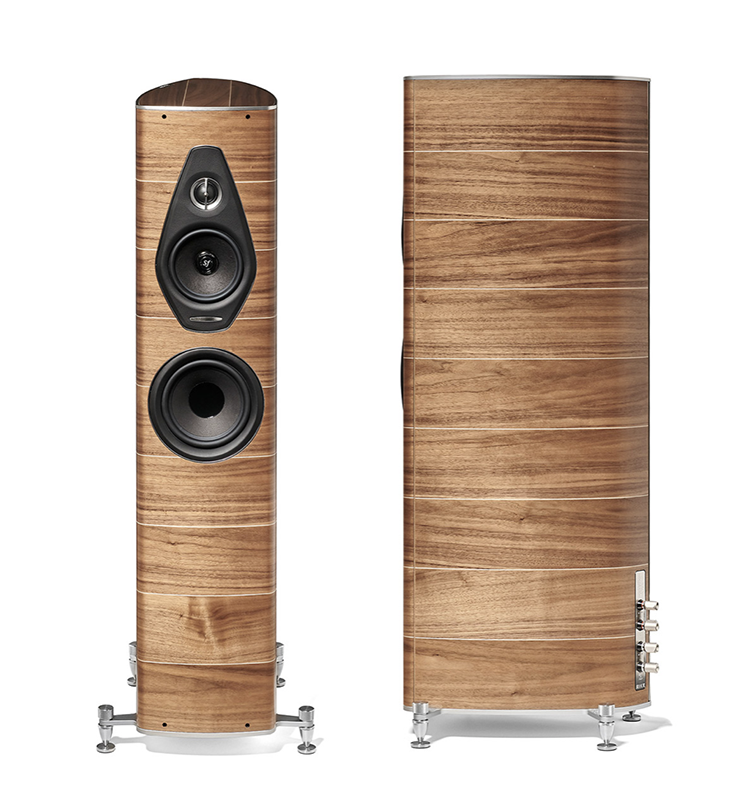 The Sonus faber Olympica Nova II loudspeaker that we have for review here actually came as a bit of a surprise for me. Originally, we had been planning to do a review of their up-market Serafino Tradition ($23,000 / pair), but they were unfortunately out of stock at the time. Given the stunning beauty of the red Serafinos, and how anxious I was to receive them, I was a little bummed to say the least. While I waited for them to become available however, the kind folks at The McIntosh Group (parent company of Sonus faber) offered me a pair of the Olympica Nova II to listen to and review in the meantime. I am very glad now that they made this offer because I would have missed out on a wonderful experience with a well-designed pair of speakers.

The Sonus faber Olympica Nova II is a 3-driver, 3-way floor-standing speaker, and it happens to be the smallest in their Olympica Nova lineup. But physical size and amount of drivers aside, the Olympica Nova all share the same design principles and general looks, which is really nice if you’re building more than a 2-channel system. The Olympica Nova series boasts 3 different floor-standing models, 2 center channels, a 2-way monitor, and a wall-mount speaker as well. 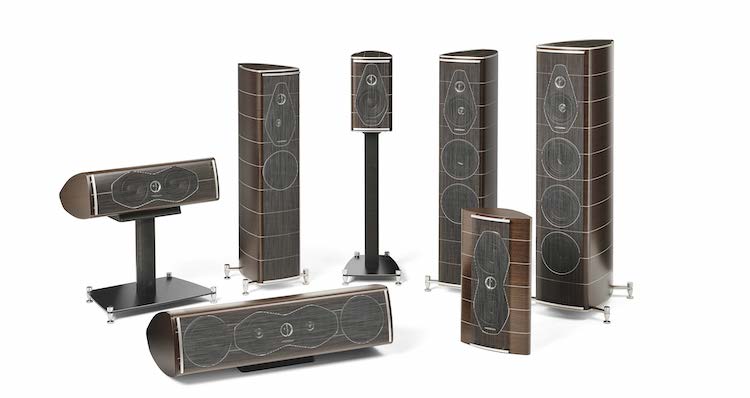 In all the models, you have a choice of finish between Walnut, or the Wenge as I had in for review. Either way you go, you’re getting the typical Sonus faber Italian flair which means they are as much of a work of art as they are stereo speakers.

If you’re like me and admire something more than the traditional boxy design of most speakers, you’re going to appreciate the lute shape of the Olympica Nova II. According to Sonus faber, “The lack of flat and parallel walls improves enclosure performance and maintains the typical asymmetrical lute shape of the first generation of Olympica”. The horizontal lines in the speaker provide not only a nice, artistic element to the looks but also a very striking contrast to the rest of the satin finish. And with the rest of the speaker being selectively adorned with machined aluminum components and the traditional leather on the front baffle, it blends old-world Italian craftsmanship with modern styling cues. 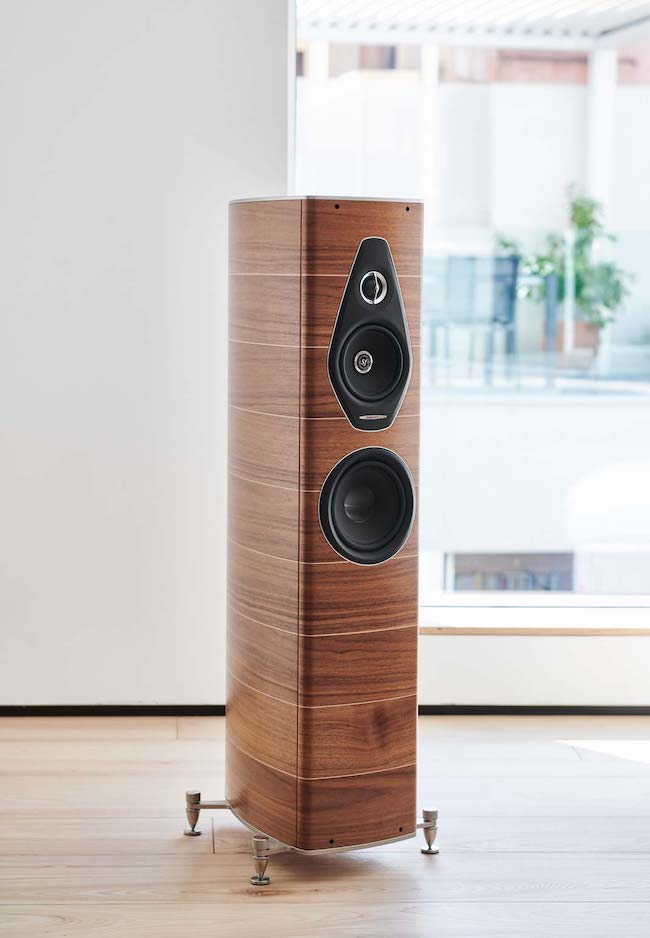 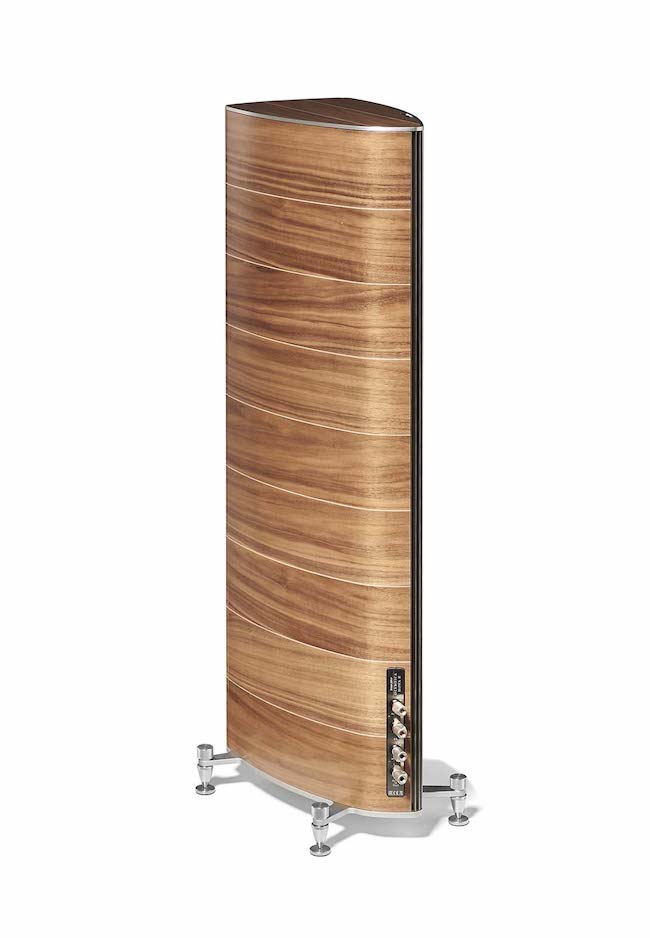 Since the Olympica Nova speakers are relatively thin, they have engineered a very stable (and great-looking) aluminum out-rigger base to provide stability. Once you securely attach the included spikes that come with the speakers, you’re all set up and ready to go. 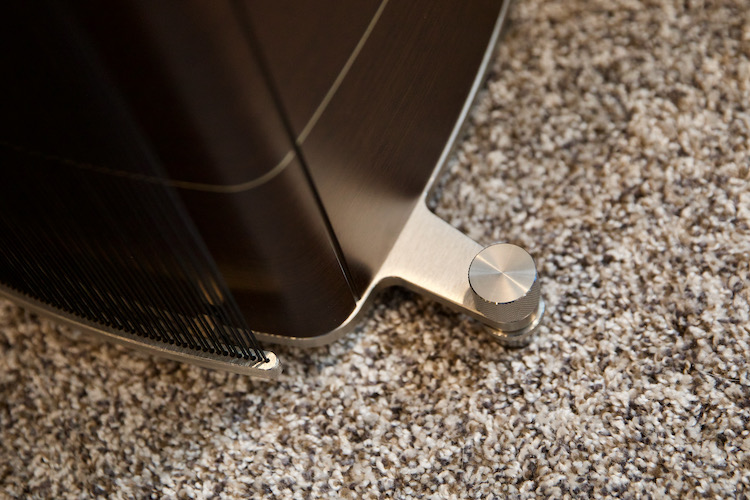 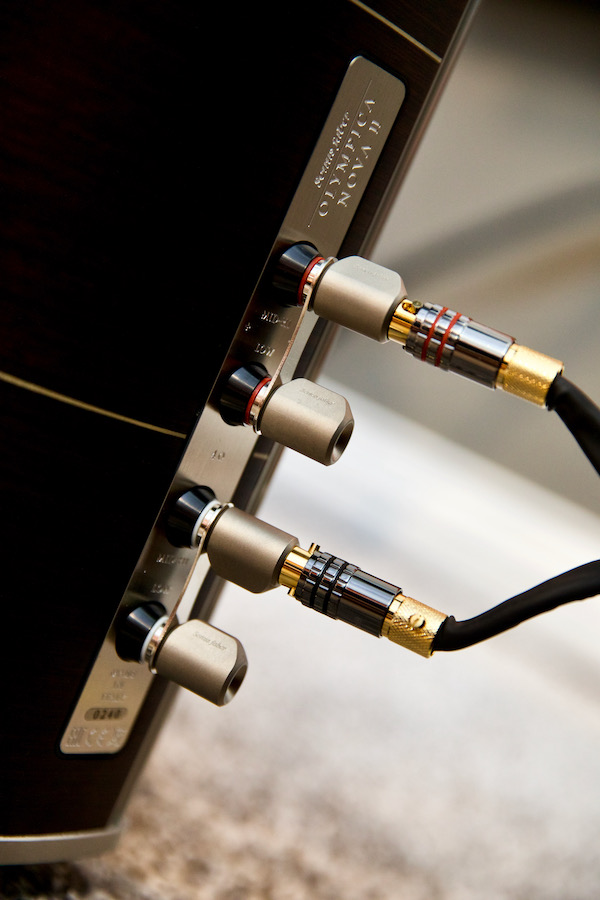 The binding posts are some of the best in the industry, and Sonus faber has provided 2 sets for those wanting to bi-amp or bi-wire them. They look great and work quite well!

On the back of the speakers, running from top to bottom, you will find a solid piece of extruded aluminum that is part of the Stealth Ultraflex™ system, an extremely low turbulence porting system inherited from the upper echelon Homage Tradition series. With this, you no longer have an unattractive port at the back of the speaker, or the “chuffing” sound that many times comes with it. 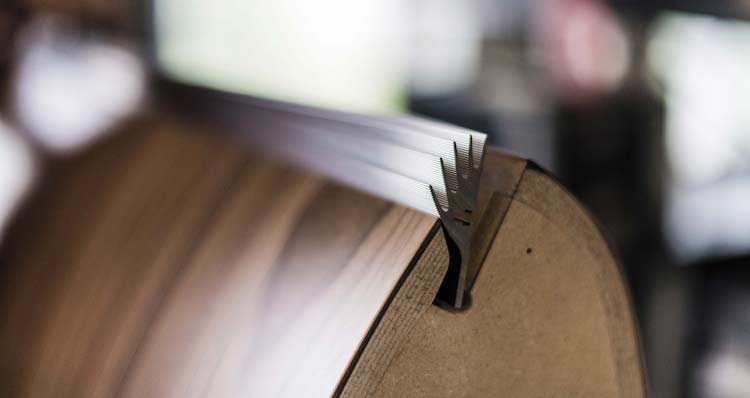 This is the part of the review process that I either love or hate, and it’s directly related to the size, weight, and packaging of the item that I am reviewing. The trip from my garage, through the house, and down a flight of stairs to my listening room/rec room/bar/, theater can seem like a mile when lugging huge speaker boxes in particular and is even worse when going back up. Fortunately, with the Sonus faber Olympica Nova II speakers, they’re only 40” tall and weigh in at a relatively svelte 67 pounds each. And in typical Sonus faber fashion, there’s no wasted space in the boxes, so they aren’t very difficult to maneuver.

After just a few minutes of unboxing, removing the protective covers, and installing the nicely designed carpet spikes that are packaged in a separate accessory box inside the main speaker box, I had them upright and in their place. The Olympica Nova II also comes with Sonus faber’s traditional “rubber band” style of speaker grills that when installed, allows you to clearly see the drivers (a feature that I really like). Also, in the accessory box is a very nicely done owner’s manual and booklet. 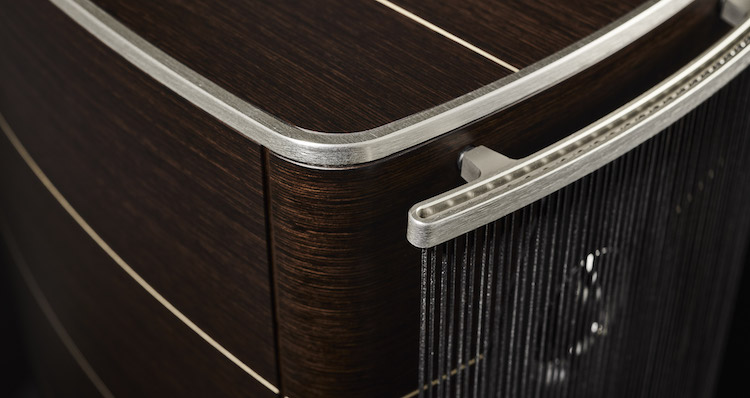 In my review of the Sonus faber Electa Amator III speakers in 2020, I learned that they liked to be placed relatively wide in my listening space and toed-in directly to my seating position. So, with the Olympica Nova II, I started them in the same fashion, and after a bit of trial and error, I found the best sound was produced in almost exactly the same place as the EA III. My final placement measurements had the front baffles at 67” from the back wall, 35” from the sidewalls, 102” from each other, and about 108” from my seating position. After letting them break in for a few weeks (with a generous dose of Tellurium Q’s System Disc), I was ready to sit down for some serious listening.

I must admit that I wasn’t sure what to expect when I got the opportunity to review the Sonus faber Olympica Nova II speakers. They’re the same price as the much smaller Sonus faber Electa Amator III’s that I had recently reviewed, so the natural bias or conclusion before ever plugging them in is that being a floor-standing speaker at the same price as the monitor, there must be something that you’re giving up in sound, build quality, or other. And since they are the smallest floor-standing speaker in the Olympica Nova series, which falls #3 in the pecking order behind the Reference series, then the Homage Tradition, I kind of assumed that it would be a reasonable step down in performance. 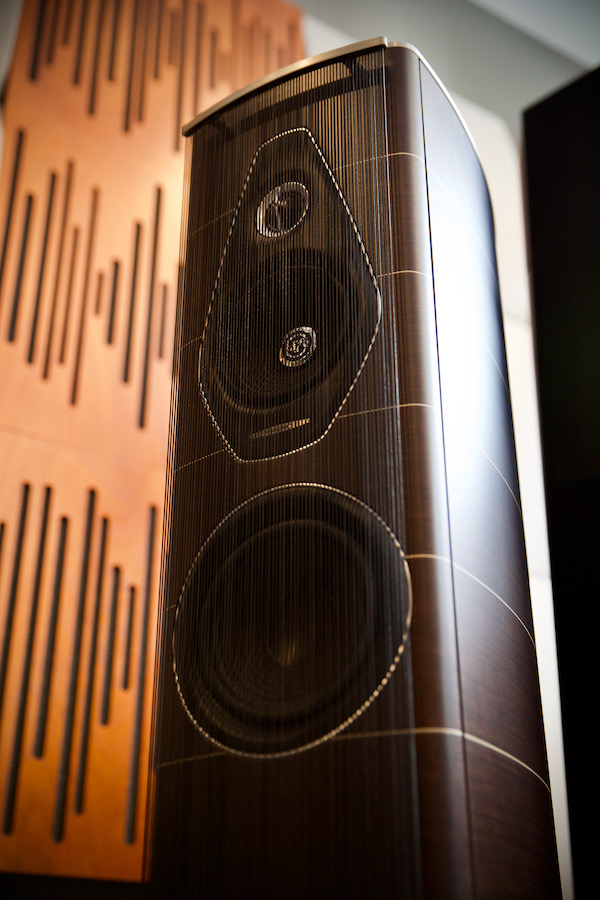 But when I really settled in for some serious listening, the first thing that hit me like a ton of bricks was the wall-to-wall soundstage that they projected! It’s pretty easy for a large set of speakers to fill the entire front wall with sound, but for a relatively small set of speakers like the Olympica Nova II, it was beyond impressive. Many times, with this type of presentation, it’s easy for the center stage to collapse a bit, losing the focus of the singer in particular. But that didn’t happen at all here.

I’m relatively new to the Norwegian artist Ary but listening to her title track on her album The Sea, I find her beautiful voice hanging in the air in a large center stage, with the background music projecting out past the outer walls and even behind me at times.

And in another example of the Olympica Nova II’s ability to reproduce female voices with stunning clarity and realism is in A Wonderful World by Friend & Fellow. Constanze Friend’s voice projects very largely in center stage, while Thomas Fellow’s guitar work strikes piercing notes that appear to emanate from the entire front wall. The disappearing act that these speakers are capable of has a strong resemblance to what one expects out of very high-end 2-way monitors.

During the review process I reached out to lead designer Livio Cucuzza from Sonus faber to discuss the sound characteristics of the Olympica Nova lineup, and where they shared similarities with other speakers within the brand. Livio informed me that the Olympica Novas shared the same crossover topology as the higher-end Homage Tradition speakers ($17k~$30k), which explains why they seemed to punch well above their weight class. I currently have that pair of Sonus faber Serafino Tradition speakers in-house for a future review, and I can say that there’s a definite trickle-down in technology and sound characteristics from the $22k Serafinos to the $10k Olympica Nova II. 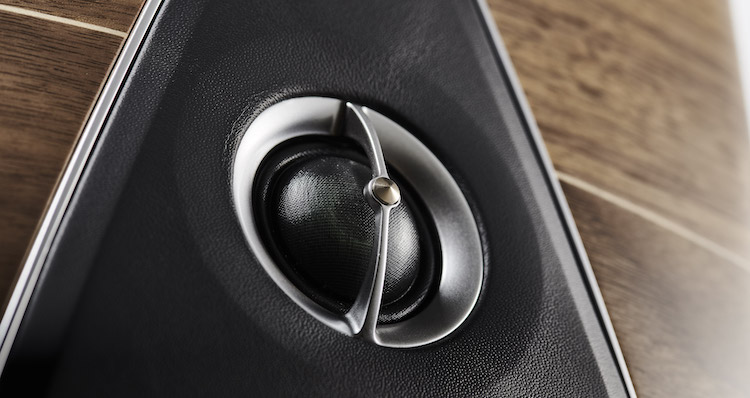 While the front soundstage of the Nova II was impressive, it didn’t stop at that. When I played Shpongle Falls by Shpongle, the imaging and 3-dimensionality became downright spooky. If I would have put one of my friends or family in the main listening chair and bet them money on whether the surround speakers were turned on, I would have walked away with some cash in my pocket. At times during the song, you are completely enveloped in sound as if it were being played through my Dolby Atmos system. Granted, this song is mastered to play as such, but you’re not always going to achieve this level of 3D playback that the Olympica Nova II did with apparent ease.

Another positive trait that stood out with the Nova II is that the great soundstage and 3D imaging only slightly dropped off at lower volumes. This is a sign of superb design and engineering coupled with a tremendous amount of tuning by ear during the development stages. 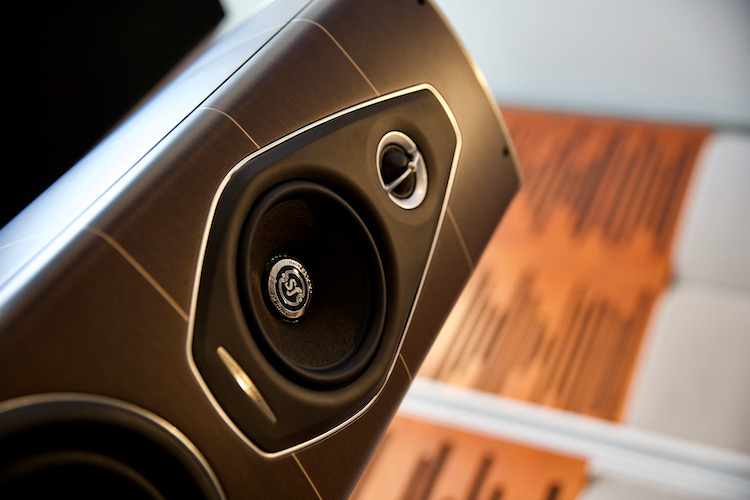 If you’re buying the smallest floor-standing speaker in the Olympica Nova lineup, you’re probably not looking for the highest amount of bass output. The Nova II can go cleanly down to 40 Hz, and for much of the music I played, I found it to be enough. With the mighty McIntosh MC611 monoblock amplifiers (600 watts) driving the Olympica Nova II speakers, there was plenty of weight in the lower registers even when playing a demanding track like Cousin John by Marcus Miller. If you wanted more low-end extension, you could always go with the bigger brother options of the Nova III or Nova V, or simply augment the low end with a subwoofer or two. 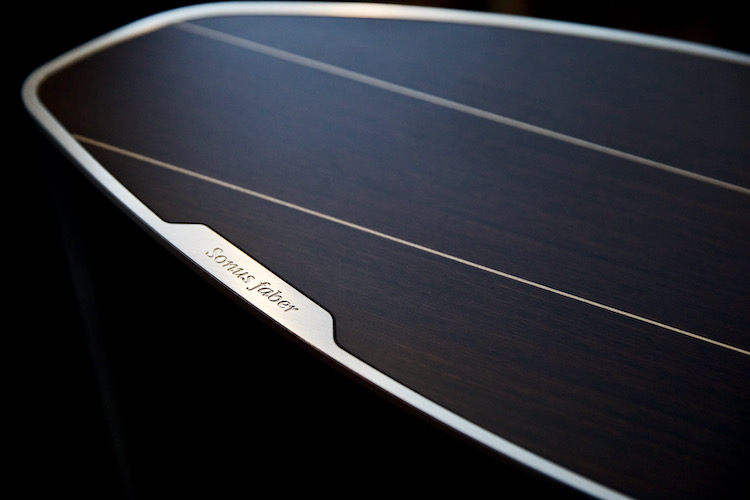 The Sonus faber Olympica Nova II speakers provide perhaps the best combination of performance and looks for the money that I have encountered.

It’s funny how you can go into a review process with one assumption of what a product is going to be like, but throughout and after the review, you find yourself with a completely different perspective.

I made the mistake of thinking that even at a $10,000 price point, a speaker within the 3rd tier lineup from Sonus faber was going to be good, but a consolation prize, so to speak, relative to their big-boy speakers. When you have choices available all the way up to $250,000, just how much are you really going to get for only $10k?

Well, the answer to that is a LOT!

With the Sonus faber Olympica Nova II, you are entering the realm of true high-end speakers, and are getting some of the most musical and 3-dimensional sound that you may find around that price point. And on top of that, you are getting beautiful industrial design and finishing that will match with just about any décor that you can imagine.

The Sonus faber Olympica Nova II speaker didn’t just leave a positive impression on me, it changed my entire perspective on what I personally value out of speaker design and performance. Color me impressed!