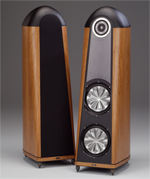 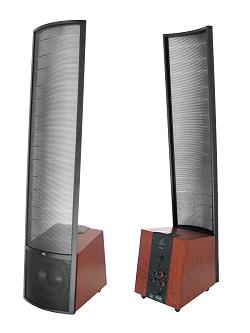 When you love your job, you can consider yourself very lucky, and I consider myself very lucky. I was trained as a neuroscientist and did research for years back in the 1970’s and 1980’s. I then stopped the research but continued in the field by becoming an editor of medical journals. Although I like editing journal articles in the field of science and technology, I would not like to go back to being in an animal research laboratory. Working with hi-fi equipment is so much more fun than culturing neurons in plastic dishes.

One of the main benefits of being an audio writer is having so many new toys to play with constantly. I have often referred to my love of flat panel speakers, and Electrostatic Speakers (ESLs) are one of those.

My first experiences with hearing ESLs included MartinLogan decades ago. Recently, I reviewed the MartinLogan Purity.

In May, 2008, MartinLogan released their newest model, called the Spire. It is larger than the Purity, and has a 10″ cone woofer to handle the frequencies below 320 Hz, which makes this a hybrid. While the Purity had built-in amplifiers that drove both the ESL panel and the woofer, only the woofer in the Spire is powered.

The ESL panel is 43″ high by 12″ wide, so it has a rather big surface area. It’s not really big enough to be a full-range ESL, but it’s getting there. Most full-range ESLs are about the size of a door.

Like all ESLs, you need an AC wall socket to plug them in so that the panel membrane can be electrostatically charged. This also supplies power to the woofer amplifier.

The base of the Spire has the woofer enclosure, and on the back are the connections. You can also see a dial near the mid-top of the enclosure, and this lets you boost or attenuate the bass by ± 10 dB. This is important because ESLs are very sensitive to room placement, and it’s necessary to be able to bring the bass into line with what the ESL panels are doing. 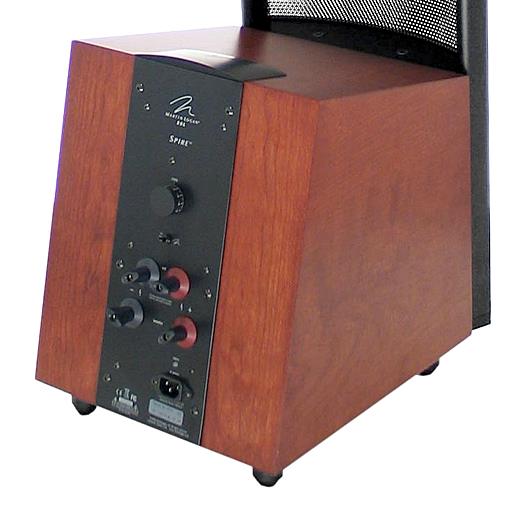 Here is a close-up of the dial, and you can also see the jumper clips that connect the ESL panel to the woofer. There is a small toggle to turn off a blue MartinLogan logo that is on the top of the woofer enclosure, as it can be seen through the translucent ESL panel. 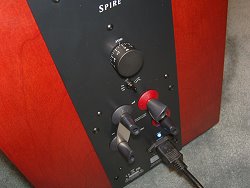 The stators are curved and are perforated with small round holes. The shape and edging of the holes were researched in order to keep edge diffraction to a minimum. There are some narrow strips that keep the two stators spaced at tight tolerances. 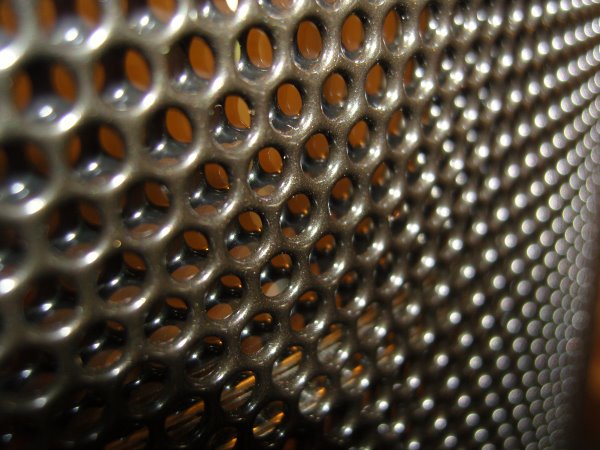 Currently, I am writing a technical series on Vinyl vs. CD, and the Spires are some of the speakers that I have been listening to during these tests.

I have to say first of all, that the Spires are some of the best ESLs I have yet heard, and they belt out an amazing amount of SPL, all the while maintaining clarity, for their size. I really did not expect them to be able to play this loud. Obviously, lots of engineering developments have occurred over the years.

I listened to about a dozen albums with the Spires, including both LPs, CDs, and SACDs. Here are some highlights.

When one thinks of classical organ, E. Power Biggs comes to everyone’s mind. I obtained an SACD release of his 1977 recording of serveral Bach works, played on four antiphonal organs in the Freiburg Cathedral (Sony 6-9699-87983-6-6). 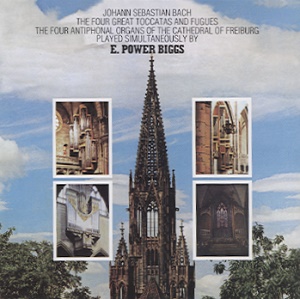 I don’t think I have ever heard organ music like this. The ESL panels delivered the intense upper registers of the pipes, with fine detail, and the woofer did not break up with the pedal tones. And, I cranked things up quite a bit, expecting to hear noticeable distortion, but it just did not occur. The clarity was simply amazing. Very natural too, no odd timbre. Of course, ESLs have to be carefully placed, and I had them several feet out from all walls.

EMI recently released some of Herbert von Karajan’s legenary works with the Berliner Philharmoniker on a two-CD set (EMI 5-099951-593421). 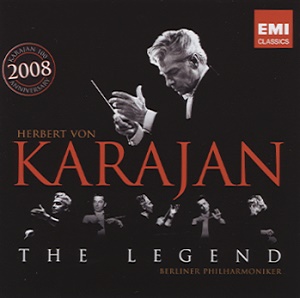 The music on these CDs is all terrific, of course, but let’s take the opening track of CD-1, Ravel’s Bolero. The opening is so quiet, you have to check to see if the Play button on the CD player was actually pressed. Snare drums tap the rhythm throughout the piece, but one by one, other instruments join the melody until a huge climax at the end. The Spires kept each instrument separate and easily distinguishable, never losing their composure as the music continued to build. It started out at just a watt or two, and by the end, the meter on the McIntosh was reading about 120 watts per channel. That is a lot of dynamic range for a speaker of modest size to deliver. But, they sure did the job.

For all distortion tests, a bandwidth of 80 kHz was used.

At 1 kHz, 100 dB, and 1 foot from the middle of the ESL panel, THD+N was 0.21%, and was primarily second order. This is important, because many speakers out there have primarily third order harmonics, and even-ordered harmonics are easier on the ears than odd-ordered harmonics. Indeed, when I listened to the Spires at high volume, it did not bother me at all.

I was not able to measure THD+N vs. Frequency in the upper frequency regions at 100 dB using my standard tests because the impedance at 20 kHz is so low, the amount of current delivered at a single sine wave frequency was overheating the resistor in the crossover network. So, I performed a series of other tests, and determined that, at 100 dB output and 1 foot, THD+N is about 0.5% from 100 Hz to 20 kHz, and is 10% at 30 Hz, decreasing to 0.5% at 100 Hz. This is excellent performance.

For the room response, I used a distance of 2 meters. I measured the response with the bass control setting at 0 dB and at – 10 dB. You can see the response is quite flat, with the one room mode bump at 60 Hz. Judging from these curves, if I were to leave the speaker in this placement, I would adjust the bass control to about – 5 dB. Obviously, this is a very useful feature to have.

I did not measure the impedance or phase, because the power amplifier input is in the circuit parallel with the speaker binding posts.

MartinLogan’s new Spire electrostatic hybrid speakers are fabulous in my book. They play loud for their size, with great detail in the music, and the distortion profile seems to be primarily second order, which is pleasant rather than irritating as it would be if it were primarily odd-ordered. ESL technology has obviously come a long way since I first heard MartinLogans back in the early 1980’s, and I am delighted with the improvements.