The UK made PMC twenty line is exceptional for long-term built quality and craftsmanship, clean dynamic sound heightened by deep bass attributed to their proprietary ATL technology. Regardless of the type of music, the monitor-sized twenty.22 makes it all sound exceptional. 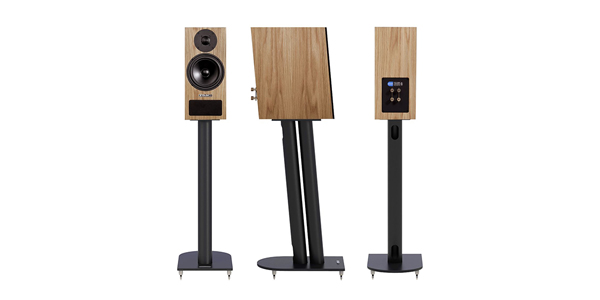 Maida Vale is a beautiful part of London in the City of Westminster known locally as Little Venice for its canals and permanently docked boathouses lining the waterways. Recently attending my son’s wedding in Maida Vale, I came across the home to the legendary BBC Studios. A short walk from my hotel near the Warwick Station of the London Tube Underground train system, I was surprised to find it on Delaware Road, like many in Maida Vale, a pristine residential street. I’ll admit I wasn’t looking for the famous studio and found it by accident, but it spans the major part of the block and hard to miss. It also happens to be a short walk east to EMI’s Abbey Road studios.

It was here that then BBC engineer Peter Thomas developed the first studio monitor in the BB5 that lead to his partnership with Adrian Loader. The Professional Monitor Company or PMC Ltd. was formed in 1990 and since then has developed both professional and residential speaker lines. Included is the review set of the twenty series in the twenty.22. PMC refers to the newest line as twenty for a couple of reasons; first it had been in business 20 years when developed and also because they offer a 20 year warranty. 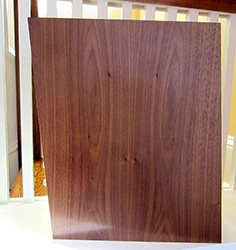 The twenty line includes two monitor sizes, three floor standing loudspeakers and a center channel as well. The twenty.22 is the larger of the two monitor sizes, the other being the .21. The entire line shares a similar architecture in their trapezoidal shape which features a sloping front and back. The design is relatively conservative beyond that.

The PMC twenty.22 version I received is a beautiful matte-finish walnut but available in Diamond Black and Amarone (looks like a dark cherry). The 18 mm thick Medite cabinet structure is veneered on both the outside and also inside to maintain long-term stability.

In general terms, the unit weighs almost 18 pounds, stands slightly more than 16” tall, 7” wide and over 14” deep. The proportions especially the depth is critical for a reason, it has a lot to do with the internal construction and more importantly the acoustic concepts employed, more on that later.

As I mentioned, the obvious design feature is the trapezoidal shape – with the sloped front and back, opposite walls are parallel. The prime reason may be for time alignment of the two drivers, but the shape also makes the cabinet much stiffer and more stable. The angled cabinet does also make the twenty.22 a bit more stylish frankly, with the perception of speed or motion. 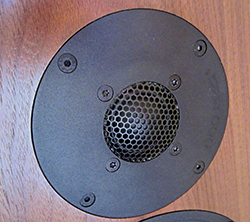 The two drivers included are newer versions of pervious drivers developed closely with SEAS of Norway. The 1.1” (27mm) proprietary Sonolex, ferro fluid cooled, multi-coated fabric soft dome tweeter is crossed over to the woofer at 1.8kHz. PMC refers to the 6.5” woofer as lightweight doped, natural fiber further developed from the successful fact line. 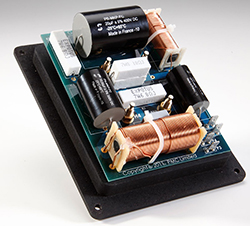 The hand-made glass-fiber crossover board is a thick military grade and uses copper tracks. To optimize each driver’s frequency response; PMC employs 24dB per octave slopes achieving a sensitivity of 90dB, making the twenty.22 relatively easy to drive. On the rear, the bi-amp/bi-wired terminal posts are connected via gold-plated jumpers. 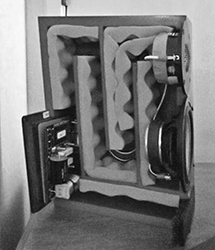 You cannot talk about any PMC speaker without its’ major impetus, the ATL or Advanced Transmission Line. Mr. Thomas recognizes that the major issue in most speaker design is con-trolling distortion. PMC is specifically concerned with the resonance distortion from the back of a bass driver and removes that distortion during the driver excursion. What is left travels through the line and outputted through the port effectible acting like a bass radiator. The results are deeper bass and in the twenty.22 down to 40Hz, depending on your room of course.

This is not merely a vented cabinet, the ATL design is based on the size of the cabinet and the drivers used. By design, the length of the line is a factor of 1/4 the wavelength required. In the twenty.22 the ATL length is listed as 2 meters, or just over 6 feet which explains the size of the cabinet and particularly the depth. PMC’s propriety foam lines the entire length of the transmis-sion line. The goal then is accuracy, clean reproduction and controlled bass.

Setup and Listening of the PMC twenty.22 Monitor Bookshelf Speakers

I didn’t ask for the monitor stands available for the twenty.22. I’m not sure if it would have made any sonic difference with height placement or stability, however they sure look cool, sloped as the speaker enclosure itself. I placed the speakers relatively close together about 6 feet apart, slightly toed and sat back about 8 ft. The limits of my current listening space.

On hand were several amplifiers but I mostly used English-made Cambridge Audio gear in the Azur preamp and amplifier separates. Cables weren’t from England but from New England or more specifically Maine, Transparent Audio.

Just from habit I always allow a bit of break-in before any critical listening. 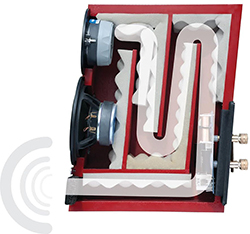 The effects of the ATL are immediately apparent while playing Steely Dan’s Gaucho on SACD. The opening bass guitar riff on Hey Nineteen has a remarkable weight and strength. The title track Gaucho is very much like the rest of the album, tightly engineered, the opening sax is suf-ficiently brassy yet warm. ….the twenty.22 was impressively full-bodied, compelling and musi-cal. Played at lower volume, the speaker never wavered from executing a full dynamic range.

Violinist Anne-Sophie Mutter accompanied by Lambert Orkis on piano playing Beethoven’s Spring and Kreutzer Sonatas was convincingly poetic, each instrument taking turns for center stage engages the listener in an intimate duo captured very well by the twenty.22. The piano has enough warmth and depth but the speaker exhibited tight transient response and clean ex-tension.

The elegantly recorded Wretches & Jabberers opening track, The Reasons Why performed by J. Ralph is seamless from top to bottom, the acoustic guitar is vibrant ..spacious emotionally at-taching me to the music.

Al Jarreau and Kurt Elling’s duet of Take Five on the CD Legends of Jazz both emphasizes What struck me was not only how well the voices sounded, but how well it captured the instru-ments in an almost spacious, intimate setting. I found no coloration, at all.

Wanting to hear another female vocalist, Diana Krall’s It Could Happen to You was rendered sweetly, but what I kept hearing was not her voice, that was fine enough, but once again I was hearing the space between instruments. Clean percussions, accompanying brass section was palpable, perfectly placed stage right.

I’ve often used the cello as an instrument of critical listening, the cello can sound sweet and airy but also can reach quite low in the spectrum. Yo-Yo Ma’s Vivaldi’s Cello CD with the Amsterdam Baroque Orchestra led by Ton Koopman has a few tracks that allow Ma’s cello to shine. The short but sweet rendition of The Four Season’s Largo from Winter played nicely on the twen-ty.22, not quite reaching the depth and three-dimensionality I was hoping for, but I really was looking for the icing considering how well I’ve enjoyed everything else on the twenty.22.

Not giving up on the cello, I have one of the deepest cello performances I’ve ever heard in the Gary Karr’s version of O Holy Night (after all tis’ the season as I’m writing this) from a demo CD recorded for Usher. The performance is big, very big with a cathedral ambience. The cello per-formance is much fuller and rendered deeply on the PMC monitors. 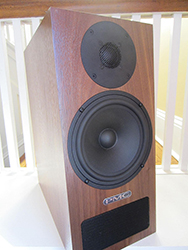 Over the last couple of years I’ve become much more familiar with the PMC brand hearing sev-eral of their new twenty series in various locations, shows and showrooms. I wouldn’t hesitate to own a pair. As a monitor speaker, it’s not inexpensive but the twenty.22 never disappointed me, I seriously looked for the faintest issues, but with no luck frankly. The ATL is the real deal, at medium to high volumes I detected none to little distortion.

To most PMC may not be an “audiophile” household name – perhaps only true on this side of the pond, I know they have a stellar reputation in the UK, or perhaps because the company has roots in the professional studio environment of which still very strong today. That says a lot. PMC continues to be used by those that want a reference sound, accurate and revealing.

What we listen to at home is more about the emotional connection we have to our music, PMC and specifically the twenty.22 hits the mark. The speaker is easy to set up, relatively easy to drive, forgiving in room placement and simply one the most dynamic monitor-sized speakers I’ve ever auditioned.