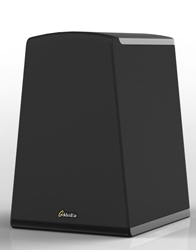 My first experience with GoldenEar was at a dealer show in Raleigh, NC. Many vendors were in there showing off their new wares: Wilson Audio had the Sasha driven by Audio Research tube monoblocks, Revel was showing off their Salon 2s with Mark Levinson electronics, and John Atkinson from Stereophile was there talking about the horrors of dynamic compression on modern albums. Also tucked away into the smallest room in the store was Sandy Gross, showing off the first speaker from the newly founded GoldenEar Technology.

With some McIntosh gear driving them, the $3,000 towers were incredibly impressive, even after having just listened to $50,000 systems in most of the other rooms. I stuck around the room for multiple presentations, and to get a better seat, and kept watching as people left impressed by the sound and astounded by the price. Once the speakers started shipping and the reviews started coming in, it seemed that the critics were in agreement as well.

As GoldenEar president Sandy Gross says, his desire is to take the sound he manages to get from far more expensive speakers, and engineer that into his own products at a much lower price. With his Triton line of towers he has certainly succeeded, but how good could he really make a $400 bookshelf speaker? They sure sounded good when I heard them at the CEDIA Expo, but those shows are never an environment in which to make any final declarations. With a pair in hand, I was ready to find out.

Design and Setup of the GoldenEar Technology Aon2 Bookshelf Speakers

The Aon2 is a nice looking, though slightly odd-shaped, bookshelf speaker. Inside the speaker features a High Velocity, Folded Ribbon tweeter, a 6″ bass/midrange driver and dual 6.5″, side mounted passive radiators. Despite the small size and small bass driver, the Aon2 still claims response down to 42 Hz, which I measured in my room as well. The top of the speaker is a glossy plastic that you can pop off if you wish to remove the grill cloth, or to install the wall mount. 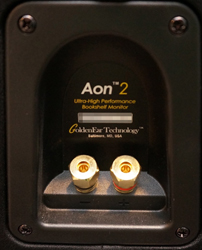 The heart of all GoldenEar products is the High Velocity, Folded Ribbon tweeter. It might look small, but inside it looks more like an accordion than a traditional dome or ribbon tweeter. Unlike those that move air by pushing it with the surface, the folded ribbon squeezes out the air, which it can do more efficiently for its surface area than traditional drivers can. This gives you much of the speed and transparency of a ribbon tweeter, without the need for it to be massive in size.

Inputs are a simple set of gold-plated binding posts on the rear. With a nominal impedance of 8 ohms and 89db sensitivity, the Aon2 should be a pretty easy speaker to drive to reasonable listening levels in your room. There are some small feet on the bottom of the speaker to provide a bit of isolation from a shelf, though you’re still going to get the best sound from a dedicated stand.

The GoldenEar Technology Aon2 Bookshelf Speakers In Use

After letting the Aon2 sit around for a week due to other commitments I finally set it up one Saturday night. After hooking it up and spending a few seconds positioning it, I just grabbed the first CD I had on hand to fire it up and make sure it worked fine before getting off to sleep. Using the remastered Let It Be from The Beatles, I jumped across the first few tracks before getting to the title track.

After a few seconds of listening, I realized that bedtime had to wait. Paul McCartney’s voice hung there between the speakers, hovering right over his piano and in the center of my room. His vocals were clear and crisp, and the notes of the piano had wonderful weight and decay to them as the song continued. The Aon throws a deep, wide soundstage and really brings Let It Be to life. It was a very impressive start for the Aon2s.

I moved onto some of my favorite recent albums from Radiohead. I love the music from Radiohead, but the CDs are mastered poorly compared to the vinyl editions, but I thought I would give them a try on the Aon2s. I am actually a bit disappointed that the Aon2s render the content that is on the album far too clearly: The top end is really harsh, everything is too loud, and I get to hear exactly what is on the disc. For poorly mastered CDs like this I often play them back through the cheapest system I have, as the hardware will mask the flaws of the CD better, but the Aon2 is too resolving to use for this. 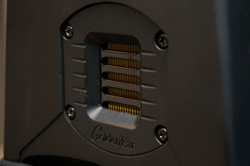 Moving to a much better mastered title, the recent SACD release of Counting Crows’ August and Everything After… the Aon2s could finally shine. Now I don’t hear anything harsh at all, but I have a large, wonderful soundstage coming out from between the speakers. Adam Duritz’s voice is as clear as it can manage to get, and instruments are located with pinpoint accuracy. The bass is nice and deep, bringing out the drums on the album, though not as tightly controlled as a powered woofer is. The harshness that is present on the Radiohead recordings was gone thanks to much better source material.

One area that the Aon2s are sensitive about is the vertical dispersion of the tweeter. I have them on 30″ tall Sanus Ultimate Foundation stands that do a very good job of isolating them, but the tweeter height is a little too low in my regular chair. Switching to a different chair brought the tweeters in-line with my head and produces a much better sound. The horizontal dispersion is not nearly as sensitive to my ears, but to get the best out of them you really need to get the tweeters very close to ear height.

Moving from my two-channel integrated system, I installed the Aon2 into my home theater system as the front channels, with a Marantz AV7005 preamp and a Halo A31 power amp in front of them. The Aon2 really does benefit from the Halo A31, as they open up more with a larger, more defined soundstage and a bit better definition in the bass. The soundstage was wide and deep, though the vertical height of the tweeter relative to the ear remains important to get right.

The Aon2 also really benefits when paired them with a subwoofers. Passing off deep bass duties freed the Aon2 to concentrate on everything above 100Hz and opened up the picture even more. The tweeter remained as detailed and smooth as before, but the midrange and bass really benefitted. Not having to strain as often let the notes they handed be better controlled, and the lower octaves were stronger and tighter from the sub.

This difference became clear when listening to tracks with multiple low-bass sounds are once. When you’d have a pair of instruments occupying the woofer and radiators on the Aon they could get a bit muddled and some smaller details could get lost in the mix. “Shadowboxer” from Fiona Apple’s Tidal showcased her vocals, which were clear and natural through the folded motion tweeters, but some of the accompanying instruments managed to get a bit lost. “Layla” off of Clapton’s MTV Unplugged album was clear and detailed in the guitar and vocals, but once again wasn’t quite as well defined as the very bottom.

The Aon2 performs very well without a subwoofer for a two-channel setup, but you can upgrade it later by pairing it with one and get a very noticeable improvement. But seriously, for $800 a pair, the performance of the Aon2 is exceptional in my listening tests, with or without a subwoofer. Compared to the $350/pair bookshelf speakers I had on hand, which were really well reviewed when available, the cheaper pair had a harsh, metallic treble and no bass response when compared to the Aon2. After a couple of tracks, I just stopped the comparison since there was really no point in continuing an unfair fight. The value that GoldenEar has packed into the Aon2 for the price is really remarkable.

The GoldenEar Technology Aon2 Bookshelf Speakers On The Bench

All measurements were taken from 1m away on 30″ tall stands in the center of the room. 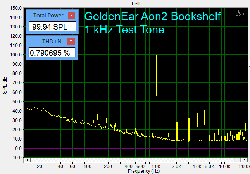 With a 10 kHz test tone that THD+N drops down to 0.53% at the same power level. The folded ribbon tweeter does well here, as many other conventional tweeters can’t manage distortion levels this low. 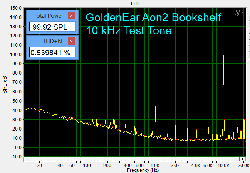 Moving down to the bass notes, the Aon2 puts out a lot of sound for a small bookshelf, but doing 100dB at 50Hz that THD+N rises up to 4.71%. That’s not bad given the size of the speaker, but if you want to push it to these kind of levels for the bass, adding a subwoofer would provide some better response. 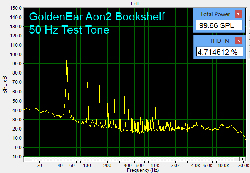 The Frequency Response for the Aon2 shows that it is pretty good down until around 38-40 Hz, where there is a steep drop-off. There is also a gentle roll-off near 20 kHz. There seems to be a bit of a rise in the bass area of the Aon2, but since I had to do these measurements in-room (Oregon is not conducive to outdoor measurements during the winter and spring), it could also be a room interaction. 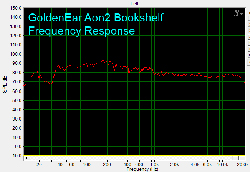 Overall on the bench, the tweeter on the Aon2 measures very well, and the bass response is quite good for a tiny, $800 a pair bookshelf speaker. 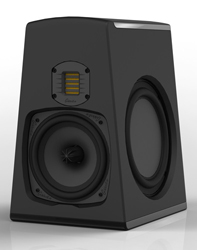 For a tiny, affordable speaker the GoldenEar Aon2 delivers a lot of performance. The bass response is much deeper than expected, but the real star is that folded ribbon tweeter that is clearer and more transparent than I even remembered from that first show. Part of me hoped for something that would add a little bit of softness to my overly-compressed, modern rock recordings to make them easier to listen to on CD, but the Aon2 instead brought out all the detail on albums for better or worse. Paired with great sounding source material they sounded great, but for those poorly recorded albums you may want a tube stage in your system, or to be used with turntable instead of a digital source.

The bass response is impressive, plunging down to 40 Hz in-room without issue, but it isn’t as tight and crisp as a tower speaker with a larger woofer would be with those notes. A standard sealed monitor might be a little tighter as those notes in the 60-100 Hz regions, but they also aren’t going to dip down nearly as low in the bottom octaves unless you’re spending an order of magnitude more than the Aon2 costs. Adding a 12″ subwoofer will pair really well with the Aon2 and remedy this issue, and let the Aon2 concentrate on the octaves above that where it does a wonderful job.

That said, anyone truly worried about the bass output of the Aon2 can move up to the larger Aon3, or one of the GoldenEar Triton towers to increase bass output and response while still keeping that wonderful folded ribbon tweeter in place. The Aon2 does a very nice job of striking a balance between cost, size, and output that I think anyone will be happy with. It leaves me wondering how their higher end Triton Towers would perform in my room, or what Sandy Gross could do with a budget of $5,000 or more per speaker. Highly recommended.