The DALI SPEKTOR 2 Bookshelf Loudspeaker is a fine example of an affordable loudspeaker that makes good music.

Its design goals were to allow for a variety of placements, from stand mounting to wall mounting to placement on a bookshelf, with a minimum of compromise. They are also adept as main speakers or surrounds in a five or seven-channel home theater system. This is a lot to ask from a $400 pair of loudspeakers, but the SPEKTOR 2s are up to the task. Let’s find out how and why together!

The cornerstone of the SPEKTOR line of speakers is the woofer’s wood fiber cone. In the case of the SPEKTOR 2, this woofer is 5.25 inches. It has the look and feel of a driver one would find in a more expensive monitor. DALI’s design goal is to have this woofer overlap with the one-inch soft dome tweeter with minimal loss to the crossover network. Wide dispersion and neutral sound quality are a trademark of the DALI speaker tradition, and the SPEKTOR 2 does a credible job at meeting lofty design goals in an inexpensive monitor.

DALI developed the SPEKTOR line of speakers to give the entry-level buyer an opportunity to own a speaker from a prestigious company with decades of experience in making high-end loudspeakers. The company could have ordered up some OEM-style speakers from any one of a few dozen suppliers, put the name DALI on it, and sold a bunch. Instead, DALI spent years designing the SPEKTOR speakers from the ground up to be worthy of the DALI name, and, as we will discover in this review, the company has given a gift to the entry-level buyer. 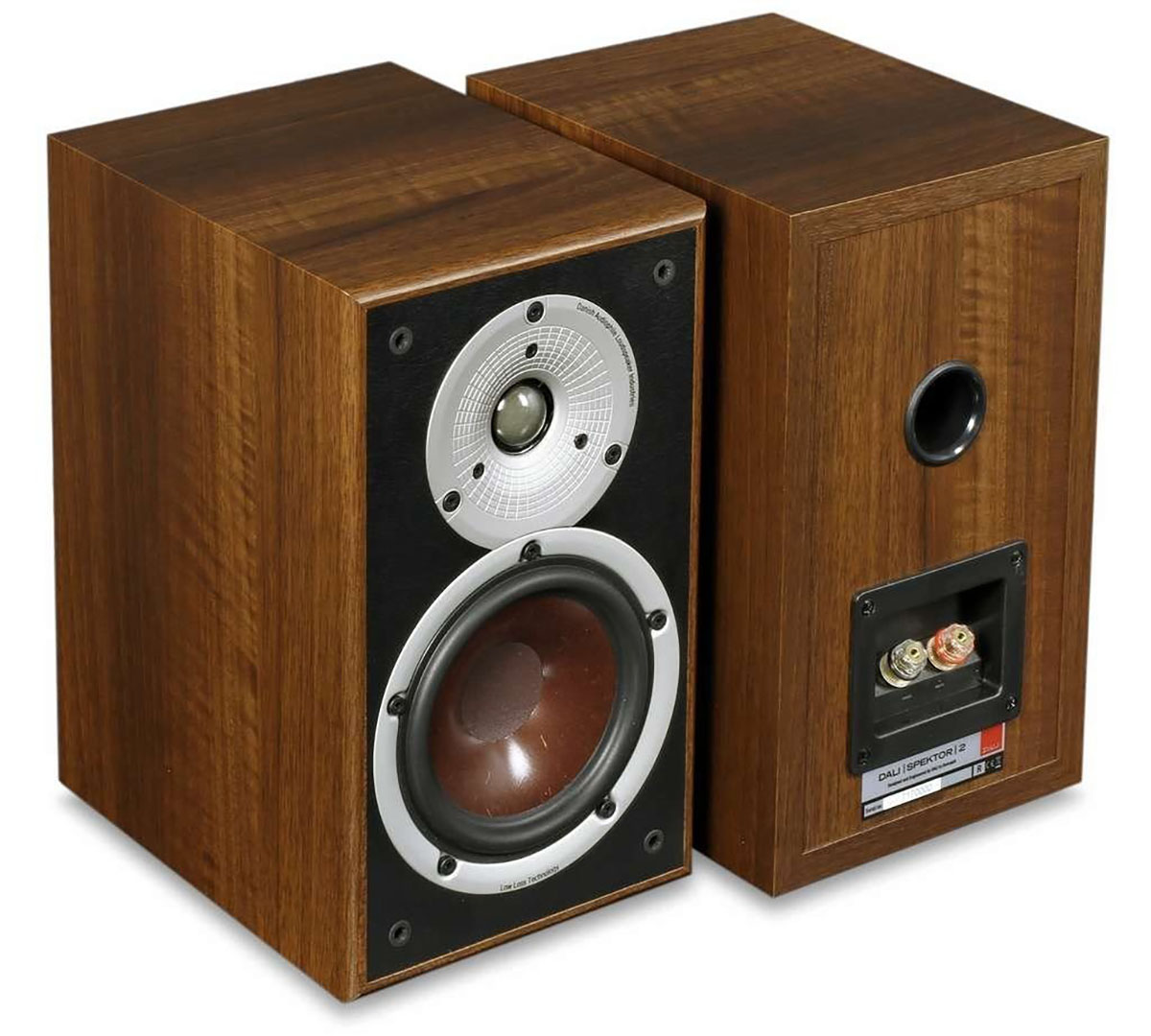 DALI has packed a lot of goodness into a 9.26-pound box. The 5.25-inch woofer is a fine paper, low mass driver, which allows for fast response. They then embedded wood fibers into the woofer to not only increase rigidity but to also make for an uneven surface to the cone. This reduces surface resonances, which also increases detail. This woofer alone is linear enough that it could have been a full-range driver. But DALI had other ideas and added a one-inch soft dome tweeter which utilizes an ultra-lightweight fabric, about half the weight of the industry standard. Both the woofer and tweeter are linear enough that the crossover is only needed to low pass to the woofer and high pass to the tweeter, without being used to smooth out the response curve. By applying science, measurements, and extensive listening, DALI has made a budget speaker that doesn’t sound like a budget speaker. The impedance, at 6 ohms, makes the SPEKTOR 2 the perfect load for budget amplifiers. 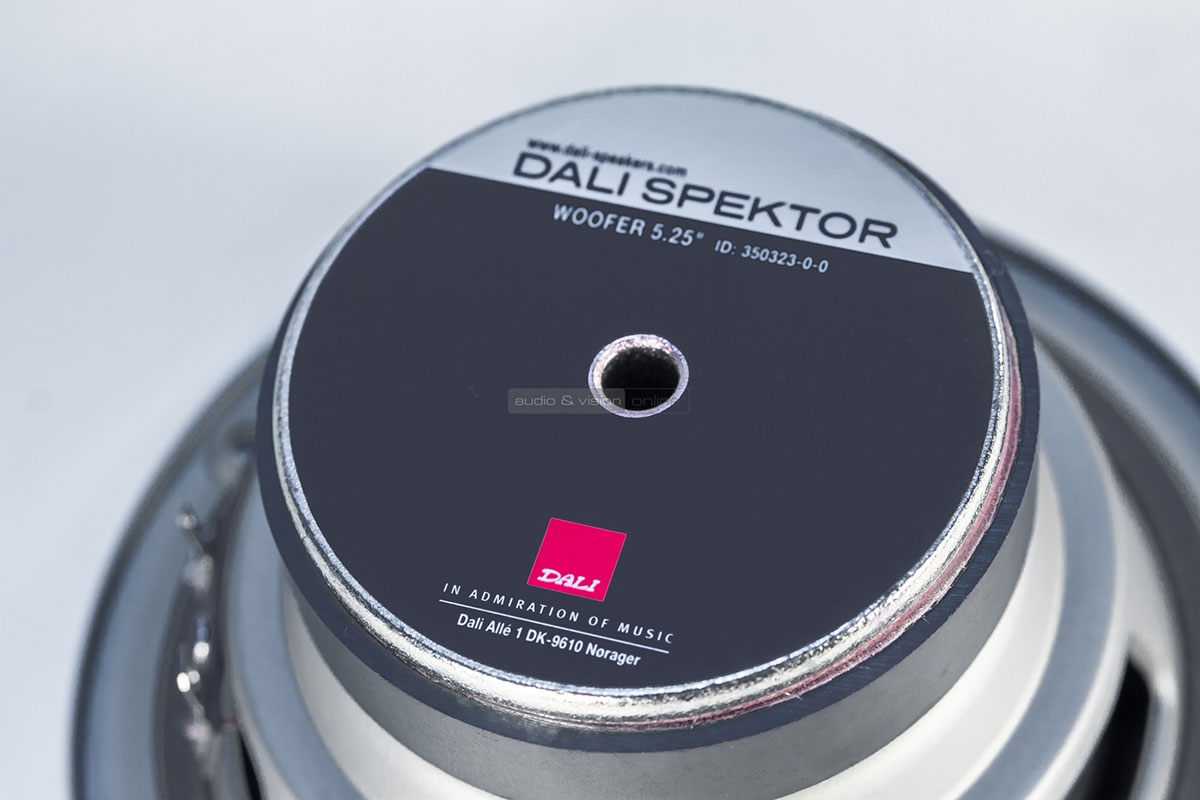 The speaker is well built, and even with heavy bass tracks at high levels, the SPEKTOR 2’s cabinet resonances are not noticeable. The vinyl grain walnut finish is more than passable, especially in a $400 speaker. Single inputs that accept spades, banana plugs, or bare wire are on the back of the speaker. Overall, the SPEKTOR 2s is an elegant music maker that will look good on stands, a shelf, or on the wall. 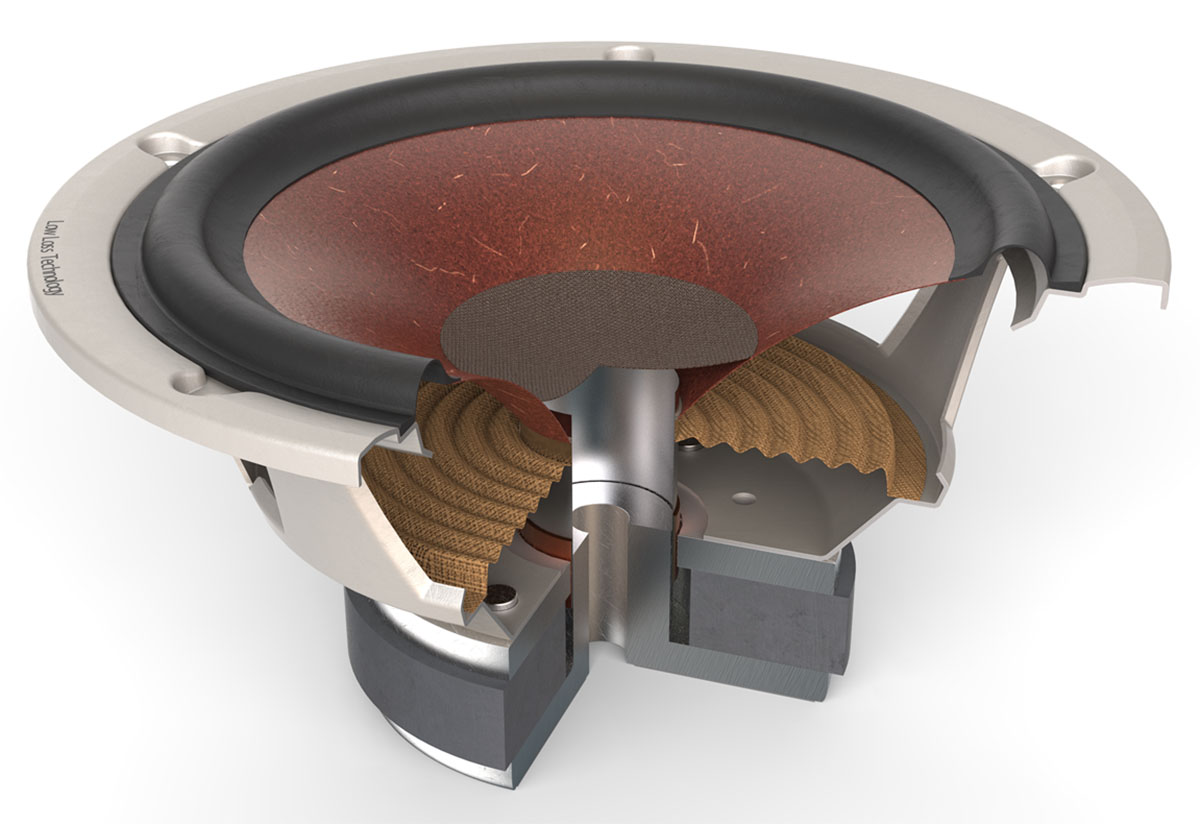 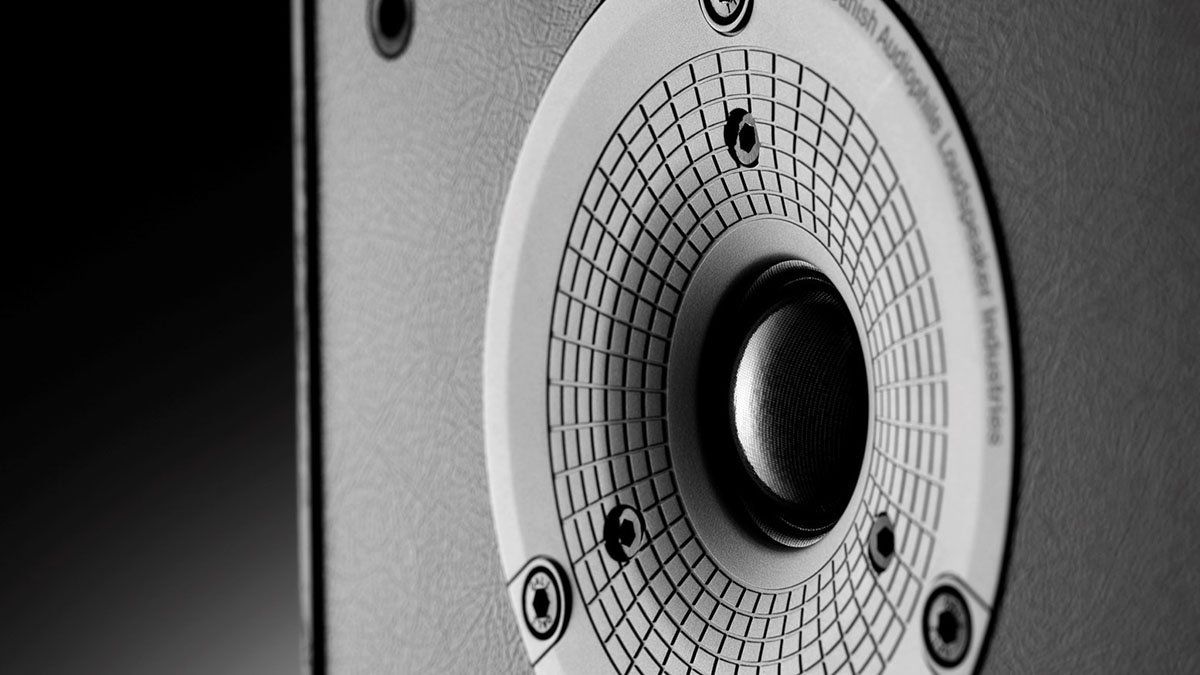 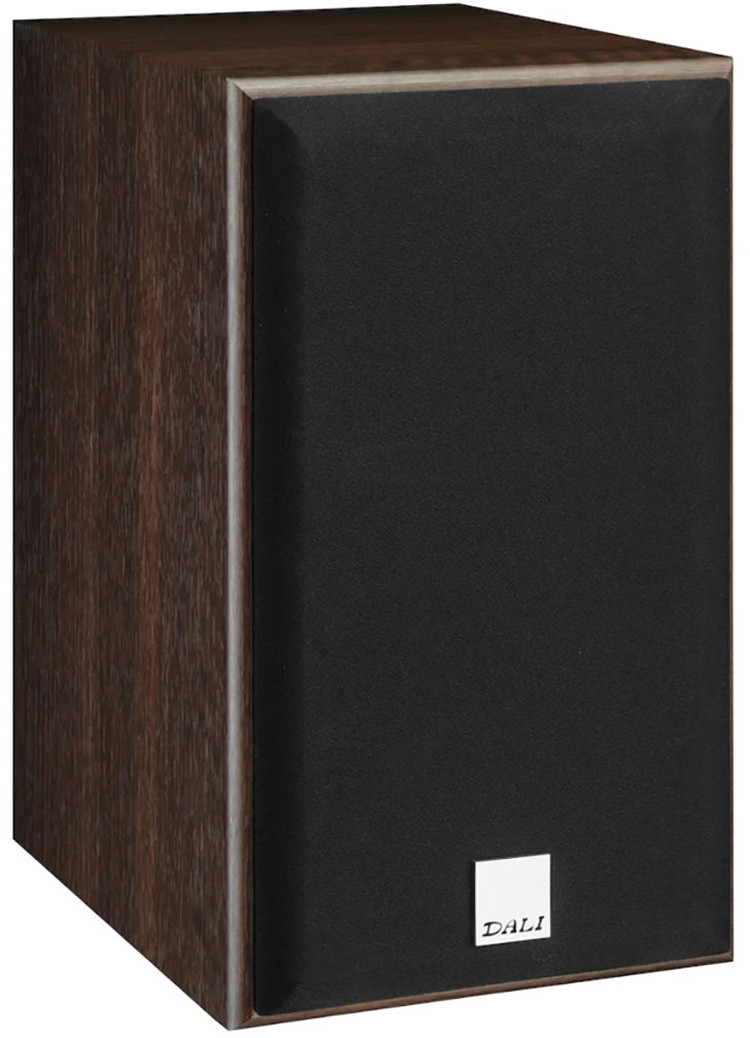 One of my favorite aspects of reviewing smaller speakers is the ease of placement. The SPEKTOR 2s are no exception to this. For critical listening, I used Sound Anchor stands, about 30 inches from the back wall and 24 inches from the side walls in our two-channel listening room. The speakers were not toed in, as recommended by DALI, as part of their wide dispersion design.

The DALI SPEKTOR 2s is a talented, versatile loudspeaker. They sound a lot larger than they look, and this is where all the fun begins. Turn out the lights, and fire up some vintage rock like Led Zeppelin or The Rolling Stones, and let a friend listen for a few tracks. Then turn on the lights and let your friend see that all this music is brought to life by these rather petite boxes. He or she will walk around to check to make sure it’s just the SPEKTOR 2 speakers playing. Then the smiles will start, and requests for more music will be made. You can also audition a difficult movie, and marvel as the DALI’s deliver crystal clear dialogue along with cinema spectaculars. 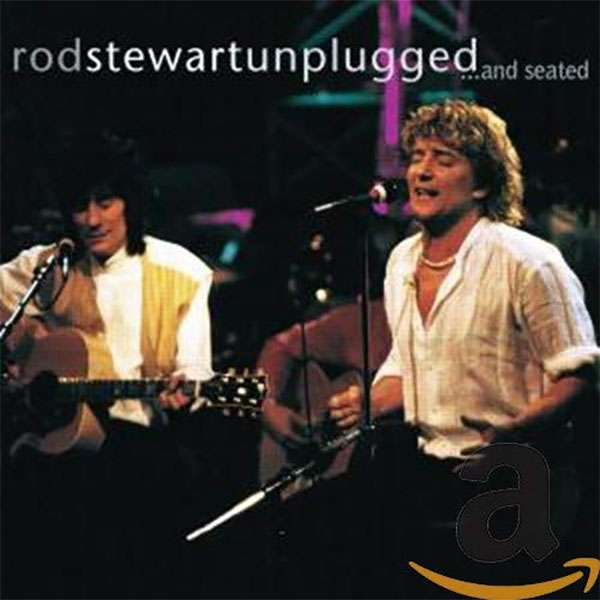 Unplugged and Seated makes for a wonderful way to test loudspeakers. Rod’s voice is so distinctive, and this collection is a mixture of some of his hits to go with lesser-known songs. In Tonight’s the Night, the SPEKTOR 2s got the chance to show off how well they handle vocals. The ladies backing up Mr. Stewart are clearly behind and to both sides of the star, and each voice is distinct. This is no small feat for a budget speaker. On Maggie May, Rod is singing as if each woman in the audience is Maggie. The reaction of the girls is picked up with clarity, especially when the band joins in.

The orchestra comes alive in People Get Ready, adding a palpable dose of emotion to an already epic song. The DALIs again played with a larger sound than one would expect in this size and price range. Let’s wrap up this disc with The First Cut is the Deepest. The drummer is featured, and the SPEKTOR 2s gave us a nice sense of weight, even with the kick drum. The sound stage is deep and wide, and within their SPL limits, these speakers stay neutral and stress-free. We are off to a tremendous start! 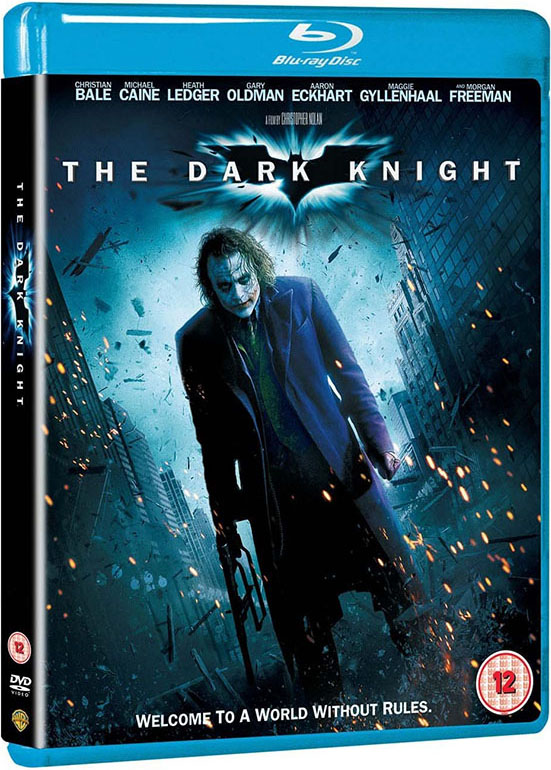 One reason a home theater delivers such good sound is that even modest systems divide the sonic performance into a total of six speakers: two mains, two surrounds, a center, and a subwoofer. For this review, I am watching The Dark Knight mixed down to a 2.0 system. It is the SPEKTOR 2’s responsibility to handle everything this Blu Ray disc has to offer: all five channels plus the subwoofer mix were sent to the single pair of SPEKTOR 2s. When Batman is speaking, he does so in a gravelly voice that is often difficult to understand with some speakers. The DALIs handled Batman with ease. They also do an admirable job with the percussive bass that is present throughout the entire movie. Of note is the motorcycle scene when the Caped Crusader fires grappling hooks around a semi, the DALIs gave me some of that “hit you in the chest” bass that is centered around 60Hz.

Gunfire is distortion-free, and Heath Ledger’s evil laugh brings out the dread that the producer intended. The experience of watching The Dark Knight in 2.0 brings to light that DALI offers a matching center channel and subwoofer in the SPEKTOR line, along with towers. One could easily start with the SPEKTOR 2s and expand into a full surround system at a later date. Your humble reviewer has no doubt that the SPEKTOR line of speakers opens up a wide variety of options, both now and in the future. 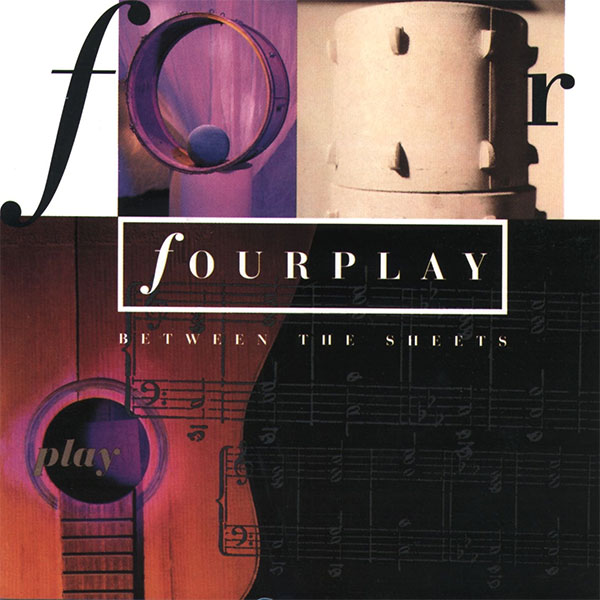 Fourplay has made a career out of making collections that are composed of exceptionally well-recorded contemporary jazz with a bit of modern pop into the mix. There are no rock anthems or soaring orchestral crescendos. What you get is listenable music that keeps the remote out of your hands. One just wants to enjoy track after track. Between the Sheets starts with a kick drum centered at about 50Hz, and as with other tracks, the SPEKTOR 2s managed to sound bigger than they are. The opening song is called “Chant,” and it sets the mood for over an hour of well-timed drums, bass, guitar, and piano. We were also treated to chimes and even a glockenspiel.

Throughout the disc, the bass was deep and full, the piano compelling in its accuracy and power, and the guitar work was believably brought to life. The occasional vocals on this disc are presented as more of a backdrop than a main event, and the SPEKTOR 2s did a wonderful job in keeping the instruments at the front of the stage, while the vocals were decidedly behind the players.

Once again, the SPEKTOR 2s made music and didn’t leave me wishing for the larger speakers. 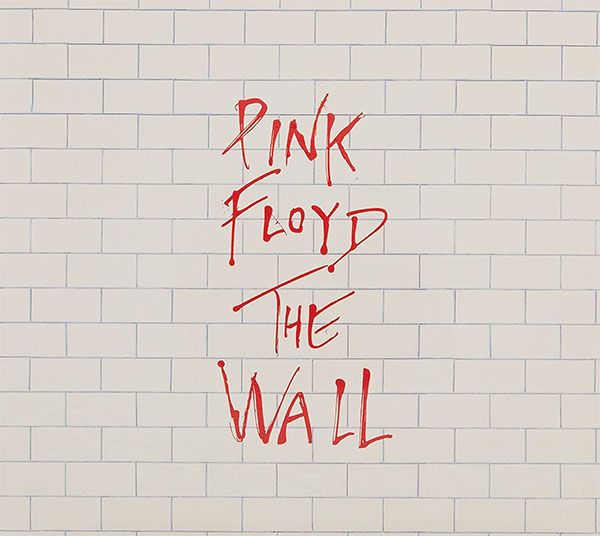 Our final music track for this review is the venerable disc from Pink Floyd. To mix this up a bit, we decided to add a subwoofer to the mix. DALI makes a subwoofer suited to this task, but one was not available for audition. After discussion with DALI’s team, a well-designed subwoofer that sells for $500, and that is comparable to the DALI’s own eight-inch unit, was added to the mix.

With the addition of this subwoofer, we are suddenly auditioning a $900 speaker system, but one that can be built over time. One can start with the SPEKTOR 2s and add the sub later.

The DALI’s were easy to integrate with the subwoofer, and the combination made for a full range system with bass down to 30Hz. The infamous chopper track from The Wall came through with an amount of authority brought a smile to my face. As an audiophile, I have always enjoyed this track played through large, expensive speakers. Here I was, getting that same enjoyment from a speaker pair for under $1000, complete with subwoofer.

The landscape portrait as presented by The Wall was brought into excellent focus by the SPEKTOR 2/subwoofer trio. The opening of ‘One of My Turns’ places the girl talking across an apartment and into a bathroom. The effect, when presented properly, is quite stunning. The SPEKTOR 2s teamed up with the sub to bring this picture to life. On the second disc, starting with ‘In the Flesh,’ The Wall builds into a crescendo of powerful bass, intense vocals, and feelings of dread at times. The SPEKTOR 2s and compact subwoofer nailed these 15 minutes of Rock Legend material with the proper weight and what felt like exceptional macro-dynamics.

You might be wondering, why spend more if these speakers are so good. The answer is simple: one can get better bass, more detail, and a deeper/wider sound stage with more expensive speakers. The DALIs are impressive because they bring you a large slice of that high-end sound for a bargain price.

DALI made a promise with the SPEKTOR line of speakers to bring real high-end sound to the masses. They have succeeded with the SPEKTOR 2 bookshelf speakers. For $400 per pair, they are nothing short of an astonishing value.

Thomas Marshall once said, “What this country needs is a good 5 cent cigar.” I am not sure if anyone ever asked if the world needs a good $400 per pair loudspeaker, but DALI answered this question with a resounding YES. Our senior editor at Secrets, Carlo Lo Raso, has visited our home on many occasions. On his last visit, we listened to many of the loudspeakers we have here in the $5000 to $9000 price range. We then listened to the SPEKTOR 2s together. We both thought then that DALI had delivered something special to the audiophile on a budget. The two months since then have done nothing but reinforce my admiration for this elegant loudspeaker. If you (or a friend) are looking for an affordable speaker around which you can build a music or home theater system, DALI has delivered your wish.