ARE Audio consists of two East Coast Canadian childhood friends who have created interesting speakers with a twist. They currently produce two models, the bookshelf Light Roasts and a floor stander called the Grinder. These guys do more than just build speakers; they also customize the speakers to your taste. Not only can you get virtually any color, you can also chose your connector style and if you have a thing for exotic drivers, you can even change those too. In fact they are open to your suggestions. With this review pair, it is obvious that they pay great attention to details by using beautifully finished cabinets with well utilized components.

The Light Roasts in standard configuration are rectangular ported ¾” MDF box with radius edges. My review sample features upgraded front and rear baffles, which are Hardwood rather than MDF and finished in clear satin. The sides, top and bottom, are ¾” MDF finished in a textured black automotive paint. This was chosen because it resists damage and creates an anisotropic surface (improves hardness). The 3″ port exits from the top of the speaker, seems strange, yet has sound principals. The port is almost 9.5 inches long and if ported to the rear would need an elbow (not the end of the world mind you). Rear porting also decreases the available mounting locations as you cannot place the speaker too close to the back wall. Another bonus is that it deters your wife from using the speaker as a plant stand. 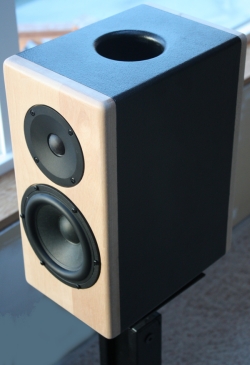 The drivers used are a 5 1/2 inch midrange from Silver Flute and a Peerless tweeter. The midrange is a wool cone with decent low frequency extension. This is put to good use as this speaker is tuned to 60Hz, which suits this driver well. The crossover is a simple point-point first order using Solen inductors and Benic Polyester capacitors.

The Light Roasts were installed in my office setup, mounted on my computer desk three feet apart, with the desk protruding 1 foot in front of them. Here they were used without a subwoofer, and listening was done in the semi near-field. They were powered by a Marantz PM8003 integrated amplifier, which was fed an analog signal from my Onix XCD-88 redbook player. 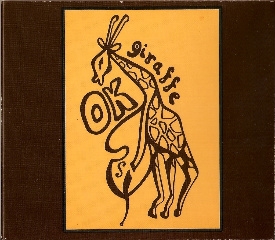 To get me in the mood I started with the debut album by a funky energetic trio from Canada called Okgiraffe. Their sound can be described as artistically funky, world-type music and encompasses a wide range of styles. The band consists of Rosa Smedley on vocals, upright bass and guitar, Kevin Bertram on vocals and upright bass, and Brandon Goodwin on percussion and trumpets. The vocal pairing of these singers intertwined with guitar, upright-bass and percussive instruments give the auditory illusion of a much bigger band. Instruments and vocal pairings such as those featured on this superb album create a difficult test for dynamics. As this album was recorded analog live-off-the-floor, it is also a great test for a systems ability to recreate depth and soundstage.

On the opening track “Black Blood Famine” the stand up bass is what I am listening for. The pluck and release of the strings should be clear and detailed without being lost behind the vocals and the Light Roasts do a wonderful job. The music comes through with just enough clarity to sharply define the notes without adding un-natural grain. The final track, “Jackson Said”, features Rosa Smedley’s lead vocals up front and center. The Light Roasts did a superb job of presenting a spacious and deep soundstage. When the song slows its tempo and the upright bass comes out as well as an array of percussion I am listening for the separation of instruments, which was clearly evident with the Light Roasts. Over all, the sound was precise, clean and very inviting. There was a small amount of hiss present when the volume was cranked, although this is more a limitation of the recording itself and not the playback chain. 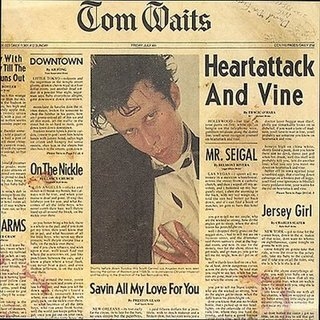 One of Tom Waits best sounding recording is “Heart Attack and Vine”. This album has something for everybody. From the gravelly sideshow Tom to the swoony soundtrack Tom, this album has a wide range of musical styles. There is plenty of dynamic tracks and as always a wide variety of instruments.

For our purposes the second track, “In Shades”, is a standout. This is an instrumental, bluesy number which sounds as if it’s recorded live in a bar. There is wonderful interplay between the instruments with an underlying chatter of patrons. The Light Roasts handled this well with only a slight edge to the audience clapping. “Til the Money Runs Out” has a strong bass line that comes through with punch and clarity. Tom’s smoked out voice has the weight and definition needed to pull the song together. The only real deficiency I can hear is when pushed harder, at high volumes, the high-end becomes a little ragged and slightly fatiguing, though the midrange is clean and there is more than enough bass for this style of music. 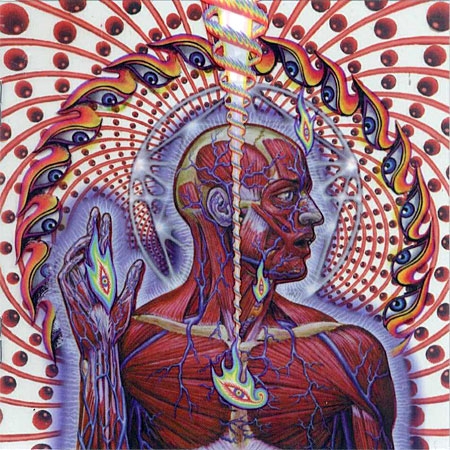 Tool’s 2001 release “Lateralus” on HDCD is a fine example of progressive rock recorded right. There is an intense amount of energy which can easily be lost in the compression so often used today. The HDCD format benefits their music as it allows the complex percussion, bass lines, soft vocals and otherwise hidden detail to be heard through the feedback and distortion.

“Ticks and Leaches” has softer parts within the track that contain vocals pushed into the background beneath heavy bass lines and percussion. The layers here are nicely conveyed, even at loud volumes. When the track kicks up the pace and intensity, the transition can cause lesser speakers to compress the initial attack. When done wrong this is audible and annoying. Only a minor hint of compression was audible at this point in the album. Another interesting track is “Disposition”. This song begins with a fair amount of electric guitar reverb leading into the percussion by Danny Carey. Here it gets tricky, Danny Carey uses a massive drum kit and with the Light Roasts I was able to hear the distinct position of the various drums, from left to right, and even some hinting of front to back. One could almost picture the large curved drum kit he bangs on with fervor. As was noted with the Tom Waits album the only issue with this album was that the high end was a tad fatiguing at times, which can happen with highly detailed speakers.

A simple, yet stunning compact bookshelf speaker that sounds larger than it looks. There was enough bass when mounted on my desk that I needed no subwoofer for music playback. These speakers deliver clean and clear sound, and are on the forward side of the fence. They sound their best when mated with a warmer amplifier. I found them out of there element in a large room that required moving away from boundaries as they benefit in the bass department from some reinforcement. When mounted near field on my desk without a subwoofer, the bass was more than adequate. Not my first choice for high-spl rock and metal, as they do not cover up recording flaws at all and can get fatiguing with ugly albums, they were delightfully revealing with more refined music.