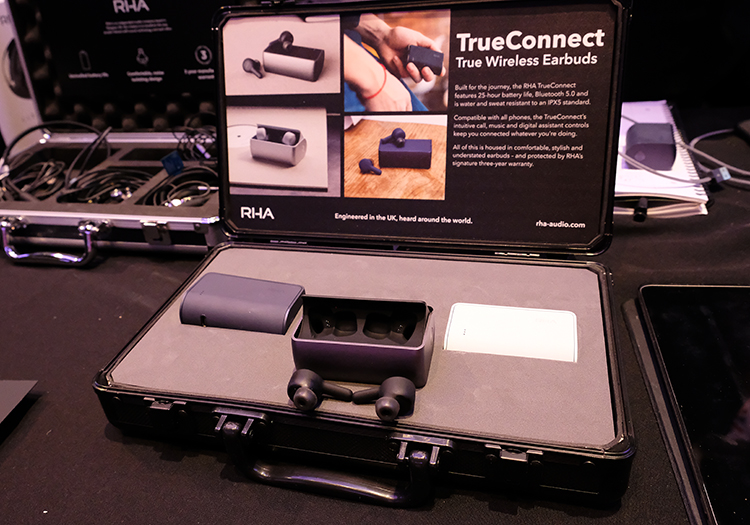 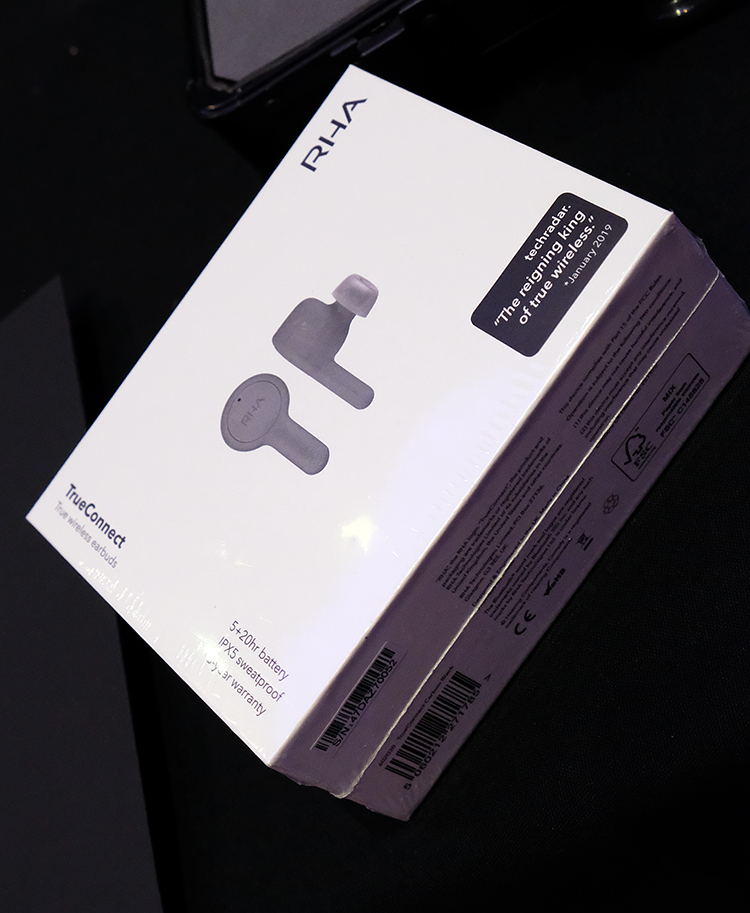 I first laid eyes on the RHA TrueConnects at CanJam NYC after having a pleasant conversation with the company representatives, who were present at the booth. I have always been a slave to the wire when it comes to earbuds – I never bothered venturing into wireless earbuds because I disliked the “collar-wire” that often connected them as well. True wireless was intriguing when it first started to become common, but again, I was more used to the wire. I found it simpler to stick to earbuds I already had around. The TrueConnects, however, caught my eye very quickly. They looked like the AirPods that I had seen so often in the ear canals of my peers at school (whether it was during class or after), but the design appealed to me far more. After a further conversation with the owners of RHA, I presented the idea of a review to them. The TrueConnects seemed like a fitting introduction to true wireless, and they motivated me enough to make the jump. 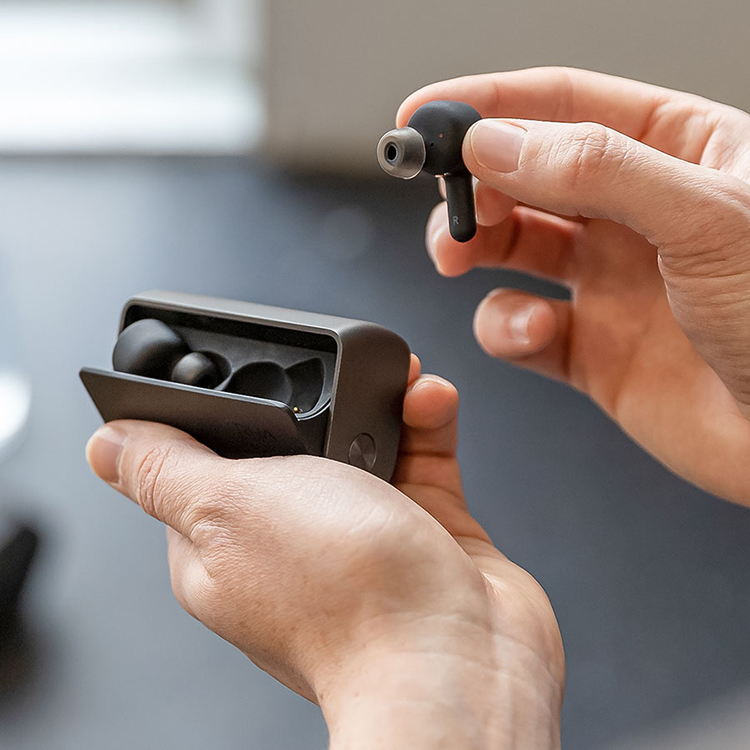 The TrueConnects opted for a minimalist look that exudes sleek modernism. The pair I used were the “Carbon Black” color option, which added to the already clean design. The black suits them. The travel case for the earbuds alone, in all honesty, was enough to sell me on the TrueConnects. When I first got my hands on a pair at CanJam, I was immediately treated to a satisfying, crisp opening mechanism. The container for the in-ears swivels out from behind a metal covering with a fulfilling click. It’s a sensation that’s hard to put into writing, but suffice to say that as I lean back from my keyboard to form the next sentence in this review, I pick up the case and start opening and closing it like I’m an elementary schooler clicking a ballpoint pen in class. 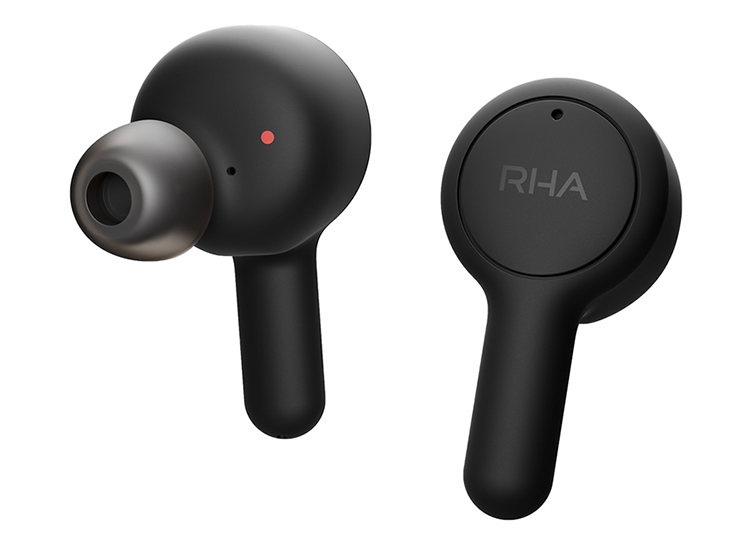 The units themselves have a design that’s slightly reminiscent of their Apple-made cousins, but different in key ways that suggest someone married into the family. The body of the RHAs is more drum-like, with the tip protruding out from the inner face of this cylinder and a button resting on the opposite face. As with most wireless earbuds, the buttons perform different tasks depending on the click pattern. A single click pauses, two clicks skip, et cetera. The main aspect of the design that tangentially connects them to the AirPods is the stem they share. The reason the RHAs are a cut above their milky white competitors in my eyes is their use of tips. I’ve always disliked the design of Apple’s earbuds because the plastic feels like it’s tearing up the inside of my ears (I’m aware that Apple released AirPod Pros that have tips, but that’s an extra $100. No thank you). I will always prefer having tips on my earbuds, and it’s a bonus that the RHAs include rather nice foam ones.

All this considered, though, I won’t do RHA the injustice of lumping them with the mountain of fruit pulp that Steve Jobs left behind and say that they derived their design from the AirPods, or even say they improved upon it. The design of the TrueConnects is unique in key ways that separate it from the turtlenecks and cream-colored overpriced phones, and in my opinion, is a perfect example of a smaller company besting a gigantic one in product quality. 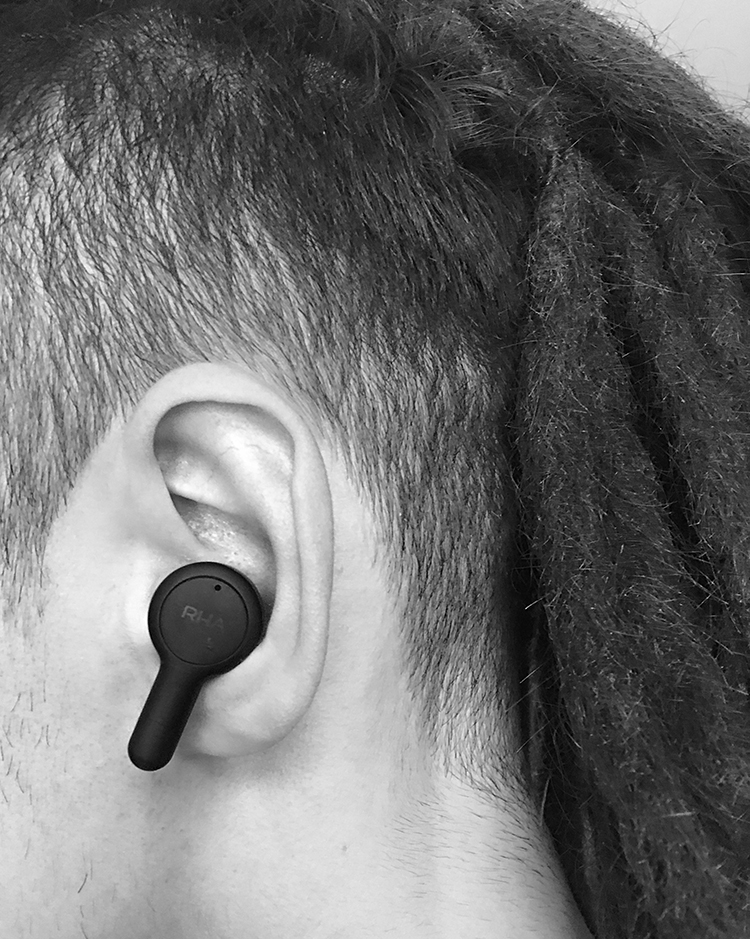 I largely used the TrueConnects with my Samsung S10, sourcing music from Spotify until testing with FLAC files. I found that the TrueConnnects were very comfortable with the included foam tips, and had no issue wearing them for extended periods. During testing, the earbuds only died on me once, and it was after around five hours of use – matching the advertised figure. In turn, the case does an excellent job of recharging the earbuds quickly, and also has impressive longevity. I found that more often than not, it wasn’t necessary to charge the case nightly.

In terms of performance, I was impressed with the TrueConnects. They produced a nice, full sound that was well balanced across the board.

They don’t sound hollowed out or tinny, and they boasted a strong low end that took me by surprise. They also did a fairly good job of canceling outside noise, which I found very useful during extended bouts of school work. My only complaint with the TrueConnects is concerning the Bluetooth pairing. My phone usually only connected with the right earbud at first, and I would have to replace and take out the left one to get it to connect. From there, there’s a hiccup in synchronization, albeit a small one. After that minor lapse, the TrueConnects carry on without issue and perform consistently well. While it was annoying at times, I suppose that is one drawback of the true wireless model at large, as I did notice this with some other products I tried at CanJam. I would have to sit down with other wireless earbuds to know whether this is a chronic flaw with true wireless at the moment or if this is something more specific to the TrueConnects, but ultimately I don’t blame them for having to tie their shoes before they go on a run. 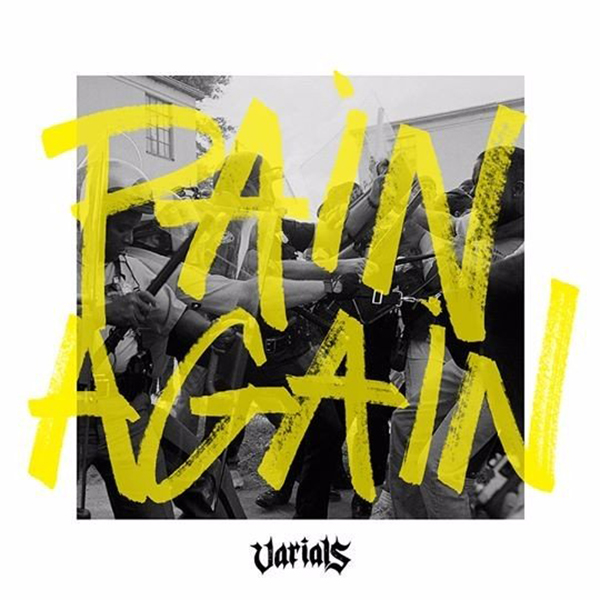 I picked this album specifically as a workout for the TrueConnect’s low end. The low, chunky guitar/bass tone was portrayed perfectly by the earbuds, and recently departed vocalist Travis Tabron’s ferocious vocals shone through as a fantastic counterpoint. By the time I reached “Colder Brother” I was immersed enough that I was cartoonishly miming the closed hi-hat that characterizes that particular song.

I found the RHA TrueConnect’s portrayal of Varials to be faithful to their sound, and I was sufficiently impressed. 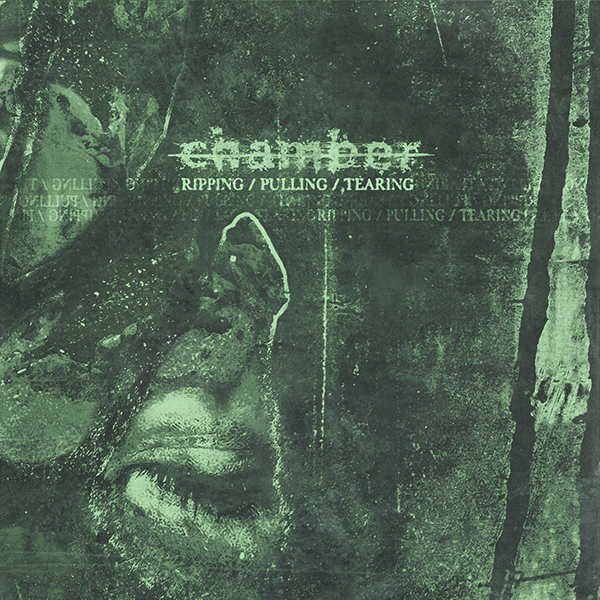 Nashville, Tennessee’s Chamber is a fairly recent arrival in hardcore metal, but one that caught my ear on the first listen. Their technical and often convoluted music, in conjunction with the TrueConnect’s strong performance, once again encouraged me to bang my head like a fool in my chair. I was particularly impressed with the many guitar squeals and high notes that are spaced throughout Ripping / Pulling / Tearing.

It was here that the TrueConnects got some room to play with the high end. Once more, they continued to excel in sound quality, blowing away my somewhat negative preconceived notions about true wireless earbuds. 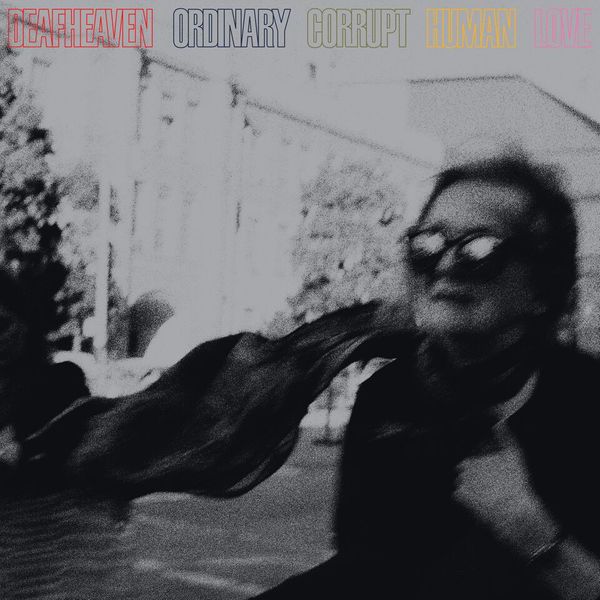 I have this particular album in FLAC format on my phone, and it was picked for this reason. This is also an album that I am fairly familiar with, so I would be able to label any anomalies fairly easily. However, there were none to name. In all honesty, I drifted off to sleep during one of the more relaxing parts of this album. In my eyes, this is exceptional proof of the TrueConnects’ prowess (not to mention, they are far more comfortable to wear in bed than wired earbuds). 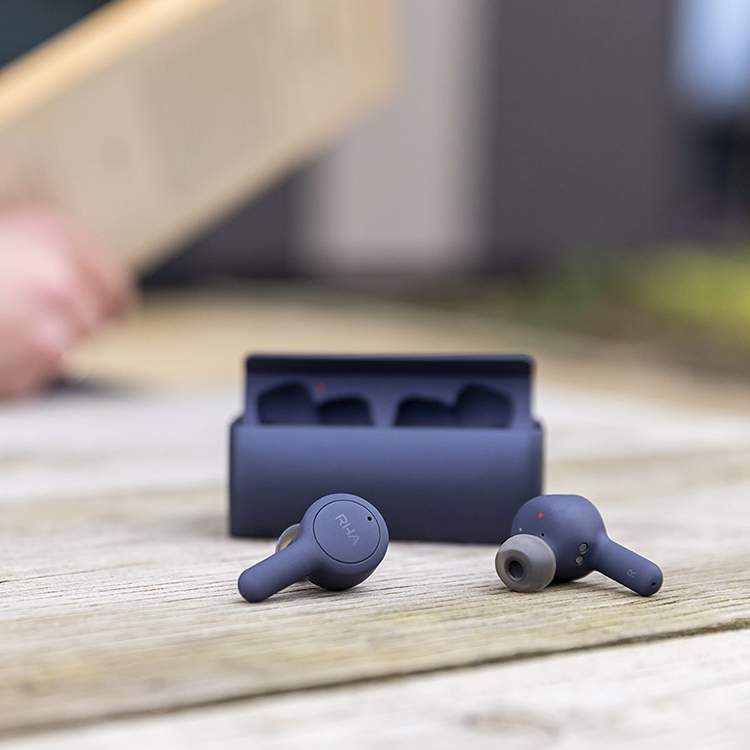 The RHA TRUECONNECTS were able to convert a true wireless skeptic by delivering high performance with style and quality. Very Highly Recommended.

All in all, the RHA TrueConnects impressed me across the board, and I may find it hard to revert back to wired earbuds again. The sound quality for under $150.00 is truly outstanding and, having never truly experienced the sensation of wire-free listening, I was somewhat overjoyed with the versatility that these allowed. Comfort was never an issue while wearing them, whether I was sleeping, working or doing anything in between. On top of that, the design of the TrueConnects is fantastic. I’m still sitting here clicking the case. In terms of my limited experience with true wireless earbuds (which encompasses these earbuds and a brush with an AirPod in one ear), this is the product to beat.