Headphones, including earbuds, on-ear headphones, and over-the-ear headphones have exploded in the marketplace during the last few years. It seems that if your company doesn’t have some form of headphone in your product portfolio, you just aren’t up-to-date with what’s happening. 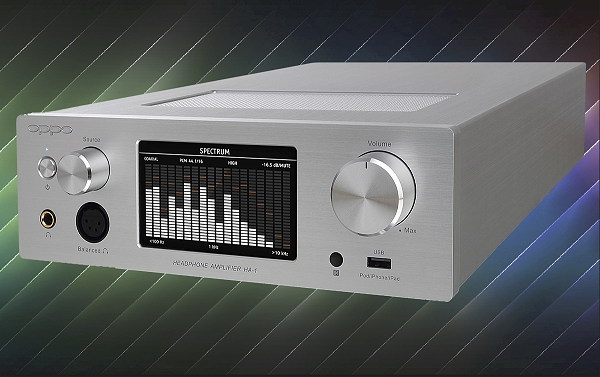 OPPO released their first headphones, the PM-1 (over-the-ear), and have followed that with the HA-1 Headphone Amplifier, just now becoming available ($1,199). The headphone output stage (as opposed to the preamplifier stage) is biased into Pure Class A, which is unusual, especially at the price. I found the sound to reflect this, with crystal clear details. With headphones, sometimes one can hear a hiss, which is the noise floor. I could only detect absolute silence, when music was not playing (in between music tracks) with the HA-1. Using the PM-1 headphones, I only had to turn the volume up to about 9 o’clock on the dial (- 18 dB in a range of – 80 db to + 6 dB), and that was with the output set to “Normal” rather than “High” (for headphones that need more power).

There are new ultra-high resolution digital music formats that are emerging, namely, 24/352.8 PCM and DSD128. Music in these formats is just becoming available, and I downloaded some samples from 2L, a music company in Norway. You play these files from your computer, through the USB DAC connection on the HA-1. I’m not really sure I could detect a difference between those formats and 24/192 or DSD64 (the current SACD or “DSD” format) which have been available for some time. Nevertheless, they sounded fantastic, played on the HA-1 and PM-1. It even supports DSD256 digital audio, which is not yet available to the consumer! OPPO is planning for things that are still around the corner and not visible.

Other connections on the HA-1 include a digital coax (RCA) input, digital XLR input, digital mobile input (a USB port on the front panel to play music from your iPod, iPad, or iPhone), Bluetooth, RCA unbalanced analog output, and XLR balanced analog output. Of course, the main outputs are on the front, including a ¼” non-balanced output, and a 4-pin balanced output, which I used with the PM-1 balanced headphones.

Here is a video that describes the main features of the HA-1:

And, wow! What a sound. Built like a tank, and gets as hot as a tank in the Sahara due to its Class A output. If you have purchased the PM-1’s, the HA-1 is a no-brainer. Get one now! If you have other headphones, get one as well.

Recenty, we reviewed the OPPO PM-1 balanced headphones, and were in awe of the sound. As I neared the end of writing the review, the new OPPO HA-1 headphone amplifier arrived.

When I opened the box, I was in for a real surprise. Great design. Myriad features. Luscious sound.

The Design of the OPPO HA-1 Headphone Amplifier

I never expected to place on my end table, a headphone amplifier whose output stage is biased into Pure Class A operation, using fully balanced discrete circuitry with no global negative feedback, and priced in the kilobuck range.

The front panel has an input and screen mode selector, an LCD display, volume control, balanced and unbalanced headphone jacks, on/off button, and a USB jack for iPods, iPads, and iPhones.

The rear panel has RCA and XLR analog inputs, RCA and XLR analog preamplifier outputs, and digital coaxial, XLR, Toslink optical, and USB DAC (computer) inputs, plus a Bluetooth antenna (for use with an app that works with your iPod, iPad, or iPhone).

The inside of the chassis is shown below. You can see there is no room to spare. A nice sized transformer and plenty of capacitance (this helps with the deep bass). 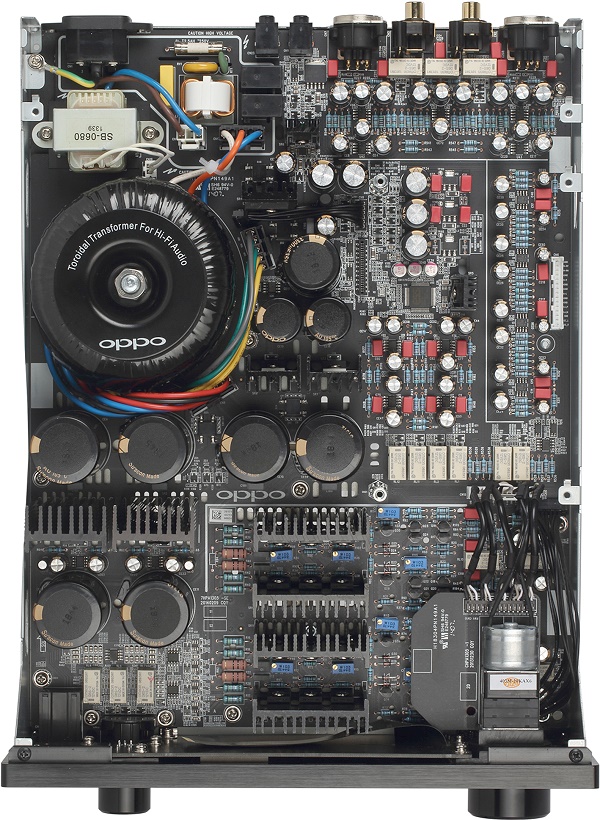 The grille (vent) on the top of the HA-1 gets very hot during use, due to the Class A bias. Don’t set anything on the HA-1 that would cover this grille. 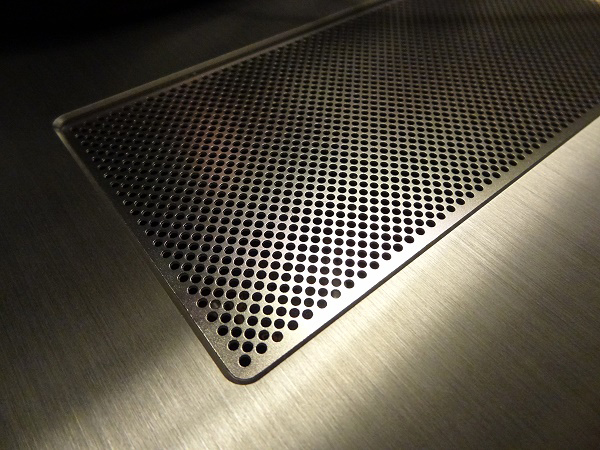 The IR remote control is small, and fits comfortably in the hand. It is very thin and elegant. 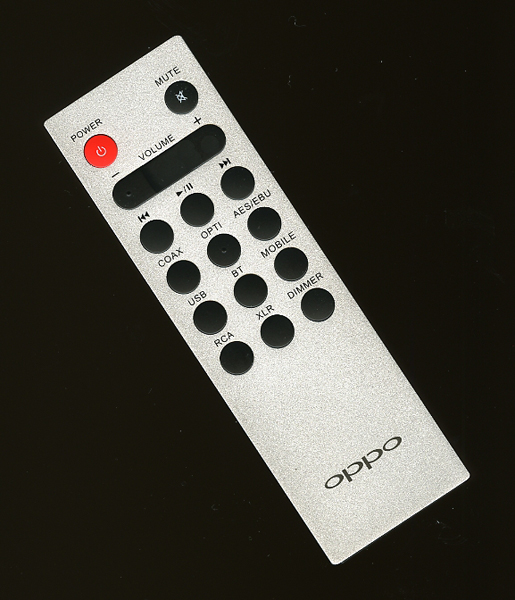 The OPPO HA-1 Headphone Amplifier In Use

My setup is shown below, with the HA-1 on an end table next to my easy chair. The PM-1’s are sitting on top of the HA-1 (do not cover the grille at the front, as the heat generated by the Class A operation exits there). My iPod is next to the HA-1 and connected through the front USB port (asynchronous), labeled “Mobile” on the input menu. 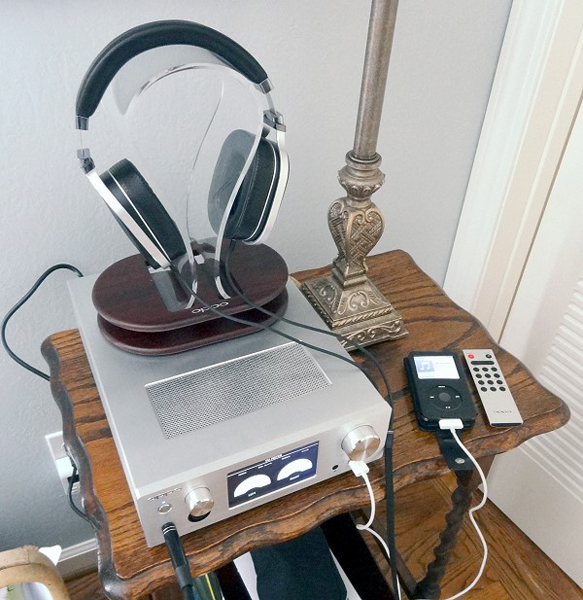 Here are the menus selectable by the knob on the left of the HA-1. 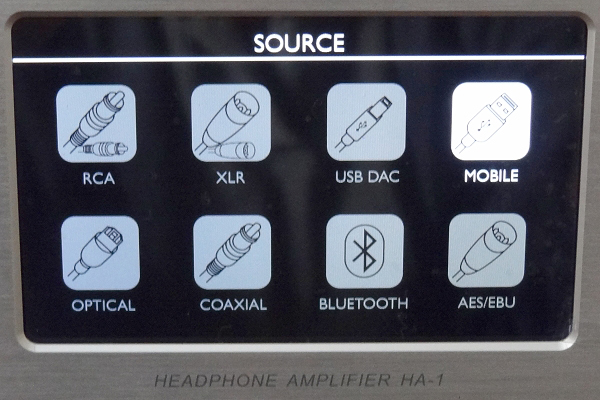 There are three additional screens to choose from. The first one, shown below, indicates the status, i.e., Source, Audio Format, Gain Level, and Volume. 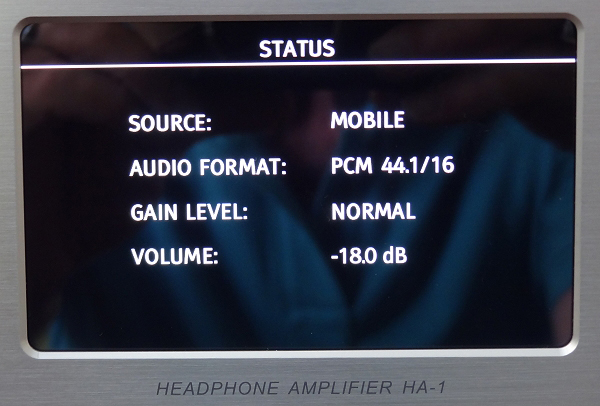 You can also choose Spectrum, which shows the music playing at various frequencies. 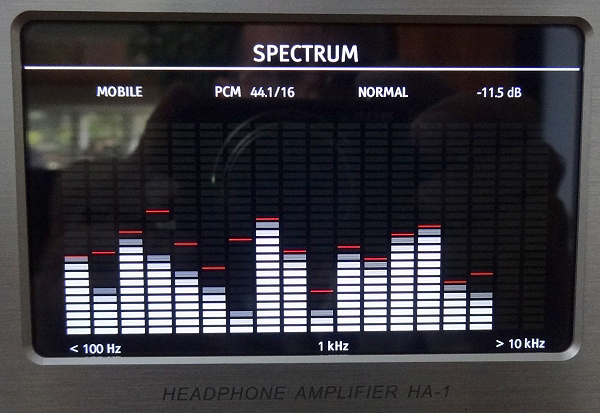 The screen I like is this one, the VU meters. It shows the digitally recorded level of each channel. Rarely does it get close to 0 dB, which is the digital clipping level. Most of the time it stays around – 10 dB to -5 dB. 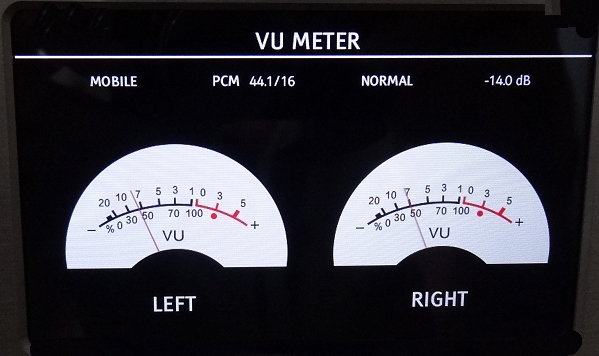 I played music, mostly classical, from my iPod and also from my computer, where I stored the downloaded DSD128 music files. All of it just sounded terrific! The highs were clean, and the bass was deep. No excessive sibilance or congestion in the midrange.

I think it’s fortunate, at least to me, that I did not hear any difference between 24/192 and 24/352.8, because if there were a significant difference, it would mean I have to upgrade all my audio equipment that uses DACs (and that’s a lot). For some of you though, I am sure you will jump in line to purchase 24/352.8 albums and get a DAC that will decode them. May the force be with you.

Note that the high resolution digital files that were downloaded from 2L are all based on DXD (Digital eXtreme Definition) masters. This format is 24/352.8 PCM. All of the music formats offered in their albums originate from the DXD masters, so even the DSD (Direct Stream Digital) albums originated in PCM. The reason for this is that the 1 bit nature of DSD renders it unsuitable for editing, so it has to be in PCM format in order to be editable. The only true DSD recordings are those that are recorded in DSD, not transcoded to PCM for editing (meaning basically that they are not edited), and released as DSD. I would like to see all DSD albums state whether they have been recorded in native DSD, and whether they have gone through a PCM transcoding for editing, or if they have always remained in the native DSD format.

The OPPO HA-1 Headphone Amplifier On the Bench

I tested the headphone amplifier using its coaxial digital input, since this has been the standard digital connection in the past. The results should be similar to the other digital inputs, except that the USB DAC input (for music played through your computer) has the ability to decode higher sampling rates.

All distortion measurements are within an 80 kHz bandwidth. I set the volume control to 0 dB. The output was loaded with 47 ohm ceramic resistors. The 4-pin balanced headphone jack was connected to the Audio Precision for the measurements.

At 16/44.1 sampling, and the 1 kHz signal at 0 dB, there was 0.02% THD+N. This is higher than the spec sheet, but that’s the way it usually is. The important thing is the array of peaks. The odd-ordered peaks, through the seventh, are higher than the even-ordered through the sixth. However, distortion peaks overall, are small (I didn’t hear any harshness or congestion at all, even at the loudest volume I could stand). 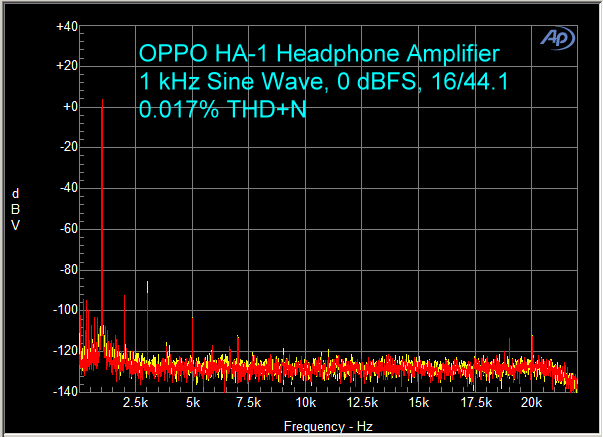 The corresponding graph at 24/192 sampling showed a lower measured distortion, and only a second and third harmonic. 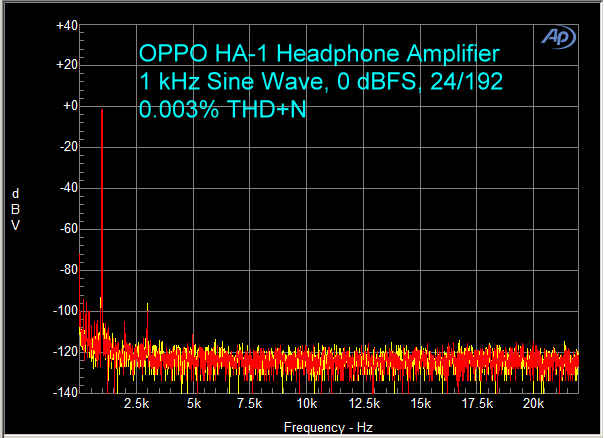 The rest of the distortion measurements, shown below, used test signals at – 5 dB.

At 1 kHz, and 16/44.1 sampling, THD+N was 0.017% as it was at 0 dB. This means the noise component is the dominate portion of the number. Notice however, that the number of harmonic peaks has decreased, compared to the test signal at 0 dB. 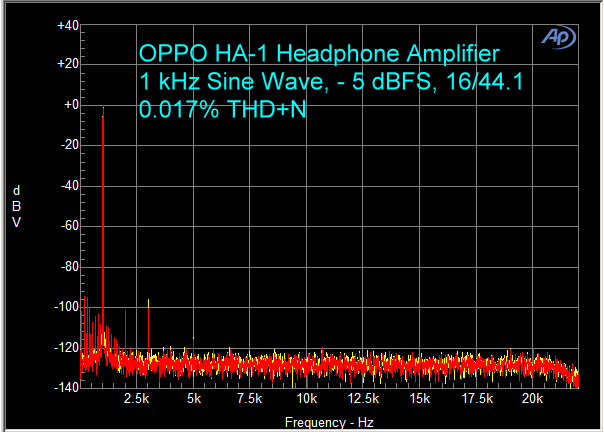 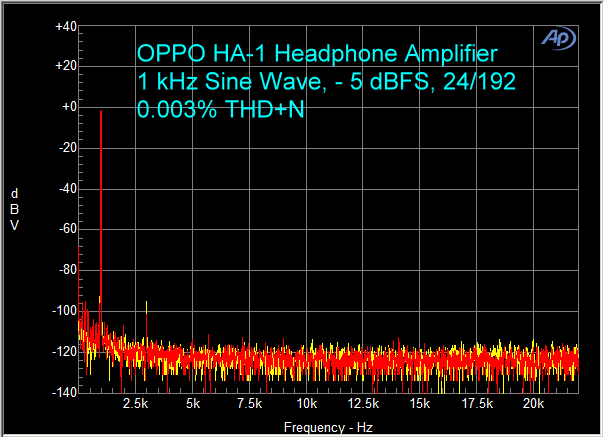 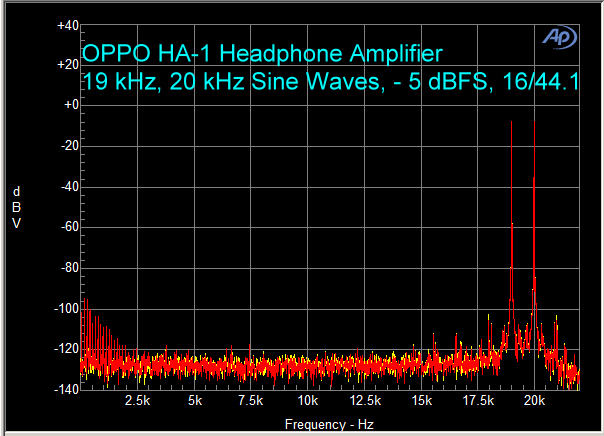 Correspondingly, at 24/192, there was only one peak on either side of the test tones. This is audiophile grade performance. 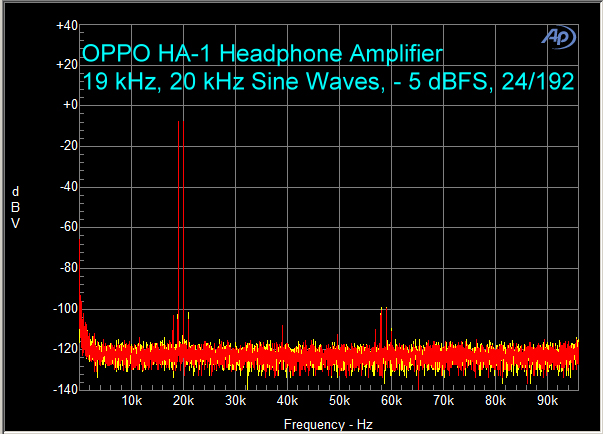 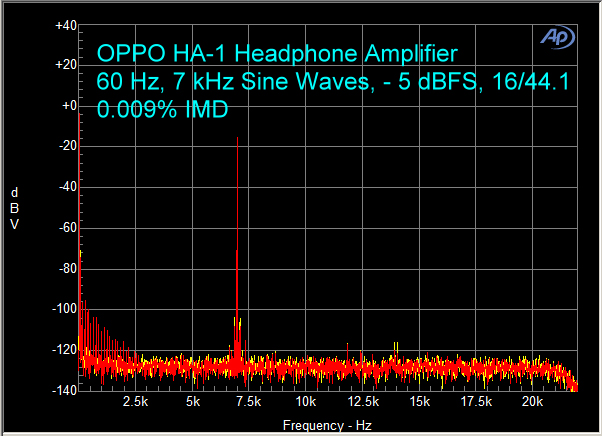 The peaks for the 24/192 IMD test were non-existent, as shown below, and in the second graph which has a 0 – 20 kHz scale. These results are more like the output of a player or preamplifier rather than what is actually a speaker power amplifier. 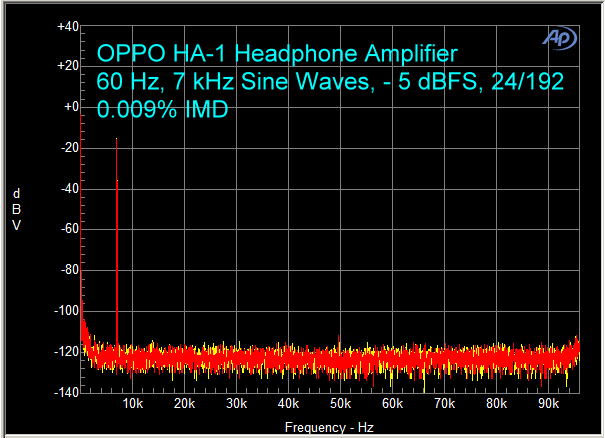 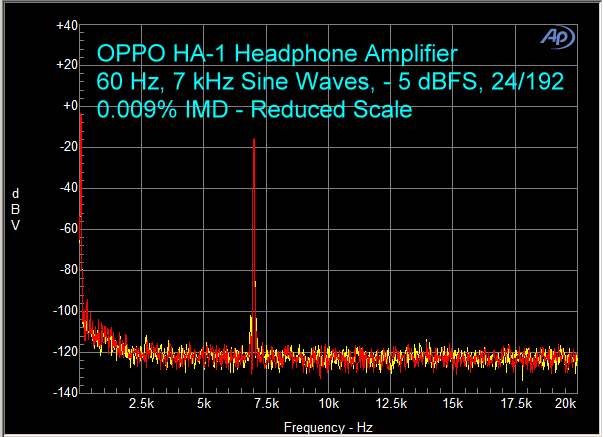 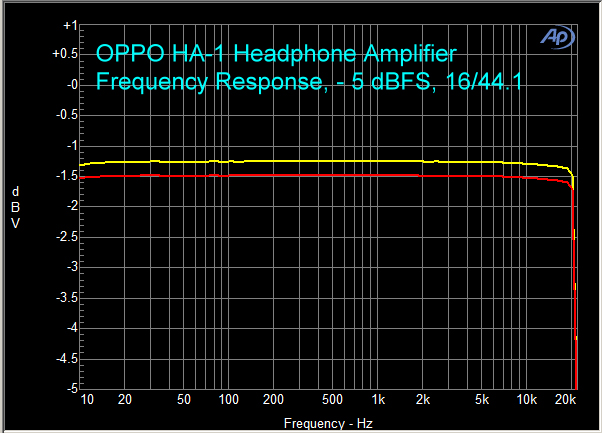 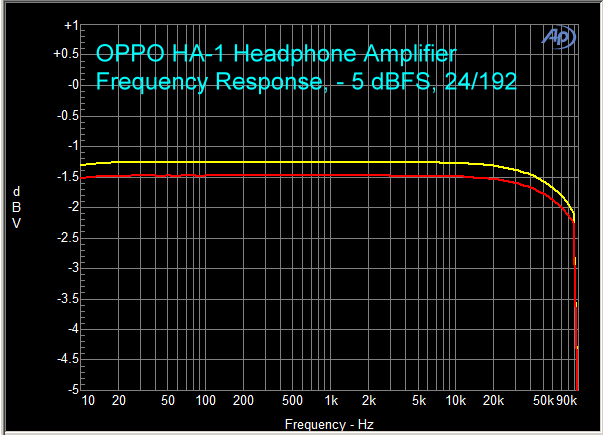 OPPO continues to amaze everyone with their products. The BDP-105 Blu-ray Universal Player is a legend. Now the PM-1 headphones are startling us all, and the HA-1 . . . well, all I can say is if OPPO were a publicly traded stock, I would be sad that I couldn’t buy any, since I review their products.

The HA-1 is a killer. I got one is silver and it’s gorgeous to look at and dazzling to listen to. Should I say, “Highly recommended,” or have you already assumed so?