Newcomer AURALiC brings headphonaphiles one of the best performing headphone amps we have tested and I have heard. The sound it produces is extremely transparent and dynamic. Music of all types is recreated with passion and emotion to match the artists performing. Pair it with the AURALiC VEGA DAC, and the HiFiMAN HE-6 for a truly reference quality personal audio system.

Professional electronic and recording engineer Xuanqian Wang and business manager Yuan Wang founded AURALiC with the idea of reproducing the tiniest details of music in order for the emotion and inspiration to flow through. Music is art and their goal is to connect the listener with the musician, allowing them to experience something more than sound. I had the opportunity to meet Xuanqian recently at the 2014 Munich High End Audio Show. He was full of knowledge and enthusiasm for high quality music reproduction. I got a preview of their upcoming music streamer and custom software and came away feeling there is a reason the VEGA DAC and TAURUS headphone amp perform so well- they know what they’re doing.

The design of the TAURUS was inspired by the work done on analog mixing consoles by Rupert Neve. That was obviously a great choice of inspiration as the TAURUS reproduces music with an enchanting and blissful tone. The AURALiC TAURUS MKII is hands down one of the best headphone amps on the market.

The cabinets of AURALiC equipment make use of an alloy called AFN402, made up from iron, nickel, silicon and other metals. This material is supposedly very effective at isolating electromagnetic interference. Even though the esthetic design of the TAURUS is clean and simple, it will still make a statement in your setup. On the front are buttons for power, output – STD or BAL, and input – RCA or XLR, along with output plugs for 1/4″ (6.35mm) and 4-pin XLR headphone jacks. Turning the unit around reveals both RCA and XLR inputs along with RCA and 3-pin XLR outputs.

At 11” width by 9” depth and a slim 2.6” height, the TAURUS is smaller than your standard rack unit, but not nearly as compact as something like the Meridian Prime. The unit is not excessively heavy and the chassis feels rigid and well built. 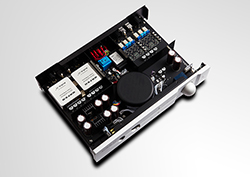 Inside are the AURALiC ORFEO Class-A output modules designed for very low distortion and a warm and natural sound, one that pays homage to the Neve 8078 console. Capable of 1000mW into 600ohm, the TAURUS can easily power headphones like the HiFiMan HE-6.

The output control switch can be set to STD (standard) for 4500mW of continuous undistorted power into 32ohm, or BAL (balanced) for 1000mW into 600ohm. BAL mode does get a bump in voltage, at the sake of current, which helps drive the HE-6. When in STD mode, all the output jacks are active, but rear RCA outs are shut off in BAL mode. AURALiC recommends only connecting one type of output at a time. In fact, they warn the user to disconnect headphones when using the TAURUS MKII as a pre amp. This is due to the front and back outs running in parallel and too much power could be sent into the headphones. They also make sure to warn the user to NOT use a mono TS 6.35 plug as that could short out the amp and fry the ORFEO modules. Glad I don’t have any mono plugs around!

AURALiC recommends at least 100 hours of burn in, but suggests that 500 hours are key for the TAURUS MKII to sound optimal. Also, given this is a Class-A product, they recommend a solid 30 plus minutes of warm up time before each listening session. I can’t say I was always patient enough to wait that long before listening to the TAURUS.

I setup the TAURUS for use with Audeze LCD-X and LCD-3 and HiFiMAN HE-6 planar magnetic headphones.

The AURALiC TAURUS MKII Balanced Headphone Amp In Use

The AURALiC is frighteningly transparent. I find transparent to be one of those adjectives that doesn’t mean much until you experience it. Listening to music through the AURALiC TAURUS is a perfect example of what is to be expected from a transparent amp. There is nothing between you and the music. The virtual recorded space begins to sound like a real tangible space, voices and instruments take on a life of their own. This is what the AURALiC does with amazing grace and ability.

Jónsi’s We Bought a Zoo score comes alive via the HiFiMan HE-6 and TAURUS MKII. His unusual Icelandic voice sounds more intimate and gentle than I’ve heard on other setups. The heavily used mallet instruments strike with a beautiful intensity and vibrancy that isn’t bright, harsh or unpleasant, instead the AURALiC invites you in and leaves you wanting more. It allows you to hear things like the thump of the damper pedal on piano passages and the gentle sizzle of a crescendoing cymbal. Over the Audeze LCD-X I felt things get a bit muddy in the midrange, but the LCD-3 kept things crystal clear. In general I still believe the LCD-3 are superior to the newer LCD-X and hearing how well they paired with the AURALiC TAURUS placed that notion in concrete.

On the new Chesky Ultimate Headphone Demonstration disc, which is filled with high-resolution binaural recordings, the TAURUS absolutely sung with musicality. “Las Perlas de tu Boca” features an upright bass on stage left and the TAURUS handles it with incredible clarity and tautness in the bass through the HE-6 headphones. The soundstage is both wide, deep, yet very well controlled. Instruments are planted in one place and do not sway around the virtual space. With the Audeze LCD-X cans, the bass was suitably velvety, yet controlled. Female vocals were strikingly clear and realistic.

On some harder hitting music from Kanye, the TAURUS puts out a lot of bass for the HE-6 yet each low frequency note is still clearly represented. The TAURUS never came across as bright, harsh, or with too much presence. It is just laid back enough to allow me to slip into the music. I felt free to listen to any type of music with the AURALiC, confident it would sound the best it could.

The AURALiC TAURUS MKII Balanced Headphone Amp On The Bench

I attempted to get some information on the internal design but no information was supplied. The website mentions that patents apply to the unit but I was told these were filed in China.

This unit performs like the proverbial straight wire with gain. A gain of 4 (12dB) to be exact. Only the channel separation was average. The challenge to other companies is produce these numbers at the same or less cost. 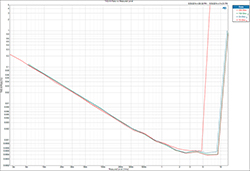 Headphones impedance varies significantly depending on model. The figure above shows the maximum voltage the TAURUS can drive into loads that differ by a factor of 20. The maximum signal level output be before the 1kHz THD appears to clip at a very low value of 0.0004% (-108dB) was 9.0VRMS at 150 Ohms, 8.5VRMS at 33 Ohms and 4.7VRMS at 15 Ohms. You can get more swing out of this is you define 0.1% as clipping. This occurs at 15VRMS into 150 Ohms, 14VRMS into 33 Ohms and 5.7VRMS into 15 Ohms.

At the lower impedances we could use power as a metric. Into a 33 Ohm load at 0.1% THD the TAURUS sources 6W average and for a 15 Ohm load 2.2W average.

The signal to noise ratio was 115.4dB in the worst channel. The best DAC we have tested happens to be the AURALiC VEGA and produces an SNR of 122dB ref 0dBFS at 4VRMS. In light of the VEGA, the number is a little disappointing and is indicative of the use of a mechanical pot followed by a fixed gain. A modern gain optimized digital controlled analog volume would have a slightly lower noise but the company might argue that this would result in higher distortion numbers (Benchmark and Funk have made this argument). In practice if you could hear the noise with a very sensitive closed back headphone with the volume at maximum (highly unlikely) the full scale signal would be up 115dB and would destroy your hearing.

Hum spurs are virtually not existent with the largest at 300Hz 120dB down from 4VRMS driving 15 Ohms.

The graph below shows the frequency response is down -0.25dB at 70 kHz driving a 15 Ohm load. 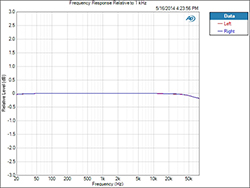 The crosstalk was not however state of the art with a constant -50dB separation with a 15 Ohm load. We tried many different loads and volume control setting but results were similar. From the RCA output jacks separation was -60dB to 10kHz and moved slightly to -57dB at 20kHz. 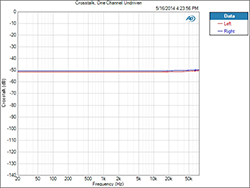 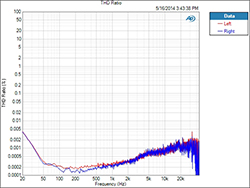 The spectra for a 1kHz sine wave test signal, at 4VRMS into 33 Ohms, is shown below. 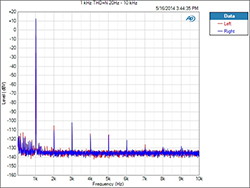 The Y axis is in dBV so the 4VRMS output is 12dBV. The THD was 0.0005%. The 3rd harmonic is the largest down at 115dB down. The other ones that are visible above the low noise floor are 120dB down. That is a 1 millionth of the signal level.

For some reason, I had originally assumed that the TAURUS MKII was in the $4,000-$5,000 range, so when I started listening to the unit, I thought that it was actually performing at a level akin to its price. Then, when I checked on the cost of the TAURUS, my mind was blown. For $1,899, this headphone amp is a steal. The transparency is haunting, and every type of music I threw at the TAURUS was delivered with passion and musicality.

The AURALiC TAURUS MKII is simply one of the finest headphone amps on the market and should not be missed. This is one of the few blind purchases you can’t go wrong with and I say that with confidence. If you have a short list of headphone amps to consider, make it really short, because you will very likely decide to purchase the AURALiC TAURUS MKII.