The NAD D1050 is a full-featured DAC with high resolution USB audio support. Plenty of inputs with two each of optical and coax make this a versatile DAC. The NAD D1050 even features both RCA and balanced stereo output. Enjoy neutral, spacious sound with all the intricate details of 24bit/192kHz material from the NAD D1050. 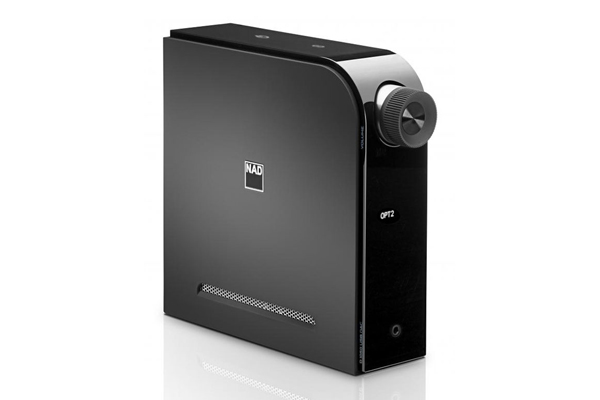 The NAD D1050 DAC is part of the Digital Music D-lineup from NAD, also consisting of the D3020 DAC Amplifier and the D7050 Network Amplifier. This series, specifically the D3020, pays homage to the iconic NAD 3020 from the 70’s, a unit which helped to expose the world of hi-fi to a whole new set of listeners. The D1050 is the most straightforward unit of the group, featuring an asynchronous 24/192 USB DAC and headphone amplifier. It is capable of handling all, or certainly most, of your digital to analog conversion needs as it has 2 coaxial and 2 optical digital inputs to go along with the asynchronous USB input. I often get asked why USB audio is better than digital coax or optical and the answer is simple. With asynchronous USB, the unit on the receiving end, the NAD D1050 in this case, controls the output timing with its own clock. This allows for the lowest possible jitter. The NAD D1050 retails for $499 which puts it near the intro level of USB DACs. Fortunately this unit delivers better than intro level performance.

All three units in the D series sport the same vertical stance and simplistic styling. They can certainly be placed on their sides, but the design looks best in my opinion when standing vertically. The NAD D1050 is a fairly small unit, although not quite as compact as the tiny Meridian Prime (of course the NAD is also a quarter of the price). When standing vertically, it takes up no more desk space than most calculators would. The sides are a matte finish with a rubbery texture, while the front and top are gloss black. Separating the front from the top is a nice rounded corner. Subtle white LED icons light up on the front to indicate input and the sample rate of supplied digital signal. One thing to note, the unit will play back native 88.2 and 176.4 kHz files, there just isn’t an icon for those less common rates. Power and input functions are controlled by touch sensitive buttons on the top. The power button has a faint orange glow with the unit is in standby mode.

Inside the NAD D1050 is a USB Audio Class 2 XMOS USB receiver, a Cirrus Logic CS4398 DAC chip, and a Texas Instruments LME49860 op-amp. The Cirrus Logic CS4398 is their flagship processor, capable of 120 dB dynamic range and even has support for DSD, although NAD did not include this feature.

The NAD D1050 will deliver full 24/192 out of the box with Mac OSX but requires a driver download in order to output a sampling rate over 96kHz on Windows. The driver was easy to locate on the product’s homepage and install was a breeze. On the back there are outputs for both unbalanced RCA and balanced.

I used the NAD D1050 with my Windows 8.1 PC and foobar2000 in ASIO mode. I listened both directly via the headphone out and with a couple of headphone amps, the HiFiMAN EF-6 and AURALiC Taurus MKII.

Hooked up to external headphone amps, the DAC’s performance was very good. I heard little to no noise from the unit and anything major would have been audible via the Taurus. Soundstaging was precise and had excellent depth. The NAD D1050 can play any musical style well and, given the $499 price tag, delivers excellent value. I could toss both high res 24/192 files and compressed MP3 files at the NAD D1050 and it didn’t miss a beat. Compressed 320kbps MP3 songs from Keith Urban’s Fuse album had excellent neutral tonality and Keith’s voice was strong without an overabundance of sibilance. Compression artifacts could be detected, but did not detract from the musical enjoyment. The only area I felt the NAD D1050 lacked in was liveliness. There were times when the music was pleasant, sounding well-balanced, but a bit too clinical. For instance the bass track on Ellie Goulding’s “Anything Could Happen” could have used a touch more slam. On Chesky’s Ultimate Headphone Demonstration Album, there could have been more dynamic zing to the brass instruments on “When the Saints Go Marching In”. I am of course being picky, trying my hardest to find any faults in this DAC. At the end of the day, the NAD D1050 sounds very good and accomplishes a lot for only $499.

One thing to note is when cycling through music, there is an audible click of a relay whenever sampling rates change. I suppose this might bother some, but it was not a big deal to me.

To test out the unit’s headphone amp, I hooked up a range of headphones including the Audeze LCD-X, HiFiMAN HE-400 planar mags, HiFiMAN RE-600 in-ears, and Grado S60e.

The Grado S60e was a great match with the NAD D1050 if you plan on using the built in headphone amp. The Grado’s don’t take much juice to drive and paired well with the D1050. Another great match was with the HiFiMAN RE-600 in-ear monitors. They sounded great on tracks from Alicia Keys’ “Girl on Fire”, which featured excellent tonal quality to Alicia’s voice and a firm bass line, to Kyle Eastwood’s beautiful theme to Gran Torino. Via the NAD D1050, it sounded transparent and both Clint Eastwood and Michael Stevens voices carried lovely presence and body.

Just for fun I thought I’d see how the D1050 performed with some planar magnetic designs. I decided to try the Audeze LCD-X and HiFiMAN HE-400 since both are fairly efficient. Since the output on the D1050 is limited to 3.5mm mini-plug, a ¼” plug adapter is required for cables with the larger plug. Even with the LCD-X’s sensitivity, the amp inside the D1050 wasn’t the best match. Bass output on both cans was a bit shy and the detail and texture of low notes was missing. However, the soundstage was still wide with tons of depth. On the 192kHz Chesky recording for their Ultimate Headphone album, “Don’t You” will send you into a huge auditorium with instruments far left and right. The sound is clean and neutral, but lacks the dynamics and texture of a larger amp. Overall, it was my experience that the NAD D1050 paired much better with easier to drive dynamic driver designs rather than the more power hungry planar magnetics.

I did have one minor quibble with the interface of the D1050. When using the unit’s headphone amp, nothing is displayed to show current volume level. Since the volume control is digital, the knob does not have a start and stop point, meaning if you want to turn the volume all the way down before plugging in headphones, you have no way of knowing where 0 dB is. My strategy was to keep spinning the knob till I felt the output would be low enough, and then to begin music playback. I am hoping future versions, or any model that may replace the D1050, has a dynamic digital display, that can convey more information like volume setting.

The NAD D1050 is a great sounding, versatile DAC with high resolution USB support and plenty of digital inputs. The only downsides to this unit would be in the lack of visual queue for the volume setting and perhaps the amount of user input required to change volume levels. It was a bit frustrating having to turn the knob so many times for small db gains. Also, the built-in headphone amp was not the best pairing for power hungry planar magnetic cans, but handled dynamic driver designs with ease and grace. Fortunately, the NAD D1050 rings in at $499 and is, in my mind, a near bargain.

At the end of the day, what the NAD D1050 really brings to the table is a quality Cirrus Logic DAC with very good sound quality, in a small package, and all at a reasonable price. The NAD D1050 makes an excellent choice for a budget USB DAC.