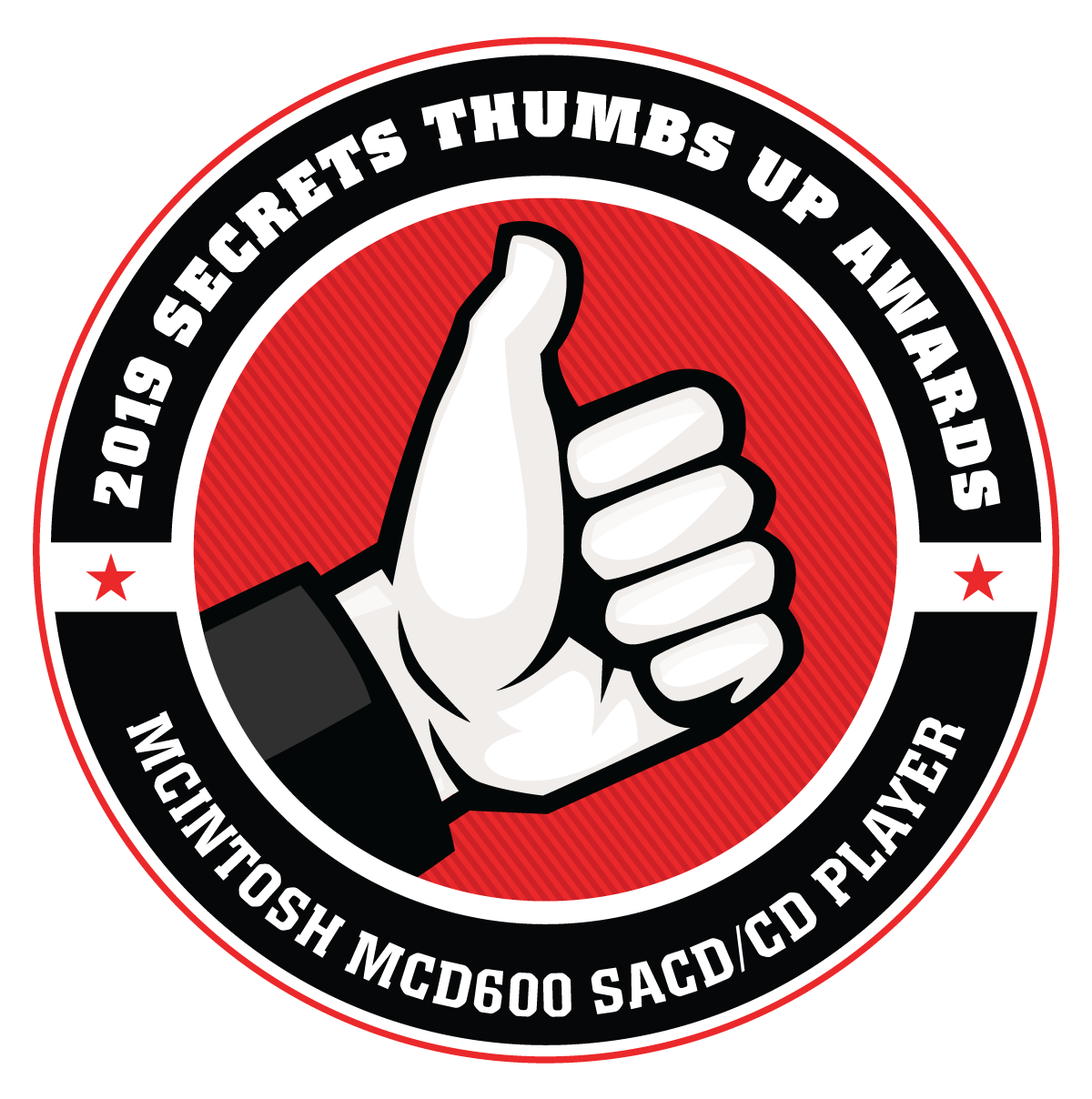 Built with the same quality that all McIntosh products are known for, and the ubiquitous chrome, glass, and green and blue lights that are distinctive features of their products, the McIntosh MCD600 SACD/CD Player is like no other disc player in the consumer market today.

It seems that we at Secrets have been getting our eyes and ears on several new products from the company located in Binghamton New York, of late. I am fortunate enough to be reviewing the McIntosh MCD600 SACD/CD Player. The McIntosh MCD600 is the heaviest and most solidly built disc spinner I have ever had the pleasure to review and I was anxious to listen to my extensive SACD collection on it.

The McIntosh MCD600 includes both fixed and variable balanced and unbalanced outputs; the variable outputs work with the volume control which means you can connect the player directly to an amplifier, eliminating the need for a preamp. This is probably the best choice for audio purists. Coaxial and TOSLink digital outputs are included if you want to send the digital audio signal to an external processor or DAC for conversion to analog.

The MCD600 also has coax and optical digital inputs so other digital sources can take advantage of the processing prowess of the 32-bit DAC which up-samples all PCM to 32/384 kHz. Switching inputs can be done with the knob on the player’s far left or from the remote control. The display briefly tells you which input has been selected. The High Drive headphone amplifier section features a bump in gain and output power, so it can drive almost any headphone for private listening. 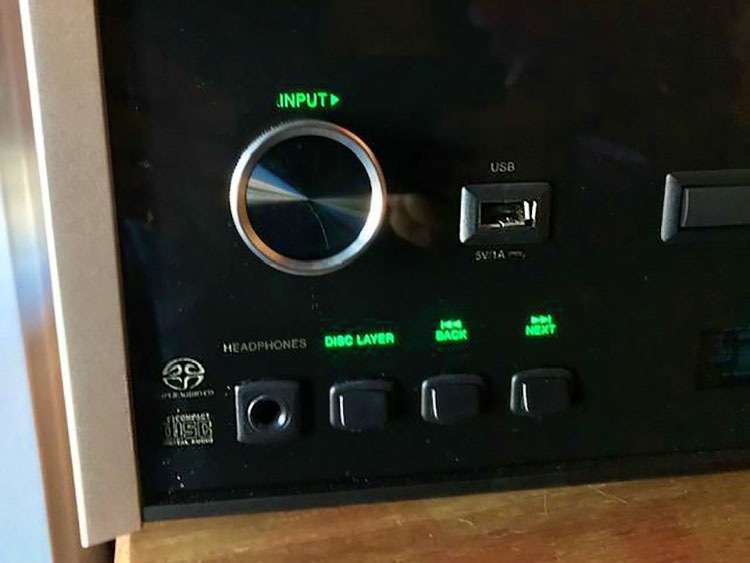 The twin laser pickup can read almost all shiny discs which includes SACD, CD, CD-R/RW, and DVD-R. A new aluminum die-cast transport tray and an advanced digital servo provide quiet, smooth, and accurate disc handling. The MCD600 reads the disc data twice for ensured accuracy prior to playback. The data port in the back allows it to work in concert with all other McIntosh devices, as well. The front panel is illuminated with a new direct LED backlight that makes it easier to see from across the room. The display scrolls disc information when playing SACDs and you can toggle between layers on the disc (CD, SACD stereo, or multi-channel) from the front panel or the remote control. All the basic features are on the remote; skip, fast-forward, back, and mute buttons. Interestingly, you cannot open and close the disc transport with the remote, a feature I am fond of, but being able to change the disc layers from the remote allows for quick comparisons between the PCM and DSD layers, very cool!

Some buttons on the remote are used to operate other McIntosh products, so it must be considered a universal handset (an HDMI input button for example). Not being backlit was my only complaint, but not being a home theater product, I did not find it too disconcerting. A USB port in the front allows you to play your hi-res music files as well. 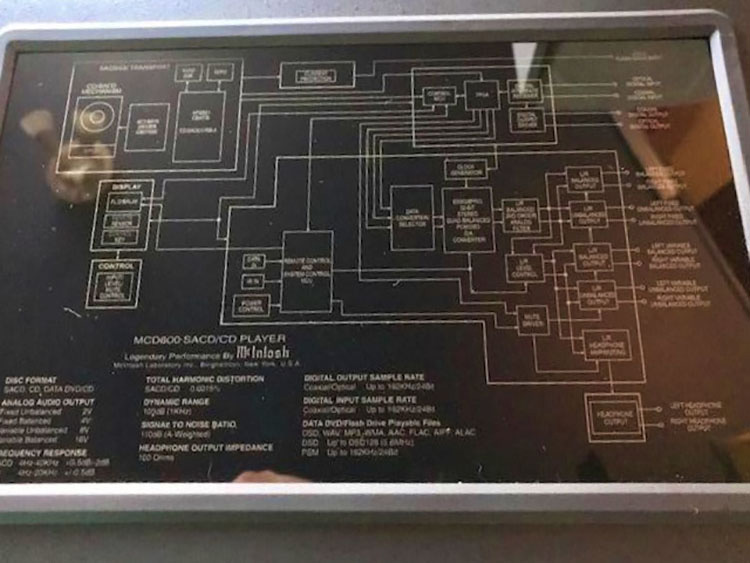 The top panel is glass and shows a schematic block diagram with performance specifications silk screened onto it. The overall construction of the MCD600 is impressive, but as with all McIntosh products you will either love the slightly retro-look or not. Many high-end audio companies have a distinctive style, like Classe, Mark Levinson, and Moon for example.

Though it is considered a thin slice of the current audio market, I do miss that the MCD600 does not play DVD-A discs, of which I have several. I understand that the MCD600 would have to incorporate a video section to perform this function, so it seems a reasonable design choice. On the other hand, not being able to play my large multi-channel SACD collection in their surround format is unfortunate. There is no HDMI output for hi-res multi-channel listening. That said, all my multi-channel SACDs include a stereo layer in DSD and so my review will reflect what two-channel DSD direct sounds like to my ears. You have a choice of outputs in coaxial, optical, or balanced (XLR) cables. I tried the coax to check compatibility with my Emotiva UMC 200 pre/pro, but ultimately used a meter length of balanced XLRs from Monoprice so I could finally listen to DSD directly without conversion to PCM first. 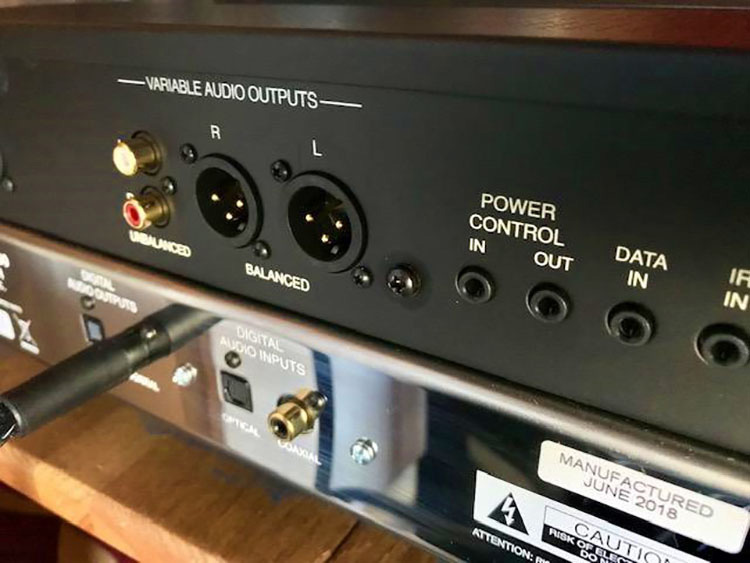 Make certain that your balanced connections go into the variable outputs and not the fixed ones. I made that mistake briefly and feared for my life… or my speaker’s lives, to be more precise. Fixed will go into the back of your processor where it can control the volume. In the end, investment in a product of this caliber comes down to performance and sound quality. It’s still nice to know that the MCD600 is built to last and you will not have to replace it in a few years. Be honest, how many CD players have you owned since college? I’ve lost count.

The McIntosh MCD600 came delivered in a double box and weighed as much as some amplifiers I have reviewed. Setup was straightforward with a single coaxial connector to my pre/pro. Listening to CDs did not sound all that different than my OPPO UDP-203, but then again, the DAC I am listening to is in an Emotiva UMC-200. When I hooked the MCD600 up to my Emotiva UPA-1 monoblocks via balanced outputs, I discovered the real strength of the McIntosh.

I realize that not everyone has balanced inputs on their amplifiers but skipping a processor and going directly to an amp is a great way to squeeze the best sound out of your system. The difference in quality was so astonishing that I had my wife sit down for a listen. Even she heard the difference and that is not usually the case. 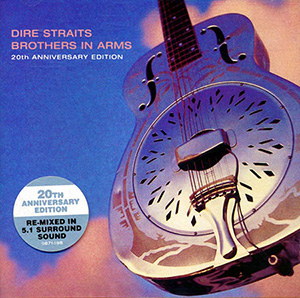 Even though this recording was in multi-channel, I was impressed with the detail and openness the MCD600 brought out from this disc. Money for Nothing starts out with a plaintiff cry of “I want my MTV” and then runs into Knopfler’s buzz saw guitar introduction. The sound of that intro made the hair on my arms stand up.

Not only did it sound live and in the room, the soundstage was much greater than I had ever heard before. As my dear wife exclaimed, “Wow…awesome!” I couldn’t have said it better. You could easily hear the rasp of his fingers on a string, or a slight breath intake, and yet the full weight of the band was there as well. Bass was solid, and the kick drum was a virtual gut puncher. It felt as though my listening space had doubled in size. Closing my eyes, I could imagine where each player was before me in the room. This is what listening to music should be like. Did I prefer stereo over the multi-channel? Frankly, with sound this good and a soundstage this expansive, I would not consider stereo a lesser evil. 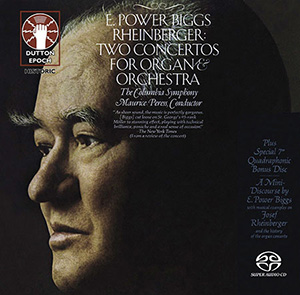 Performed by E. Power Biggs and the Columbia Symphony, this delightful re-master from a quadrophonic recording from the 1970’s sounds excellent, with a powerful Moller organ and the acoustics captured in the St. George Episcopal church in New York City.

Again, the spaciousness of the recording venue was realistically portrayed with sweet strings and growling pedal notes from the organ. Both concertos are about 20 minutes in length, so listening to them together is an easy, simple pleasure. There are few composers that write sweeping Romantic music for organ and orchestra, but these concertos are real gems and this recording sounds fresh and new, as if recorded only yesterday. There was no hint of strain or distortion, even when I cranked up the volume. The MCD600 plays music with a clear and dynamic presentation. 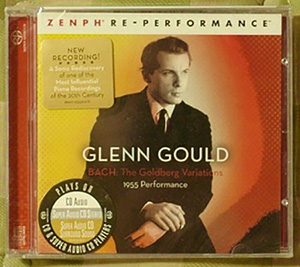 This release takes the original recording and through software, extracts and encodes the details of how each note was played including nuances like volume, articulation and pedal action.

The encoding is played back on a grand piano fitted with computers and hardware that allows the listener to hear and experience the actual performance. Think of it as a digital player piano that recreates the original performance without the guttural sounds Gould would make while performing. The texture and sound quality of this re-performance are pitch perfect and there is a binaural stereo version as well. This makes the performance 3D in sound quality and the MCD600 captured it in all its purity and tonality. Think of this as the original performance in a state-of-the-art recording. From the upper registers to the deep bass notes, it sounded strikingly real and present with a big, open sound. Capturing a piano and making it sound intimate and “real” can be tough for an engineer, but they pull it off on this SACD.

I played many CDs on the MCD600 and though they all sounded great, I felt the player’s main strength was in SACD play-back. There is a lot of flexibility in how you set the MCD600 up in an audio system, but I found the purest and most enjoyable sound was achieved with balanced outputs into a power amplifier of your choice. It all sounded great with my budget 200-watt monoblocks, and I’m sure more sonic goodness could be squeezed out with a pair of McIntosh tube amps, but THAT is another review for another day. Though the MCD600 doesn’t meet my need for a multi-channel player, it has really piqued my interest in playing DSD directly without conversion to PCM. I’m going to need a new pre/pro and then… well, it might be time to explain to my wife why I need to upgrade yet again. 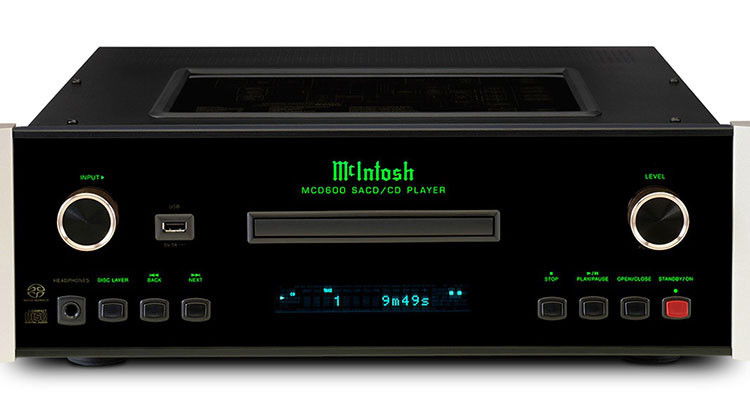 The MCINTOSH MCD600 SACD/CD PLAYER is a component that an audiophile will save up money for because it offers superior build quality and excellent audio performance, especially if you have a large DSD library. DSD sounds clear and powerful all the while being present with a huge 3D sound stage.

The McIntosh MCD600 is worthy of its pedigree, offering solid construction and excellent, detailed sound. Though CD playback was good, I found the biggest sonic benefit when playing SACDs directly through my amplifiers and cutting out the pre/pro middleman. If you have not invested in SACD, this player may make you change your mind about the sound quality of your music. The differences I heard during my time with the MCD600 made me glad that I have invested so much into an SACD collection, but it also made me want more. I am still looking for the fine qualities of the McIntosh MCD600 in a multi-channel player, but until then, I can enjoy great sound and a large sound stage in stereo that makes multi-channel almost superfluous. This player may not be for the first-time buyer, but it certainly is a player we aspire to own someday. Long live the shiny discs!