Wireless HDMI Round Up 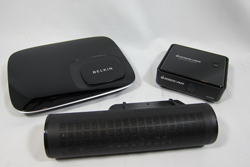 Introduction to the Wireless HDMI Round Up

Now that our TVs are thin enough we often want to hang them on a wall, and manufacturers keep pushing the limits of thickness year after year. CES this year saw the advent of OLED TVs that are just millimeters thick as they no longer need backlighting systems, and serve double duty as a cheese slicer with their razor-thin profiles. Of course when you put this up on a wall, now you have to hide 25′ of cable that you might not be able to route anywhere, or you can be installing a projector in the middle of the room, far away from your equipment rack.

We’ve all given up the wires that hold our computers in place at home, so why are we still so tied down to our AV systems with their placement? After seeing a few wireless HDMI solutions being demonstrated at CEDIA and CES, I decided to see how these solutions fared and put together a selection of them to see if they really do perform well in a home environment, as show floor demos can not be trusted with their 500+ wireless networks wreaking havoc on anything not hard wired.

WIRELESS HDMI ROUND UP

The Solutions for the Wireless HDMI Round Up 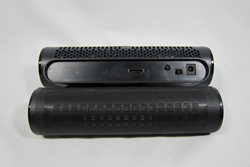 I tested three different solutions: The Belkin ScreenCast AV 4, the IOGear Wireless 3D Digital Kit, and the DVDO Air. Each product was just a little bit different from each the other models and fit different solutions. The Belkin AV 4 was intended to serve as your HDMI switching station, with 4 HDMI inputs that you can switch between from the included remote, it can make all of your HDMI devices wireless without an additional switcher. The IOGear solution has 2 HDMI inputs, so it can switch between inputs as well, but also includes an HDMI output so it can be used to display the same HDMI source on two displays at once. The DVDO has a single input, so it’s meant to be paired with a receiver or processor, and then take the HDMI output from that to be sent to your display or projector. 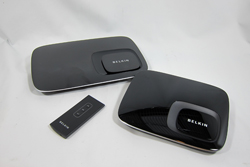 The solutions also differed in the technology they used. Both Belkin and IOGear went with 5 GHz WHDI-compatible devices. The 5 GHz Wi-Fi spectrum is often far cleaner with less interference than the 2.4 GHz spectrum, and can allow faster transfer speeds. Both also use 4 antennas to transmit and a 40 MHz bandwidth so they are capable of up to 600 megabits per second. This is more than enough to handle a 1080p signal at Blu-ray or HDTV bitrates, which are compressed, but not a fully uncompressed signal. These wireless speeds were not available just a couple of years ago, which is why earlier wireless streaming options didn’t really perform well.

The higher frequency also means that it has a lower range than 2.4 GHz so the maximum range is 100 feet with line-of-sight. The DVDO solution uses the far less common 60 GHz frequency spectrum, which is almost completely devoid of any interference. However a frequency this high means that going through walls is simply impossible, as signals will just bounce off. The DVDO is designed to reflect off a single surface, so you can bounce your signal off a wall or ceiling, but otherwise you will need some line-of-sight to make it work. The higher frequency also allows for a maximum data rate of almost 3Gb/sec, or five times faster than the 5 GHz solutions.

All of these solutions promise uncompressed 1080p video and 5.1 audio at the minimum, but there are small differences beyond that. Belkin says they send all their video at YCbCr 4:4:4 uncompressed, so you should try to set your devices to that format, but they only send audio as Dolby Digital or DTS and not the lossless formats. IOGear also promises uncompressed 1080p but also can do lossless audio with 5.1 channels instead of just the lossy formats. Of course delivering lossless audio in addition to lossless video means the IOGear might need a better connection for perfect quality. DVDO is able to move beyond these, promising 7.1 channels of uncompressed audio to go with your uncompressed video, so the compromise with walls does offer more functionality.

Of course the maximum bandwidth of the 5 GHz solutions suggest there would have to be some compression going on, but all of our HD sources are already compressed to save on bandwidth. Using both test patterns and native content, I didn’t notice any additional compression artifacts in the images, so there seems to be enough headroom for these to work just fine with our current content.

The Wireless HDMI Round Up Testing

I tested the solutions in a few different situations: With the transmitter next to the receiver, across the room and unblocked, in an adjacent room, and then across the house with multiple walls between them. I though this would give a good sample of how people would intend to use the devices in a real-world situation. My home also has both 2.4 GHz and 5 GHz wireless networks that are active, using the widest channel bands available, so even if you have something in the 5 GHz range in your home you could expect similar performance I believe. All of these are also plug-and-play setups, so once they were connected I needed to do nothing to make them work. I used an Oppo BDP-93 for some of the testing, and the video output of my MacBook Air for some additional testing as well.

With the receivers under 5′ from their transmitters, I had no issues as expected. If they had failed this test, I probably would have scraped the testing as a whole. Moving the transmitters 20′ across the room with open air, I had no issues still. The signal was good and strong, and both real world content and test patterns showed no loss of resolution or color data. For many people this would correspond to their use of these in real life, letting you send content to a screen across the room, or to a projector mounted away from your components.

The next test was the same distance as the 20′ open-air test, but had no direct line-of-sight of the transmitter. In this case I expected the DVDO to have issues, but it easily bounced off a wall and continued to work just fine. Once I closed a door between the transmitter and receiver, the DVDO stopped working as expected. The other solutions continued to work well, with very few issues coming up at all, and often performing flawlessly despite the wall now in their way.

The hardest test was trying to go across the house with multiple walls and a staircase in the middle. I couldn’t get the DVDO to bounce through the doorway and off multiple walls to work here at all, so it is not good for this situation. The IOGear began to fail a little more often here then I found usable and isn’t something I would use for this either. The Belkin had the best performance of the three. It usually kept a strong signal and good picture here, even with all of the walls in the way. It still suffered from some breakups and audio issues, but it was watchable if necessary, which was more than the other two could manage. I don’t think any of them would be good for this for daily use, but for sometimes streaming content to a remote room in the house it might be acceptable.

Conclusion about the Wireless HDMI Round Up

All of these devices have different features, so it’s impossible to say that one was the best overall. If you have direct line-of-sight and don’t need component switching, the DVDO had flawless performance within its requirements. It also supports 7.1-channel audio, but it does cost more and have more limitations with placement than the other devices. The ability to bounce off one wall means it might work for most people but your environment might vary.

The IOGear did a good job in the tests that were not across the building from each other, and the presence of an HDMI output means it can work in certain situations, such as a room with a TV and a projector, or streaming a signal to a second device in another room, that the other devices couldn’t. The range and AV switching capabilities were a bit behind those of the Belkin if you plan to use it as a main switching hub. For people with multiple walls in the way, the Belkin was the overall best performer of the three. The ability to switch between four HDMI inputs, and label them, was very nice though the remote was sometimes a bit unresponsive I thought, and you only get lossy audio.

Nothing can beat a hard-wired connection for overall quality and reliability, but the wireless HDMI devices that I tested, in my environment, performed reasonably well. If it worked in my space, the DVDO is what I would use as it had the best pure performance in the end, and supported more features than the other two devices. The 5 GHz wireless bands might also become more crowded over time as more and more components begin to support it but 60 GHz will not really have that issue.

If you need to go through walls, or switch among different components, then you should look at the IOGear and Belkin solutions, as they provide an answer for those situations that the DVDO does not. If you only need wireless HDMI occasionally, then the IOGear probably is your best bet, with the HDMI output allowing it to more easily integrate into an existing system than the other devices. If you need a wireless solution, there are now multiple choices out there for you, and one of them will likely fit your needs whatever they might be.