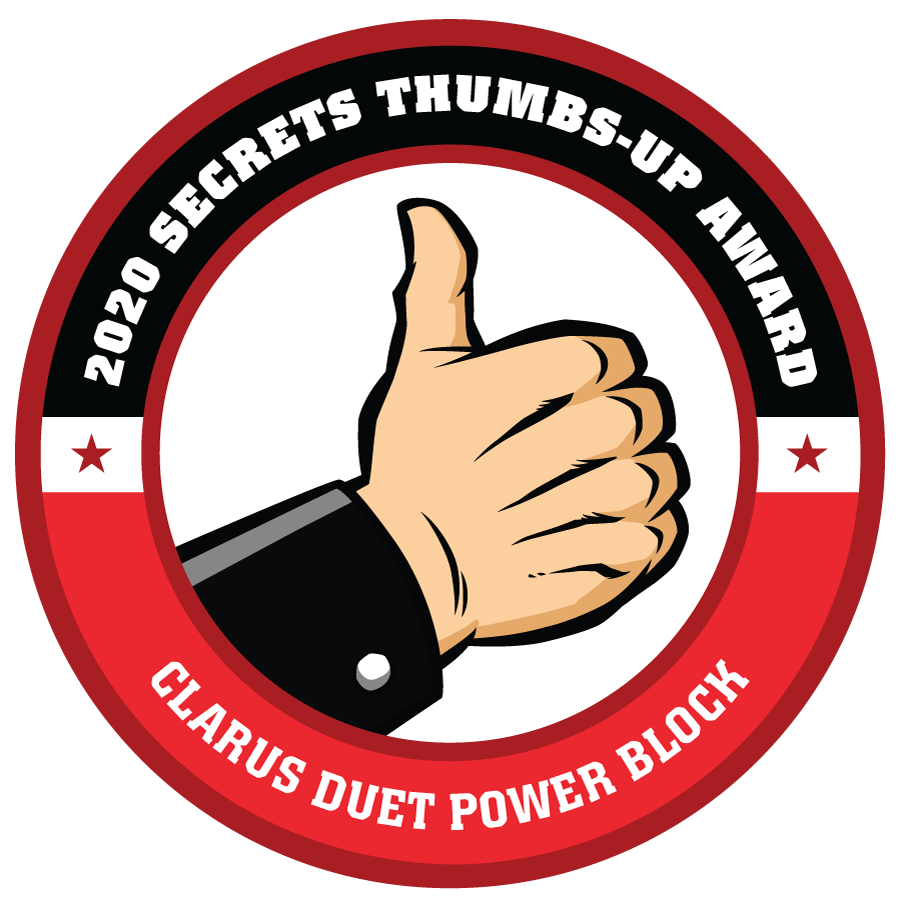 Today, I’m checking out the Clarus Duet Power Block. Designed to clean up power going to amplifiers and subwoofers, I’ll see how it might enhance my home theater’s audio system.
Highlights

Audiophiles and home theater enthusiasts often spend large sums on power amplifiers and subwoofers but fail to address the quality of their home’s electrical service. If your components aren’t receiving clean power, they can’t perform to their full potential. Clarus’ Duet Power Block is one possible solution. Paired with a Clarus Crimson amplifier power cord, this setup promises to filter and clean your electrical before it gets to your amp’s power supply.

The subject of power conditioners and line filters often resides in the category of audio tweaks. These are products that provide that last nth degree of performance and are usually found in high-end systems, and sometimes sell for premium prices. But in many cases, their benefits are undeniable. By taking on the task of power cleanup, the amplifier’s power supply can focus on the job of keeping the amp running at its peak. It’s a subtle effect to be sure but when you’ve already invested heavily in a premium audio system, it only makes sense to wring out every possible drop of performance.

Clarus, a division of Tributaries Cable, has two power conditioners available. Today, I’ll be checking out the Duet Power Block, so named for its two power outlets. It’s designed to filter power for amplifiers and subwoofers, so I’ll be doing just that. I received two units so one will support my Axiom EP-800 subwoofer and the other will plug in behind two Emotiva multi-channel amplifiers, an XPA-5, and an XPA-2. 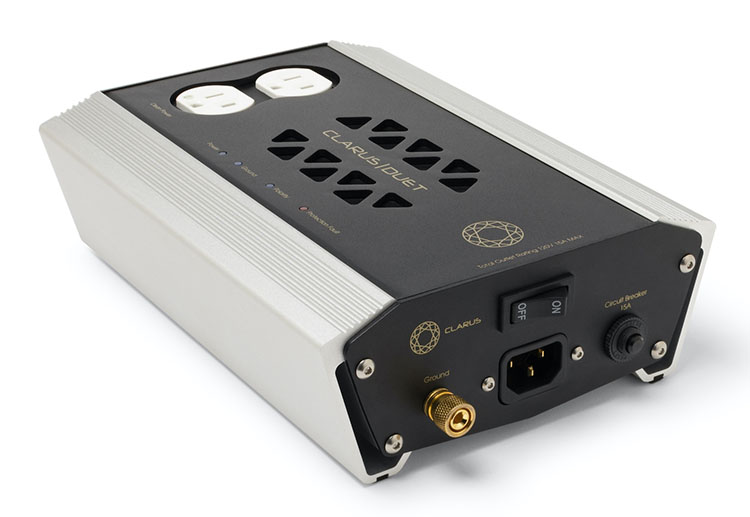 Power conditioners work on the principle of AC line filtration. That is, they filter out noise that occurs at various frequencies. For a more detailed explanation of this, see Dr. John Johnson’s review of the Duet’s larger brother, the Concerto. The Duet is essentially the same component but with only the high current section. Two outlets are provided into which one plugs in either a powered subwoofer or a power amplifier. The line filtration works with Clarus’ C-Core technology which removes AC line noise without affecting fine sonic detail. By lowering the noise floor and ensuring clean power delivery, you can expect to hear a smoother sound rich in detail and free of any veil or mask. 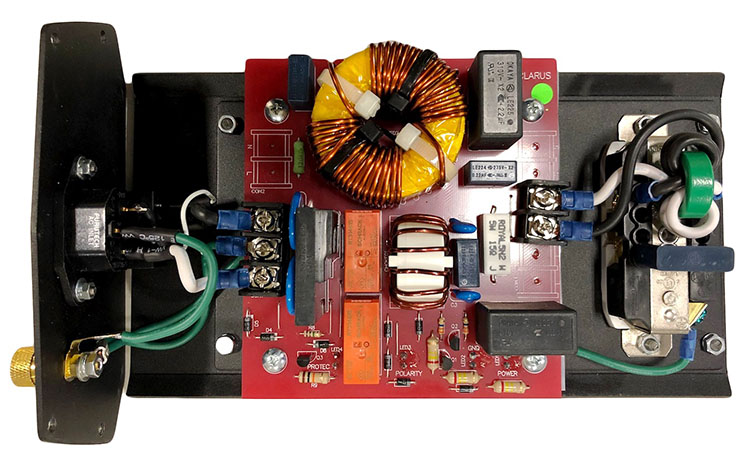 The Duet is compact and easily fits behind your sub or equipment rack. The two outlets are on top along with bright blue status LEDs for power, ground, polarity and protection fault. Yes, the Duet will tell you if your power is out of phase. And it acts as a surge protector. Since many users, myself included, plug their amps and subs directly into the wall, this is a welcome bit of insurance against damaging surges. Here in Florida, the world’s lightning capital, that is of particular value! 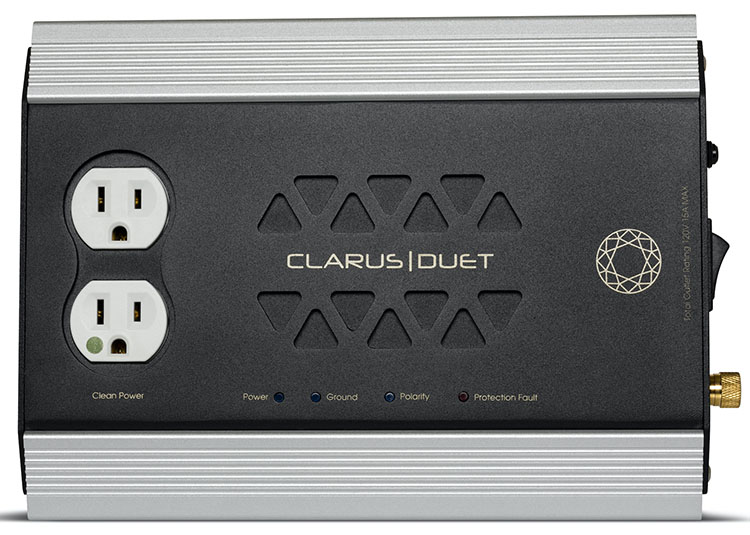 On one end is a large power switch along with a 15-amp breaker and a ground terminal. There is a standard IEC power input into which I plugged in the massive Clarus Crimson amp power cable. I usually use the term garden hose to describe thick cables, but this thing is thicker than that, a full inch thick to be exact. It’s a bit more flexible than you might think but some planning for its placement is required. I coiled them carefully when installing. 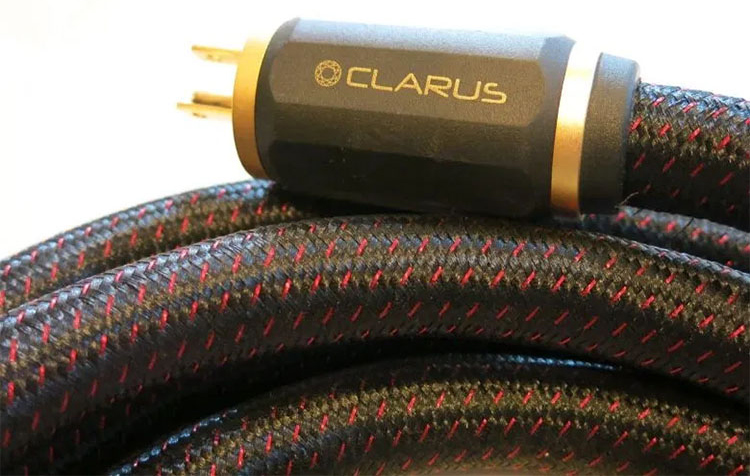 One Duet went behind my Axiom EP800 subwoofer while the other went behind the rack to anchor two Emotiva amplifiers, an XPA-5, and an XPA-2. The Crimsons were then plugged directly into the wall. After powering up the Duets, I switched on the amps and left everything to burn for a few days.

I’ll note here that I do not have the necessary test equipment to measure the Duet’s effect on my audio system. I will only include listening impressions. But you can read a full account with instrumented testing of the Duet’s sister product, Concerto, in Dr. Johnson’s review linked here.

After the burn-in period was over, I settled in to enjoy my theater the way I usually do, by watching movies. The Duets were filtering power to my sub and power amps with the Integra DHC 80.1 surround processor and OPPO UDP-203 plugged into a CX-6 line filter from Emotiva. 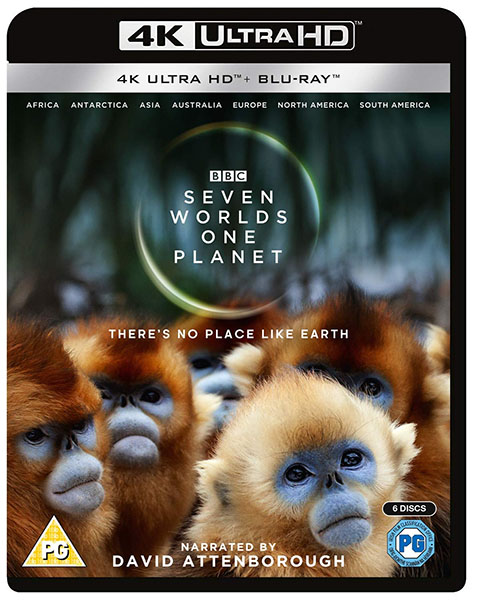 After ensuring I had matched volume levels from before the Duets were installed, I started my journey through the newest series from BBC Earth, Seven Worlds, One Planet. This feature includes three major sonic elements, dialog, music, and ambient sound effects. My impressions of the superb musical score were that it had a definite increase in presence, not in volume but it just seemed more there. I didn’t need any instrumentation to tell me the noise floor was lower. With just the amps turned on, I usually hear a faint hiss, and this was much less obvious with the Duets in place. Musically, this translates to greater dynamic range and smoother highs.

Dialog was also very clear. David Attenborough’s voice has a soothing effect when played through any system but hearing the full breadth of his dialog was very enjoyable. He doesn’t speak in the range where sound becomes chesty, rather, he is more high-pitched with a hint of raspiness. At no time was his delivery anything less than crystal clear.

Ambient effects came across from the disc’s huge soundstage. In this case, it’s DTS-HD Master Audio 5.1. Detail abounded in the tiny sounds made by birds’ wings and the ticking of insects feeding on plants. Watching this series reminded me why experts advise theater builders to spend more money on audio than video. It really does make a difference when sound is this good. 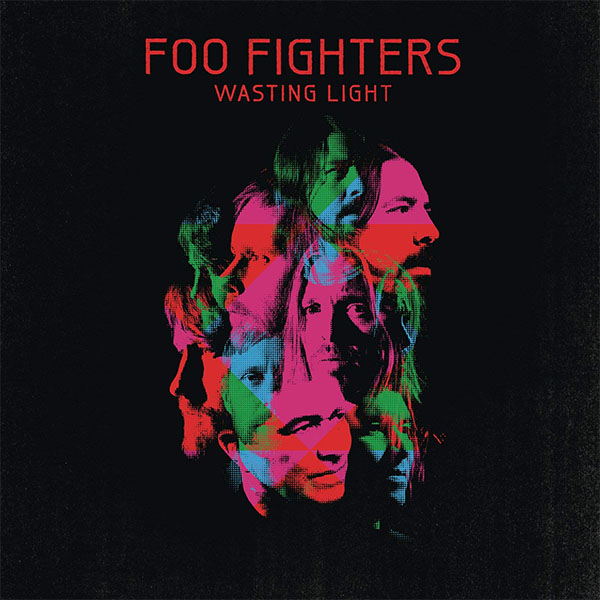 Foo Fighters “Wasting Light”
The Duets also managed to extract greater presence from both CD and SACD recordings. I started with my benchmark rock title, Foo Fighters’ Wasting Light. I immediately noticed the more-forward presentation. At this point, I tried an A/B comparison by listening to the same song with and without the Duets. Since it took me a few minutes to swap cords, the result was less than scientific. But the extra oomph with the Power Blocks in the system was clear on every track. And there seemed to be no downside. Detail and instrument separation was excellent in either case.

On SACD, I have a very Russian sounding performance of Shostakovich’s Fifth and Ninth Symphonies. I paid particular attention to the brass which sounded bigger and bolder with the Duets installed. There was no change in clarity or detail, but I kept writing the word “presence” in my notes. I made the same observation when listening to the San Francisco Symphony play Mahler’s Fifth Symphony. It took this incredibly detailed recording and made it bigger and more vibrant. 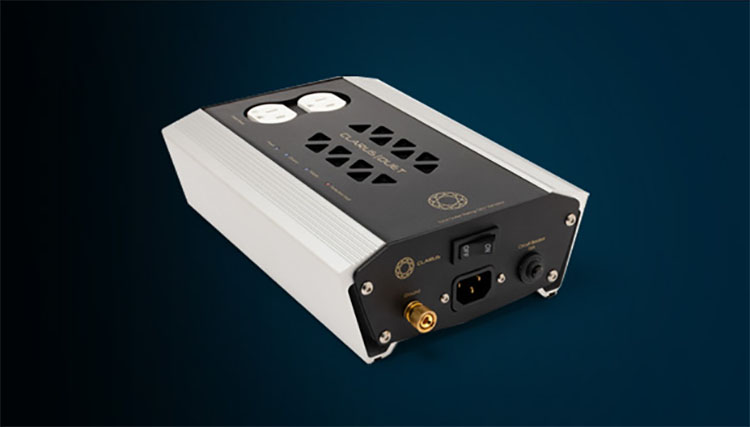 The Clarus Duet Power Block isn’t cheap but when you’ve already spent thousands on an audio system, it makes sense to wring every drop of potential with a high-quality power conditioner.

While there has been debate on the effect of line filtration in an audio system, I most certainly heard a difference from the Clarus Duet Power Blocks. They have no downside other than the fact that they cost nearly as much as my power amps. But their benefit is easily heard. Not only did they lower the noise floor of both amps and subwoofer, but the resulting cleanliness also added presence and boldness to the sound.

If you are a fan of well-engineered and well-built components, the Clarus Duet Power Block will certainly satisfy. The boxes look as though they will last a lifetime and the Crimson power cords are easily the beefiest cables I’ve ever seen. The industrial-grade outlets and switches are also made to last. I have no doubt that these are one-time purchases.

I really enjoyed the effect they had on my system and all the material I listened to. They enhanced the experience with extra presence and sound power. If you are invested in your audio system, I highly recommend giving the Clarus Duet Power Blocks a listen.