That’s a load of features. In addition, it sounds exceptional. The massive RB-1590 power amplifier can deliver 350 WPC into an 8 ohm load, but still has plenty of ability to reveal fine detail and subtle tonal character. Together, they delivered one of the best soundstages I’ve heard in my room with my Gallo Reference 3.5 loudspeakers. 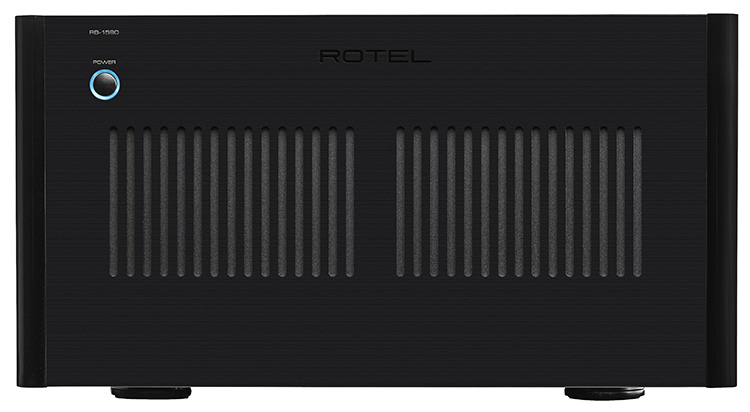 Rotel is a company well known to audio enthusiasts that’s been around for a long time. Since the 1960’s in fact. They were one of the first (if not the first) high end audio company to use the model of designing their own components, but having them manufactured overseas. This has always positioned them as a value leader.

Rotel’s new preamp and power amp combo, the RB-1590 and RC-1590, offer up very impressive specifications for a modest asking price. In particular, the RC-1590 preamp is loaded with features most every sub-$2000 preamp could only dream of. The RB-1590 amplifier offers 350WPC of class AB power for $3000. But, as we all know, features and specifications are worth only the paper they’re printed on.

What matters is how the components perform in the listening room. After spending some time with the RB and RC 1590, I was very impressed. I tested these components as a matched pair, so this review will be about their sound together. I did not get a chance to test each one separately.

We’ll start with the RC-1590 preamplifier. This is certainly not what you’d call a “purist” preamp. It has pretty much every feature you could think of, some of which you’d expect to find in a home theater surround sound processor, not an audiophile preamp. The core of the RC-1590’s design rests on two completely separate power supplies for the digital and analog parts of the unit. The analog side offers both balanced and single ended inputs and outputs.

There are three coaxial and three toslink optical inputs as well as two USB audio inputs that operate up to 192 kHz, 24 bit. A rear panel USB-B connector is designed for most all USB audio devices, while the front panel USB-A connector is designed to work Apple iOS devices. The rear panel USB also accepts both DSD and DOP audio in 1x and 2x modes. There’s even an integrated Bluetooth dongle that allows you to stream audio to the RC-1590 over Bluetooth using either traditional Bluetooth audio or APTX streaming.

There are bypassable tone controls and balance control. Any input can also be set to fixed gain, disabling the volume knob for that input. This allows any input to be set up as a home theater pass-through for use with a separate surround sound processor or with any other volume controlled source such as Sonos®.

Since this is how my system is set up, this was a particularly nice feature to have. An Ethernet jack on the back allows the unit to be connected to the network for firmware updates and automation system integration, but no audio files can be streamed over this connection.

The build quality and feel of the preamp was quite nice for the price. The case itself was the typical stamped steel you’d normally find on a piece of consumer audio equipment, but the front panel and quality of the controls was very nice.

The RB-1590 amplifier is significantly simpler than the preamp. The cosmetic design is similar, but the RB-1590 is a very heavy and solidly built amplifier. The amp will deliver 350 WPC into an 8 ohm load with both channels driven. That’s quite a lot of power for a stereo amplifier. It operates in class AB mode, as you’d expect for this sort of power rating.

The amp is not completely dual mono inside, but close. There are separate toroidal transformers for each channel, but each side of the amp does share some power supply components. There are both single ended and balanced inputs available, dual 5-way binding post outputs that are very solid, and 12V trigger inputs and outputs for remote turn on. While the amp does have balanced inputs, it is not a fully balanced design end to end (this is also true of the RC-1590 preamp). 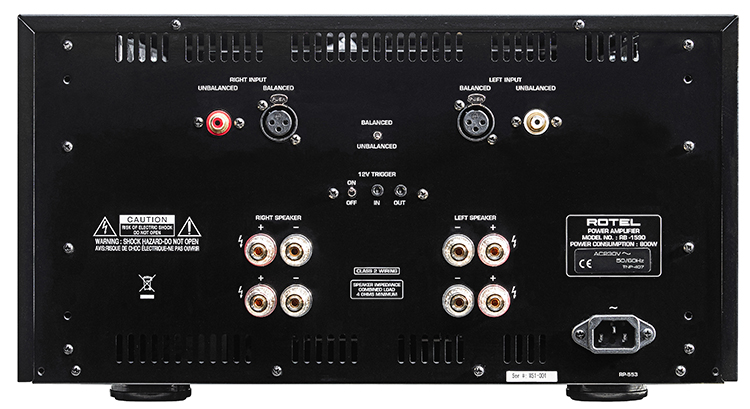 I set up the Rotel pair in my system together and allowed them to break in on casual TV watching duty for a while before testing. I did not test the components separately, only as a pair. Most of the time the preamp was fed with my Oppo BDP-105 player used as a USB DAC with Pure Music audio player software. I did try out the internal DAC, but most of my listening was done using the RC-1590 as a traditional preamp.

The first main impression I got when listening to the Rotel pair was that of space. The soundstage on most every album I played was significantly wider, taller and deeper than with my normal components (an Emotiva RSP-1 preamp and a NewClear NC-1000L amplifier). From combo jazz to electronica, the soundstage reached a good yard left and right from my Gallo Reference 3.5s, with soundstage height up towards the ceiling. The depth was certainly recording dependent but on good recordings like Jon Faddis’ Remembrances in 24 bit 96 kHz, the soundstage seemed to go well past the back wall of the listening room. This is a hard thing for an audio system to do. A lot needs to go right for all those spatial cues to make it through to your brain, so components that can do it tend to have many other redeeming qualities.

The Rotel pair did an exceptional job of extracting detail out of recordings, without being too harsh and revealing of faults. Both micro and macrodynamics were excellent. The big power of the RB-1590 had no problem controlling the bottom end of the Gallo Reference 3.5s in a way very similar to the 500WPC NewClear NC1000L I typically use. The bass performance gave up nothing compared to my normal equipment, but didn’t seem to be any better than my usual system.

Microdynamics I think were improved a bit. Some recordings I remember sounding a bit flat and lifeless were more engaging and enjoyable. I usually associate the “aliveness” of a recording with microdynamics. Those small, subtle changes in loudness are one of the main things that make a recording sound exciting and alive as opposed to flat and boring for me. As with my normal system, the timbre of the Rotel pair was quite neutral. No tube like warmth present, but no glare or harshness either.

When I listened to the built in DAC, I was hard pressed to hear any real difference between the Oppo BDP-105 (which uses a well-regarded Sabre 32 bit differential DAC chipset). This is actually pretty high praise, as the BDP-105 is one of the best USB DACs I’ve heard priced around $1000. I think the bottom line is that the built in DAC of the RC-1590 is very good, and you’ll have to spend considerably more than $1000 to do significantly better. This makes the RC-1590 an even better bargain. You get a preamp with excellent sound quality loaded with features, and very good DAC for $1750. I can’t think of any other preamp or preamp+DAC combo that can offer the same for even close to that price.

Measurements were performed with a M-Audio Profire 610 Firewire sound interface and Spectra Plus FFT analysis software. I drove the RC-1590 using an analog input, so the results you see here do not include any effect of the built in DAC. The RB-1590 was measured using an 8 ohm power resistor as the load. The signal level used to drive the amp resulted in an output power of about 40W into the 8 ohm load. This was necessary to keep the voltage across the power resistor within the range of the Profire 610’s inputs. If I tried to run the amp at any significantly higher power, the input of the sound interface overloaded. Still, this is a reasonable test of the amplifier performance since the average power output when playing music (even pretty loud) is only a few watts.

Once again, we’ll start with the RC-1590 preamp. I measured total harmonic distortion plus noise at 60 Hz, 1 kHz and 10 kHz. Distortion levels are quite low, near that of the sound interface itself at around 0.01% for each tone. The dominant harmonic is the 3rd harmonic, with odd order harmonics decreasing at higher frequencies, although power exists out to very high harmonic order. 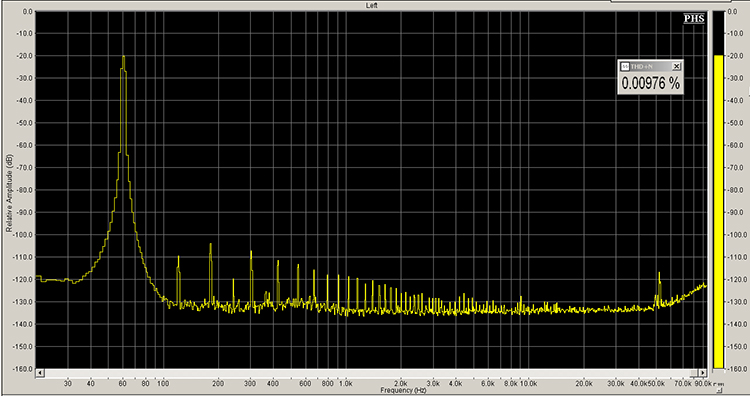 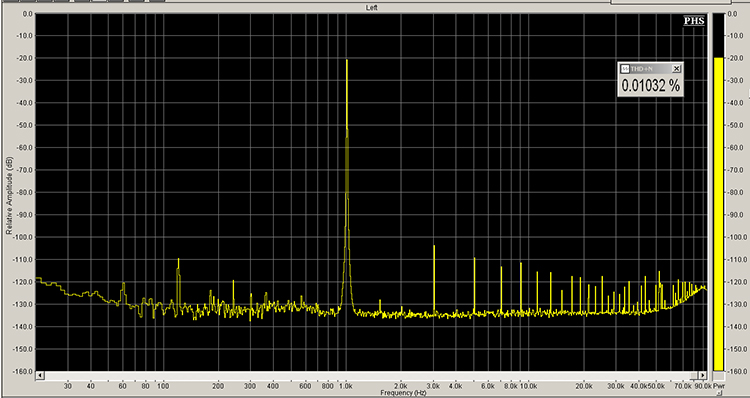 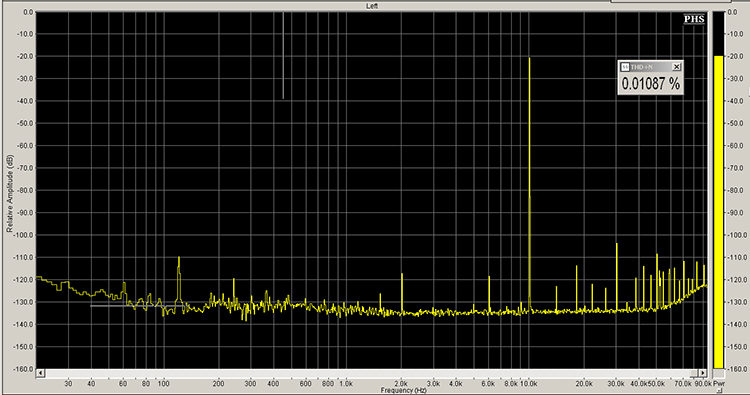 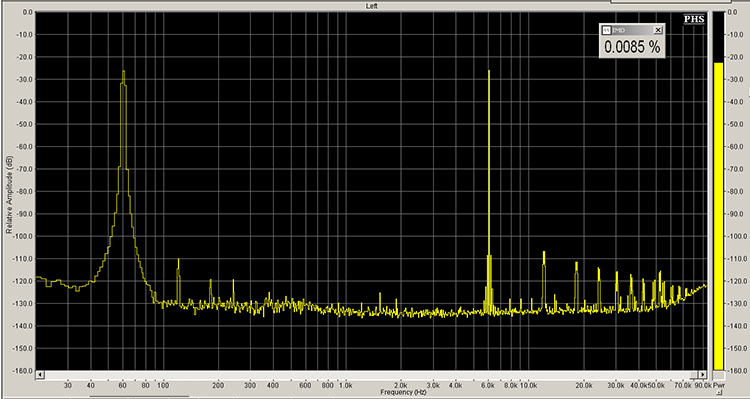 THD+N as a function of frequency shows measurements that make sense with the spot checks above. The level is just below 0.01% from 20 Hz past 20 kHz before it starts to rise (an effect of the sound interface, not the preamp). 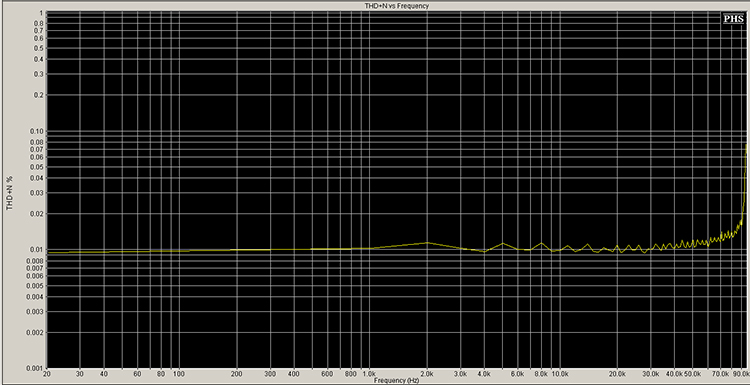 Frequency response is flat as a board as expected all the way to the limit of the sound interface. 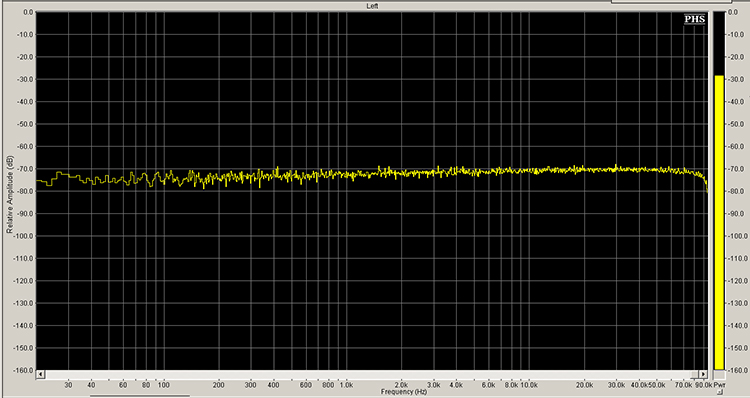 I performed the same suite of tests with the RB-1590 amplifier, but with the amp driving an 8 ohm power resistor. The sound interface was wired in parallel with the power resistor using clip leads.

THD+N was only slightly higher at 40 W power delivery than the preamp, which is a very good result. Odd harmonics once again dominated as expected from a push-pull amp, but even harmonics were not completely absent like they were in the preamp. The THD+N versus frequency plot shows slightly higher numbers than the spot check but still a very low 0.03% from 20 Hz to over 20 kHz. 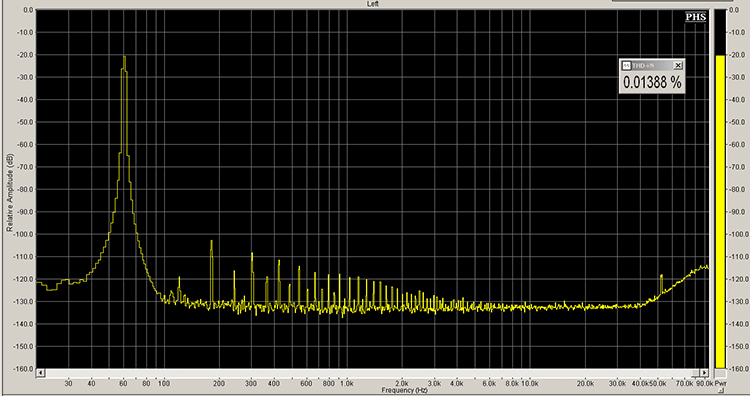 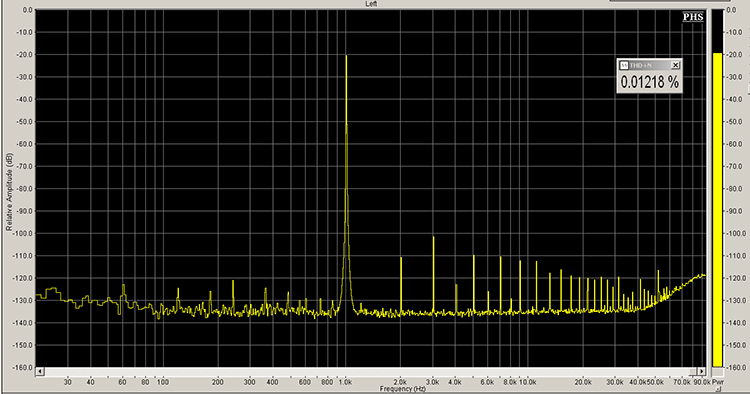 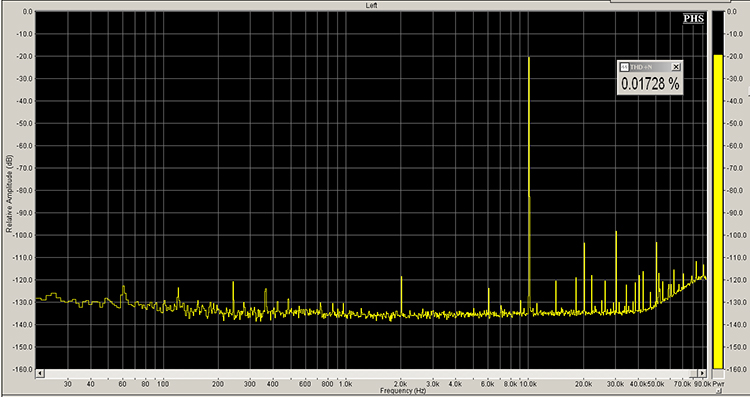 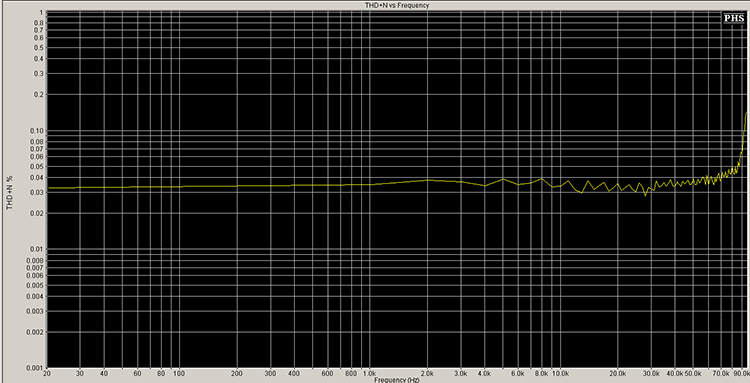 Intermodulation distortion was even lower than the preamp at 0.006%. 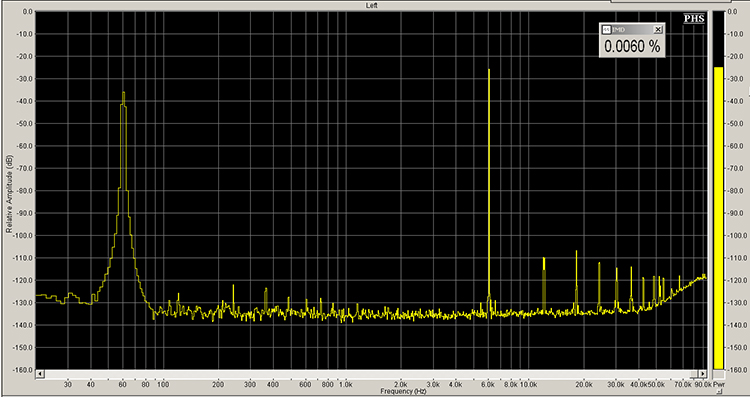 Again, frequency response was ruler flat to the limit of the sound interface. 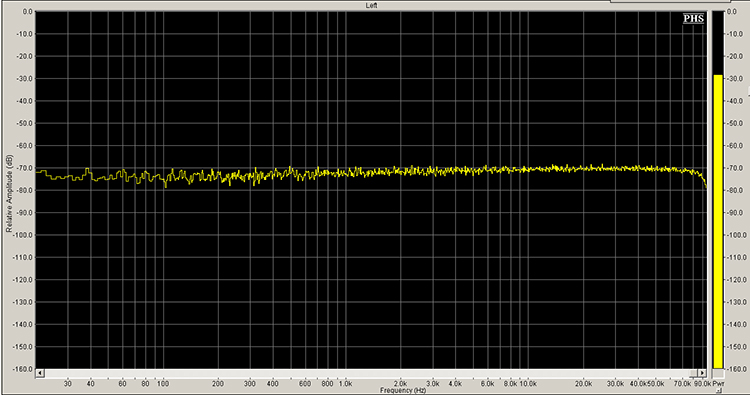 For the money, you’d be hard pressed to find a better sounding, more fully featured preamp and power amp combo than the Rotel RB-1590 and RC-1590. The preamp in particular is loaded with useful and uncommon features that make it as versatile as they come. The RB-1590 power amp has lots of power capable of controlling virtually any loudspeaker, while still being able to deliver a subtle, detailed presentation. The soundstaging performance of the pair was excellent, amongst the best I’ve heard in my room with my loudspeakers. I would not hesitate to recommend this combo for anyone looking to spend about $5000 on a complete set of stereo audio electronics.

THE ROTEL RB-1590 AND RC-1590 AMPLIFIER AND PREAMPLIFIER sound fantastic, and are excellent values for their price point.