Up NextAUDIO-gd HE-1 STEREO PREAMPLIFIER REVIEW
The McIntosh C49 is a solid-state Stereo Preamplifier with a modular design that allows you to upgrade the DAC as your needs change.

The McIntosh C49 is a solid-state Stereo Preamplifier with a modular design that allows you to upgrade the DAC as your needs change. Don’t worry, the outward design hasn’t changed much, with its black glass, green lighting, chrome trim, and industrial look. I often look at McIntosh as a legendary product, like Harley-Davidson. McIntosh pre-dates Woodstock, but it was there supplying power for the musicians on stage. Not many audio companies have that kind street cred or a history that goes back several decades. They never sold out to make cheap gear for the masses. As an audiophile, you should always aspire to owning components that have withstood the test of time like McIntosh gear. Whether you are into tubes, solid state or hybrid, the sound quality is always excellent.

Bass and Treble with bypass

McIntosh has been building long-lasting audio components for longer than I can remember. In college, I saw McIntosh products in all the Hi-Fi shops in town. Heck, McIntosh is still here and almost all the Hi-Fi shops have gone the way of the dodo bird. Though the C49 is a solid-state stereo preamplifier, it manages to retain that McIntosh sound, which is lush and full. It’s designed for both the analog and digital worlds with analog inputs for two balanced, three unbalanced, plus moving coil and moving magnet phono connections. The six digital inputs include the DA1 module with two coaxial, two optical, and one USB input. You can play DSD directly into the C49 through the McIntosh proprietary MCT input found on the McIntosh SACD transports and via USB, which I connected to a Mac Mini. In total, there are 13 inputs, so there is plenty of room for all your devices. Notably, there is no wireless connectivity or network capability.

The DA1 module has an eight-channel, 32-bit digital-to-analog converter that runs in quad balanced mode. It supports DSD256 and DXD up to 384kHz playback for hi-resolution audio. The input names are configurable via manipulation of the input and volume knobs. You can also turn off unassigned inputs, so you don’t have to scroll through them all to get to the one you want. The front panel is black glass with long-lasting LED backlighting. The volume and input knobs have a solid feel that exudes quality. You can feel a slight indent as they turn, and the input selector causes a very faint audible sound as it changes. The volume control is very precise and changes with quick precision.

The remote control was slim and well laid out. It had a nice feel and weight to it and though it was not backlit, I adapted to it quickly. The chrome around the edge made it look distinctive and I was able to distinguish it on the coffee table from other remotes.

The remote can also function as a McIntosh transport remote and control your TV or cable box. My only complaint was the location of the OFF button as it was down alongside the numerical buttons, having the same shape as them as well. To power down the C49, you have to look for it as it blends in too well with the other buttons.

All the connections in the back were solidly made with high quality parts. I connected the analog inputs from my Emotiva UMC-200 with Kimber Kable PBJ interconnects using XLR to RCA cables. My UMC-200 doesn’t have XLR jacks, so I could not benefit from having balanced connections. However, I could have done that by directly connecting the C49 directly to my Emotiva UPA-1 mono-blocks. But I wanted to set this up with my home theater system which required me to connect to the UMC-200. For multi-channel duty, I used an Emotiva LPA-1 seven-channel amp putting out 125 watts per channel. 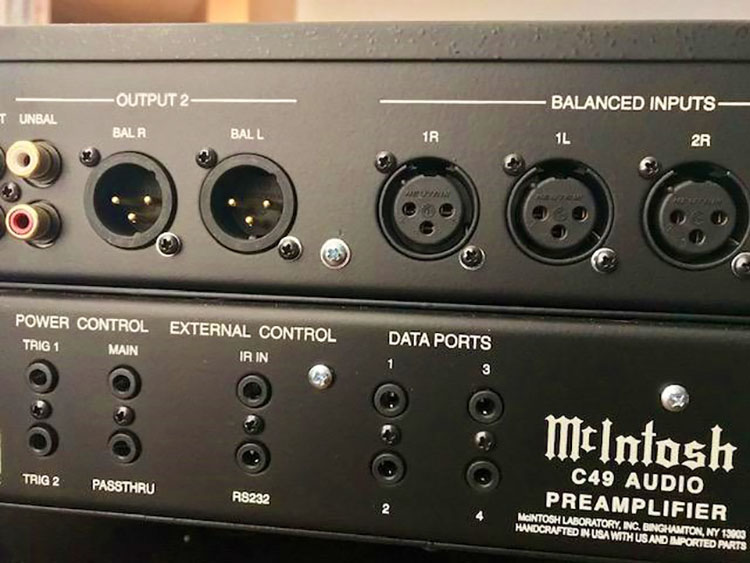 The McIntosh C49 is a stereo preamplifier that can be incorporated into a home theater system should you have single room media center like me. For music listening, I hooked the C49 directly to a multi-channel Emotiva power amplifier and did not use a sub-woofer with my Revel F36 tower speakers. Though I used it to watch movies, I did not incorporate that aspect into this review. I did, however, connect my Mac mini via USB into the C49 so I could listen to DSD music for the first time into a preamp that accepts it. My OPPO UDP-203 will down-convert DSD into PCM/88.4 kHz, which my multi-channel pre/pro handles nicely. All my DSD downloads were at different sample rates, but always in stereo.

As I set up the McIntosh C49, a few things became apparent to me. It was a bit lighter in weight than I was expecting, especially after reviewing the MCD 600 SACD player. The quality of the construction was exemplary, with the chrome and glass being accented by the glow of the soft green LEDs. Setting up and renaming the inputs was a bit tricky as both rotary knobs on the face plate had to work in conjunction. You can also turn off unused inputs; for me that was the phono inputs and a few analog ones as well. This way, when you cycle through them, there is no need to scroll through ones you haven’t connected, thus making the selection process a bit quicker. Being able to name the inputs helped my wife find her way around the C49 for TV listening versus music listening. 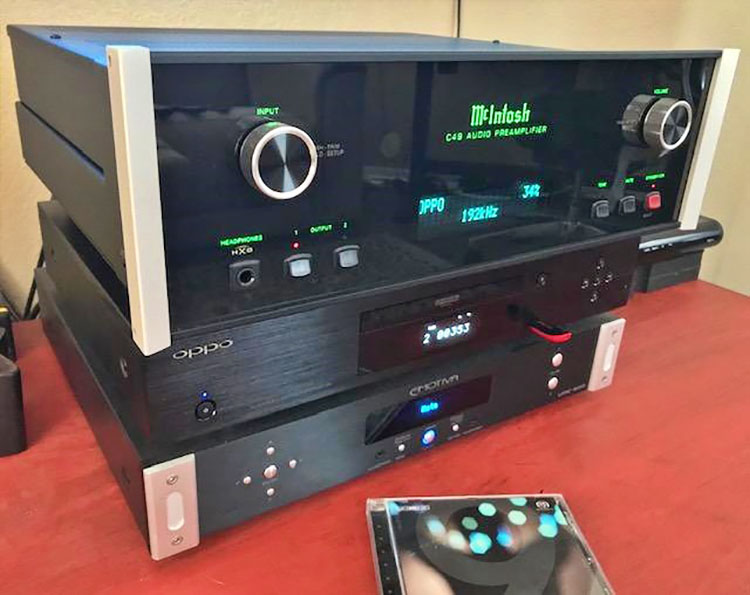 I was anxious to listen to DSD content, but first I had to find some samples on the internet. Fortunately, I discovered several sites that offer free content and many that offer downloads for a fee. 2L and Blue Coast Records gave me some tasty snippets at different sample rates to download for free. This was all a bit new to me and of course, one thing leads to another, and now I am listening to Qobuz and enjoying all sorts of music in high resolution, and loving it! But I digress… 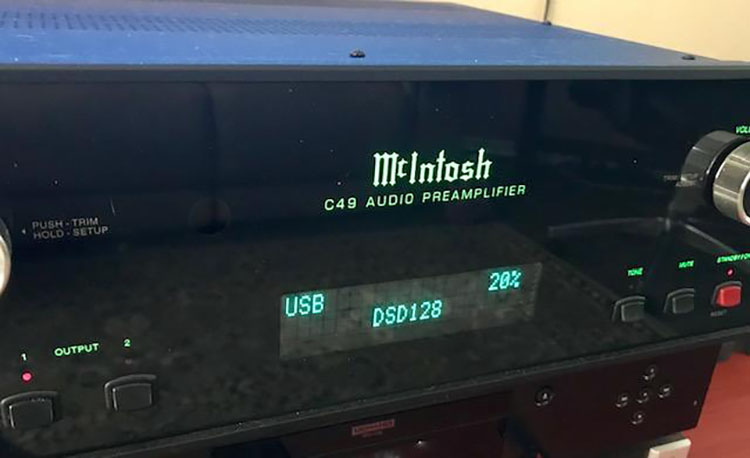 There is a downside to this. Mainly, over time you get used to what you have. You’ve probably had the same audio gear for years and are generally happy with the sound quality. Then something like the McIntosh C49 shows up and the improved sound quality really makes you sit up and pay attention. I know I should not be surprised that it sounds better; it costs 10x what my UMC-200 does. But once bitten, it’s hard to go back. It’s not just because I was listening to pure DSD, even my CD collection sounded so much fuller and real. Better detail, better soundstage, better coherence, with a lush “live” feel to it. I was enjoying some CDs that were less than ideally recorded, too. Mind you, McIntosh offers an upgraded DA1 to the DA2 module, which is supposed to be even better, but the DA1 module is no slouch. 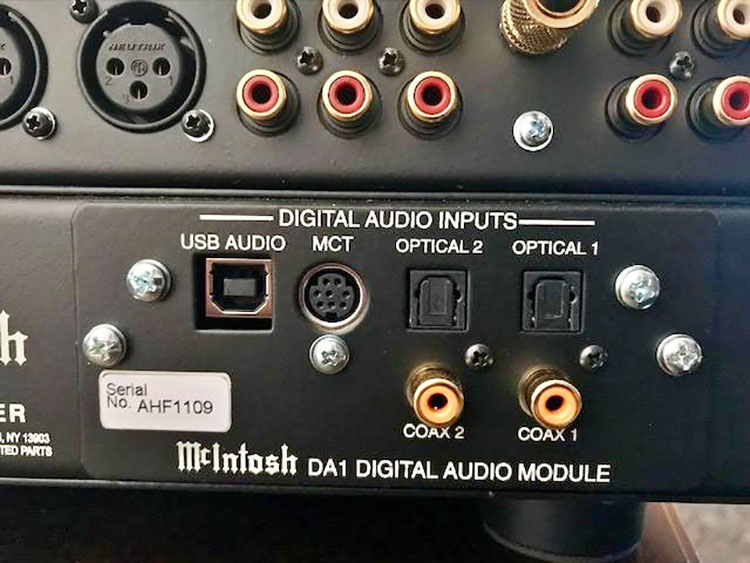 My music evaluation begins with a DSD128 (DSD over PCM at 352.8kHz) of Jan Gunnar Hoff playing The Elder on a closely mic’d piano (2L). The sound of the piano was realistic and had a rich resonance like you’d hear when leaning on a piano in a concert hall. The natural sound was mesmerizing and really made you settle in and relax. Capturing a concert grand piano is a good test for a speaker because it will test the dynamic characteristics and timbre that are always present in other instruments. I loved the dead silence during the pauses. It made the notes of the music seem to appear out of the darkness and float peacefully before you. 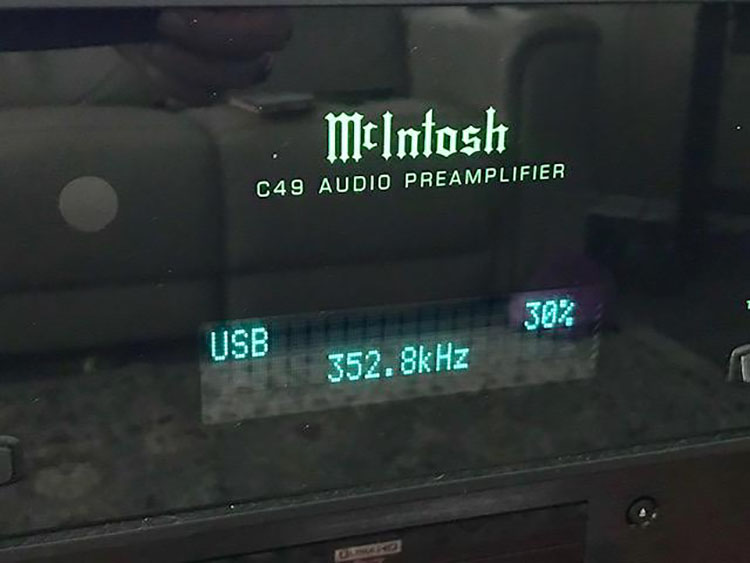 Next up, I chose some familiar music from the Beatles White Album in 24/96 from Qobuz. I noticed a solid bass line in Ob-la-di, Ob-la-da with nice separation of the instruments and voices. The music sounded warm and natural. It was very easy to close my eyes and just get lost in the music and I never found the sound to fatiguing. 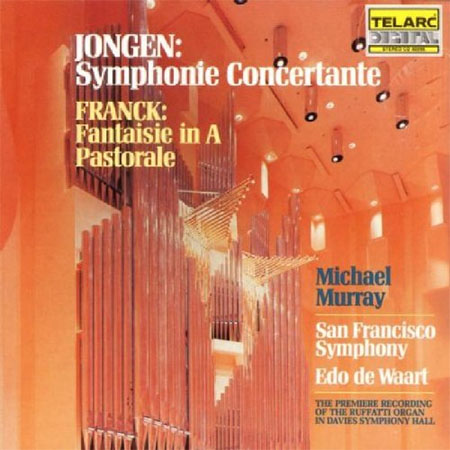 For soundstage and dynamic range, I listened to a Telarc CD of the Joseph Jongen: Symphonie Concertante with Michael Murray on the organ with the San Francisco Symphony under the steady baton of Edo de Waart. This was the premier recording of the Ruffatti organ in Davies Symphony Hall, and what a wonderfully clear and dynamic recording it is!

When the organ comes in after the string intro, it is startling in its size and dynamics. It’s as if the string section was wide, but when Murray comes in, the width and depth suddenly doubles. It’s a very neat effect that put a grin on my face every time I listened to it. 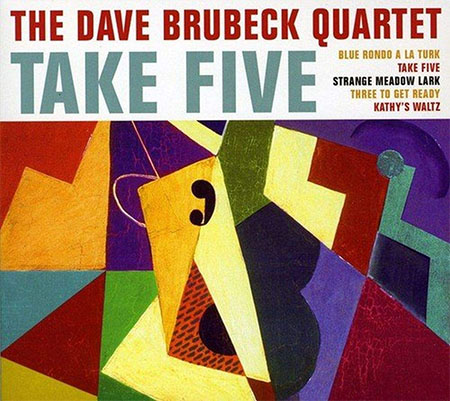 Take Five by the Dave Brubeck Quartet is a jazz classic that presents their experimentation with time signatures and gives you a front row seat to an intimate setting of improv. Again, I noticed an increase in spatial separation of each instrumentalist. The drummer was, ahem, strikingly realistic and you could almost see the drum skins vibrating as they were struck.

I once again heard a natural warmth to their playing without any harshness that can sometimes be present in a digital transfer. 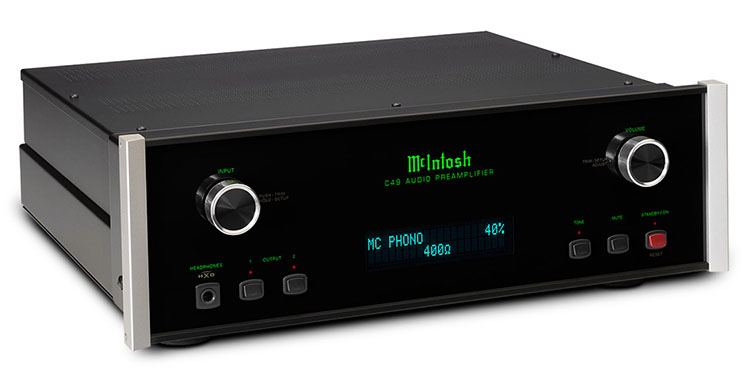 The McIntosh C49 Stereo Preamplifier is an audio component to aspire to. Though expensive at $5000, it ticks all the audiophile boxes and delivers premium sound.

As you can tell, I really liked what the McIntosh C49 did with my music. Whether I was listening to my CD collection or some hi-res, the music sounded much more lush and full of body than my current setup. It was more organic and more real. Is there a downside to this? Yes. I am no longer satisfied with my current pre/pro when it comes to stereo music listening. Now that I have a taste of pure DSD, I am excited to delve deeper into it. I know I shouldn’t have been surprised that my Mcintosh experience was going to be good, but I underestimated how great the difference would be. It really awoke that passion I had back in my early college days when the hi-fi experience was new and wonderful. But isn’t that the thing that makes our hobby so fascinating? Finding out there are things out there that can change your perspective, even after years of being set in your old comfortable listening habits.

I would have been happy to purchase the McIntosh C49. Even my wife commented that she loved the way it sounded, and we spent many an evening exploring music together on the couch. I had time to contemplate what made my music sound this much better. Was it the DA1 DAC module? How much better was the DA2? Was it just the quality of the parts inside and the incredible attention to design and detail? Likely, it was all of the above. The McIntosh C49 is built to last a lifetime and is now more future-proof with its new modular design. Like Harley-Davidson, there is a mystique to owning McIntosh. They may not be for the beginner audiophile, but they are worth climbing the mountain for. Me? I’m back to my climbing, thanks in no small part to my time with the McIntosh C49 Stereo Preamplifier. Thank you for that, gentlemen.