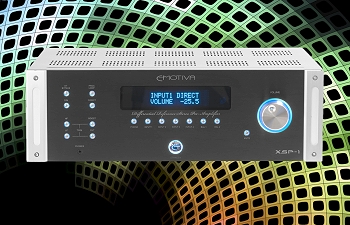 Balanced connections are popping up on more and more audio products these days. But it only really counts when the internal circuitry is fully balanced, which is the case for the Emotiva XSP-1 stereo preamplifier, all for less than $1,000. And, the bench tests show it to be a hot performer. It even comes with an RIAA phono stage that accepts MC as well as MM cartridge input signals.

Having a fully-balanced circuit means essentially that there are two complete preamplifier circuits from input to output. The difference between the two circuits is that one is inverted with respect to the other. Each circuit is referenced to ground. At the output, the signal from one circuit is re-inverted and added to the other, giving you not only a 6 dB increase in output compared to a single-ended design, but common mode rejection, which means that any electrical interference that is picked up along the circuit is cancelled out when the two signals are added together.

The XSP-1 may be only $899, but it looks much more expensive, and let’s face it, we like to have an expensive-looking rig on the A/V rack.

The front panel has a vertical set of buttons on the left hand side, which include an HT Bypass (signal goes direct from input to output), a buton for turning the Processor Loop (for recording) on or off, and buttons for activating high frequency tone control (± 3 dB) and low frequency tone control (± 3 dB) These are called the “Trims”. There is a headphone output at the bottom of these buttons.

In the middle is a row of buttons that select the input, with the Standby Power On/Off button below them. On the right is a Mute button and the Volume Control.

The rear panel is shown below. It looks almost like an SSP rather than a stereo preamp, which is due to myriad connections. Inputs 1 and 2 are stereo XLR or RCA, a set of XLR or RCA Home Theater Inputs, which includes left and right, but also a subwoofer (line-level). This is the set of inputs that are bypassed by selecting HT Bypass on the front panel. If you use the RCA input jacks on the Input 1 pair, you select Input 1 on the front. If you use the XLR jacks on the Input 1 pair, then you select Bal 1 on the front. This eliminates the need for the often seen slider switch on the rear panel to select RCA unbalanced or XLR balanced inputs.

At the top left are Inputs 1 and 2, the Processor Loop inputs and outputs, and the inputs for the RIAA phono. Surprisingly, even at this low price, the phono preamp allows the selection of an impedance load value for MC cartridges. On the right hand side are the XLR and RCA outputs, which can be configured as full range, or using the small dials at the top, you can split the output signal for each channel so that there is high-pass and low-pass for each channel, with the crossover variable between 50 Hz and 250 Hz. Obviously, this would be used if you wanted to have one or two (stereo) subwoofers in the kit. This concept has good news and bad news. The good news is that setting up a subwoofer (or two) will make much more efficient use of the power amplifiers driving the mains, as the speakers will not be wasting energy on frequencies that they cannot reproduce. The bad news is that there will be some phase shift near the crossover frequency. Anyway, it’s there. Try it out. I love stereo subs in a two-channel system. On the far right are the trigger ports, grounded AC receptacle, and main power toggle. Note that the trims and high-pass/low-pass features are performed totally in the analog domain. No A/D – D/A involved. 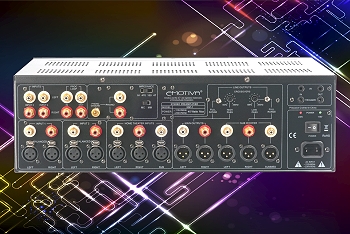 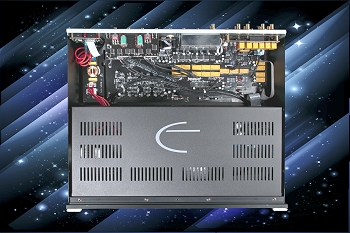 The remote control is metal, with the battery compartment accessible by removing six Phillips-Head screws. The buttons push in solidly with a click, almost like your PC keyboard. There is no backlighting though, and most of the buttons have the same shape, so you just need to learn where each of your most-used buttons are located. 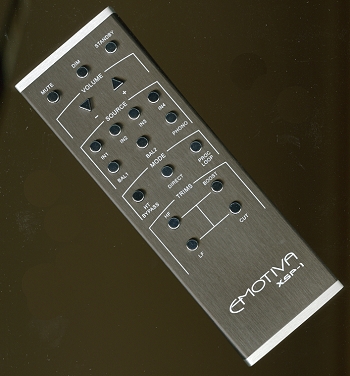 I tested the Emotiva XSP-1 with an OPPO BDP-105, Emotiva XPR-1 1,000 watt monoblock power amplifiers (reviewed here, and they are terrific), and Carver Mark IV ribbon speakers. Cables were Emotiva and Wireworld. All connections used XLR.

First of all, I should say that the XSP-1 sounded amazing, even without the also amazing price. If I had been given a presentation not knowing what the preamp was, I would have guessed, by the sound quality, that it was much more expensive. The amount of detail, the neutrality, lack of background noise, everything about it said, “$$$$$”. Fortunately for all of us, it is $.

Beethoven may be most famous for his Symphony No. 5, but the library of his compositions is immense, including sonatas, concertos, symphonies, all kinds of things, and much of it when he was stone deaf. Apparently, at that point, when he conducted his pieces, the orchestra didn’t look at him. Notwithstanding all of his works, one of my favorites is his Symphony No. 9 in D minor, especially IV: Presto; Allegro assai (Sony LC-00316  DSD). The XSP-1 felt right at home with this sometimes thunderous symphonic masterpiece. Of course, with the XPR-1 monoblocks in the system, I cranked it up. I saw the wall AC voltage drop here and there, indicating that the power amps were doing their thing with a lot of current, and the preamp gave me everything I could ask for, particularly detail in the stringed instruments that go mushy when there is significant IM (wait until you see the bench tests). 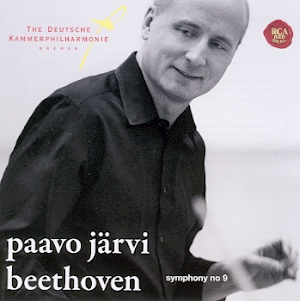 Classical piano is also on my love-list, and I found this disc that has high definition video taken from the 35mm film shot during the playing, and PCM stereo (EuroArts 8-80242-66094-7). The disc has Mozart’s Last 8 Piano Concertos, with Daniel Barenboim not only playing, but conducting at the same time! You already know that I loved the Emotiva XPR-1 monoblocks, but with the Emotiva XSP-1 in the mix, well, it was nice to have all that dopamine flooding my brain. Clarity, detail, neutrality, and as a result, very musical and delightful. 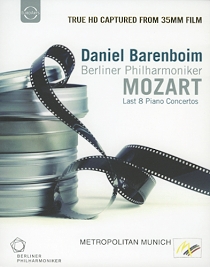 Robert Schumann (1810 – 1856) composed some years after Beethoven and Mozart, and this DSD recording (Channel Classics CCS-SA-28709) has 24 short pieces on it, with names like “Frisch”, “Mit Humor”, and “Wild und lustig”. One of them, “Ungeduldig,” is only 0.42 min. So, you never have time to get bored with the melody, because by the time you might want to pick up the remote control and advance to the next piece, the one you didn’t like is already over. But, I liked them all, and piano is difficult to record, difficult to play (Rachmaninov is notorious for stretching the limits of human hand speed and dexterity), and difficult to reproduce on an audio system. But, reproducing was no problemo for the XSP-1. Even those low 28 Hz notes came through so intensely, I could feel the vibrations in my chest. 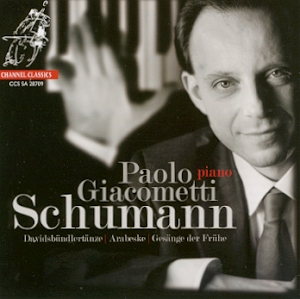 All distortion measurements were within an 80 kHz bandwidth. I used XLR connections for the input signal and output. A load of 100 kOhms was used. The preamp did not produce output with a 600 ohm load, so you should use a power amplifier with an input impedance of at least 10 kOhms.

At 5 volts output, distortion was still astonishing at only 0.0003%.

Using a combination of 19 kHz and 20 kHz test signals, the B-A peak was more than 120 dB below the fundamentals, i.e., inaudible, not to mention barely visible.

And at 5 volts output, the B-A peak was 105 dB below the fundamentals.

At 5 volts output, IMD measured even lower, but not significantly so.

THD+N vs. Frequency at 2 and 5 volts output produced one of the best set of spectra I have ever seen in a preamplifier. Amazing, at any price.

The measured frequency response was essentially flat out to 20 kHz, where it then began a long slow roll-off, ending at – 2 dB at 200 kHz.

I measured two volume settings, one with the input equal to the output (2 volts) and the other with the input at 2 volts and the output at 5 volts. The results are shown below. The best part of the range is between 100 mV and 10 V. Fifteen volts was the maximum output, regardless of the input and volume control settings.

I tested the RIAA accuracy by measuring the frequency response using a pre-emphasis EQ curve compensation file. For the MM setting (“Moving Magnet”), the adherence to the RIAA spec was within ± 0.2 dB.

For the MC setting (“Moving Coil”), the curve showed a bit more deviation, which is to be expected, since there is an additional gain stage in the path. Nevertheless, the response was within ± 0.5 dB of the RIAA spec.

For those of you who want to use the High-Pass/Low-Pass capability of the XSP-1, here are the curves for settings at 50 Hz and 250 Hz. The curves indicate a second-order (12 dB/octave) Linkwitz-Riley crossover design, which is performed in a passive analog circuit (there is no A/D – D/A conversion involved).

Well, what can I say here, but WOW! For $899, you get one heck of a preamplifier. If it were $3,899, I would still say, “WOW”, but I would expect it to drive 600 ohms. This is an indicator of where cost was saved, i.e., the power supply, but as long as you drive power amplifiers of at least 10 kOhms input impedance (the Emotiva XPR-1’s have an input impedance of 100 kOhms), you won’t miss the low impedance drive capability. I am glad the Panama Canal just finished the new, wider canal, that will allow the new wider container ships to pass, because Emotiva will sell a wider container-load of these preamplifiers.