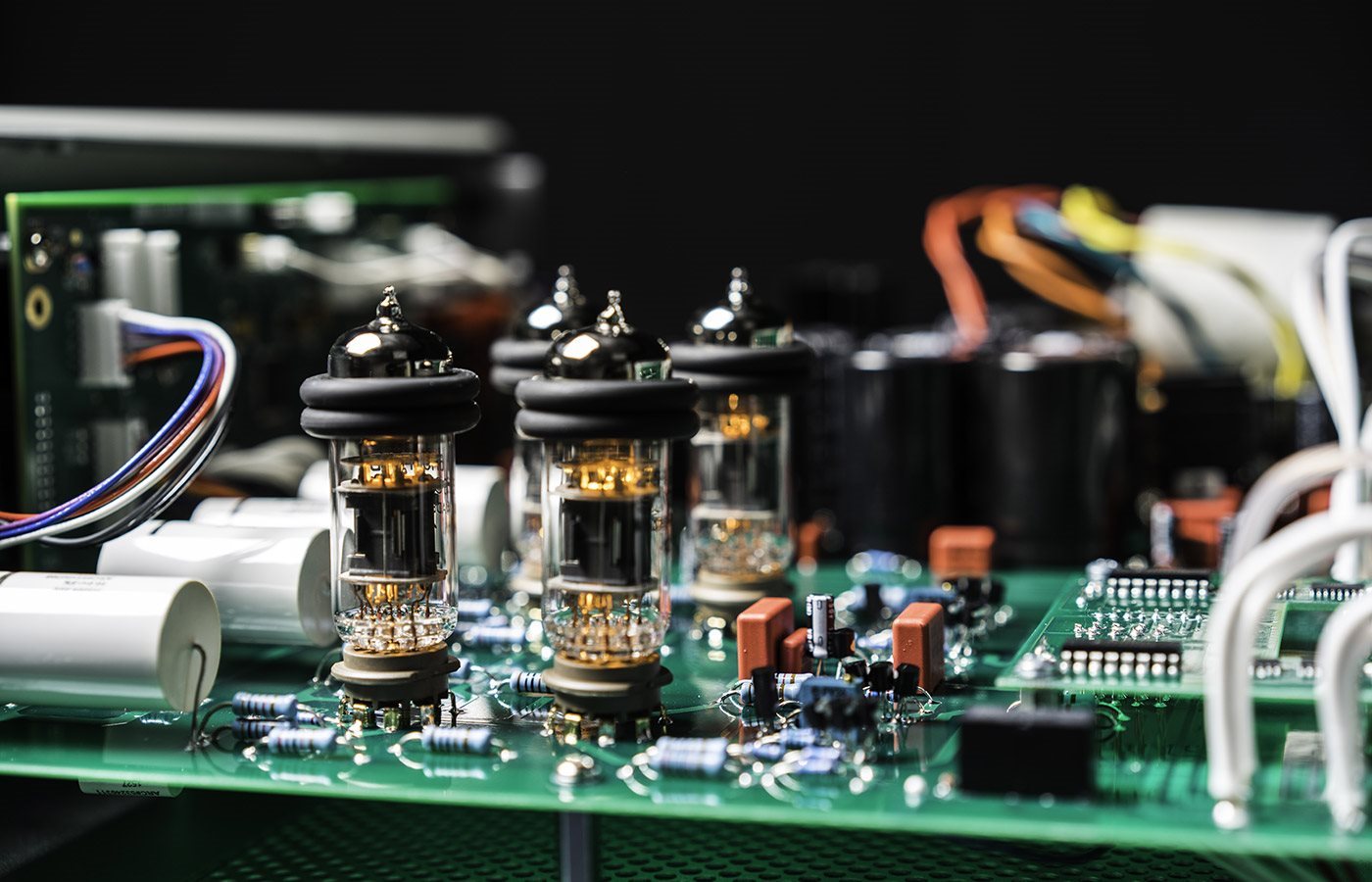 Audio Research as a company is half a century old, founded in 1970 by William Johnson. They are one of the pioneers in hi-fi equipment design.

A lot has changed over the decades, but one thing has not: High Quality.

The LS28 preamplifier, which is the subject of this review, is testimony to that statement. It is a stereo tube component, using four 6H30P dual triodes, biased into Pure Class A.

This preamplifier is far from what existed back in the day. It has the ability to name inputs, display the number of hours the tubes have been used, invert the signal, switch to mono, and other features.

The 6H30P is a (relatively) recent tube, having been imported from Russia. It is a very powerful dual triode, and the LS28 has four of them.

The front panel has a dial on the left hand side that selects the Input and a dial on the right that controls the Volume. Buttons at the bottom center, left to right, are for Power, Menu, Enter (for use with the Menu), Mono/Stereo, Invert (Phase), and Mute. There are two handles for use in sliding the unit in or out of a rack. A vacuum fluorescent display in the center indicates the status.

The LS28 uses four 6H30P dual triodes for signal gain. That’s four triodes for each channel. There is only one gain stage, however. It’s all in Pure Class A bias and with no negative feedback. All of this is to the signal’s advantage.

“Installing” the LS28 involves removing the cover and inserting the four tubes. They arrive packed in foam (see below). 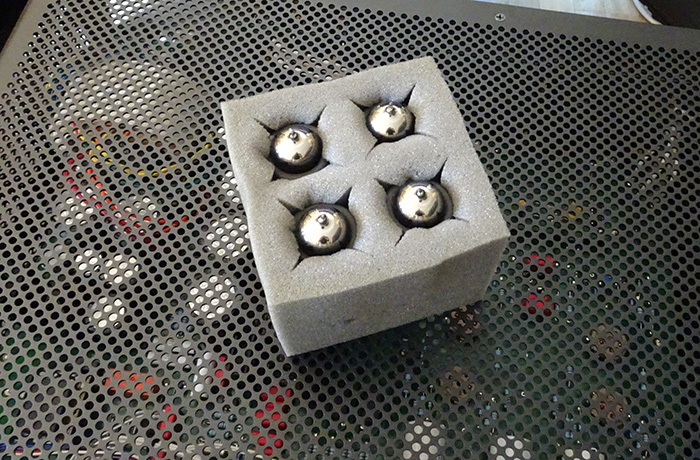 Each tube is marked with one of the following labels: V1, V2, V3, or V4. The tubes are assigned a specific socket that is indicated in the user’s guide. 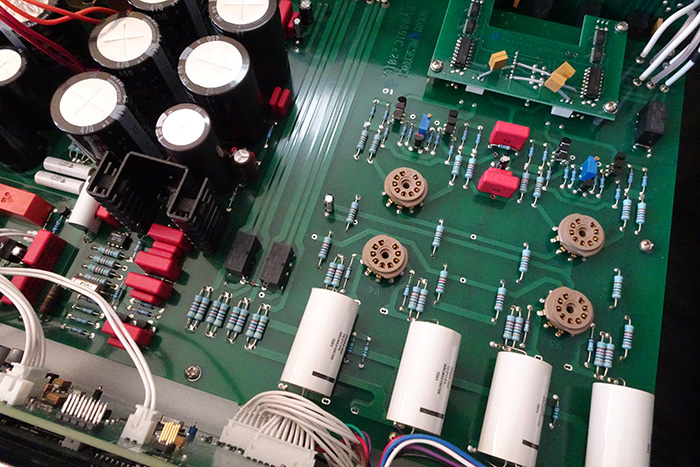 You need to be careful when inserting the tubes into the sockets. Line up the two pins that are separated by the most space as seen in the photo above. Then push the tube down into the socket firmly but gently.

The rubber rings (photo below) that surround the top of the tubes are called “dampers”. Tubes have microphonic characteristics, so are sensitive to sound vibrations. When sound in the listening room reaches the tubes, vibrations of the glass envelope reach the filaments, causing them to also vibrate. This vibration is converted into electrical signal. So, by placing the rubber dampers around the glass envelopes, the vibrations are reduced significantly. 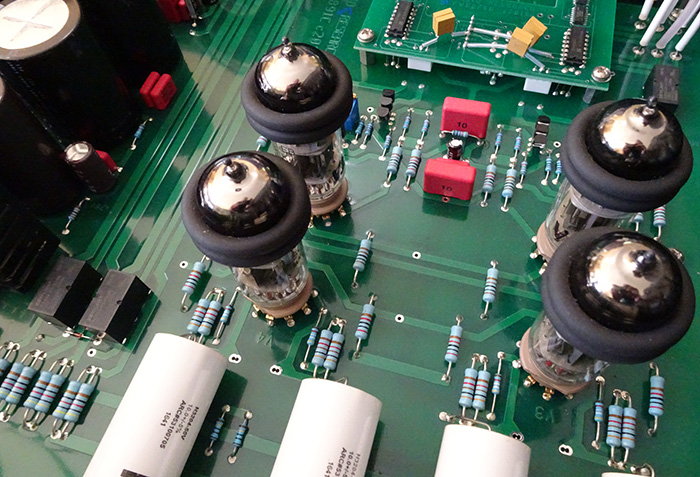 There are four inputs, available as either balanced XLR (the four sets of inputs on the left side – see photo below) or single-ended RCA (the four sets of RCA jacks to the right of the balanced inputs). Besides two sets of XLR and RCA outputs (the jacks to the right of the RCA inputs), there is a set of XLR and RCA Record-Out jacks. The Record-Out is at full voltage (no volume control). There are also some connectors, such as RS232, for external control system use.

When powering on the LS28, it is muted and goes through a warm-up (“Start-Up”) period to heat the tubes. After that point, you need to push the Mute button on the front panel to go into normal operation. The warm-up takes about 45 seconds.

The left-hand rotary knob selects the input, while the right-hand knob adjusts the volume.

By pressing the Menu button, you can access the various features, such as balance between the two channels, display brightness, mono operation, inverting the signal, and determining the number of hours the tubes have been in use. The 6H30P tubes will last approximately 4,000 hours, after which they should be replaced.

You can change the names of the inputs if you wish and also set one of the inputs to unity gain if you want to pass-through the signal to a surround sound processor. 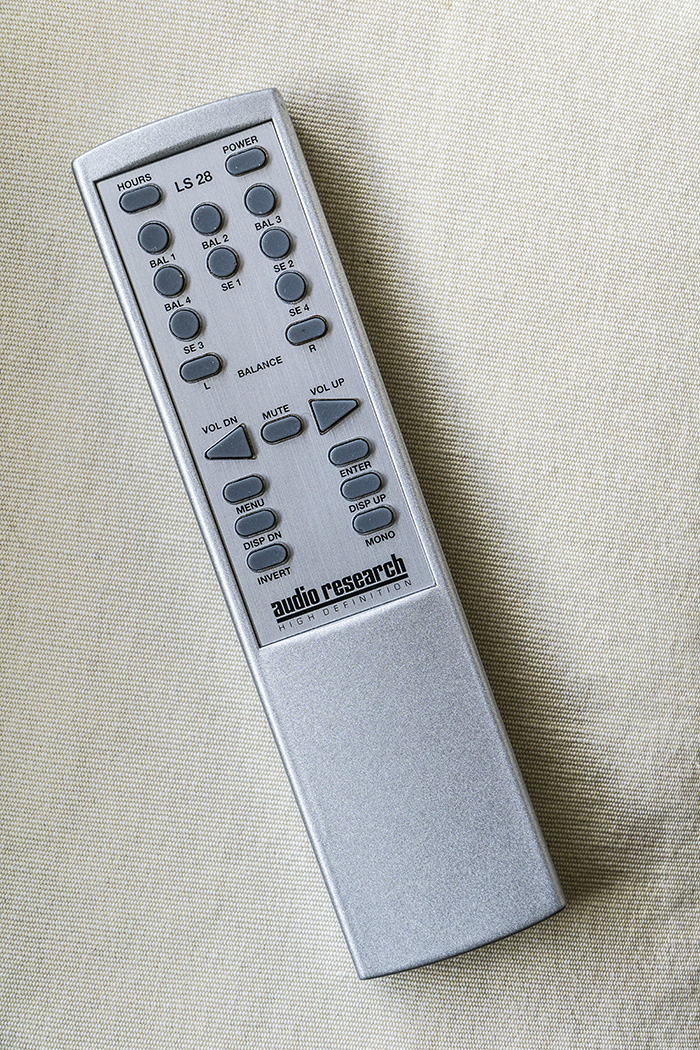 A very nice remote control is included. It appears to have been routed out of a single piece of aluminum, and It can be used to access all of the features of the LS28.

I am a big fan of Baroque classical music, and there is no composer that characterizes this period than J. S. Bach. His Brandenburg Concertos are an excellent example, having been recorded countless times by various orchestras and conductors. This particular one is with the Academy of St Martin-in-the-Fields, conducted by Neville Marriner (Philips B00005LKEJ).

Although Concerto No.1 in F, 1, Allegro might be the most recognizable, I like Concerto No. 3 in G, 3, Allegro the most because of its faster pace. 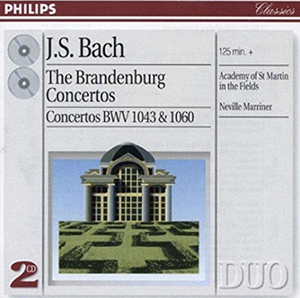 The album is not demanding in terms of dynamics, and perhaps that is one reason I like Baroque music so much. It is great for relaxing. However, clarity and detail are a different matter, and the LS28 excels here. This is a result of the Class A bias. To remind you what Class A is, it means the output is fully on at all times, and the particular voltage and current are delivered as needed, with the rest of the output being dissipated as heat. It is inefficient to be sure because power is being wasted, but the resulting sound is worth it. 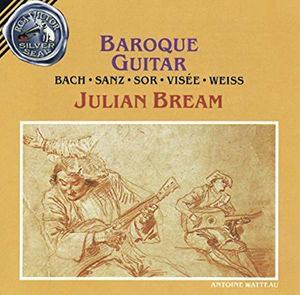 Guitar represents a good test for transients because when a string is plucked, the leading edge of the sound is very intense.

I thoroughly enjoyed listening to this album by Julian Bream entitled Baroque Guitar (Sony Classical B000003F1J). The attack at the leading edge of plucked notes was as good as it gets. Of course, if just analyzed the sound, I would not enjoy the music, so after I determined the quality of reproduction, I sat back and listened. This is really a good album, and it paired nicely with such a fine preamplifier. 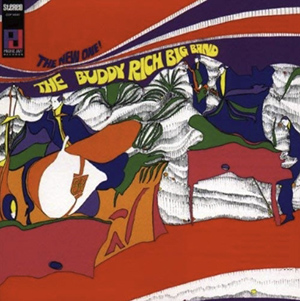 Buddy Rich “The New One”

This album, Buddy Rich, The New One (Pacific Jazz B009Z1W6L6) is one of his best. In particular, the first track, “Away We Go”, is just incredible. No lack of dynamics here. In fact, it is a tremendous test of any audio component, from the trumpet solo to Buddy’s drum solo at the end. Explosive is a good description. I think my electric bill took a big jump, but it was worth it. What a fabulous musician he was. The LS28 did a great job of reproducing the entire jazz orchestra.

I moved the LS28 into one of my other listening rooms where there is a turntable (VPI-HR-X with Sumiko Blackbird Cartridge), Pass Labs Xs Phono Preamplifier, Pass Labs Xs 300 Power Amplifiers, and MartinLogan CLX Full-range Electrostatic Speakers. 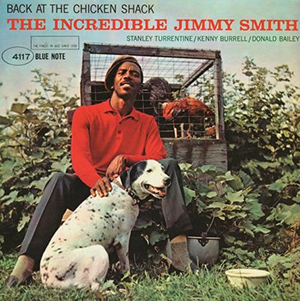 Jimmy Smith “Back at the Chicken Shack”

Jimmy Smith was a jazz organist back in the day. This album, Back at the Chicken Shack (Blue Note 4117, UPC 753088411779), is typical of his extraordinary talent. He played a Hammond B3 with a Leslie speaker. The speaker drivers rotated, which delivered an amazing vibrato sound that was truly three-dimensional. The LS28 gave a sound that is very rich with even-ordered harmonics, and this made for an extremely enjoyable listening experience. 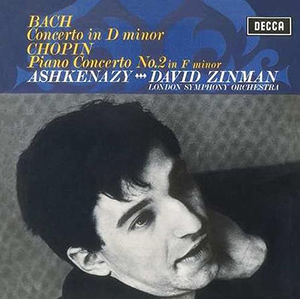 Bach is about as far from jazz as one can get, and yet, just as beautiful. His Concerto in D Minor (Decca 028948322527) with Vladimir Ashkenazy at the keyboard and David Zinman conducting the London Symphony Orchestra is a perfect example. Even though this music goes back nearly 60 years, everyone will recognize this musician’s and conductor’s names. Turntable manufacturers are telling me that sales of their products have doubled in the last year. Albums like this one are the reason. Clarity and detail are very important, and the LS28 presented them both with aplomb. 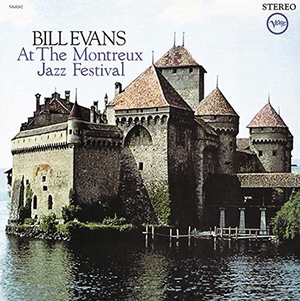 Bill Evans was a well-known jazz pianist. In this album, At the Montreux Jazz Festival (Analog Productions – Verve 753088876219), he joins Eddie Gomez on bass and Jack DeJohnette on drums. It’s a wonderful album, and it won the 1969 Grammy for Best Jazz Instrumental Album, Individual or Group. The excellent remastering from the original analog tapes makes a difference that can be heard with the LS28 in the signal path. Evans’ piano is amazing, and Gomez’ bass on “Embraceable You” has the transients and rich tonality that only a preamplifier like the LS28 can give.

With a 1 kHz input test signal and 2 volts output (tests were made using balanced XLR input and output with a 100 kOhm load except where noted), distortion was low at 0.008%. The second-ordered harmonic was the predominant distortion peak, and this gave a rich, warm character to the sound. 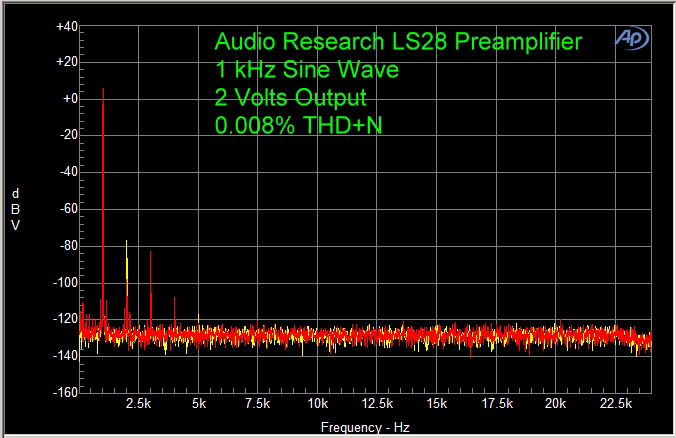 If the output is increased to 5 volts, the distortion rises to 0.026%, which is still respectable. The majority of the distortion consists of the second and third-ordered harmonics. A very small amount of IM (- 110 dBV) is also present. 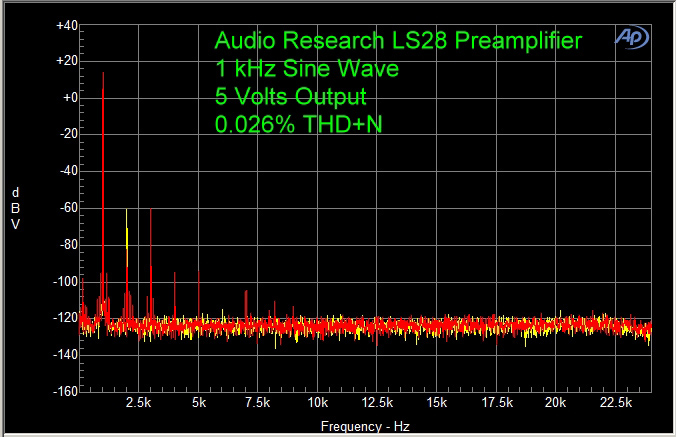 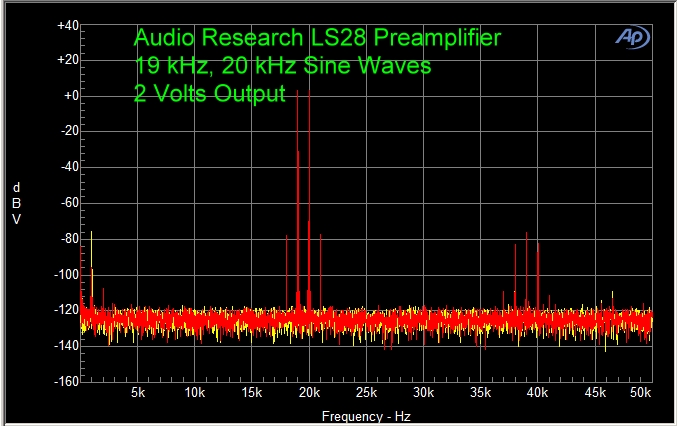 Increasing the output to 5 volts, the IM peaks also increase in amount, but it is still reasonable. Most of the time, only about 0.5 volt – 1 volt output would be needed to drive your power amplifier. Some high-powered amplifiers (e.g., 1,000 watts RMS) might require 5 volts to drive them to full output, but that would only be for short transients. 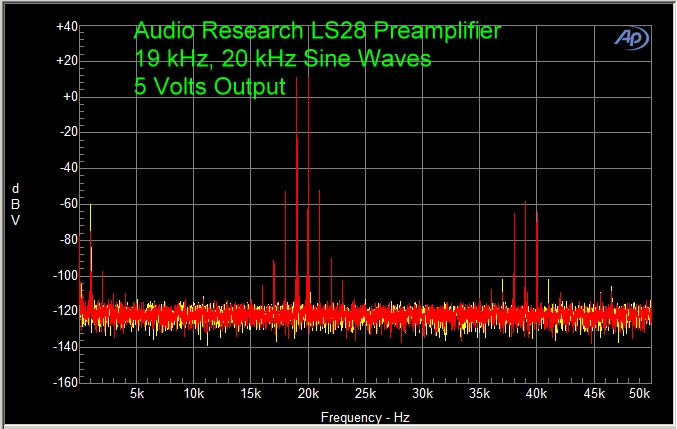 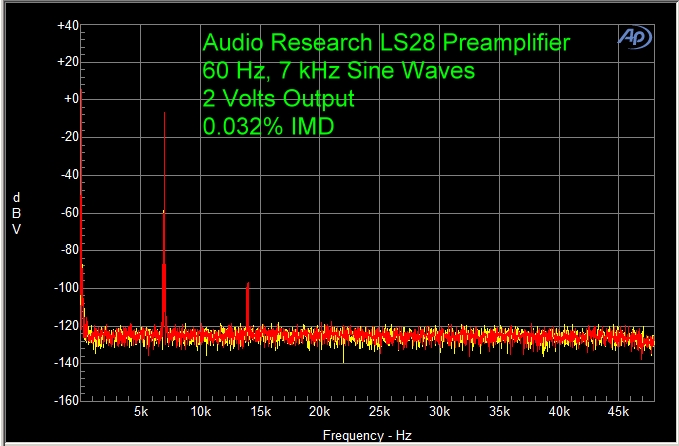 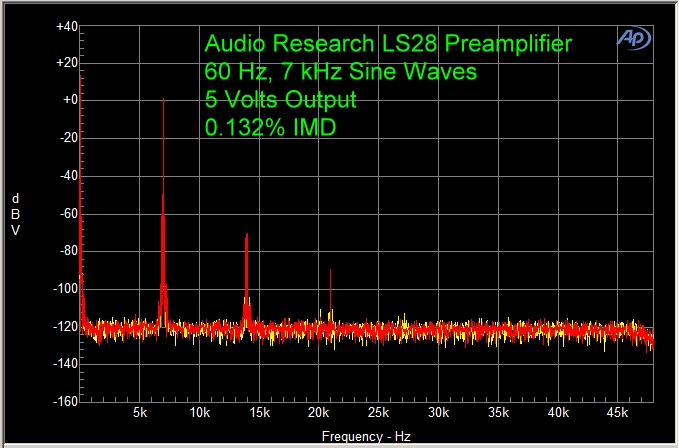 THD+N vs. Frequency yields the following graph. It always stays below 0.08%. The two channels are slightly different, but that is just the way tubes behave. Because the tube is electro-mechanical (filament, grid, plate), and because the tube gets hot during use, performance is slightly variable from tube to tube. These small differences are only measurable on a spectrum analyzer. They are not audible. 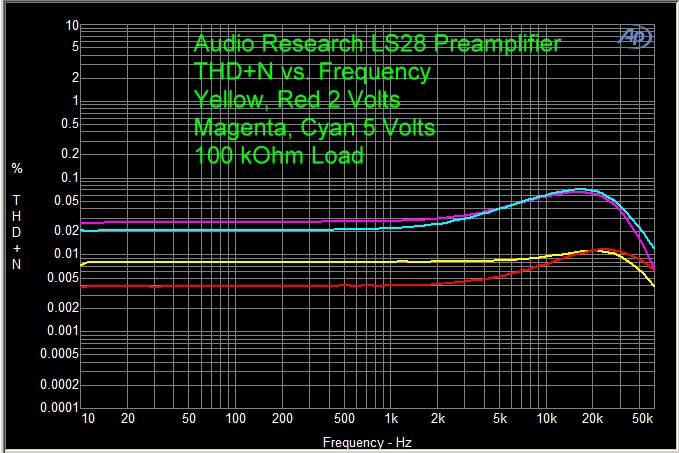 THD+N vs. Output is shown below, with a load of 100 kOhms and 600 Ohms. The volume control was set to 55, which is about midway. You can see that, with a 100 kOhm load, distortion stays below 0.04% through 5 volts output. A 600 Ohm load is only for an academic exam. It does not have a practical value. We just want to see how the component performs under extreme stress, and the LS28 does fine. 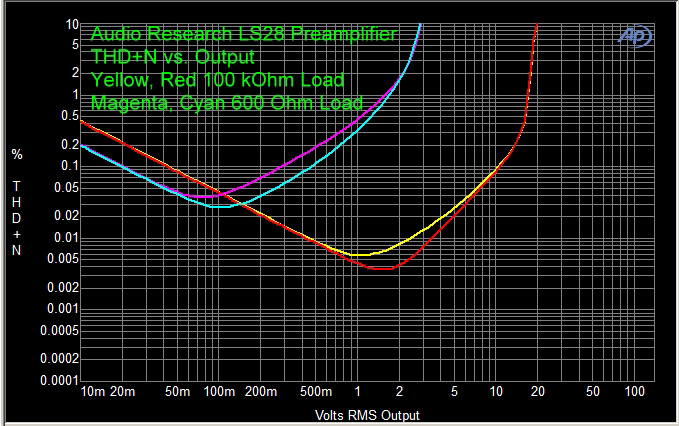 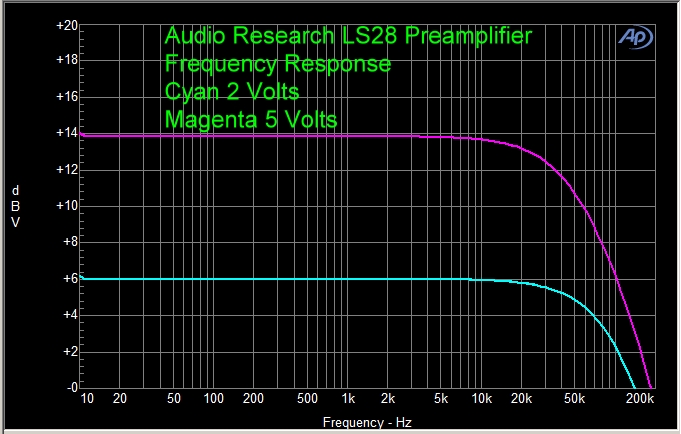 The AUDIO RESEARCH LS28 PREAMPLIFIER is a fine product. It is beautifully constructed and has a warm, lush sound that tubes excel at. I have no reservations about recommending it highly.

*Can’t Think of Anything