Yongki Go, Ph.D.November 24, 2020Power Amplifiers
Home
ReviewsAmplifier ReviewsPower Amplifiers
As the name implies, the A8.350 amplifier from Starke Sound has 8 channels of amplification capable of generating 350 W/channel (into 4-ohm loads).

Starke Sound is a relatively young company based in California (founded in 2009) focusing on producing audio equipment for multi-channel movie and music reproduction at home. The company’s products include speakers, amplifiers, and subwoofers.

The motivation behind the founding of Starke Sound in 2009 was to bring high-performance products for multichannel audio reproduction purposes to the home. Even though the company strives to achieve its goals using the most efficient path, Starke prides itself in making its products unique, be it in the materials used, or through the technologies applied. Since its establishment, the company has successfully developed and offered various products, such as multichannel amplifiers, speakers, and subwoofers, to address the market demands.

There are currently 4 models of power amplifiers offered by Starke Sound. Except for the AD4.320 (Class D based), the rest of the models (A2.640, A7.480, and A8.350) utilizes a Class A+AB design type. The A8.350 amplifier reviewed here has the most channels (8), but interestingly, at $5200, it is the cheapest among the company’s Class A+AB amplifier options.

The A8.350 amplifier sports a modern and uncluttered appearance with its mostly black-finish body panels and chassis. A silver stripe gives the front panel a two-tone accent in an otherwise minimalist front-panel look, occupied only by a power on/standby button and a vertical light indicator. This vertical light illuminates red when the amplifier is on standby and green when the amplifier is in operation. In a dark environment, this red/green glow actually looks cool. On the top cover of the amplifier, an embossed ‘A8’ marking is clearly visible flanked by stripes of ventilation holes. These ventilation holes also extend to the side panels of the amplifier. The A8.350 is biased high into Class A operation, hence it runs warm and needs all these ventilation holes to dissipate a good amount of heat from its internal heatsinks. Although not visible from the outside, the A8.350 is also equipped with 4 internal fans installed on the side heatsinks. 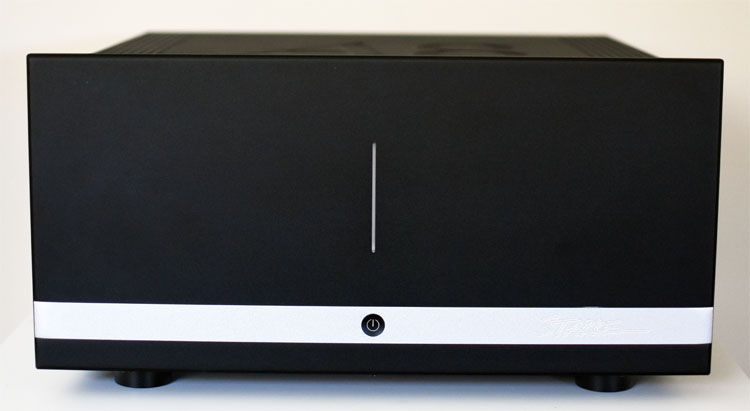 The two large toroidal transformers inside, large heatsinks, and relatively thick chassis/cover are the major contributors to the weight of the amplifier, which is approaching 75 lbs. For an 8-channel amplifier, it is not terribly heavy, but still, you will need two people to lift and move it around comfortably. The overall quality of the amplifier construction is excellent. 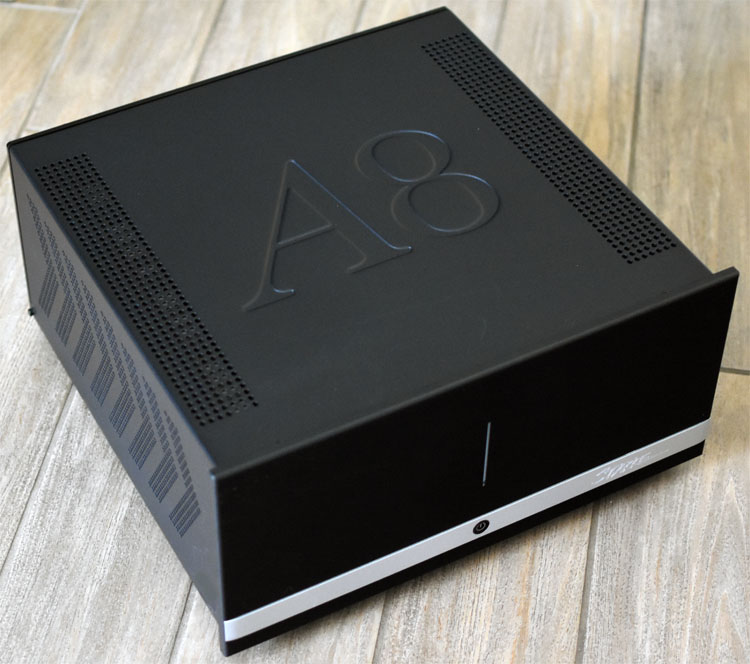 The rear panel of the A8.350 sports the main on/off switch as well as the usual input-output connectors, which are neatly laid out and clearly labeled. Each channel has the same set of connectors, consisting of single-ended and balanced input connectors, a pair of five-way speaker binding posts, and a balanced/unbalanced selector switch. These connectors look sturdy and are of high quality. The speaker binding posts, which were custom made for the amplifier, are made of a beryllium/copper alloy and have a unique appearance. A set of 3.5-mm DC trigger in and out jacks are also provided on the rear panel. 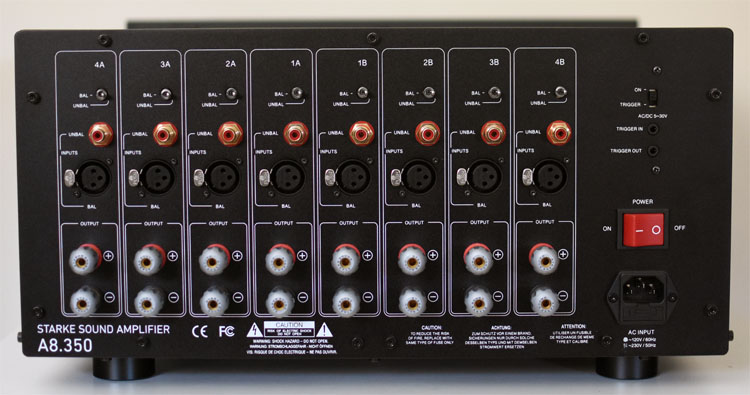 Unlike most multi-channel amplifiers out there, the A8.350 employs a fully-discrete and balanced circuit design all the way through along with a self-biasing system with a very high-class A/AB bias stage. According to the company, such a design provides a remarkably high Signal-to-Noise Ratio (SNR) and ensures the THD remnant to be predominantly even-order. The sonic superiority of Class A type of amplification is well known and the A8.350 amplifier is designed with this in mind while still trying to maintain operational efficiency, hence the Class A+AB design approach. The first 30 Watts of the A8.350 operation are in pure Class A. This means that at typical playback volume levels, the amplifier operates mostly in pure Class A mode. 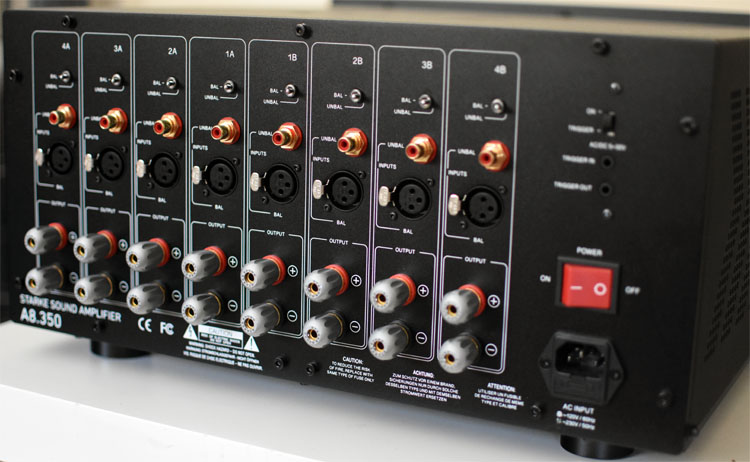 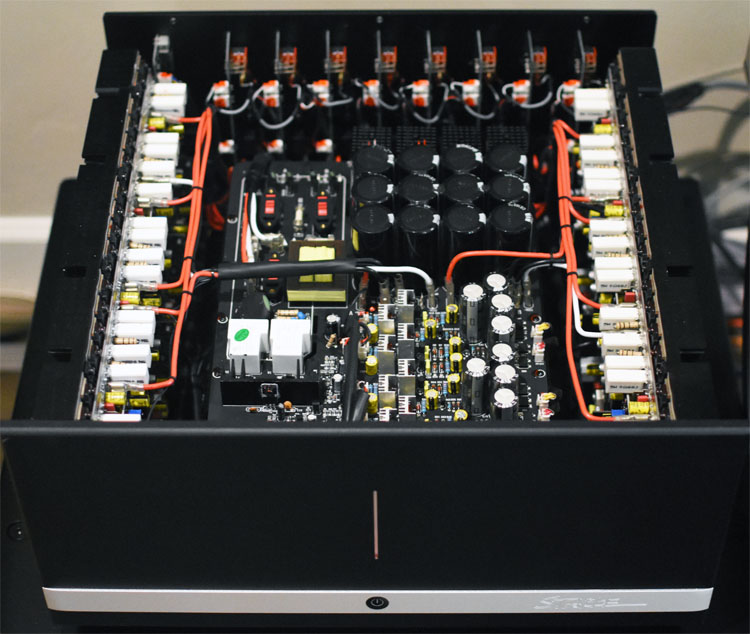 During the review, the Starke Sound A8.350 was inserted in my integrated stereo/home-theater system setup to drive a 7-channel surround speaker setup. The main front left and right speakers were the Revel Ultima Studio speakers, the center channel was the NHT M6, and the surround and surround-back speakers consisted of the NHT SB1 and NHT Absolute Wall speakers, respectively. The front-end components feeding the A8.350 amplifier were the Classe CP-500 stereo preamplifier and Marantz AV8802 surround processor. The source components utilized in this review were Auralic Aries G1 network streamer, Oppo UDP-203 player, and PS Audio PerfectWave DAC II. No subwoofer was used during the evaluation, mainly to better examine the bass response characteristics of the amplifier. 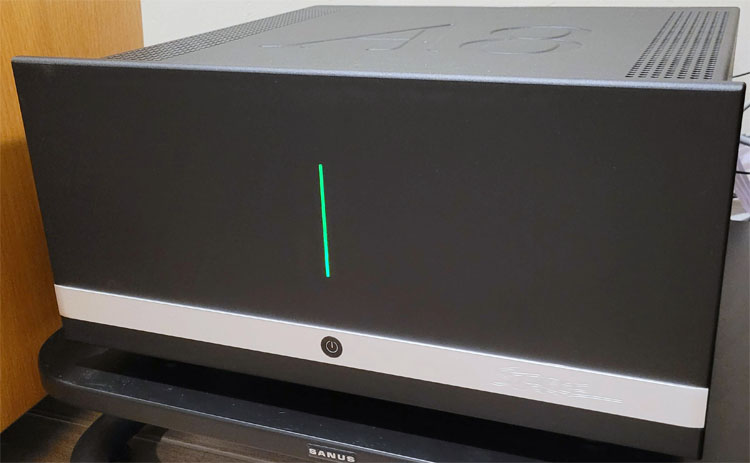 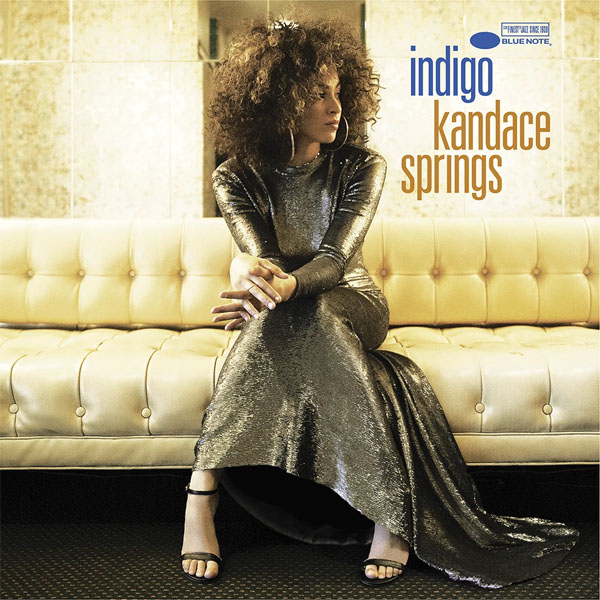 Kandace Springs, Indigo, (2018)
I always find it easier to get a sense of the sonic characteristics of an amplifier, even a multi-channel one like the A8.350, from stereo music applications, and that was how I started my evaluation. Overall, such evaluation revealed that the A8.350 was quite at home for stereo music listening. That it could drive the Ultima Studio speakers, which have moderate impedance loading, to an insanely loud volume level without breaking a sweat was probably of no surprise, judging by its brute-force power delivery specifications.

But brute force aside, the A8.350 possessed smooth sonic traits and was able to reproduce the delicate dynamics in the music I sampled extremely well. These attributes were clearly exhibited through the track Don’t Need the Real Thing by Kandace Springs, from her album Indigo (2018). The A8.350 nimbly surfed through the complex dynamics of the track without losing control of the details in the musical nuance of the track. The attacks in the music were realistically presented in an excellent balance across the frequency spectrum. The bass response of the amplifier through the Ultima Studio sounded extended and punchy with good articulation. The amplifier could image well too, throwing a respectable soundstage with a good sense of space in its overall presentation.

Melissa Manchester, You Gotta Love the Life, (2015)
Although the A8.350 was no slouch in stereo music use, it really shone in surround music applications. The rendition of the DTS 5.1 track, Prayer for the Dying by Seal from the DTS Technology Music Demonstration and Set-Up Disc (1996) through the A8.350 was among the best that I have heard. The music seemed to be delivered effortlessly with an awesome enveloping character that sounded smooth and yet conveyed the texture in the track very well. The track A Touch of Surround Madness in the disc contains a mix of various surround clips that I often use for multichannel testing. The A8.350 did not disappoint, delivering the full impact and energy of the surround material in the track with flying colors. 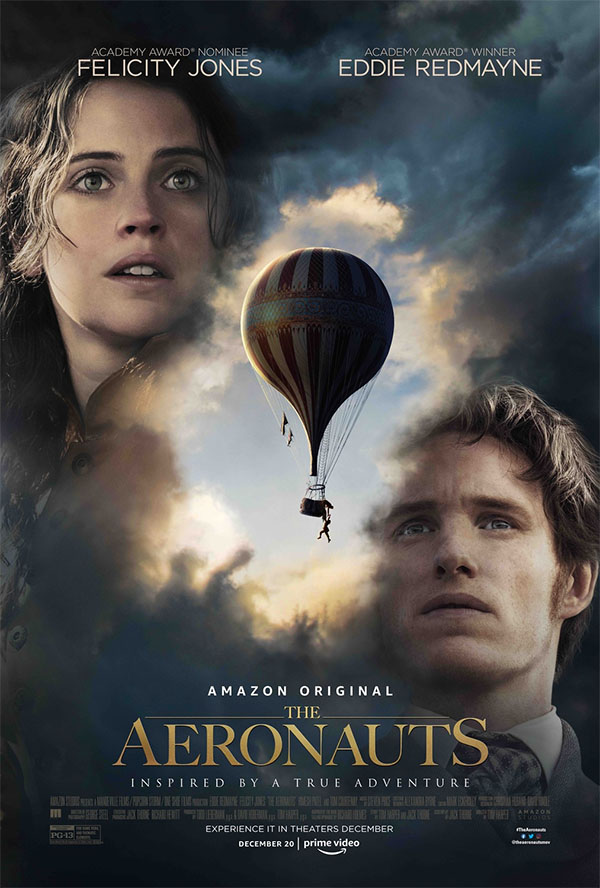 Aeronauts (2019)
The real prowess of the A8.350 was in full display in home-theater applications, where the power and the smooth sonic character of the amplifier really reproduced movie soundtracks in the highest sonic quality. In the movie Aeronauts (2019), the A8.350 showed that it was equally adept in handling delicate scenes as well as the big action set pieces. Dialogue sounded very clear and natural through the A8.350. In complex scenes where the background music and action sequences intertwined, the A8.350 seemed to always have a knack for untangling the various sounds in the track resulting in a clear separation among the sonic elements and avoiding even the slightest sign of muddiness. In the intense scenes, such as when the main characters in the movie were caught in the middle of the storm inside the basket of a hot-air balloon in the sky, the A8.350 did an excellent job conveying the intensity of the scene by delivering dynamic enveloping sound without losing grip on conveying dialogue intelligibly within the scene. 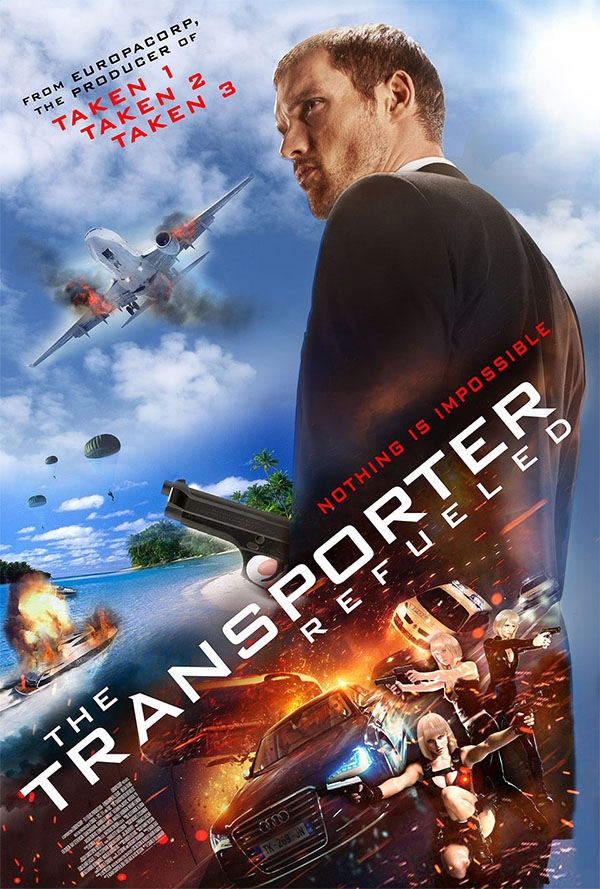 The Transporter Refueled (2015)
A full action movie such as The Transporter Refueled (2015) really allowed the A8.350 to flex its muscles by rendering dynamic and intense action scenes in the movie with aplomb. Even without the subwoofer active, I felt that the A8.350 produced sufficiently impactful bass response through the large main speakers to allow me to get engaged with the ongoing action sequences. The amplifier seemed to always project an effortless impression even when pushed to delivering the movie soundtrack at theatrical volume levels. The Starke amp might become quite warm to the touch, due to its high-biased Class A design, but it never lost the sense of effortlessness in its sound delivery.

As indicated above, the A8.350 was a very capable multi-channel amplifier that had impressed me a lot with its sonic reproduction. My only quibble on the amplifier was on the faint noise that the cooling fans inside the amplifier generated. It was not loud by any means, and most of the time it did not bother me as it was mostly masked by whatever I was listening to, but it could occasionally be heard during soft and quiet passages from my listening position at about 9-10 ft away from the amplifier. However, it did not detract from my enjoyment of the great overall sonic performance of the amplifier. Moreover, this should not be an issue if the amplifier is installed away from the listening position or in a separate room, such as rack-mounting in an alcove, like in most dedicated home-theater room setups.

The Starke Sound A8.350 is a big, bold, and powerful high-performance 8-channel amplifier that has the versatility to deliver high-fidelity sonic reproduction in music and home-theater applications.

The fact that the Starke Sound A8.350 amplifier provides a generous amount of 8-channel high-quality amplification to power your music and home-theater system easily justifies its asking price. On the surface, the amplifier design looks bold and it is well constructed overall. On the inside, the A8.350 is a hefty amplifier that not only packs a lot of power but also exhibits finesse with sonic characteristics that anchor its strong performance with both music and movies extremely well. If your setup can deal with or mask the slight cooling-fan noise that the amplifier generates, I strongly recommend auditioning this amplifier to fill your high-end multi-channel amplifier needs.