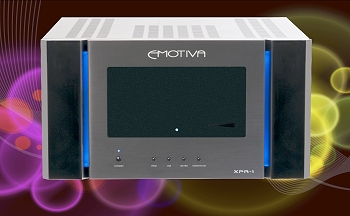 Emotiva continues to amaze everyone, whether they purchase Emotiva products or not, with the quality they can provide to consumers at very affordable prices.

As you will see in this review, the XPR-1 extends that reputation.

The XPR-1 is a fully-balanced (from input to output) design, with a power supply that has a 2.5 kVA toroidal power supply transformer and 240,000 ?F of capacitance.

The front panel is very attractive, with two vertical slots that emit a blue light. From the left, are a standby button (main on/off toggle is on the rear panel), then Peak, Dim, Meter, and Orientation buttons. These all have to do with the viewing of the power meter which is a series of LEDs that can be set (oriented) to move from bottom to top, left to right, or right to left, indicating the amount of power that is being delivered. You can also dim the LEDs and turn off the panel lights altogether. Many consumers don’t like their equipment rack to have visible lighting, but I like them a lot. For my use, I set the LEDs to move from bottom to top. The bottom of the LED column is located where the white dot is in the photograph.

The rear panel is at the absolute other end of the scale in terms of connectors, compared to a receiver or processor. The RCA unbalanced and XLR balanced input is selected (one or the other but not both at the same time) with a toggle switch. Underneath the inputs are a massive set of brass binding posts that will take just about any cable termination you can think of. Then, at the bottom, is the main power on/off rocker switch, and a 20 Amp AC receptacle. You need to prepare for this, because the other end of the included cable will only fit a 20 Amp AC wall socket, where one of the prongs is sideways oriented rather than vertical. If you purchase the amplifiers, but don’t have that type of socket, they are readily available at Home Depot or other electrical supply stores. There is also a pair of trigger jacks, for automatically turning on the power amplifier(s) when you turn on your preamp or processor (which would need to have the appropriate output trigger jack). 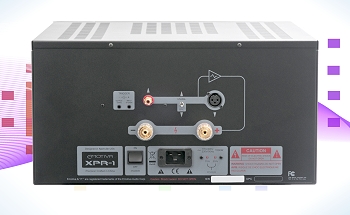 If you look inside the chassis, shown below, you can see 24 power supply capacitors and the 2.5 kVA toroidal transformer. This power supply is massive! And that is the basis of any good power amplifier. Each rail has 18 output devices (bipolar transistors), for a total of 36 (having a large number of output devices is also necessary for a good, high powered amplifier). 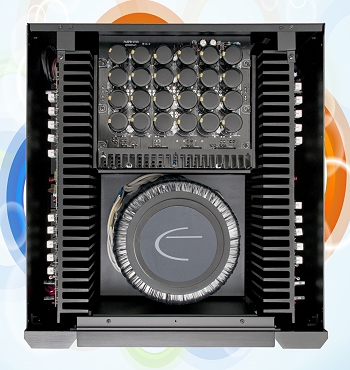 As further illustration, here is a diagram of the two basic types of bipolar transistors, PNP and NPN.

Other features of the XPR-1 include soft start (to limit in-rush of current to the power supply) and protection circuits in the case of a fault (e.g., shorting the outputs).

The amplifier runs in Class H, meaning that the voltage rails are modulated so that they stay a few volts above the output signal demand.

For these amplifiers, I used my big Carver Mark IV ribbon speakers. Also in the setup were an OPPO BDP-105 universal player and a Pass Labs XP-20 preamplifier. Cables were Wireworld.

Although you might not realize it, when the hammers strike the strings of a piano, there are very intense transients, and even if you are listening at medium overall volume, a high overhead capability in the amplifier makes a big difference in the sound.

For example, in Daniel Barenboim’s interpretations of the Chopin Piano Concertos (Arthaus Music), the amplifier must not only reproduce the piano’s transients, but keep them distinct from the supporting orchestra. The Emotiva XPR-1 did this easily, because the average output was about 20 watts, and this allowed transients of 200 watts or more, which are well within the linear part of the amplifier’s response. I never saw the power meters go all the way to the top, which means I always had additional head room. 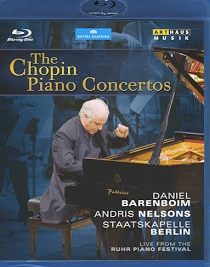 Rachmaninov represents an entirely different challenge, not only in the complexity and difficulty for the pianist, but the dynamics. His Concerto No. 2, “Movement 3: Allegro scherzando” (Surround Records 6-43157-40010-3) has one of those melodies that keeps playing in my head long after the listening is over. From f to ffff, the sound quality never waivered from start to finish. 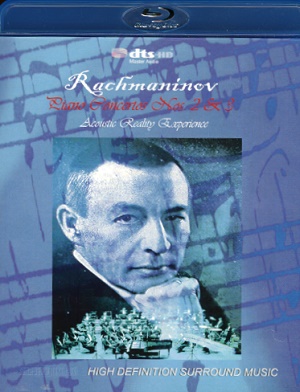 The violin is another instrument that is difficult for a sound system to handle. This von Karajan Memorial Concert recording contains Beethoven’s Concerto for Violin and Orchestra in D Major, with Anne-Sophie Mutter as the soloist. If there were significant IM distortion, her placement on the soundstage would have been indistinct, and the strings in their lower register would have been harsh. Such was not the case with the XPR-1 in the system. Even her highest notes were clean, detailed, yet crisp on the attack. 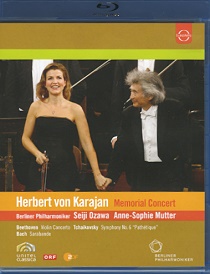 I listened to many of my SACDs in stereo, including some late re-issues of classic jazz, and I have to say that for $1,500, the XPR-1 is a sweet deal. Its sound is neutral and packed with massive power.

All distortion measurements were made within an 80 kHz bandwidth. I used the XLR input for the test signals generated by an Audio Precision 2722. Except where indicated, the output of the XPR-1 was connected to a Carver Mark IV speaker.

At 1 kHz, distortion was extremely low.

IMD was also quite low, which means fine detail in the music will come through clearly.

THD+N vs. Frequency showed that for most of the audible range, distortion stayed at about 0.002%.

Here is the Impedance/Phase plot for the Carver speaker.

High power, high build quality, beauty, great sound, and very affordable. Five attributes that every manufacturer strives for. Emotiva achieves them all in the XPR-1.