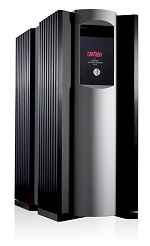 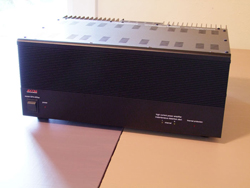 The original ADCOM GFA-555 stereo power amplifier hit the market in 1985. Standby for math calculation. That’s 25 years ago. Enough time for a digital music revolution (maybe peaking now). Enough time for the Rolling Stones to release 11 new records (28 for Neil Young). Enough time for most rock bands to burn out, fade away and then stage a comeback. And, enough time for a hifi manufacturer to come and go as well. Adcom is still going strong though. 25 years after the original version of the GFA-555, they are celebrating one of the best selling bits of hifi kit ever with a special edition. Here, we review the latest iteration fo this classic, called the GFA-555se. 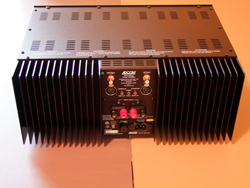 The design is little changed from the original, this is indeed a special version of the original and that’s as it should be. Wouldn’t be a proper tribute otherwise and besides, why mess with success? The features list in the GFA’s owner’s manual lists a few features that I didn’t include in the specifications list above. Namely, precision matched devices used throughout the signal path, custom toroidal power transformer and independent power supplies for each channel. Those last two items tell us that while this amp is not a dual mono design it is nearly so. I’m glad they didn’t go so far as to call it a dual mono design. Some manufactures might have but I’d like to reserve that term for boxes that share only a power cord between the two channels. I’ll admit though that the crosstalk between channels that share only the initial mains transformer should be down in the noise. More important to me is the fact that the rectification and regulation of the power supply is independent in the two channels. The practice of spreading out the power supply regulation is one that I’ve come to look for in the best hifi. One item that I did list in the specifications: 60,000 µF. That is a lot of capacitance at this price point. 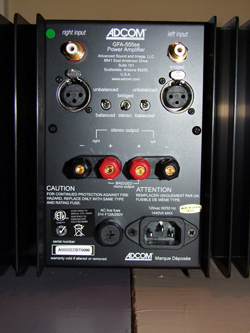 One of the upgrades over the original GFA-555 is the addition of balanced inputs. Selection between the single ended and balanced inputs is via switches (one per channel), on the rear panel. An additional switch is provided to select bridged operation – neatly turning the 555se into a monoblock. This yields more than twice the power per channel (600W into 8 Ohms), not to mention the separate mains transformer mentioned in the paragraph above. Why more than twice the power? When in bridged mode each of the channels ‘helps’ the other to see less impedance. A push/pull type of operation that means that each channel sees half the impedance it would see if operating alone. This imposes some speaker limitations while in bridged mode. The owner’s manual has a thorough discussion on the subject. In short you should not connect the amp to a speaker with any significant impedance dip under 4 ohms. There is no such warning when not in bridged mode but there is an asterisk alongside the power ratings for 4 Ohm loads and Bridged Operation into 8 Ohm loads. At the bottom of the page the asterisk decodes to ‘With supplemental cooling system’. Meaning a fan I suppose. There are pretty hefty heat sinks on the back of the unit but I never noticed them getting beyond mildly warm. I was able to keep a hand on them indefinitely.

What I look for in my hifi these days is separation, space between the instruments. No smearing or smudging. The ADCOM operates above its price point in this arena. I started my critical listening with a stress test –a Spiritualized CD from the tin age of CD mastering, 1997: Ladies and Gentlemen We Are Floating in Space. Even with the massive, wall-of-sound crescendos that this band puts out the amp did an excellent job of keeping the instruments separate if not quite floating in umm… space. Making this CD sound like hifi magic is really not possible though. It has a classic case of digititus. The GFA-555se proved its high power pedigree by revealing the flaws in bad recordings (in this case grain) rather than obscuring them. Some amps (especially tube designs) might put a gloss on that stuff. Fortunately it’s becoming a non-problem with modern CD’s (this particular one was reissued in 2009) and the resurgence of vinyl of course. 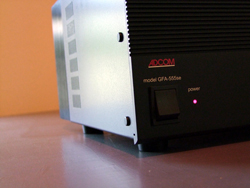 Speaking of vinyl, I recently became aware of Robert Wyatt thanks to a thoughtful birthday gift of his 2010 record. I must not have been the only one as my local record store now has some reissues of his early work. I misread the ratings on allmusic.com thanks to Blackberry but still liked the (only) three star rated Old Rottenhat. Turns out it has some interesting percussion sounds – what exactly I don’t know – someone pounding nails into a stack of boards? It’s hard to say the 555se reproduced it precisely when I don’t know precisely what it should sound like but given that it sounded so good and fit into the song so well I’m gonna call it good. This is illustrative of what this amp does really well, with a tilt to the bright and detailed side of things, percussion of all sorts shines through and is not lost in the mix. These Robert Wyatt records include a CD copy tucked into the sleeve. I played the CD copy of Old Rottenhat after playing the vinyl. This revealing amp clearly showed the difference in the formats, the CD, while better than the compressed/processed/unfortunate Spiritualized record, still had some hash in horns and vocals that I did not pick up while listening to the vinyl version.

An excellent recording, even on CD came through as exactly that with the GFA. The ECM label issues only great recordings it seems and only on CD. Charles Lloyd’s newest is Mirror. The background is jet black. Sax, bass and piano floated out of my Daedalus speakers on the opening track and I didn’t look back or take any other notes. I just listened.

Switching back to vinyl as is my wont. The latest from Antony and the Johnsons is Swanlights. While my particular copy of this record has some nasty pops in the first track, yes that still happens and is a drawback to vinyl. The second track (The Great White Ocean) is a terrific audiophile comparison vehicle. The ADCOM did not disappoint, keeping drums, violins and voice neatly separate and enchanting. The fourth track, “I’m in Love” has some hand clap style percussion, not actual hand claps unless they’ve been processed somehow, they float delicately over the rest of the music though and the ADCOM served them up like petals. Switching back to my Simaudio W-6’s I heard more details in the vocals – such as the breaths before a line is sung, piano notes seemed to last longer and the lower register especially was more full, cymbals were softer. The soundstage was deeper, I could hear well into the speakers it seemed. I make this comparison mostly because these W-6 monoblocks are what I have, not because anyone should expect the $1,400 dollar GFA to best a pair of monoblocks that cost roughly six times as much when they were new. To my mind the ADCOM held up quite well in the comparison.

I enjoyed a variety of preamps with the GFA-555se. For balanced operation I used my Simaudio P5.3 preamplifier. Unfortunately the 5.3 went back to the factory for an upgrade early in the review process so I didn’t get to listen in balanced mode as much as I would have liked. What I heard was as expected, the noise floor was somewhat lower and the bass was better controlled. For substitute preamps I’ve been relying on Portland’s own Echo Audio, (www.echohifi.com) a new and used hifi shop. They graciously loaned me an Edge Si M1 but only for one weekend. This silky smooth pre could use a better remote but what a great match for the GFA! I bought some Edge gear very early on when they were located in Boulder. The company was called Edge because the design philosophy was to design to a high slew rate. Literally this means the amp is ‘fast’ and the sound is best described that way as well. Paired up with the GFA-555se music had a liquid sound that made me want more. When I returned the Edge the good folks at Echo let me take home a Superphon Revelation III as modded by Stan Warren. This preamplifier could also use a better remote as it has none. It’s somewhat legendary though in used audio and deservedly so, I heard it do nothing wrong and seemingly everything right. Neutral, neutral, neutral is the way I would describe this preamp. 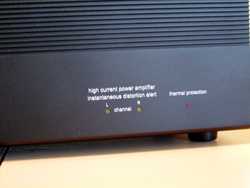 I also had the ADCOM in my home theater setup for a while; there I compared it to the Primaluna Dialogue Two integrated that I still have around. The preamp in this case is my very old but beloved Arcam AV8 and the load was Aperion 632’s. What I heard here was mostly the difference between a good tube amp and a good solid state amp. The Aperion’s smoothed any differences at the extremes and so while the Primaluna had tube magic and could draw me in especially with music, the GFA-555se had a snappier presentation that was great for dialogue and made music, especially edgy guitar and percussion, really come to the fore. I think the 555se is a great match for Aperions which need a lot of power. 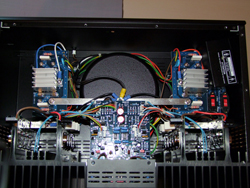 In the realm of power, the GFA-555se has two distortion indicator LEDs (one per channel) on the front. These are designed to give an early warning if you are approaching overload. I never saw a blip from them. As I mentioned above, I periodically sampled the warmth from the large heat sinks on the back of the unit, they never got beyond mildly warm.

The mere fact that ADCOM has been making hifi for over 25 years and that the original GFA-555 was their flagship for so much of that time should be enough to put this amp on the shortlist for those in the market. A classic high power solid state design that can drive any speaker without worry and at the low end of the price range for serious hifi, this amp is a winner.