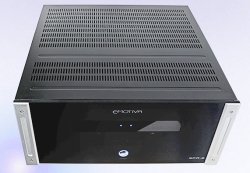 Everyone would like a “good deal” in the world of audio, but there’s usually a lot of skepticism involved because of the tendency for such products to be made with cheaper components and outsourced labor. It’s not unusual for these kinds of cheaper goods to break, in even short periods of time. Well, you get what you pay for. On the other side of the spectrum are very high quality products that come at astronomical prices that, while providing the ultimate experience, are often way out of many consumer’s budgets. Somewhere in the middle of all this though, there are still a few companies that make products that have high performance and are also affordable. Emotiva, over the years, has been one of these companies and they have gained a favorable reputation with audiophiles because of it. Emotiva products are purchased directly from the company using their website, and this approach cuts out the costs of the middleman. They have recently introduced a new line of high powered amplifiers called the XPA series. This line of amplifiers includes the XPA-1, XPA-2, XPA-3, and XPA-5 and they all feature high power output at prices that are far lower than similarly rated products.

The subject for this review is their XPA-2 two-channel amplifier rated at 250 watts into 8 ohms. That’s probably more power than most people would require, but the advantage is that it provides lots of headroom. The end result is that any portions of your media that are meant to be loud, will never lose any of their dynamics, even at high volumes. The XPA-2 lists for $799 but there is currently a holiday special listing the product at $699. That price is incredibly hard to beat, but lets look at the performance.

The XPA-2 is a class A/B design amplifier. Class A amplifiers are desirable by audiophiles because of their linearity but their drawback is that they are inefficient. Even when there is no audio signal sent to them they are still drawing current in almost the same way as when a full signal is present. This makes them very costly because they require massive power supplies and enormous heatsinks to keep them cool while they dissipate heat. Class B amplifiers are a much more efficient design because they amplify only half of the waveform, but as a result have very high levels of distortion which makes them unsuitable for audio uses. Class A/B amplifier offers the trade off solution in that they take advantage of the efficiency of a class B amplifier but also reduce the amounts of distortion in the output.

The XPA-2 is bulky and is also rather heavy at 75 pounds. It just barely fits in my audio rack, and it’s best moved with two people. A lot of its weight is attributed to its hefty heat sink as well as the massive singular power supply that drives both channels. The XPA-2 delivers 250 watts RMS per channel at 8 ohms and will drive 4 ohm speakers at up to 500 watts. if you really need a lot of power, you can max it out at 1000 watts RMS in bridged mode.

The amplifier has good build quality and is all black with silver edges on the right and left sides of the front panel. The front also features a soft blue LED meter that fluctuates with activity and will turn red if the signal starts clipping. You can turn off this light using a switch on the back panel. On the back panel there are connections for balanced and unbalanced input and there are printed labels that guide you when bridging the amplifier. 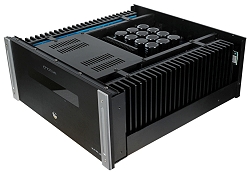 Listening was performed in two channels and I mostly put this amp through its paces with Jazz and Rock styles of music. What I noticed most was, having this much power reserve brought out the full potential of my speakers and allowed them to produce a full range that was rich with dynamics both in low and high frequencies. I was pleased that the bass output from my tower speakers began to rival that of my subwoofer. There was a point where I couldn’t withstand the sonic pressure of turning the volume up anymore so it’s needless to say that this amp will allow you to play your music as loud as you possibly could want. The nice thing is that when the volume goes up, the balance in the frequency ranges remains intact as a result of having enough power reserve to handle it. 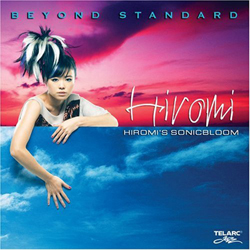 I began my listening with Hiromi’s Beyond Standards Telarc release. This album contains elements of classic jazz supplemented by electronic instruments that give it a truly galactic sound. Here with the XPA-2, the nice thing was, the electronic bass work had great energy and definition andwas separated from the other instruments which made it easy to follow and enjoy. Hiromi is an incredibly fast pianist and the sound on this album was very responsive in this setup. The XPA-2 gave my speakers enough power to keep the piano both percussive and melodic which makes this disc incredibly lively and fun to listen to.

I continued my listening with David Gilmour’s On an Island release. The album is full of ethereal sounds and lively guitar solos accompanied by David Gilmour’s vocal style which many people are familiar with from his work with Pink Floyd.

The first thing I noticed, was that the XPA-2 had dramatically improved the bass output from my usual integrated amplifier setup. The low frequencies never wavered in strength of output and all the kick drum notes had a powerful impact that reached me at my listening spot. What a treat.

I could tell that having all this power not only allowed the speakers to output powerful bass but also gave the midrange an exceptional extension into the soundfield. In this case, all of the albums’ guitar work had significant weight in the presentation and vocals also took on a full bodied presentation. 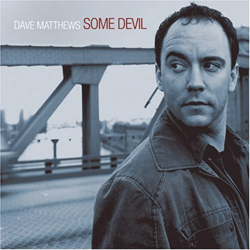 Treble isn’t very bright on the On an Island album so I switched gears to David Matthew’s Some Devil release. The track entitled “Dodo” has a lot of bright percussive sounds from instruments such as cymbals, tambourine, and shakers so it’s a good test to see how the upper range is being presented. The sound was rich with a lot of detail and was lacking any unpleasant sibilance or harshness.

When using the XPA-2, I also noticed a big improvement with imaging compared to my integrated amplifier setup. Vocals were dead center and other instruments were spread out across the whole sound stage. In general this setup really made everything feel more like a sound environment. I practically forgot that I was listening to only two speakers.

Emotiva describes this amp as neutral and I’d have to agree with them. I didn’t hear any colorations that I would complain about. The main thing I enjoyed with the XPA-2 was that it gave each and every instrument a full delivery.

The tests were performed with both channels driven. All distortion measurements were made within an 80 kHz bandwidth.

Frequency response was within 1 dB from 10 Hz – 50 kHz. Notice that at 20 volts, the response attenuates sharply above 50 kHz. This is probably a mechanism to protect speakers from being exposed to high levels of frequencies above the audible band.

THD+N vs. Frequency shows good performance at 8 ohms and 4 ohms. This amplifier should be able to drive just about any speaker out there.

The Emotiva XPA-2 is an excellent two-channel power amplifier that will deliver dynamic ranges to your speakers that you never knew you needed or wanted. Emotiva is offering this product at an exceptionally low price and you can take advantage of additional holiday savings right now. If you have been in the market considering separates or just want extra headroom, this amplifier should be at the very top of your short list, Period.