Up NextSpeaker set-up: Towers, center channel, subs ….concerned about sound now, since not all speakers are here, and future sound when complete

Question:
I have recently purchased a Samsung Ultra HD TV. Given that the TV up-converts incoming signals, is there any reason to purchase a 4K upscaling Blu-ray player?

Answer:
The question of video processing has become a confusing one in recent years because it seems that every component in the signal chain offers some sort of solution. I’m surprised my microwave oven doesn’t have at least an HQV chip built in!

The fact that you’re asking this question means you’ve recognized the importance of choosing one and only one component to handle scaling chores. When you have multiple devices processing a video signal, degradation often results.

At the most recent CEDIA Expo, I watched a very compelling demo at the Sony booth where they compared their upscaling algorithm to native 4K content. As you may have read in my review of the XBR-65X900B television, its scaling solution is very good. There would certainly be no need for an upscaling Blu-ray player with that TV.

I have not had the opportunity to test a Samsung 4K display yet but my recommendation to you would be save your money and let it handle the scaling. The main reason is that converting 1920×1080 to 3840×2160 is the easiest thing for any device to do well. Why? Because the math only involves doubling the pixel count.

If you have a copy of either Spears & Munsil benchmark disc there’s an easy test you can do to see what I mean. Display a 1-pixel multi-burst pattern. You’ll see that it looks exactly the same on your 4K TV as it would on a 1080p set. If you were to scale the pattern to some interim resolution like 2560×1440 (found in many computer monitors), the 1-pixel lines would disappear.

The only other artifact to watch out for is ringing, also known as edge enhancement. That is typically caused by aggressive anti-aliasing in an effort to smooth out diagonal lines. 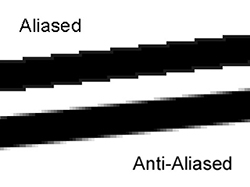 Anti-aliasing uses subtle shading to reduce the effect of pixilation inherent in diagonal lines. In the example above you can see that extra gray steps have been added to help smooth out the jaggies. If the technique is applied too aggressively, a light or white line will appear to outline the black one. This is what I mean when I say ringing.

Both images above show the artifact but you can see it’s much more obvious on the left pane. Sometimes it’s in the actual content so there’s little that can be done but it can manifest as a result of poor scaling too. It’s one of those flaws that once you see it, you can’t un-see it.

It’s likely that your Samsung TV provides a solid scaling solution for converting 1080p to 4K. If you run the tests I’ve suggested and see extra ringing artifacts, you may want to try an up-converting Blu-ray player but that component may have the same issue. I have found Samsung displays to be of good quality in the video processing department. I’m confident you’ll be satisfied with the up-conversion of your new TV and that there’s no need to add a new Blu-ray player to your system.