Up NextWhy is 3D Through Active Glasses So Dark?

Bipolar Speakers in the Front?

Question:
What do you think of bipolar speakers? Are they worth the price, and do they perform well while playing movies and music? Crutchfield has a special on Definitive Technology bipolar speakers—when you buy the front two, you get the center and two surround speakers. Would this be a good value at $2000? Would you put these in your home system?

Answer:
When it comes to bipolar front speakers, there are two basic types: infinite baffle and opposing drivers. Infinite-baffle speakers have no enclosure—the driver(s) are mounted with their front and back surfaces open to the room, and sound waves emanate from the front and back equally. Examples include so-called flat-panel designs from companies such as MartinLogan and Magnepan, in which large, thin sheets or ribbons vibrate in response to the audio signal. Another type of infinite-baffle design comes from companies such as Emerald Physics, which makes speakers with conventional dynamic drivers mounted in a flat surface with no enclosure surrounding them. 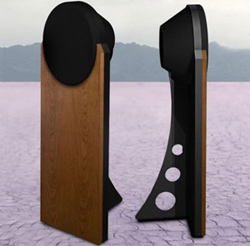 The Emerald Physics CS3 utilizes a coaxial driver with 1-inch compression tweeter in the center of a 12-inch midrange/woofer mounted at the top of a flat surface with no enclosure. The back of the driver is covered in an acoustically transparent material in this photo.

By contrast, Definitive Technology makes speakers with opposing drivers—that is, dynamic drivers are mounted on opposite faces of a more-or-less conventional enclosure. In this case, the sound waves emanating from the front and back can be in phase or out of phase with each other, depending on the speaker’s design. If opposing diaphragms move in opposite directions, both moving outward and inward together as they do in the Definitive Technology speakers, the sound waves will be in phase with each other, and the speaker is rightly called bipolar. 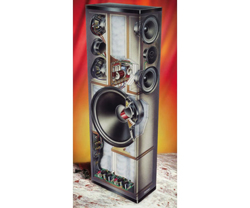 In this cutaway diagram of the Definitive Technology BP-7000SC, you can see drivers mounted on the front and back of the enclosure. In this model, there is also a subwoofer mounted in the side.

The question of whether bipolar/dipolar main speakers sound better than monopole designs (speakers with drivers mounted on one side of an enclosure) is hotly debated. In general, bipole/dipole speakers must be positioned well away from all walls in a room because of the reflection of the rear sound waves from the walls. If the speakers are placed too close to the walls, the sound can become muddled with too much low-frequency reinforcement. Of course, monopole speakers should be placed away from walls as well, but not as far as bipole/dipole designs.

I’ve always believed that the placement of bipole/dipole speakers is less flexible than monopoles, but Secrets reviewer Piero Gabucci came to a different conclusion in his review of the Definitive Technology BP-8040ST, saying, "Speakers in general will suffer if not placed specifically the right distance from the rear and side walls effectively sucking breath from a narrowed soundstage, or create blurred definition if not properly toed. Not the BP-8040ST’s, moving them around doesn’t change the sound for better or for worse, it’s simply different…the BP-8040ST’s will adjust to your space nicely."

Another trait commonly associated with bipole/dipole speakers is a very large, spacious soundstage because of reflections from the walls, as illustrated in the diagram at the top of this post, but with less precise localization of individual instruments. Definitive addressed this in its current BP-8000 series by lowering the output level of the rear drivers by 6dB compared with the front drivers, which is said to help increase instrument localization while retaining the large overall soundstage. According to Definitive, it also has the added advantage of allowing the speakers to be placed closer to the rear wall.

I’ve heard MartinLogan and Emerald Physics speakers at some length, and I have to say I’ve always been impressed with the sound—the reputation for a large, open soundstage is completely justified. In all cases, however, the speakers were well out in the room. I haven’t spent much time listening to Definitive Technology bipolar speakers, but I’ve heard nothing but good things about them from others I trust.

I suspect that the deal being offered by Crutchfield is very good—as long as you can place the fronts where they sound best in your room. To reiterate what Piero said, "…moving them around doesn’t change the sound for better or for worse, it’s simply different." So you need to find the position that produce the sound you like the best. And that will certainly be out in the room to one degree or another. If you can do that, I bet you’ll be pleased with the results.