Up NextVintage analog stereo and audio system: is there a cost effective method to introduce signal delays among speakers

Question:
I have been into audio since 1974 and have upgraded may times (still have the old stuff). I now have Blue-ray and full HD projector as well as a full HD video camera. I have been looking at receivers and amps that have HDMI in and thru as well as DTS-HD decoding. What I do notice is I do not see units with 5.1 analogue inputs. Having a large selection of surround DVD-Audios and SACD’s does this mean I cannot play them properly through these units. Do they still make 5.1 surround amps/receivers that have the new decoders (DTS-HD and Dolby HD) as well as surround analog inputs.

Answer:
Indeed the proverbial “5.1 analogue input” has all but fallen by the wayside. It first surfaced in the mid 90s as a way to market receivers and processors as “Dolby Digital Upgradable” in that it could be used to connect an outboard AC3 decoder such as the venerable Yamaha DDP-1 reviewed by Secrets some 19 years ago. In the later days of LaserDisc, this would have been the pinnacle of home theater audio.

I never had a DDP-1 myself, but I recall trading up to a receiver with the 5.1 analogue input just so that I would “be ready” for DVD. Ironically I got very little use out of it. The moment DVD hit, Coax and Optical digital connectivity became ubiquitous, almost overnight, with companies churning our receivers with digital inputs and Dolby Digital decoding (and in equally short order DTS was added). I upgraded to a receiver with Dolby Digital within months of getting my first DVD player. 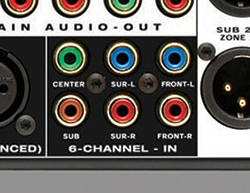 Implementing an analogue 5.1 connection between player and receiver was always a tenuous issue at best. Dissimilar bass management and or/time alignment, extra I/O stages, loss of ancillary processing, in some cases re-digitization of the audio: all made for a bit of a mess. The 5.1 analogue input might have been set aside a lot earlier than it has been were it not for the sake of what posterity records as a decidedly niche market: DVD-Audio, and subsequently SACD, since these could not be transported by the Coax or Toslink digital connections.

When HDMI hit the market, everything changed.

With the HDMI interconnect paradigm, DVD and/or Blu-ray players could finally send DVD-Audio and SACD (either raw DSD stream or multichannel PCM) digitally to a receiver or processor. Not only did this make things much simpler, it also alleviated the need for the player to have an expensive analogue audio section (DACs and outputs), something which the receiver or processor by definition should already have. The digital connection also facilitates taking advantage of processes within the receiver, such as room correction or advanced bass management, things which require re-digitizing an analogue input (something we really want to avoid doing if at all possible).

So while there are a scant few pieces still being made with a 5.1 analogue input (mostly the higher end surround sound pre-amp/processors like the Anthems) my advice is to concentrate instead on finding a receiver or processor with the best sound quality your budget allows, even if that means factoring in a new HDMI capable disc player, such as the much lauded Oppo, to play your DVD-Audio and SACD titles.