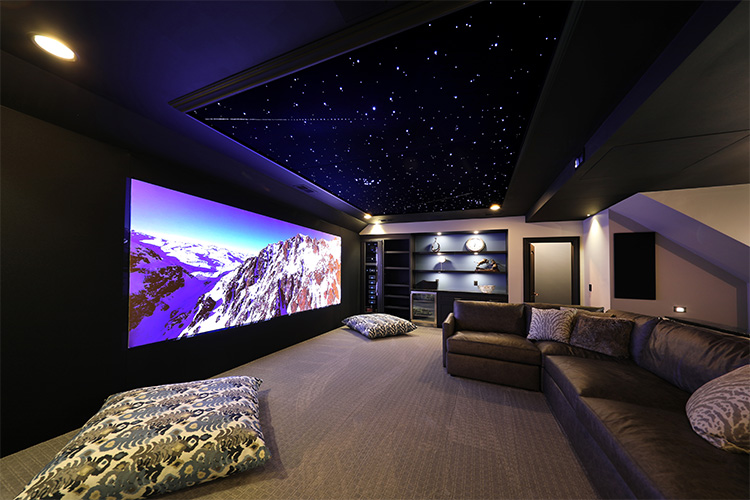 Most home owners who are looking to have a home theater installed envision it tucked away in a cozy basement or other windowless room where they can hide out and get lost in their favourite movies, but Hugh Cobb from Cobb Home Innovations was called upon by a client in Greensboro, NC who had an unusual request. The homeowner, a movie, music and HiFi audio buff, was looking to convert the third story of his house – an unused, partially finished space – into a top-of-the-line home theater and two-channel listening room. 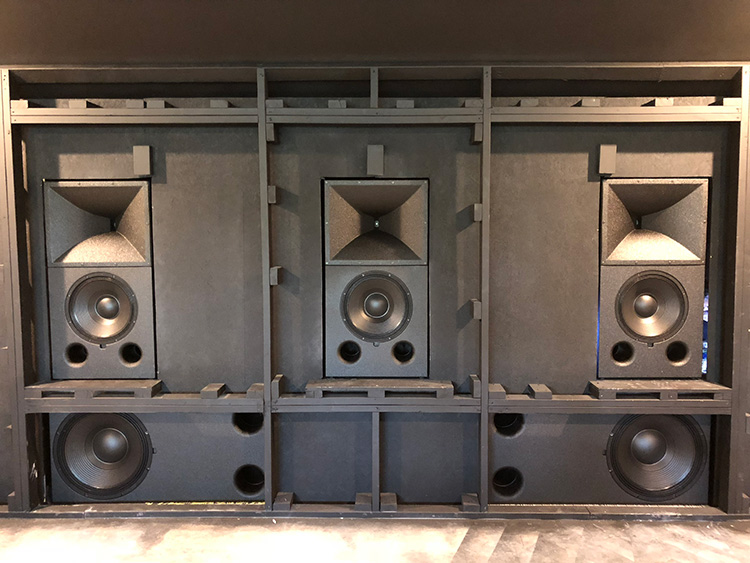 To get an idea of what his team was in for, Cobb requested an on-site consultation where they scoped out the approximately 24-ft x 36-ft room and talked to the client about his vision. The client’s dream was to create a no holds barred, Dolby Atmos home theater and two-channel listening space that was clean, comfortable, easy to operate and sacrificed nothing when it came to acoustics, system performance and automation. “We were absolutely up for the challenge but the job required a full reconstruction project including demolition right down to the studs,” said Cobb. “Starting from scratch required some additional blood, sweat, and tears, but it meant we could bring the client’s dreams for the space – not to mention our suggested design concepts – to life.” 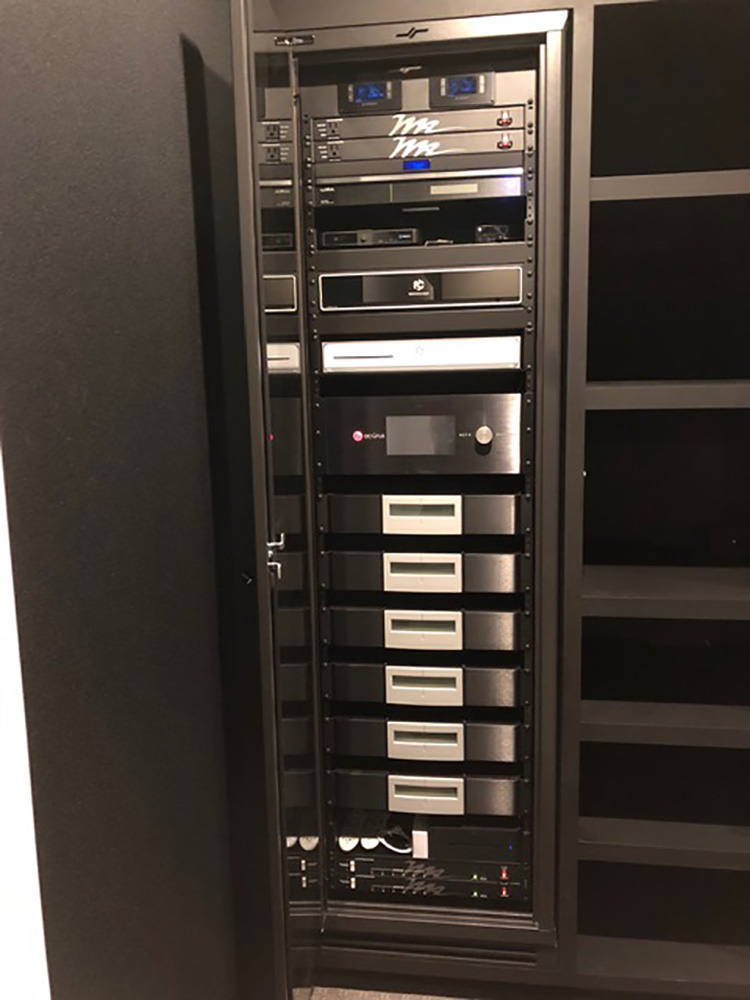 Cobb’s team was tasked with building the space from the ground up. A lot of custom construction work was required to accommodate the AV equipment and design concepts, such as special wall and ceiling lighting features, the installation of a deep front wall to allow for the Pro Audio Technology front LCR speakers behind the projection screen, and an enclosed but accessible housing for the overhead projector. It was also necessary to run new plumbing from the floor below for the addition of a bathroom and concession area. A mechanical room was installed to provide access to the back of the AV rack, along with all kinds of abnormal HVAC requirements in order to keep the electronics cool throughout the entire system.

Ensuring that the room was a state-of-the-art home theater and 2-channel listening space added another layer of complexity. Cobb’s team needed to accommodate a spot to show off the homeowner’s Pro-Ject turntable, vinyl collection, and Ayon tube preamplifier and amplifiers, while also ensuring that the client’s expensive Lumen White Kyara speakers were not only showcased, but placed in a way that would optimize their performance. In addition to vinyl, the client also wanted to have the ability to stream high-resolution audio content from Tidal through the two-channel system. 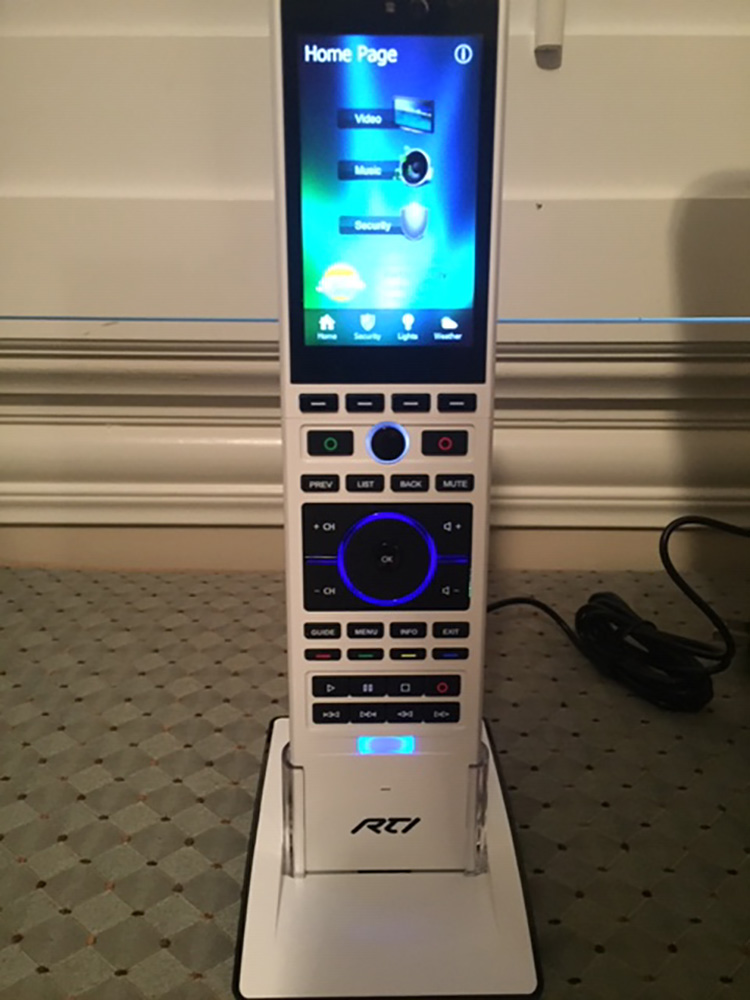 With a nearly limitless budget, Cobb’s team was able to take the design and components of this home theater to the next level. After the drawings were accepted by the client, Cobb’s team demoed the existing room right down to the studs in order to start the reconstruction process. Next, they installed new framing for the additional features and necessary room divides, including the bathroom, equipment room, AV rack, concession area, inset front wall, custom ceiling, HVAC cooling system, and bulk heads for the projector housing. Since they were starting from scratch, Cobb’s team also took the time to sound proof the entire room from the rest of the house.

All lighting installed throughout the theater room is low voltage, including the border LED lighting tucked into the crown molding, and custom Epic Sky Technologies star-lit ceiling, which when combined, gives the illusion that you are looking into space. The option for star gazing at constellations, shooting stars or fireworks, makes the experience even more immersive. Cobb chose Lutron for the remainder of the room’s lighting and shading, which he programmed into the automation system. RTI was Cobb’s choice for its ease of use, ability to program and control all electronics in the room including AV equipment, lighting and shading, as well as for the system’s cosmetic appeal. The homeowner can operate the system using a one touch remote, iPad or voice control via Alexa through an Amazon Echo.

Because the client was insistent that Cobb install only the finest AV equipment available, he spec’d a 7.4.4-channel Dolby Atmos surround sound system complete with 12-ft acoustically transparent Display Technologies screen, Barco Balder Cinemascope projector, and Pro Audio Technology custom install speakers, subwoofers, and amplification. “I’ve been doing this for over 40 years so I’ve essentially heard it all,” said Cobb. “When a client tells us they want the absolutely best we can get for a home theater system, there is only one option according to our ears, and that’s Pro Audio Technology.” 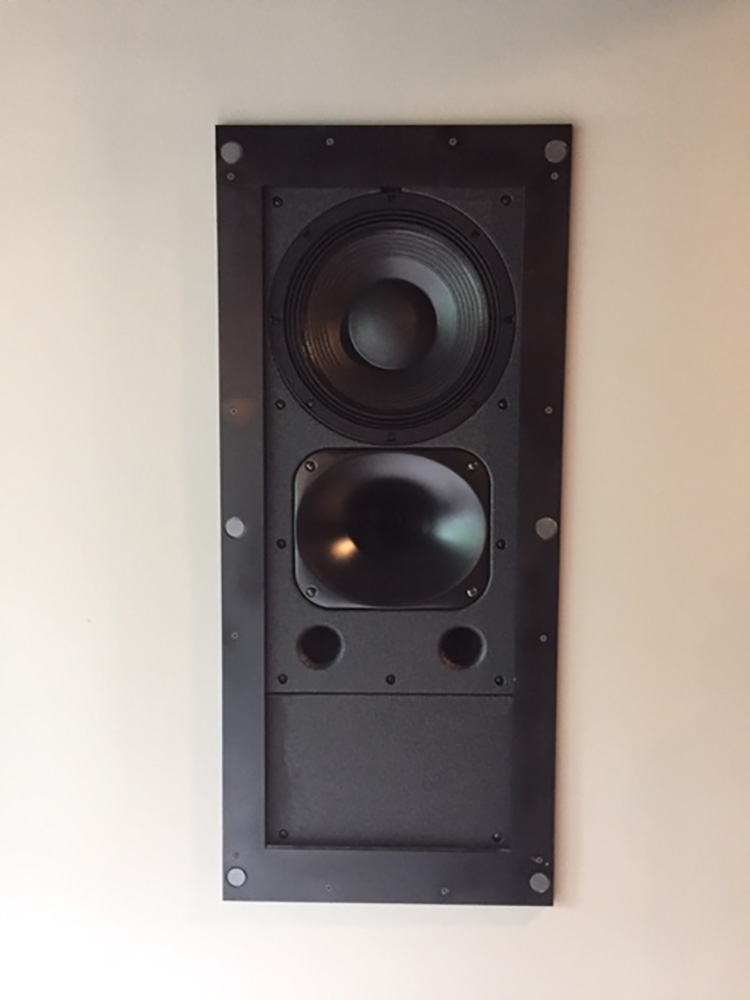 In order to provide a proper power foundation and protect all of the high-end equipment in the room, Cobb’s team installed a SurgeX PF-420 branch circuit and UPS battery backup. Having been in their fair share of tight spaces to install and troubleshoot electronics, Cobb’s team insured ample room behind the AV rack to provide additional air circulation and to allow easy access to the electronics. They also built out a space behind the front wall, to allow access in behind the projector screen and front-channel Pro Audio Technology loudspeakers.

To finish off the two-channel system, Cobb’s team designed special shelving with lighting to highlight the client’s tube amplifiers and turntable. The installers were faced with some acoustic challenges trying to position the client’s high-end Lumen White speakers with enough space on either side of the screen and out from the front wall to provide optimal sound in the prime listening position.

The entire project from demo to the final details took Cobb’s team four months to complete and the result is completely over the top. The customer demanded nothing but the best available for all equipment and room details and that is exactly what Cobb Home Innovations delivered. After all was said and done, the room and combination of home theater and two-channel system not only met, but exceeded the client’s expectations. The homeowner loves the intuitive control and operation of the room without sacrificing quality equipment.

The wow factors for the client include the star-lit ceiling with shooting stars and fireworks show and the remarkable quality of audio and video. The client specifically noted how much he loves when anyone who sits down to experience the home theater feels as though they are totally immersed in what they are watching, and Cobb was not at all surprised by this. “We sell a lot of cinema brands, but Pro Audio Technology gives you the real-world effect,” said Cobb. “When you watch a movie you aren’t just watching it, the experience is so immersive, it makes you feel as though you are actually in the scene.”

Note: All photography can be credited to: Cobb Home Innovations, LLC

Through a thoughtful combination of consumer and professional engineering technologies, Pro Audio Technology (PRO) designs and manufactures a complete range of loudspeakers and DSP amplified loudspeaker controllers that address the needs of high-end residential installations. PRO products unite lively dynamics, high maximum output level, and refined acoustic performance – satisfying even the most discerning music and home theater enthusiasts around the globe. All PRO products are designed, engineered and manufactured in the USA. Pro Audio Technology products are available globally through an elite group of high-end residential custom installers. Pro Audio Technology is the brand name of Professional Home Cinema, LLC.