Canadian audio specialist Paradigm today launches its Founder Series, a six-model range of premium loudspeakers that bring high-end performance and luxurious style to hi-fi and home cinema systems. Founder is the first completely new speaker line to be introduced since Paradigm founder Scott Bagby reacquired the company two years ago. Though it draws on nearly 40 years of Paradigm innovation and evolution from the award-winning flagship Persona range, it brings a host of new technologies to its driver designs, cabinet construction and even the hardware that holds it all together.

Designed, tested, engineered, and manufactured at Paradigm’s state-of-the-art 225,000 square foot facility in Toronto, Canada, the new series includes three floorstanders, the Founder 80F, Founder 100F, and the hybrid active/passive Founder 120H with ARC Genesis room correction; along with the Founder 40B standmount, Founder 90C centre and Founder 70LCR which can be installed vertically or horizontally. The Founder Series offers anyone looking for great sound the ultimate in flexibility when it comes to system building.

“The Founder Series is a strong accomplishment for Paradigm. We are combining an iconic design, sound that has astounding clarity along with a delicate and believable realism, and a sonic impact that will send shivers down your spine.” Said Scott Bagby, Founder and CEO, “I am immensely proud of our development teams’ devotion to produce a line that clearly exceeds all expectations”

All models are available in a choice of four artisan-grade finishes – Walnut or Black Walnut fine-quality wood veneer, and Midnight Cherry or Piano Black high gloss.

Paradigm’s patented technologies are developed completely in-house and along with obsessive attention to detail and exhaustive testing, deliver dynamic, detailed and lifelike performance that out-performs higher-priced products. Commenting on the new range, Dave Baker, Director of North American Sales, said: ‘Pleasing both the stereo and home theatre enthusiast, the Founder Series should serve as a reminder that exceptional audio performance does matter.’ 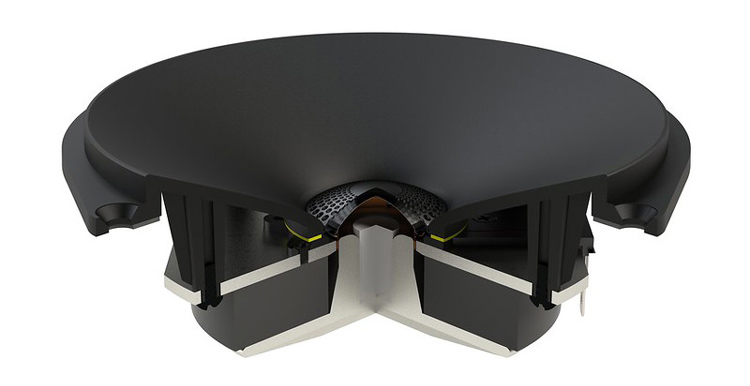 AL-MAC™ High-Frequency Driver – Paradigm’s newest tweeter design is made lighter and stronger with a special combination of Aluminum, Magnesium, and Ceramic materials. It has a natural resistance to uncontrolled resonance that makes it far more accurate and responsive than other designs. It’s paired with a special Oblate Spherical Waveguide (OSW™) that maintains sonic focus on the listening area. This makes it perfect for large, open-plan rooms with reflective surfaces like windows and hardwood floors. It doesn’t just sound good on paper, it performs in the real world. 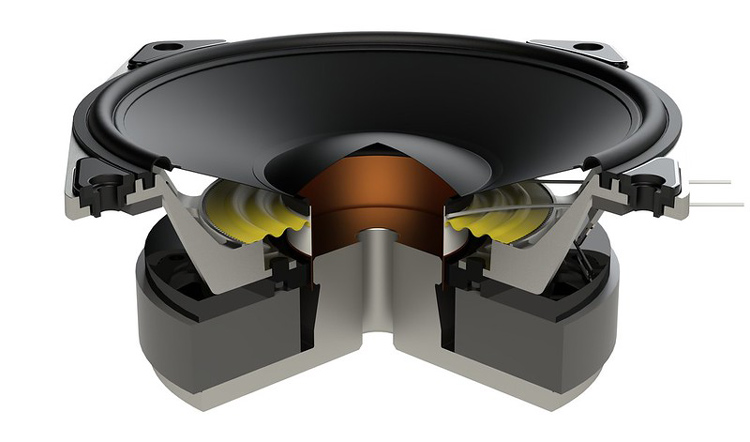 AL-MAG™ Midrange Driver – Founder’s midrange driver is developed with listener sensitivity in mind. Focusing its performance where our ears are most sensitive, the cone is a 6-inch Aluminium Magnesium alloy driven with a 2-inch multi-layered voice coil and a Perforated Phase Alignment (PPA™) lens. The result is unparalleled realism and accuracy. 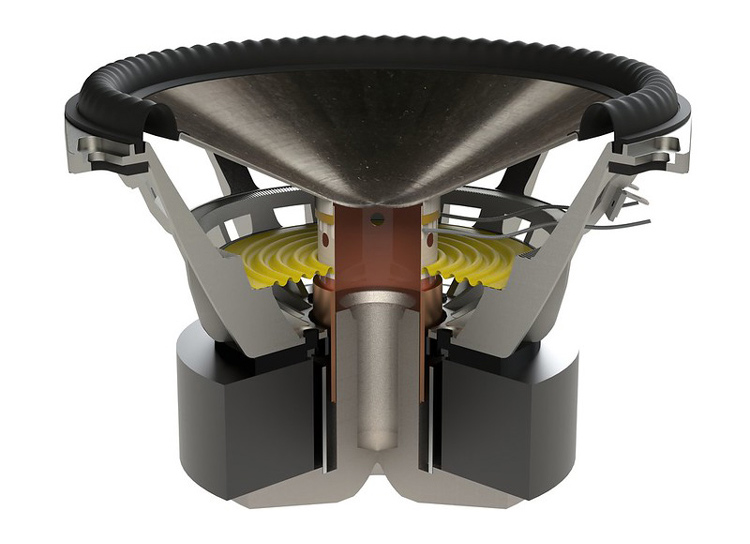 CARBON-X Unibody Bass Driver – To maintain clarity in the lowest frequencies, Paradigm has created an ultra-stiff, ultra-strong bass driver called CARBON-X in 5.5, 6, 7 and 8-inch sizes. It’s made from mineral-infused carbon fiber and moulded as a single piece to maintain control at the highest volumes. Combined with Paradigm’s patented over-moulded Active Ridge Technology (ART™) surround and Advanced Shock-Mount Isolation™ hardware, it is both detailed and powerful.

Dual-Sync™ Continuous Flux Motor – Both the 90C and 70LCR models use a coaxial driver with an AL-MAC™ tweeter centrally mounted in an AL-MAG™ midrange cone profiled to match the sonic characteristics of the OSW™ designs in the rest of the series. Here, Paradigm’s patent-pending Dual-Sync™ Continuous Flux Motor solves the issues associated with drivers that have combined magnet structures, resulting in a low-distortion, high-output midrange/tweeter combination.

Cascade Fusion Bracing – In place of the traditional square cabinet geometry, each Founder Series model features a faceted enclosure, constructed from ¾-inch MDF and 1-inch thick top and bottom insets. The bracing is fused directly into the walls of the cabinet, then the cabinet is folded around the frame as a single piece. The angular longitudinal central brace forms a structural core while dividing the walls of the cabinet into non-uniform surfaces. These surfaces are reinforced by additional horizontal cascade braces in optimal locations to further prevent excess energy from escaping through the walls of the cabinet. Unlike the rest of our technologies, the Founder cabinet is meant to be seen and NOT heard. 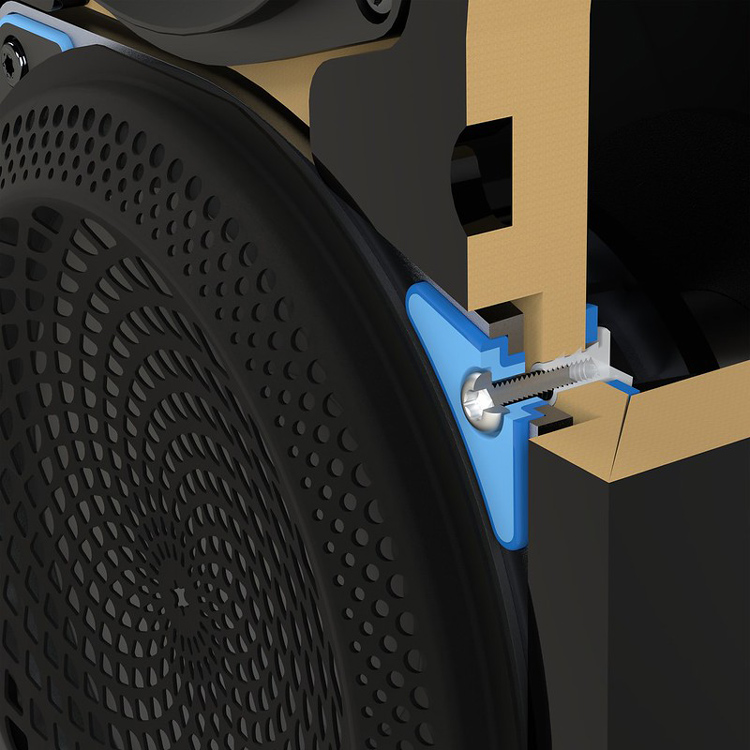 The Founder line-up – details and pricing 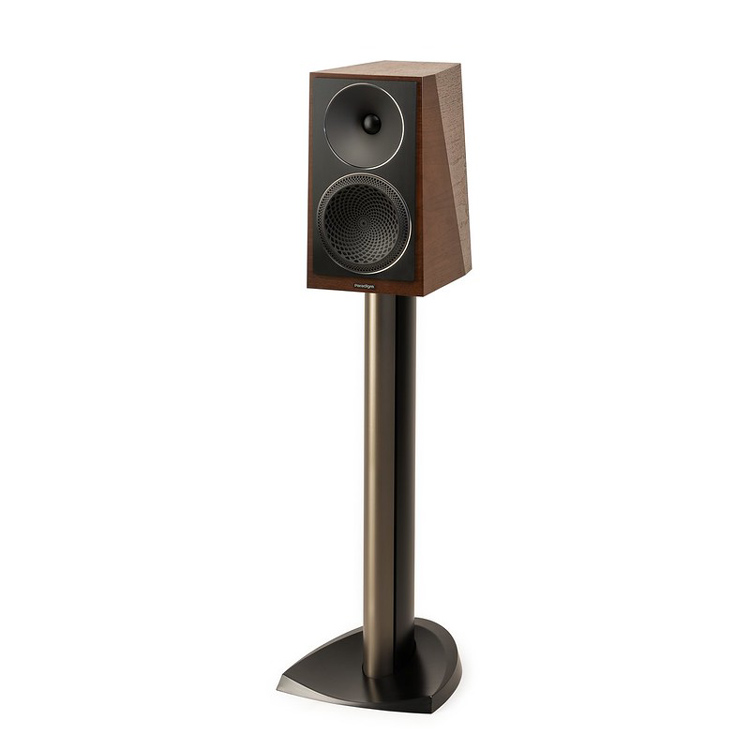 Founder 40B $1,099.99 US $1,299.99 CAN (each)
The Founder 40B Standmount Loudspeaker delivers the innovation and performance of the Founder Series in an affordable and compact cabinet that’s less than 20cm wide. A 1-inch AL-MAC™ Ceramic Dome Tweeter with an OSW™ Waveguide and PPA™ Lens renders crystal-clear detail and imaging. A 6-inch Ultra-High-Excursion AL-MAG™ mid/bass driver with a PPA™ Lens and Active Ridge Technology (ART™) Surround provides the foundation for a broad and deep soundstage. An optional stand is available. 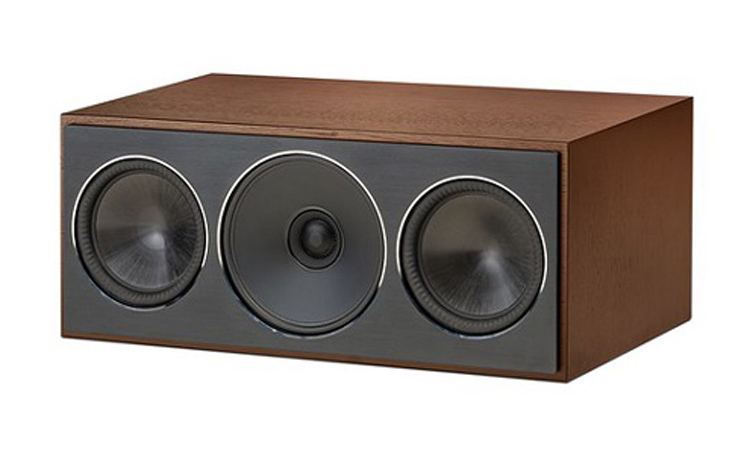 Founder 70LCR $1,699.99 US $2,099.99 CAN (each)
The 70LCR is a highly capable loudspeaker that can be used both horizontally as a compact centre channel or vertically as a main stereo or surround unit. Its three-way sealed cabinet is populated with a 1-inch AL-MAC™ Ceramic Dome Tweeter with OSW™ Waveguide and PPA™ Lens coaxially mounted in a 7-inch AL-MAG™ midrange driver flanked by two 5.5-inch CARBON-X™ bass drivers with ART™ Surrounds. 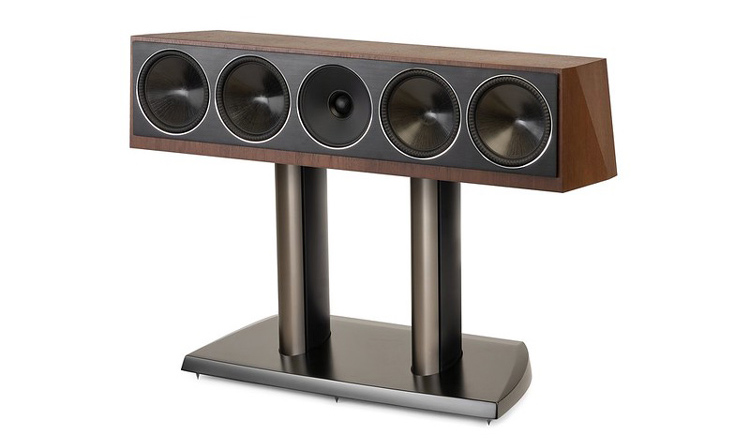 Founder 90C $2,599.99 US $3,249.99 CAN (each)
The 90C Centre Channel Loudspeaker is a true full-range centre that can play down to 47Hz in-room. Its 1-inch AL-MAC™ Ceramic Dome Tweeter with OSW™ Waveguide and PPA™ Lens is coaxially mounted in a 7-inch AL-MAG™ midrange driver flanked by two 7-inch CARBON-X™ bass drivers and two 7-inch passive radiators with Active Ridge Technology (ART™) Surrounds to ensure powerful dialogue delivery from its slender cabinet. An optional stand is available. 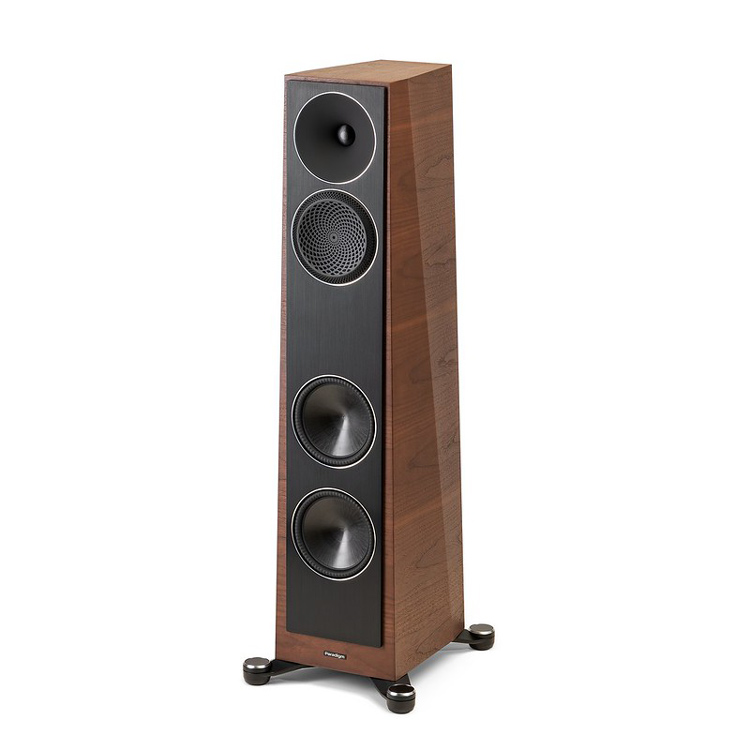 Founder 80F $1,849.99 US $2,249.99 CAN (each)
The Founder 80F Floorstanding Loudspeaker is the most affordably priced tower model in the line. It features a 1-inch AL-MAC™ Ceramic Dome Tweeter with OSW™ waveguide and a PPA™ Lens; a 6-inch Ultra-High-Excursion AL-MAG™ mid/bass driver with PPA™ Lens and Active Ridge Technology (ART™) Surround; and two 6-inch Ultra-High-Excursion CARBON-X™ Cones with over-moulded ART™ Surrounds. Its two-and-a-half way design can reach down to a subterranean 28Hz. 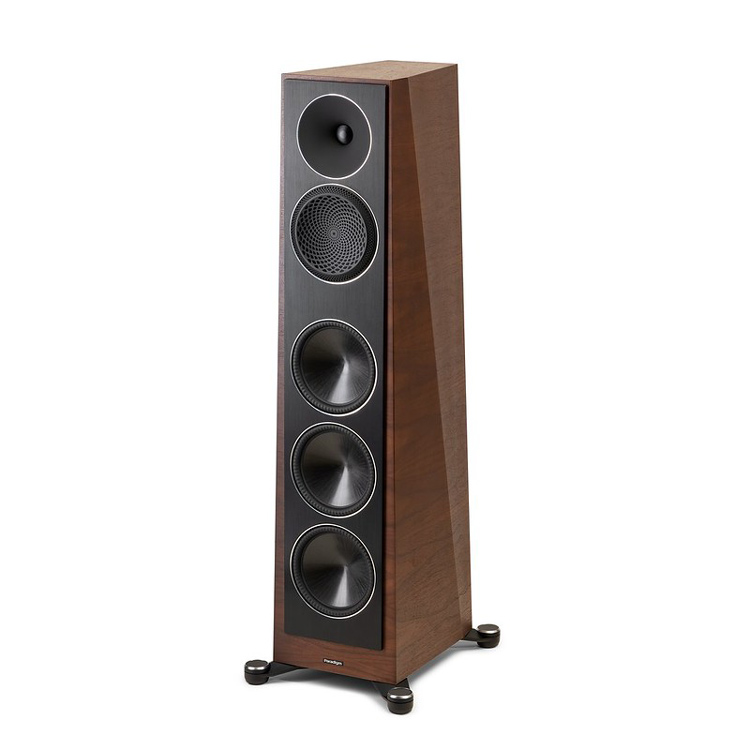 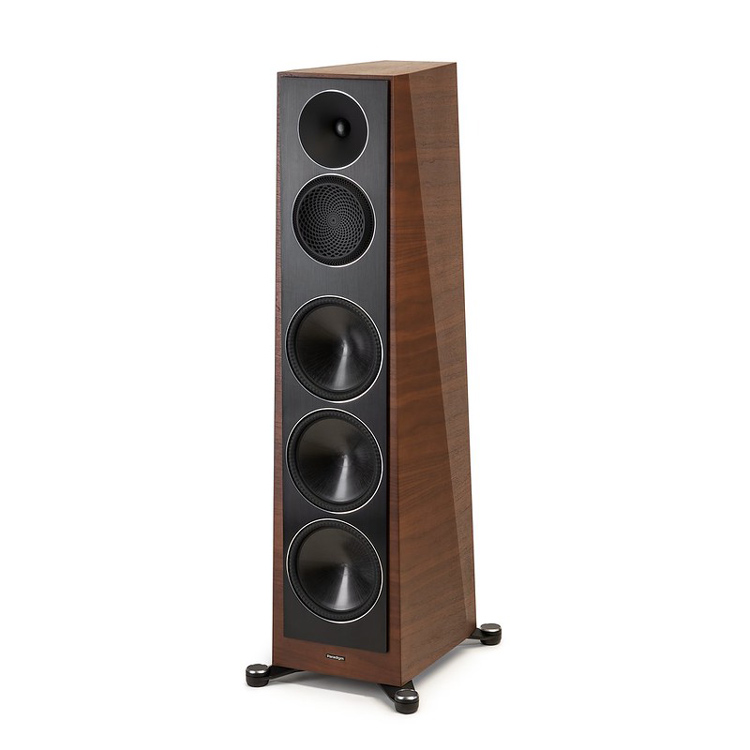 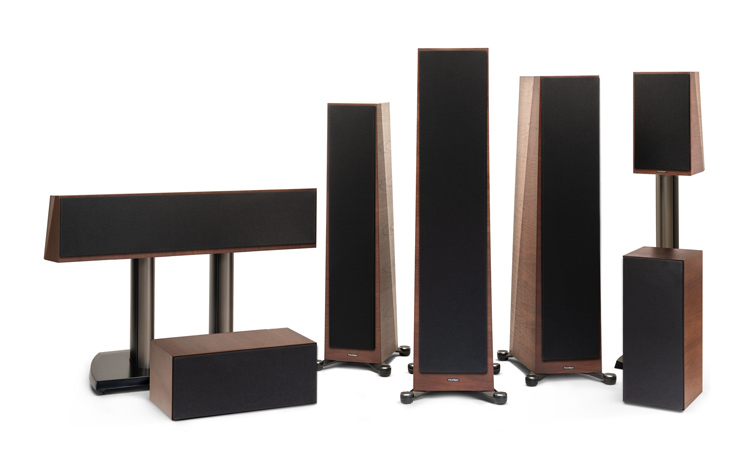 Since 1982, innovative design, advanced materials, in-house manufacturing and state-of-the-art engineering have made Paradigm an international leader in speaker design. With more than 400 industry awards for audio excellence and numerous rave reviews from around the world, Paradigm is committed to staying at the leading edge of speaker technology, consistently achieving the ultimate in sound for music and home theater. For more information, please visit: www.paradigm.com