Up NextCambridge Audio – Edge A Integrated Amplifier Preview
The RAP-1580MKII is what Rotel categorizes as a surround amplified processor, which is a home-theater processor, capable of processing 7.1.4 Dolby Atmos and DTS:X surround formats, with onboard integrated 7-channel Class AB amplifier of 100 Watts output power into 8-ohm loads (140 Watts into 4-ohm loads).

It is short of being called an AV receiver by the lack of a radio tuner in the unit. The RAP-1580MKII comes with a USB measurement microphone for Dirac Live LE room correction technology, a feature that is intended to optimize performance at any setting. The RAP-1580MKII includes a vast array of audio inputs including analog (single-ended and balanced), HDMI with support for 4K video with HDCP 2.2 HDR digital, coax and optical digital, PC-USB with 24-bit/192-kHz processing capability, apt-X wireless Bluetooth, Moving Magnet Phono stage, and front panel iOS USB. The digital to analog conversion is handled by an array of 6 Wolfson 24-bit/192kHz DAC chips. A large front panel display provides easy adjustments of all configuration parameters. Rotel’s RAP-1580MKII carries an MSRP of $4999. My upcoming review will provide an in-depth look into the features and performance of the unit as a home-entertainment solution. 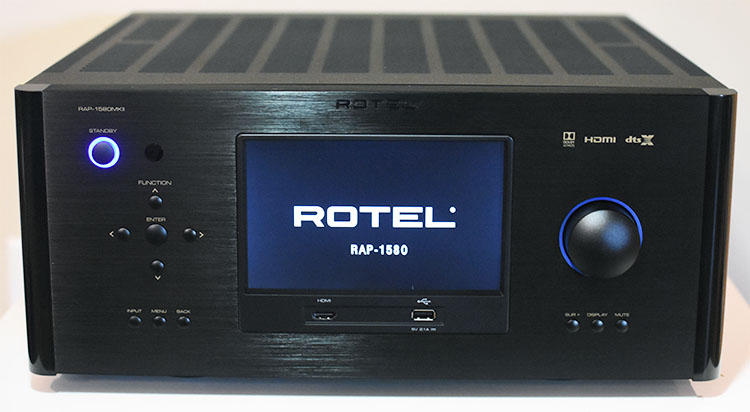