Chris EberleNovember 5, 2015Accessories
Home
Latest ReviewsAccessories
When Apple introduced the iPhone back in 2007, it heralded a revolution not only in the way people communicate but in just what you can do with a smartphone.

Thanks to its WiFi and Bluetooth capabilities coupled with a robust app development system, it became possible to do far more with it than just make calls and post on Facebook. With a well-designed app and a Bluetooth-to-IR converter, you can turn your iPhone into a powerful universal remote. Many such products have appeared on the market and today I’m looking at the latest – the Pronto Peel. 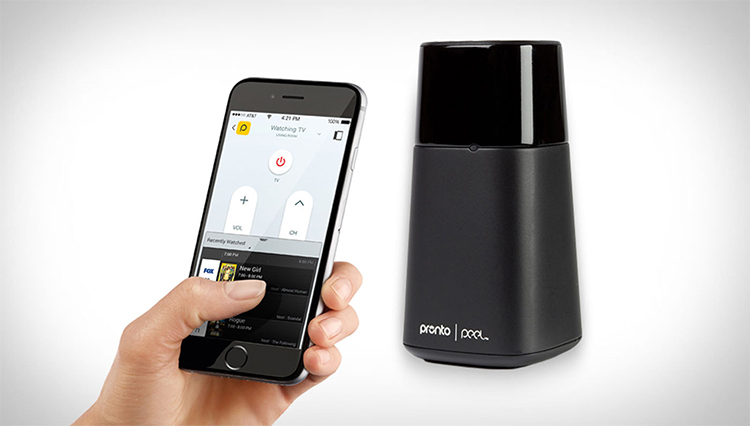 If your AV system consists of more than just a television and cable box, you might be wishing there were a better way to control everything than by using the often poorly designed factory remotes. Once you’ve added an external audio system with a receiver or processor the control dance becomes even more confusing. Then once you’ve figured everything out, it’s time to teach your spouse and children how to turn everything on and set the correct inputs. If you have a DVR there’s the added task of managing channel guides and lists of recorded shows. Without some way to tie everything together into a single remote control, watching TV can become a chore.

Apple iPhone with iOS 7 or higher

High-end media systems often use a system like Crestron or AMX to control components. These products are extremely reliable and once programmed, pretty much fool-proof. The caveat is they are not DIY in any shape or form. Putting one of these in your home means calling a professional to install and program the system. A system like this can be quite expensive and making changes usually means a phone call to your dealer.

Since the iPhone has Bluetooth, all you need to turn it into a remote control is a good app and a small converter to blast IR signals out to your components. The Pronto Peel is a $50 product you can buy in many brick-and-mortar stores or online. The converter runs on batteries so it’s easy to set up and won’t have you running a power cord to your coffee table. And the free app walks you through setup of your devices and activities so you can be up and running in about 15 minutes.

Can this truly be the product that relegates all your factory remotes to a drawer never to be seen again? Let’s take a look. 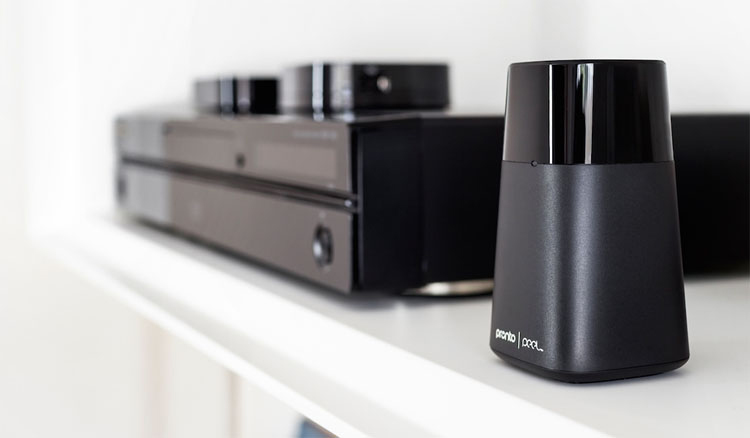 Bluetooth remote kits like the Pronto Peel need only two parts – a converter and an app for your iPhone. Pronto’s converter is about the size of a pepper grinder and finished in a matte black. The top portion is an extremely powerful IR blaster that sends signals out in all directions. The best part is it runs on four AA batteries so there’s no need to run yet another power cord around your living room.

The converter also has a single jack for a corded stick-on IR emitter. You would use this if you had any components hidden behind cabinet doors. The package includes one emitter attached to a 10-foot wire. It’s designed to attach directly to the IR sensor of one component with double-stick adhesive. Typically you can only use it once so be certain where you want to install it before committing. Since my devices are all exposed, I didn’t need to use the emitter.

The second part is the app and that can be added to your iPhone by downloading it from the iTunes Store. You’ll need iOS 7 or higher so users of older phones are out of luck. And right now, the iPhone is the only supported platform. You can use your iPad too but the app simply scales to the larger screen. An iPad-specific version is also in the works for release next year.

The app’s home screen shows you what’s on TV in real time. 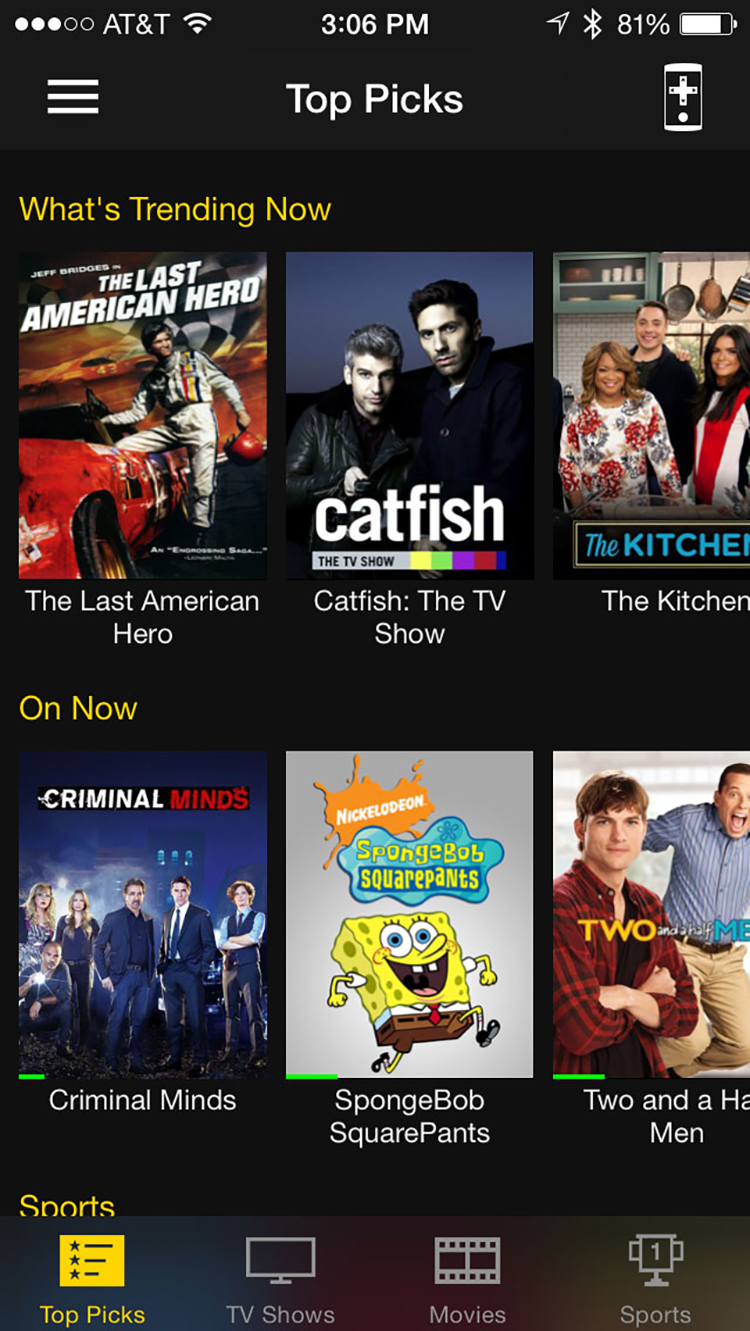 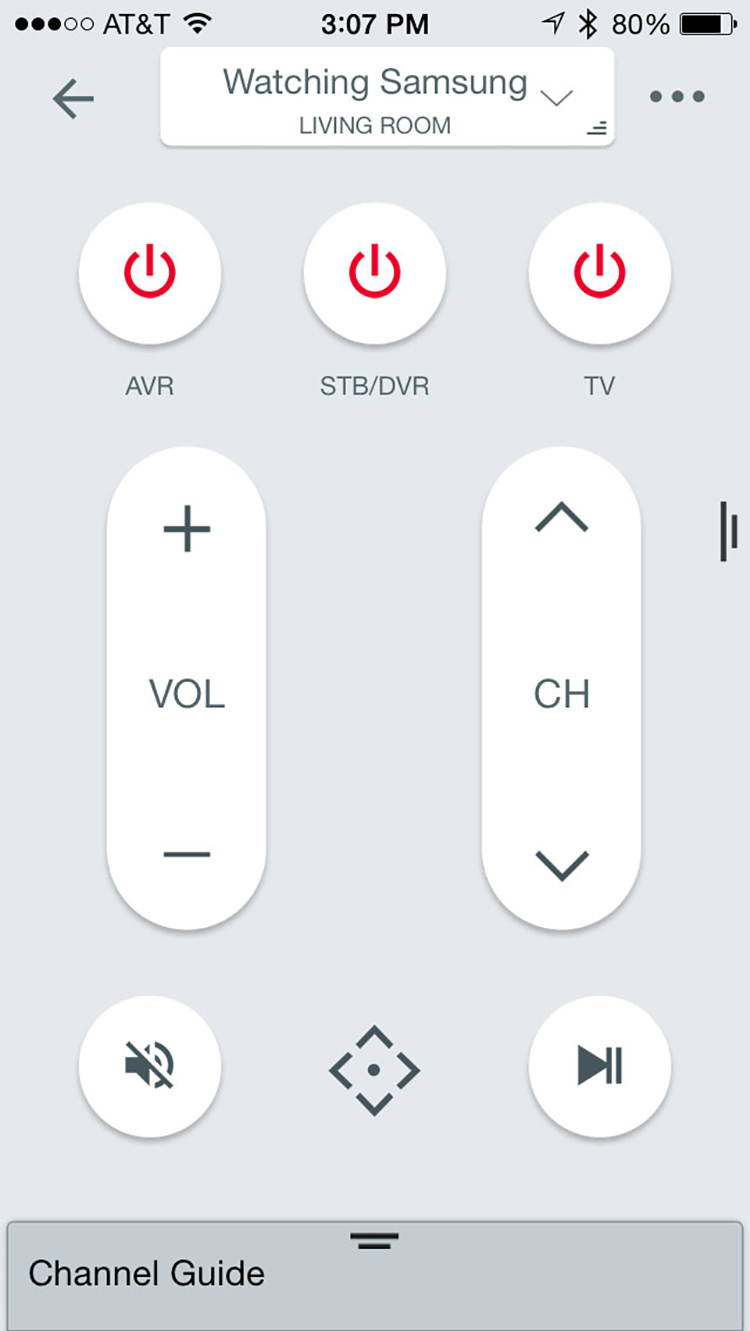 You can sort and filter shows by genre and see more or less information according to your preference. Clicking on a show will take you right to that channel but all components must be turned on first.

Shown above is the activity screen. Power toggles are across the top with volume and channel controls featured prominently. Additional buttons can be revealed by scrolling down. You can also access specific devices and their individual commands from here. 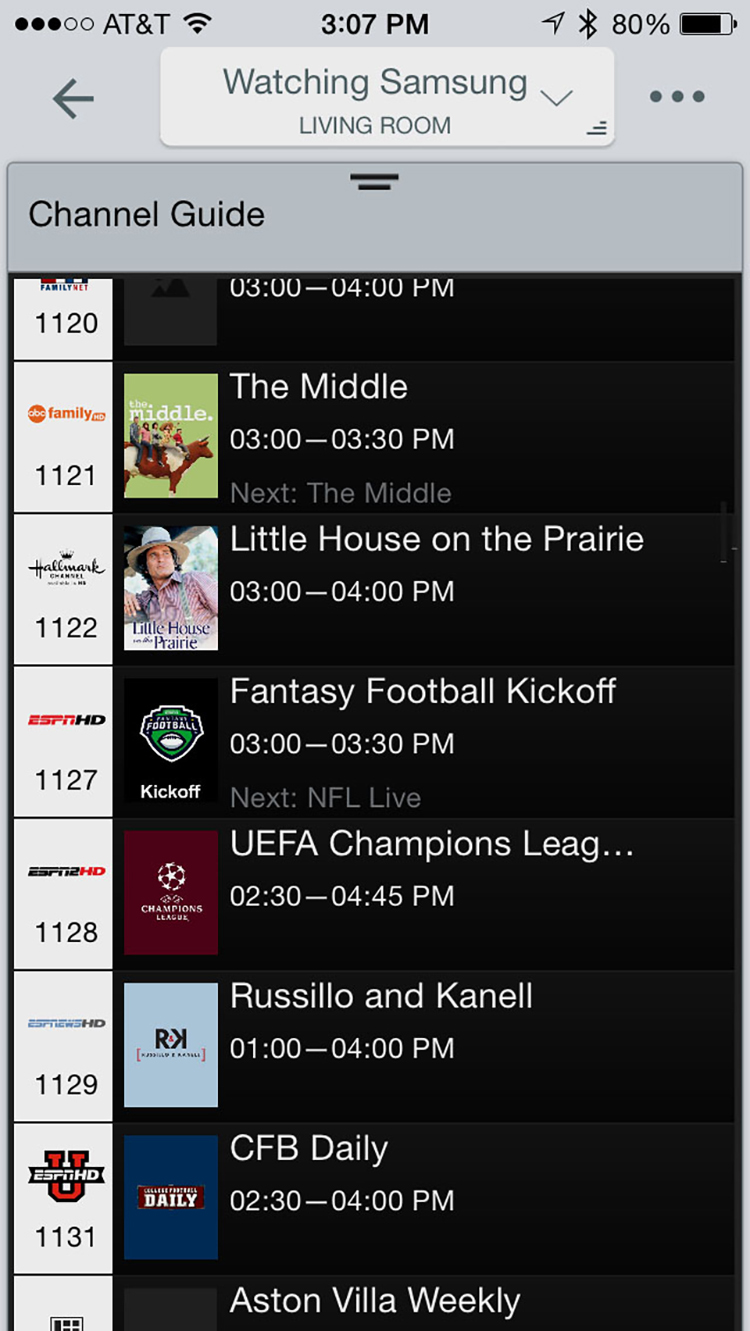 Touching Channel Guide at the bottom brings up a complete listing of the feeds available from your cable or satellite provider.

The channel guide is accurate once you enter the name of your provider and the zip code. You can apply filters for just HD channels to avoid scrolling through hundreds of listings. And each entry tells you what show is currently playing. Pressing the button takes you directly to that channel.

I placed the IR blaster on a lower shelf beneath my coffee table where it was out of sight but could still hit all my components with ease. App setup begins by pairing the iPhone with the blaster which only took a few seconds.

The app then asks questions about your cable provider and zip code, then moves on to setting up activities. You’ll need to know a few things like which component controls the volume and what inputs your TV and AVR use. If you’re unsure of the input numbers, the app will test them for you until it finds the right one. If something doesn’t respond correctly you can always go back and make changes later. If you need to teach the Pronto a command that’s not in the database, it has that capability. The converter has a receiver that will add commands from your factory remotes. 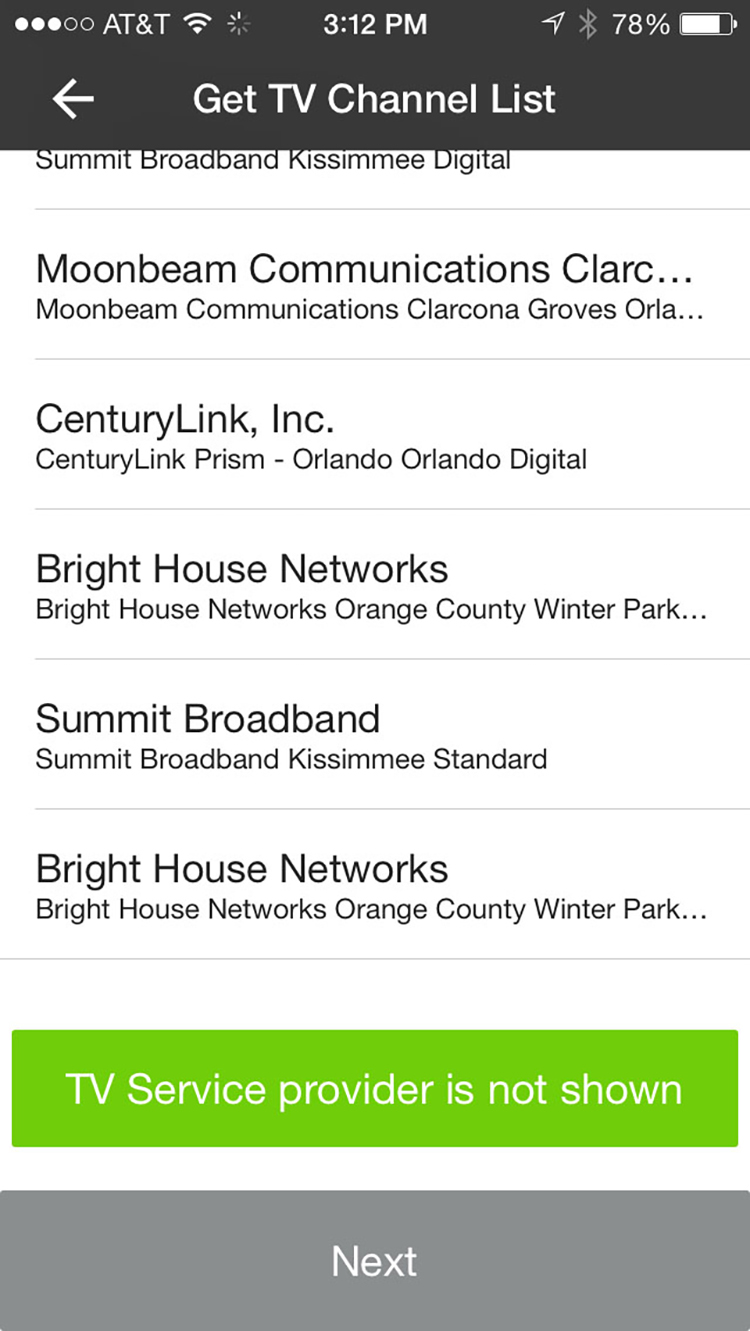 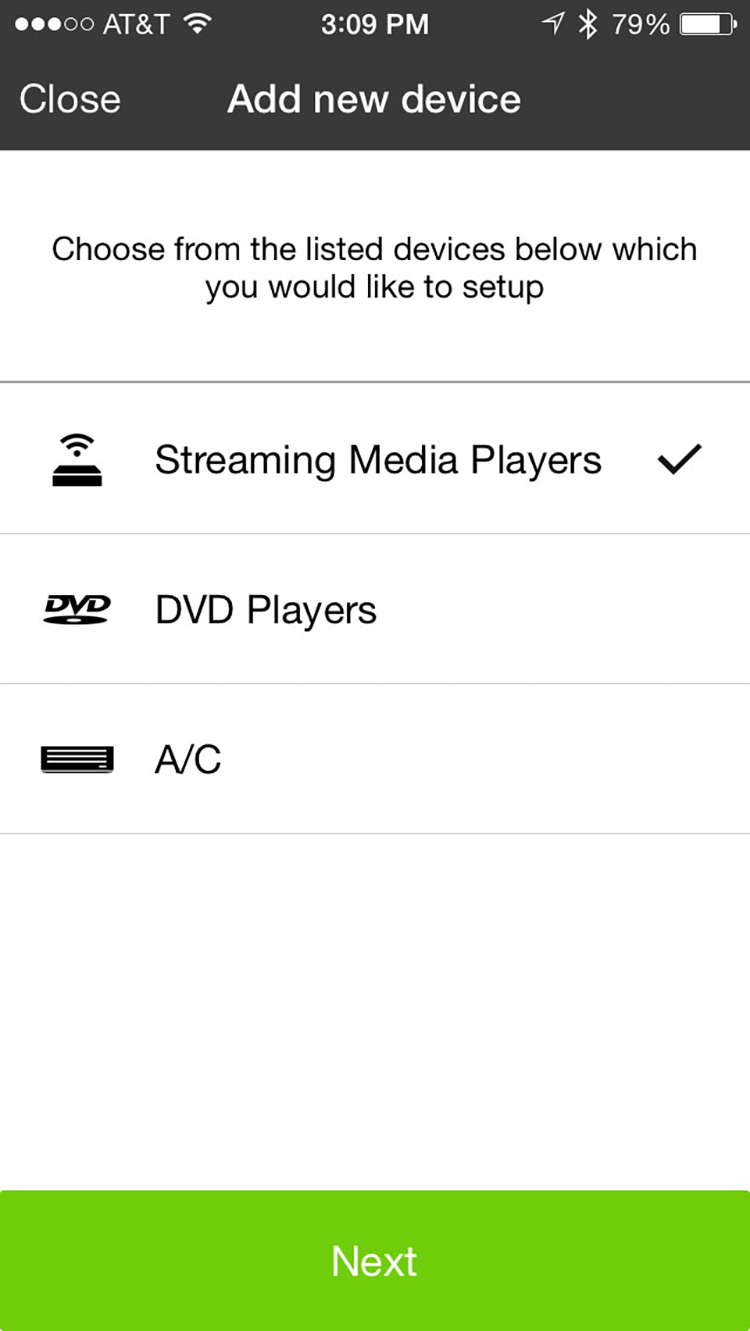 Once you enter your zip code just select your provider from the list. I use Bright House here in Florida.

When you create an activity, you choose the source it’s based on like a DVR or streaming player. After selecting the category, the next screen gives you a list of brands to choose from. 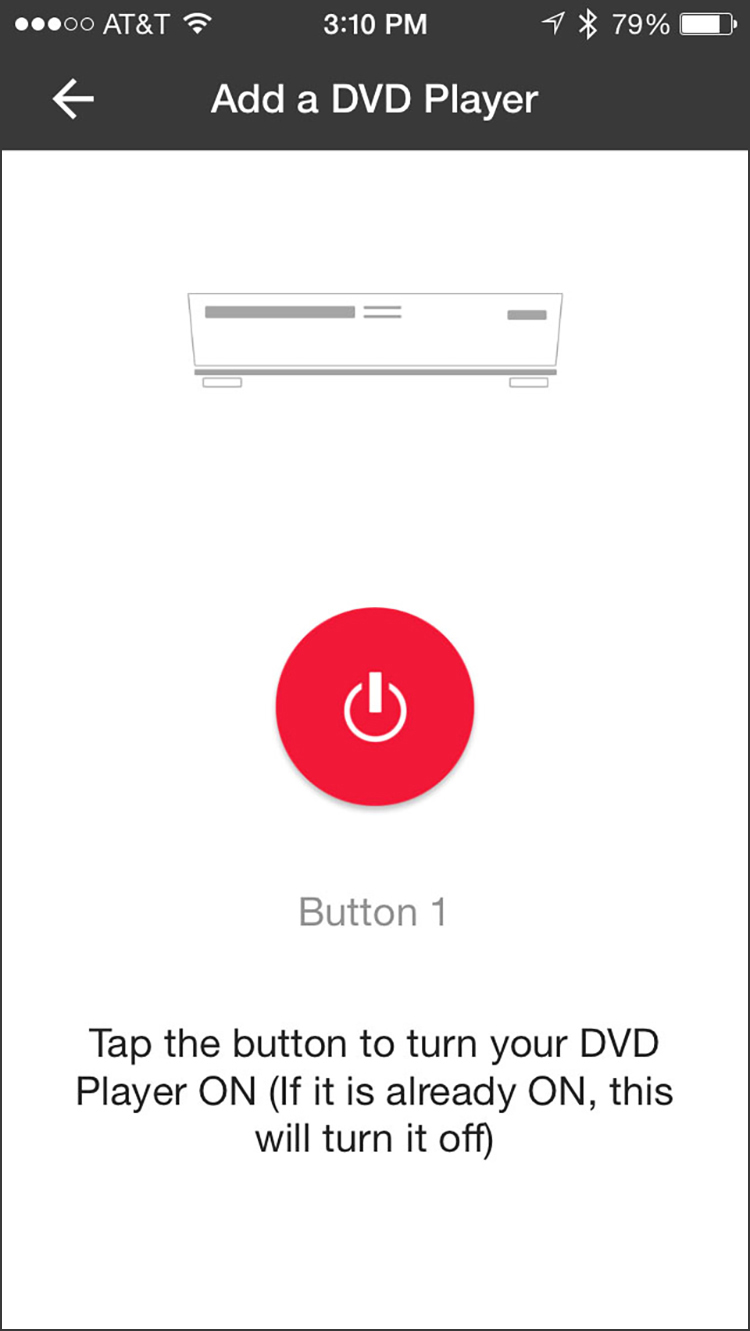 The app will let you test a power-on command to see if it’s loaded the right codes. Once you get a heartbeat, you’re pretty much done. 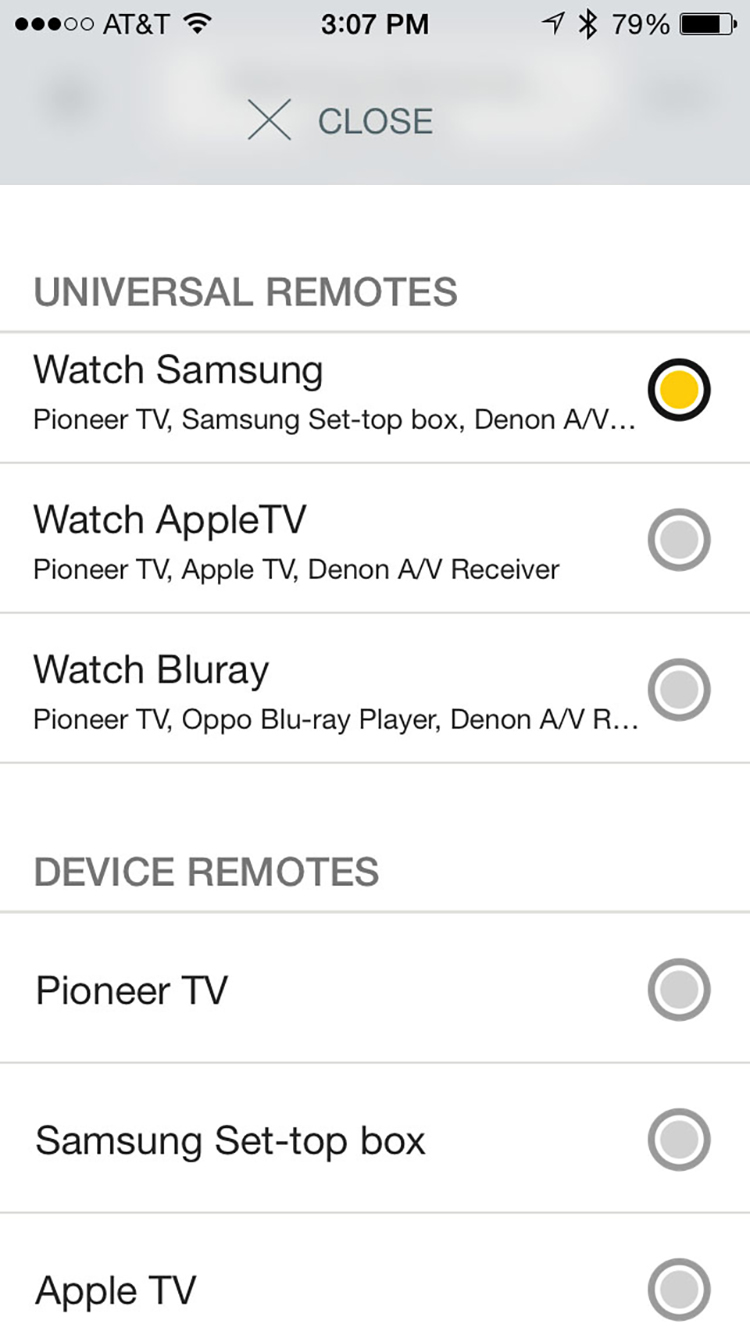 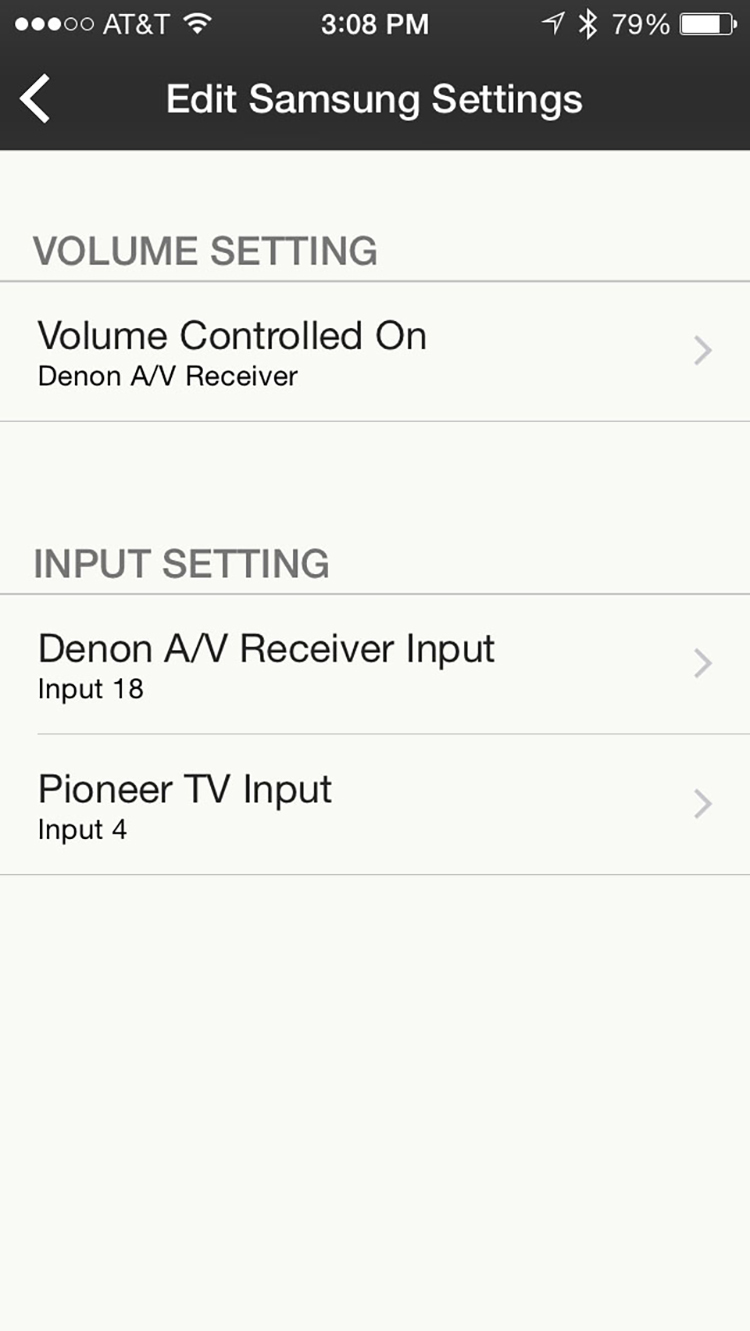 It took me about 15 minutes to create three activities. Aside from watching cable TV, I created setups to control my Oppo Blu-ray player and Apple TV. The screen layouts are fixed and cannot be customized by the user. I was able to find all the necessary commands to control my gear but some of the buttons aren’t immediately apparent. Scrolling down the various device screens revealed the additional functions.

If you need to change volume control or input settings after the fact, this screen lets you do that.

Once I finished the setup I was able to control my system pretty well but I encountered a few things that I hope Pronto will consider adding to a future app update.

Firstly there’s no way to turn everything on or off with a single button press. You have to go to the activity screen and press the power toggle for each component. And if any inputs are set incorrectly, you’ll have to manually select them using the device mode. The app is capable of macro functions but they only work once everything is powered up. For instance I could switch activities and Pronto would change the inputs correctly. However it won’t power up devices during the macro’s execution. Say you want to go from watching cable TV to using the Blu-ray player. Selecting the new activity switched inputs on my TV and AVR but did not turn on the player, nor did it turn off my cable box. Adding power on and off functions to the macros would be a huge improvement. Even better would be to include a macro editor so you can control the order things are turned on, set delays and switch to the right inputs.

Though the app boots into the home screen showing you what’s playing in real time, you have to turn on your system first before you can watch anything. That means the Top Picks screen is just a channel-changer. It won’t run any macros for you. So again you have to enter the activity screen, turn on all your components and set the inputs before returning to Home or the channel guide.

I also observed random errors when switching inputs on my Pioneer television. When switching activities it would sometimes change to the wrong input forcing me to use the device mode to fix the problem. Other times it worked fine so I think perhaps the code database is not completely accurate for my now six-year old plasma panel.

Other than these flaws, the Pronto works well. My components never failed to respond to the IR blaster which was on the lower shelf of my coffee table. And the setup is a breeze. Creating activities and adding devices to your system couldn’t be simpler. I remember configuring many different Harmony remotes in the past using their PC-based app and I think Pronto’s design is better.

I also liked the real-time program guide. If you’re a surfer, it’s a great way to browse through what’s playing without waiting for your cable box to change channels, which can be pretty slow. By adding favorites and filtering your preferred genres, it’s easy to see what’s on and go right to a specific show that’s playing at the moment. And the pop-up channel guide also tells you the current show as well as what time it ends. This part of the experience is a surfer’s dream. 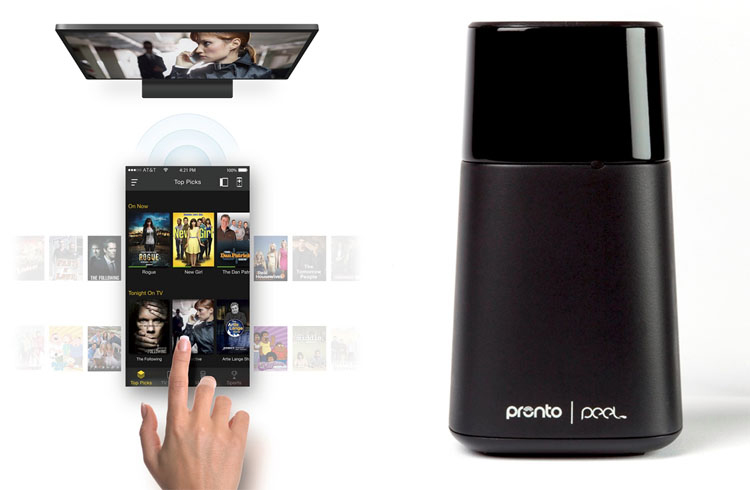 THE PRONTO PEEL is a decent iPhone remote product for under $50 but it does leave out some features.

The Pronto Peel isn’t perfect; what universal remote is after all? What it does well is provide a simple solution for people wanting to control their AV gear with a single remote. It has an easy-to-understand setup routine and very thoughtfully designed channel and show guides. If you like to browse through content rather than sitting down to watch specific shows you’ll find this feature super-convenient.

If you’re more of a control-freak like me though, Pronto doesn’t offer enough customization for the hardcore do-it-yourselfer. The device and activity screens are fixed and although they have complete command sets, you have to adapt to their preset layouts. The biggest omission however is the lack of power-on/power-off functions in macros. A universal remote’s most important task is to turn on your components and set the correct display and AVR inputs. This is what most people find confusing and Pronto doesn’t address that challenge thoroughly enough. The app will change inputs for you but only after devices are powered on. An effective remote needs to be able to control every aspect of your system to be completely fool-proof. Since Pronto is app-based this could easily be added to the product’s next update.

So if you’re looking for a convenient way to browse cable and satellite content on your phone, the Pronto Peel is for you. But if you need total control over a complex multi-component system, it’s not quite up to the task.