This is one of the most beloved movies ever made, so I know that going into the story at length would have no purpose, but for the few of you who have never seen it, I will give a short synopsis.

Twelve-year-old Dorothy Gale (Garland) is knocked unconscious in a Kansas cyclone storm and dreams that she has been transported to a wonderful world called Oz, where she must search for a way to get back to Kansas. Along the path (the Yellow Brick Road) she meets a scarecrow (Bolger), a tin man (Haley), and a lion (Lahr). Together, they set out to find the Wizard of Oz who will help Dorothy get back home. A wicked witch (Hamilton) tries to stop them so she can steal Dorothy’s ruby slippers which have magic capabilities that she wants.

For all of you who own a movie collection, this is an absolutely must-have addition. Do I sound a bit biased? Well, yes, perhaps because I have probably seen it 30 times since I was a child. But, I have never seen it like this. 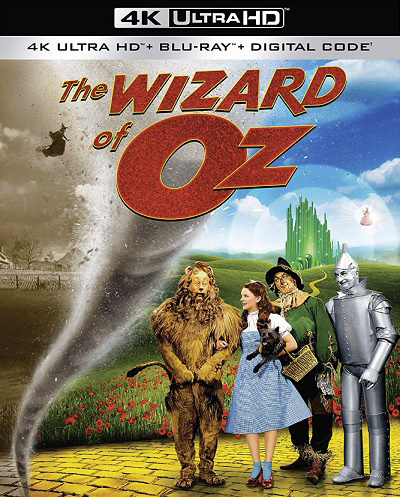 Below are screen shots that I took with my phone camera, so they are actually what the images looked like on my 4K UHD-TV. Wow! 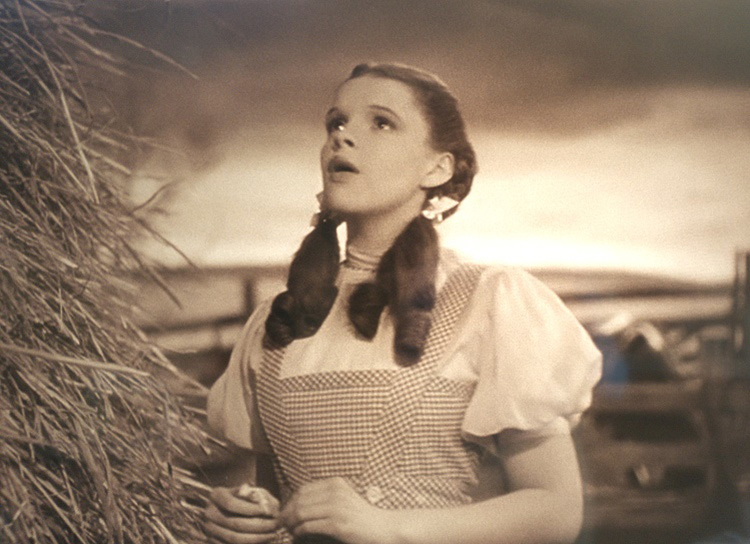 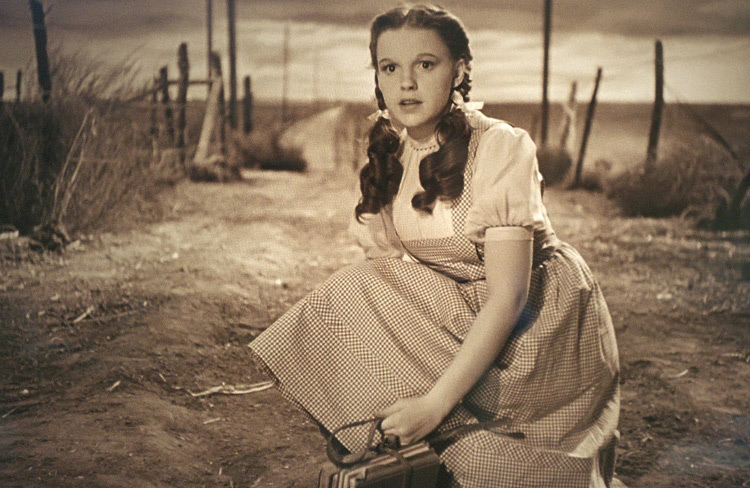 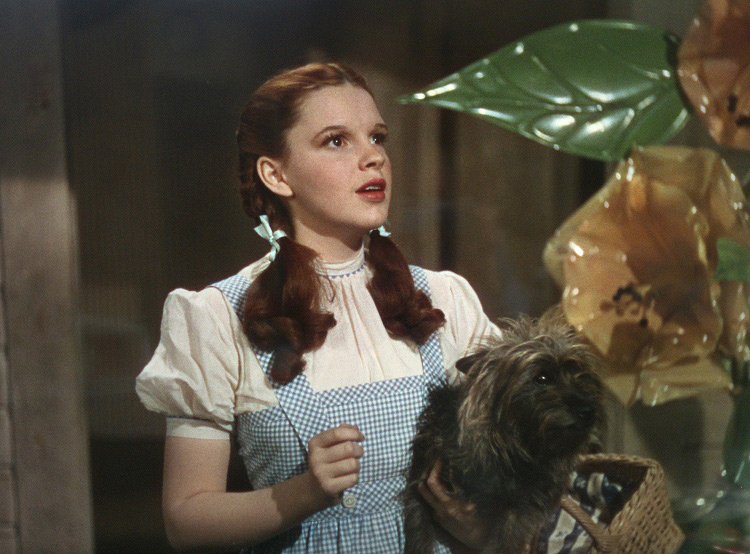 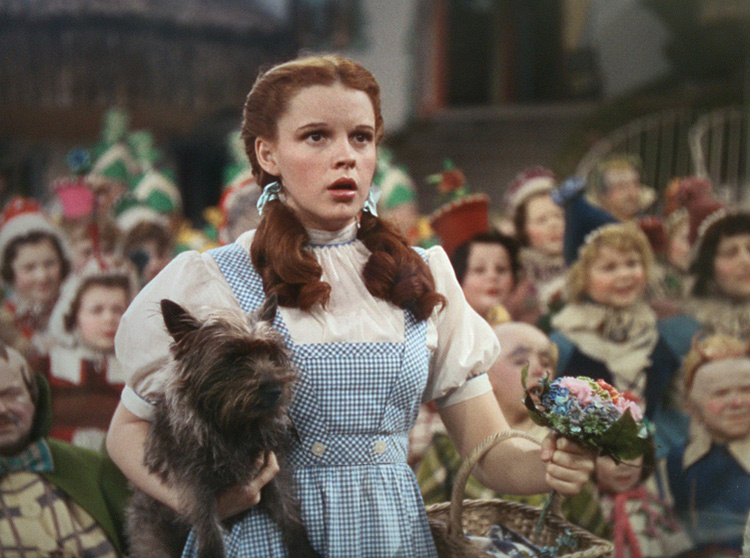 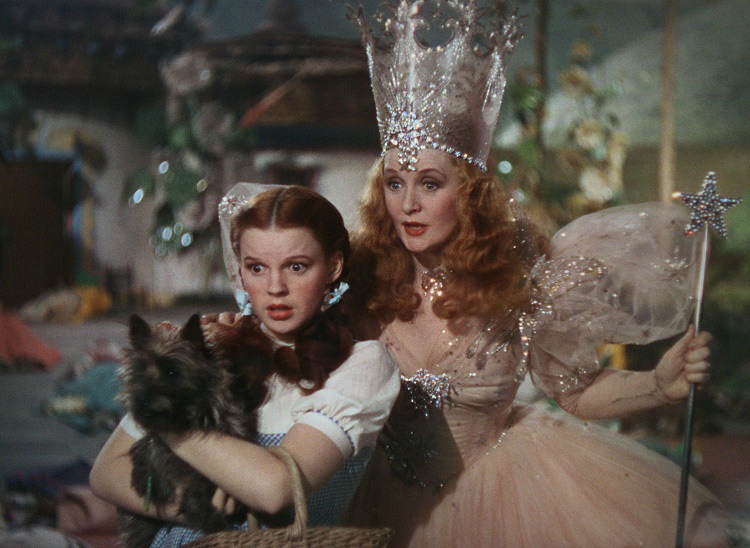 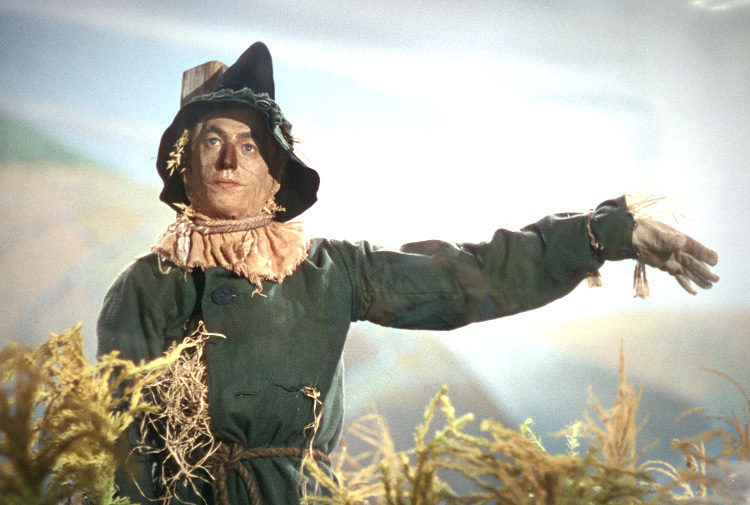 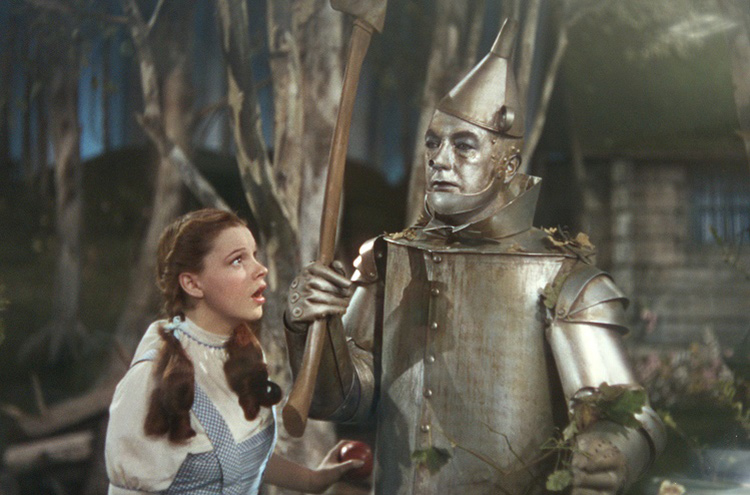 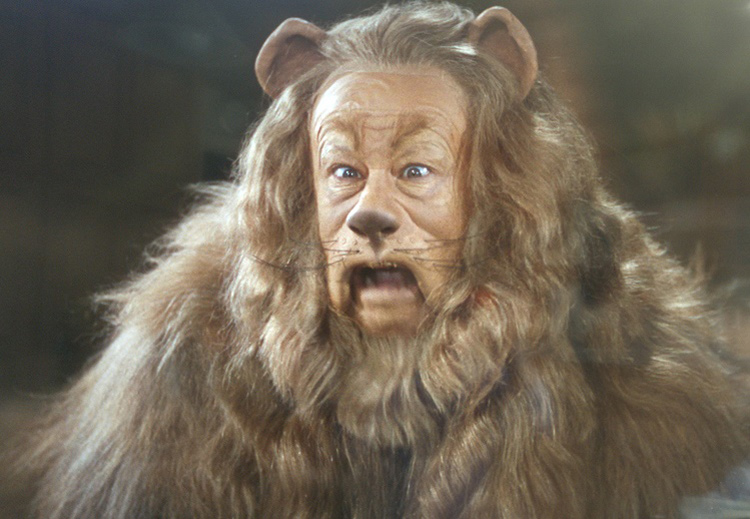 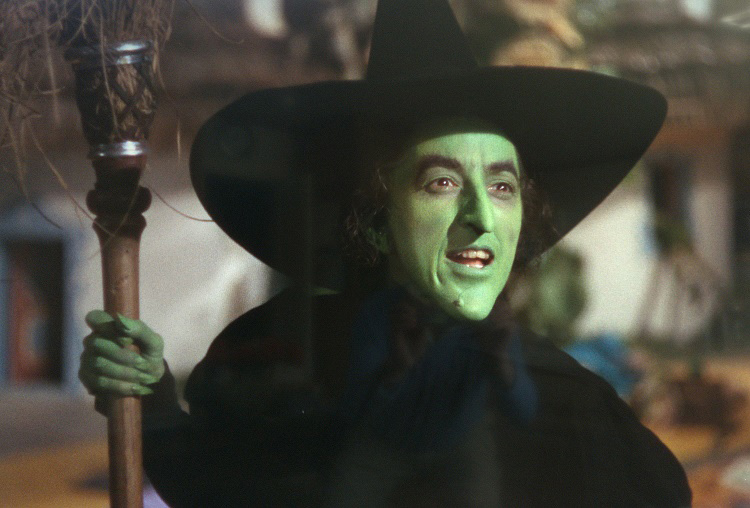 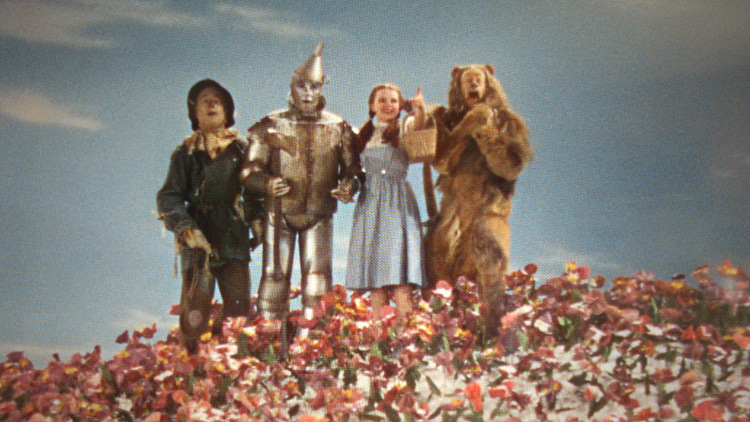 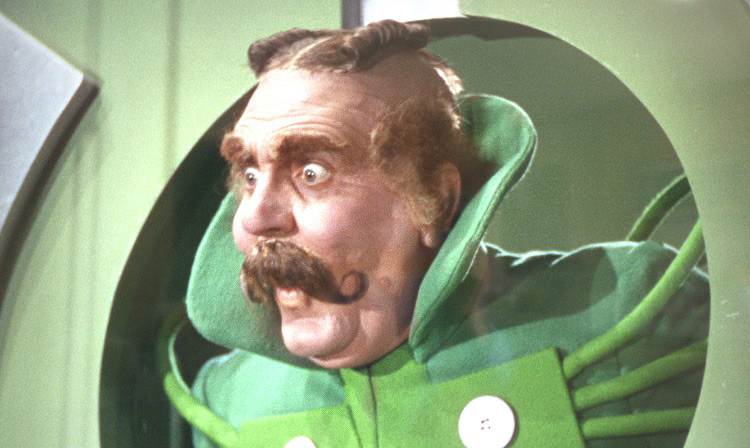 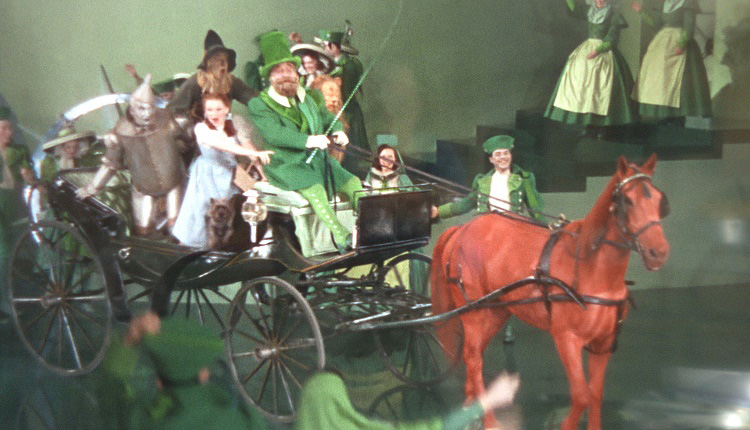 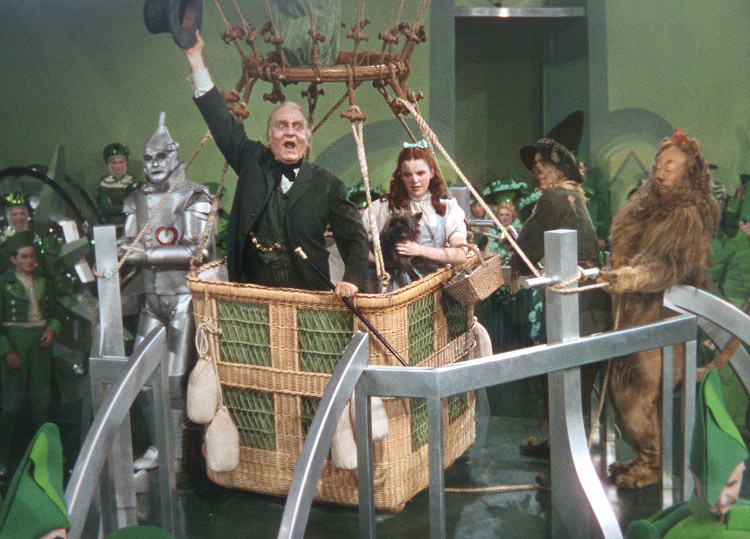 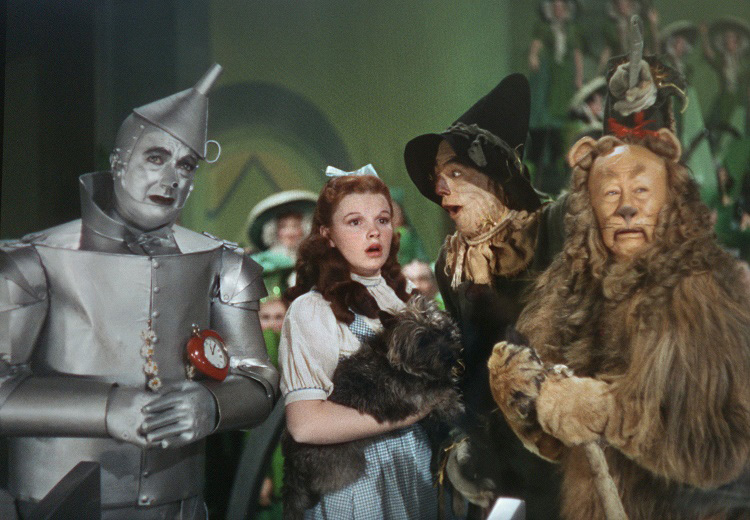 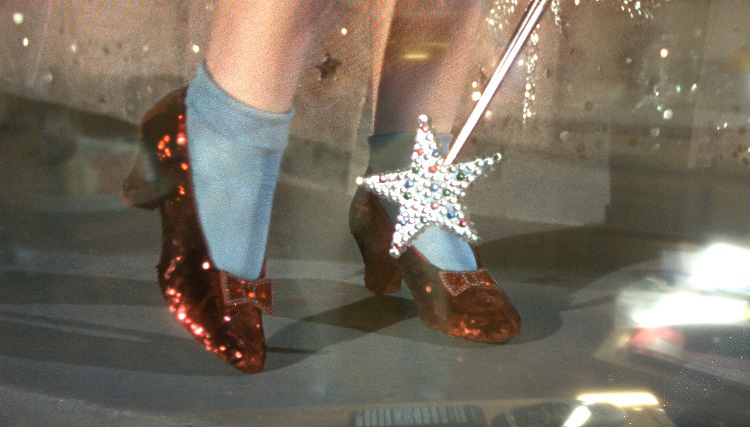 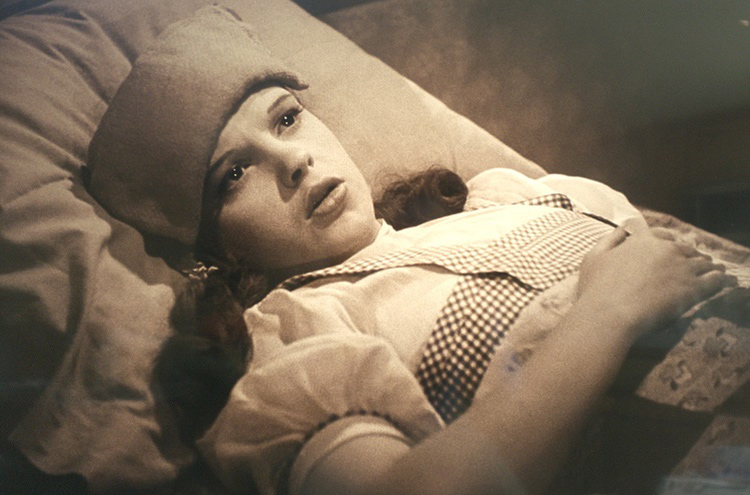 The movie premiered in Green Bay, Wisconsin in 1939, and thousands of movie goers stood around the block waiting for their turn to see it. In that year, 65% of Americans (85 million) went to the movies every week. It did not do all that well financially during the initial release, but was re-released so many times over the decades, it did ultimately give an excellent return on investment. It won three Academy Awards but lost the Best Picture award to Gone with the Wind, which had the same director (Fleming). The third Academy Award was actually a special award for the best performance by a juvenile rather than a standard award handed out every year.

Garland had a sad life after Oz, with five husbands, alcohol and drug problems, and several attempted suicides. She died young at 47 in 1969 from an apparent drug overdose. I am sure that a large part of the trauma she experienced that resulted in her difficult life was sexual assault in her youth by an MGM executive as well as by some of the Munchkins in the Oz movie (she was 16 years old at that time). She was considered to be “Miss Show Business”, the title of one of her music albums. Judy was indeed that, but for too short a time. This was a tragic end to a very talented actress and singer.

This film was treated to 4K the way all films should be treated. It was scanned at 8K, edited in 4K Digital Intermediate (DI), and released in 4K. It was not edited as a 2K digital intermediate before being upsampled to 4K for release like some other 4K movies.

As a result, the 4K movie disc is the best 4K rendition I have yet seen. I hope all 4K movies will be treated this way soon.

Ironically, the sharpness of the image is not all that great. This is due to the three-strip Technicolor process being used, which requires that the image be passed through a prism to be divided into three images of different colors on three separate strips of black & white film. The three film strips are then used to create three different colored film emulsions that are glued together onto the surface of the projection film substrate. This process is not exact, and to expect that every hair and other such fine detail match up perfectly for all three emulsions is unreasonable. The result is that fine detail varies from scene to scene. This is not the case for the first and last 10 minutes of the movie which are in black & white, where a single strip of film was used. The 4K detail there is stunning. Nevertheless, the Technicolor depth in the color portion of the movie is breathtaking

When I started watching it, the image was purple. It turns out that the movie is encoded with Dolby VisionTM, and I don’t know if all of my equipment is capable of dealing with this. So, I went into the setup menu and changed the HDR and Color Space, which eliminated the problem.

The Extras are excellent because the movie is 80 years old and has been described in many documentaries and short subject films. Some of the extras (color) are in bad shape, but others (black & white) are in 4K. Regardless, they are all worth watching.