Up NextThe Movie Studios Really Don’t Want You to Own Discs
I, like everyone else it seems, use social media.

Beyond my regular family-related online sojourns, I follow the accounts of various audio publications and writers who I find interesting, amusing and occasionally obnoxious. Gone are the bad old days where I would spend time at the local bookstore magazine rack, fingering through about a half dozen or more audio publications and later subscribing to said august audio journals when I had money of my own to spend. Now, everything, every review, every article or opinion piece is geared for online dissemination. It certainly does make getting the message out to readers much more immediate. Often the inevitable response can be just as swift and sometimes relatively harsh. And many times that ire is not so much directed to the original post at hand but as personal shots taken at respondents.

I see some writers out there in this modern environment delight in being intentionally provocative. After all, it’s no longer circulation numbers but clicks, likes, and comments that drive success in this day and age. I often don’t delve into these situations, preferring to comment on occasion where I think I can be helpful, not because I think I am somehow above it all, but more because I still enjoy this hobby. I continue to hold a sort of wide-eyed enthusiasm for audio gear and what new and exciting things the industry sends our way, even if not every single thing is even remotely revolutionary. I neither have the time, energy, or interest to get into an online knock-down, drag-out fight over someone’s opinion that I may or may not agree with. I find this social media-oriented world of today is geared more to have followers fight for the sake of fighting. That’s what gets attention and gets you noticed. Well, no thanks. I’d rather save my energy for a fight that matters. Regardless of what some say, our current condition is not something that’s new or that happened because we’re in a new political age or whatever. This has been building up for years; we now just have the tailor-made outlet for it.

So, with that in mind, consider this “Signal to Noise” Op-Ed the first in a series of pieces where I try to square some of the things I read and hear out there with some of the things that I believe, and have personally experienced, as they relate to audio.

Let’s start with this one: “You can’t accurately judge audio equipment at a show because of the small room size and large ambient noise.”

I enjoy going to audio shows. It’s a chance to see and experience all manner of equipment that I would otherwise not come in contact with. I get to see and hear what’s new and exciting and report that information to you. A number of reviewers make a big thing about not wanting to judge a speaker’s sound quality in that sort of environment, for example, because it’s not ideal. They have no control over it since it isn’t their own room, the music is unfamiliar, the hotel power is too dirty, and on and on. I get this line of thinking and I mostly agree with it in the same way that I agree with the difficulties in making meaningful judgments on equipment in a store. Speakers especially are going to sound possibly very different in your own room versus what you hear at a show. Of course, the same thing can be said about a reviewer’s listening room and the A/V magazine’s readers’ listening rooms. That being said, the notion of going to an audio show and telling you only about what I see and not what I hear, all over some perceived notion of objectivity, is kind of silly. Carrying this line of thinking to the extreme, I could, instead of attending RMAF for example, just gather up and publish every RMAF-timed new product press release with all the pictures and specs on our website and call it a day. You’d have all the raw information and pretty pictures that you could ask for and I wouldn’t have to leave the comforts of my home, and goodness knows the fine folks who run this site would be content at not having to cover another audio show expense report. 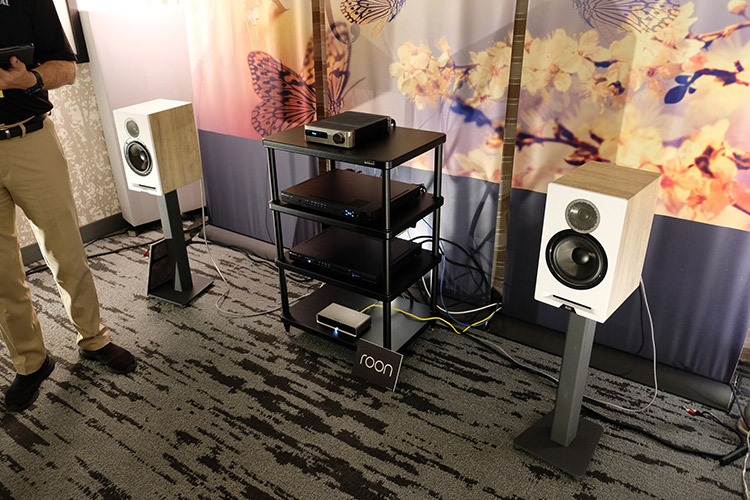 Consider this though, the average hotel room or ballroom is just another acoustically imperfect room. The rooms that most of us have our gear set up in are very likely equally as imperfect. Furnished to taste, maybe with a few treatments that we may have added, but otherwise probably not ideal listening environments. And many, not all granted, but many exhibitors at AXPONA, RMAF, Munich, etc go to great lengths to set up their wares to sound as good as possible in the spaces they have to work with. I’ll use Andrew Jones as an example. In the time I’ve gotten to know Andrew, from his stint at TAD through his current residency at ELAC, I have listened to several showrooms that he has helped set up with a variety of equipment at his disposal. Each time, he and his team have created exceedingly good sounding demos that ran the gambit from uber-expensive to easily affordable. And judging by the reactions from other show-goers, I wasn’t the only one who thought so. Now besides telling me that Andrew and his staff know what they’re doing, it also gives me a snapshot of what the gear on display is capable of. Not a complete picture for sure, but a good general idea. And it helps me figure out if it’s something that I think is worth a more comprehensive review.

Conversely, I’ve heard speakers at shows that I knew from previous experience sounded good in different environments, sound perfectly awful at a show where care was not taken in the setup. And in those situations, it tends to be pretty obvious to tell that something isn’t performing up to its capability. So taking all that into account, why, again, should I not relay this information to you? Yes, it’s foolish to pass judgment on a piece of gear with only one listen at a busy audio show, but good stuff tends to find a way to shine even in that environment. A manufacturer who wants to make a good impression will usually find a way to make it happen, and I consider it my job to let you know about it.

In the main, I go to these shows because I consider them fun little adventures and I hope that comes across to you when I write up my show reports. I think anyone who is into this hobby should try to attend at least one organized audio show at some point, just for the experience if nothing else. Where else will you get to see, hear and ask questions about such a broad variety of gear in one place? And you’ll get to meet other like-minded people, some who travel great distances depending on the show, and have some interesting conversations and possibly hear different kinds of music. Although be warned, over the years many of these rooms have had a setlist of demo songs that you will hear over and over at a given show or even a series of shows. By God, if I hear another replay of Nils Lofgren “Keith Don’t Go” live again I will throw myself off the nearest cliff! But lately, with the advent of streaming, many demo rooms will take requests from attendees if the selections aren’t too obscure. 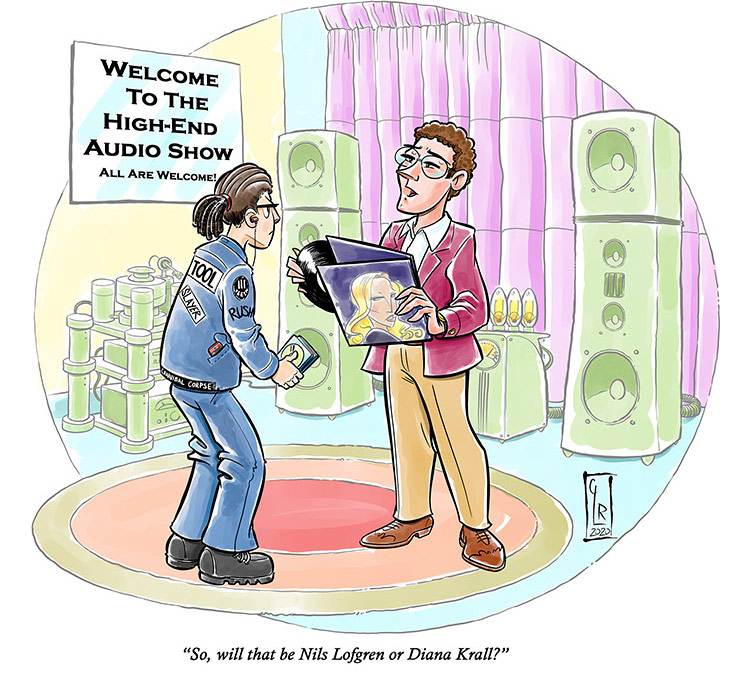 And while I am at it, I want to dispel one more little audio nugget that gets passed around by some of the supposedly more erudite audio journalists out there. “In the end, it’s not about the gear, it’s really all about the music!” I’ve heard this saying (or variations of it) I don’t know how many times from various writers over the years and I’ve come to the conclusion that it’s complete and utter rubbish. In my mind, if it were simply all about the music, then I would still be happy with the little AM transistor radio I was using in High School to enjoy my tunes. I’m not. In my estimation, this job, and this hobby, is primarily about the discovery and enjoyment of the gear, period. All kinds of gear from cheap-as-chips to true unobtainium stuff. As audio journalists, bloggers, and hobbyists, we get to try this equipment out, talk to the people that built it, occasionally measure it, and report to you about it. Of course we love music! It goes without saying that we need to love and appreciate it in order to do this job. But the dirty little secret is, we love the gear just as much, if not more. Music is more the vehicle or gauge that helps us to explore and exploit all the gear we review to it’s fullest, and I think every audio writer out there deep down inside knows that basic truth. Whether they will admit it or not, well that’s another matter.

No, every new amplifier that comes to the market is not state-of-the-art. Every new speaker, headphone, or turntable is not always the last word in whatever the marketing copy says it’s trying to be the last word in. But, to me, each one of these things is interesting for one reason or another. Whether it’s the engineering, the aesthetics, the inherent value (or lack thereof), the sheer audacity of it, or any combination of these. Audio (and to a lesser extent video) gear is innately interesting to me. Yes, I expect good equipment to both make my music sound good and also measure relatively well, respective of its category. I don’t think those aspects are mutually exclusive of one another. But, that being said, what a boring world this would be if every speaker followed the same technical design brief, every amplifier had exactly the same perfect distortion profile, or every component had the same basic design language. Creativity, variety, and diversity of what is out there in terms of audio gear help keep this hobby fun. After all, thats why I do this, not to be provocative or some sort of know it all about audio. I do this because it’s fun!