With the plethora of new high res streaming services such as Qobuz, Tidal, and Roon, I frequently have audiophiles approach me to discuss how much they love 24-bit recording playback capabilities and the improvements they are hearing.

Which begs the question: Are you really 24-bit capable in your system?

When Sony and Philips introduced the Compact Disc in 1982 consumers were greeted with a 16-bit audio format that achieved a 90 dB S/N ratio (96.33 dB theoretical). Today’s recordings are mastered at a bit depth of 24 bits while quality DACs achieve a 125 dB S/N ratio (144.49 dB theoretical).

So, you have this extra 35 dB…where does that go? At the same playback level, that’s 17.5 dB more upward dynamics with a noise floor 17.5 dB lower. This demands a more powerful, yet quieter amplifier to take full advantage.

You will enjoy a lower noise floor in your recordings and stronger crests. While that might not make your speakers play louder, the real difference is not in averaged RMS level – it is heard in an increased resolution.

What exactly is audio resolution?

My former colleague Dr. Bela Julesz, while teaching at Rutgers, explained that our perception/cerebral processing of audio and video share many similarities. Let’s recall analog VHS tape rendering a mere 260 lines on a 480 scan-line analog monitor. Now recall the increased definition afforded by 720p video and the excitement that followed with the first look at a crisper 1080p image at 2.1 megapixels. Today we can stream 4K at 8.3 megapixels into our homes and the images have taken on a new dimension in depth. This is largely due to our ability to resolve subtle shadowing in all this information. This is not a matter of just brightness or gain, but dynamic contrast.

Today’s higher resolution recordings benefit from amplifiers offering increased voltage capability and significantly lower noise floor. Speakers with large motors can generate high back-EMF on these recordings and will benefit from amplifiers with high damping characteristics. Additionally, many full-range speakers now employ two or more woofers and can demand higher current than single woofer configurations of the past.

In the spectrum shown below, you can see the difference between the music waveform at 24 bits vs. 16 bits. Notice the lower height (lower voltage) at points 1 and 2 in the 16-bit waveform. This is compression and lower dynamics. At point 3, the height is the same, and at point 4, the voltage is actually a small amount higher. This still represents dynamic compression, as the difference between points 1 and 2, and point 4 is even less.

You can click on the spectrum to see a larger version which will make it easier to discern the height differences. 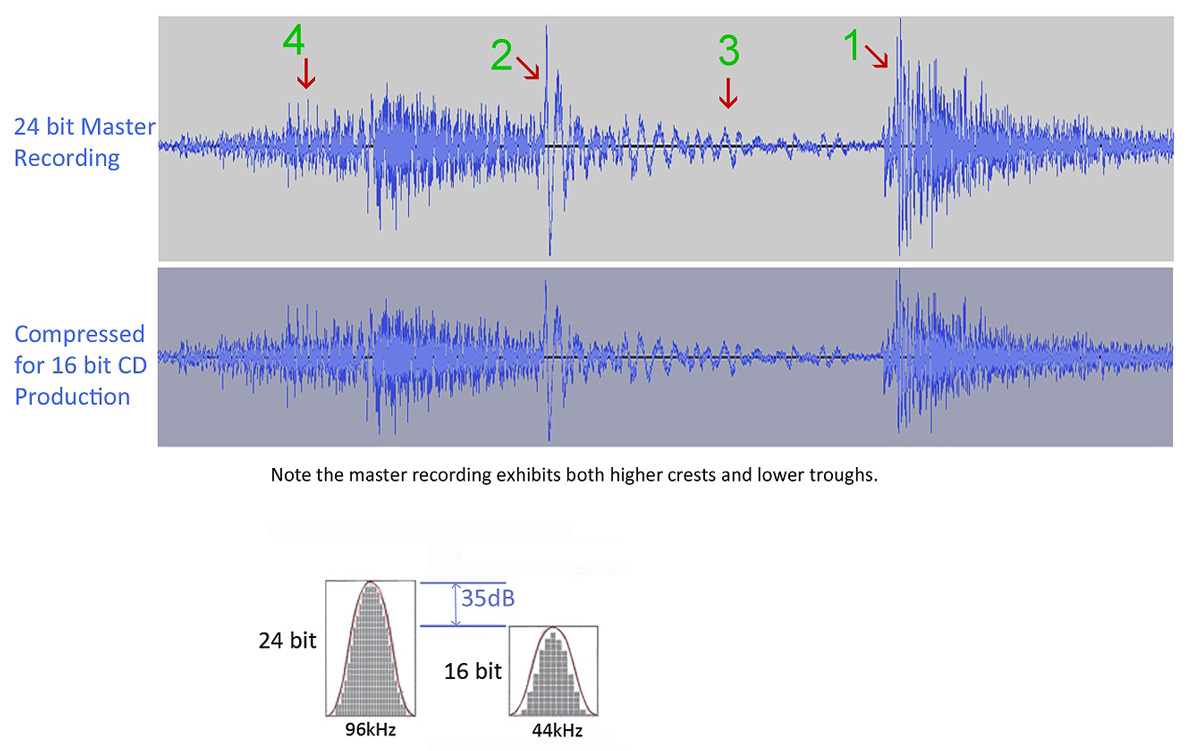 Power is the product of current (i) and voltage (V). Higher amplifier power assures the proper snap in the transients and prevents clipping that can damage high-frequency drivers. Higher power means dense musical arrangements will avoid the smearing, strain, and the inevitable distortion as complex passages reach higher levels.

What increase in amplifier voltage is required to maximize the performance potential of 24-bit over 16-bit?

Let’s first recall that the 35 dB realizable increase in total dynamic range difference benefits the noise floor greatly in 24-bit recordings. For calculation purposes, let’s assume that fully half of the 24-bit overall level advantage is allocated to a reduction of the noise floor. Therefore only 17.5 dB of this increase of 35 dB in dynamic range is allocated to potential upward dynamics.

If a 16-bit recording is maximized on a four-ohm pair of speakers driven by 80 watts, you would need 750 watts to realize the potential increase in dynamic articulation afforded by 24-bit while enjoying a music lower noise floor.

If you thought loud car crashes, rocket launches, and dinosaur footsteps are all high power is good for, you might consider the benefits of lower noise floor and increased dynamic resolution.

Legacy’s i·V Series amplifiers are the most powerful home theater amplifiers to date. Featuring state of the art ICEedge® technology, the powerhouse delivers up to 1kW into 4 ohms at less than 0.005% distortion to each of its channels. The elegant amplifier series operates at nearly 80% efficiency at the rated output and delivers more than 600 watts into 8 ohms all channels driven while remaining stable into low impedances.

Executive Q & A with Bill Dudleston. 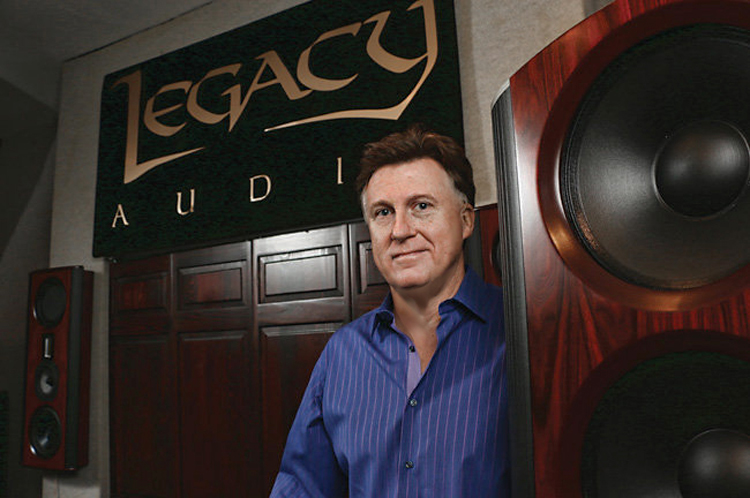 Bill Dudleston is President, founder and Chief Engineer of Legacy Audio, a high-performance audio and home theater equipment manufacturer located in Springfield, Illinois. Bill is a member of the Audio Engineering Society and the American Institute of Chemical Engineers and holds numerous patents for various circuit topologies and acoustic alignments.